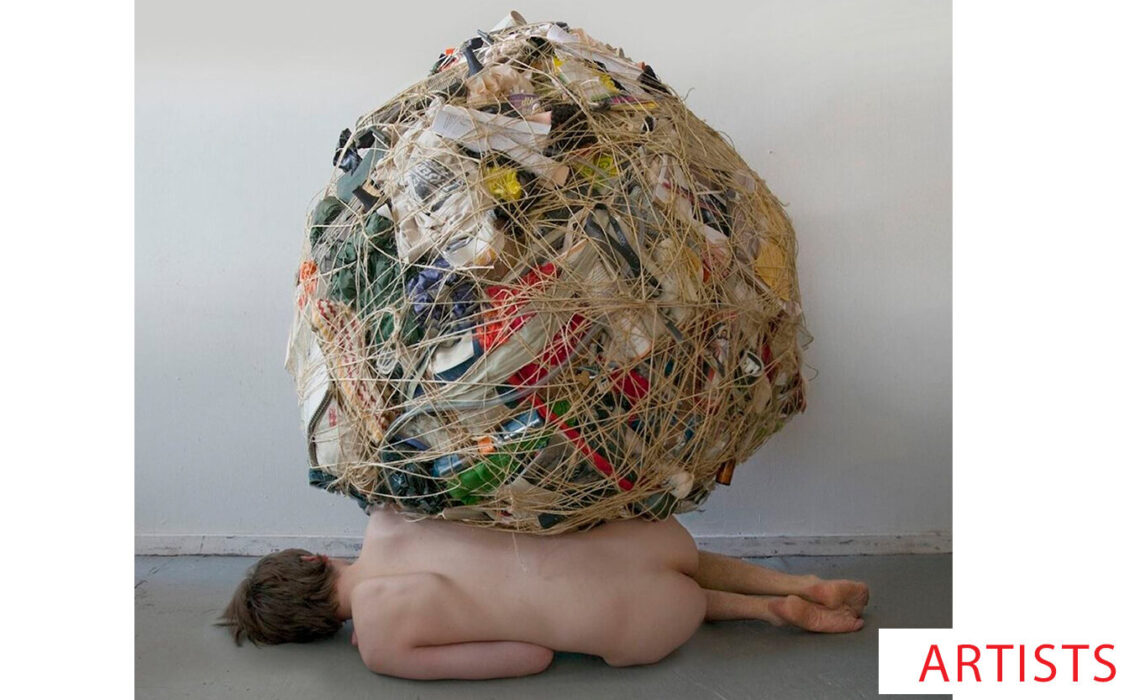 Art in the Anthropocene: What Can Art Do Against Climate Change?

In 2015, writers and researches Heather Davis and Etienne Turpin wrote the famous book Art in the Anthropocene: Encounters Among Aesthetics, Politics, Environments and Epistemologies in which they proposed to understand the geologic epoch of the Anthropocene from an aesthetic point of view by exploring the relationship between contemporary art and knowledge production in an era of ecological crisis. Six years from it publication, issues around climate change and ecological crisis not only have increased but becomeing even more urgent to talk about.

The big question is: Whan Can Art Do Against Climate Change? In a time when the nature and the ecological world has dramatrically changed because of the actions of the human beings, what can we excpected of an activity based on the human such as art? Are we as human beings are capable of revert our onw mistakes on eart? This kind of questions keep floating on the air since the geologic epoch known as the Anthropocene was set in 2000 by Paul Crutzen. Artists has joined to the conversation from some many ways, trying to provoke an impact on the understanding of the people.

That is the case of Ackroyd & Harvey, whose work has been involved with the intersection bewteen art, activism, architecture, biology, ecology and history. From June 16 to 25, the artists collaborated with the Nigerian poet Ben Okri on an envolving work in the Tate Modern’s Turbine Hall. The organic carpet was made of grass pelt with 16 metres long from a bed of woven hessian. Over the surface was printed: “Can’t you hear the future weeping? Our love must save the world“, a phrase by Okri in response to the climate emergency. On the final day, a procession from the Turbine Hall took the work to the shore of the Thames River. 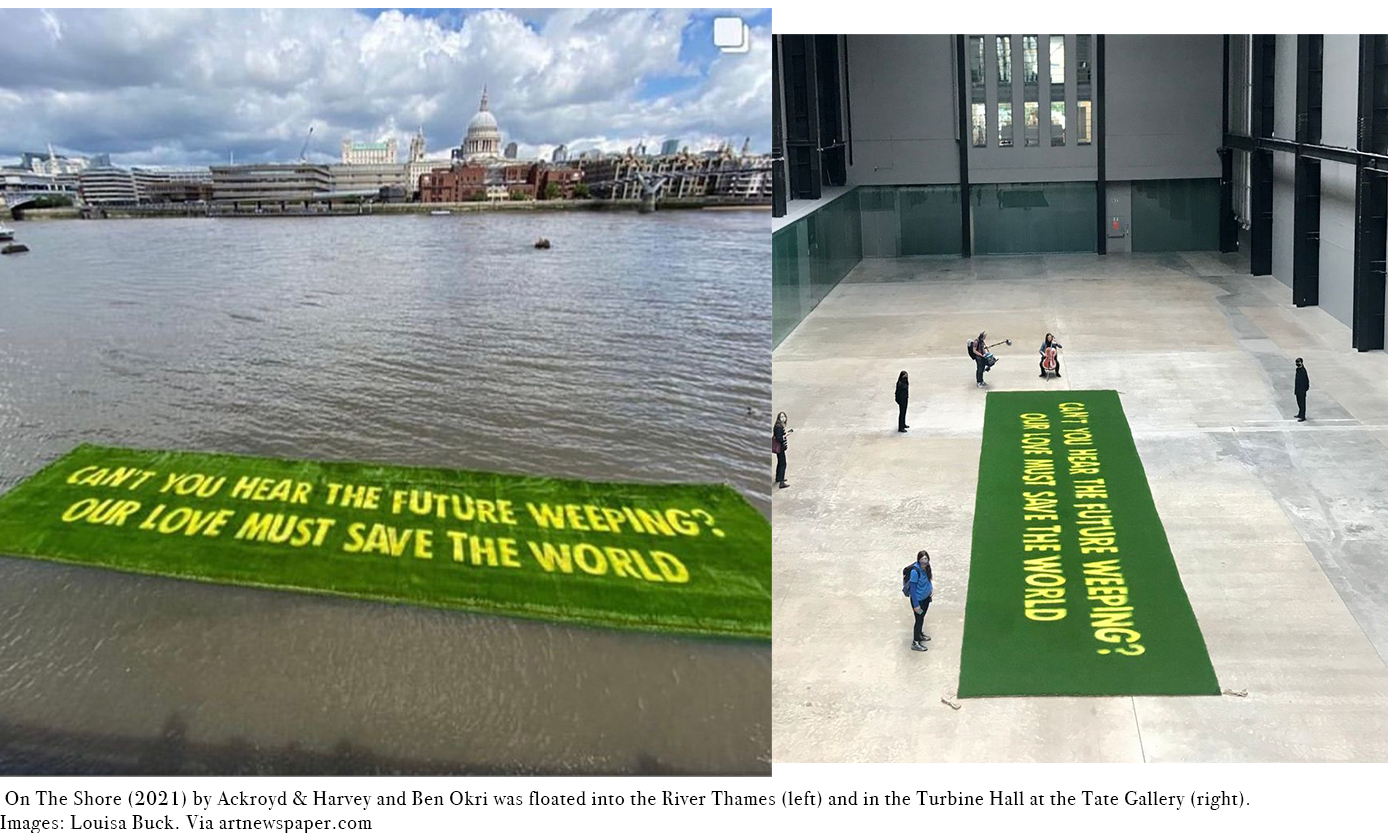 A couple of days ago, film director Iva Radivojević launched for free her most recent film Utuqaq (2021), a poetic visual essay about an uncertain future. 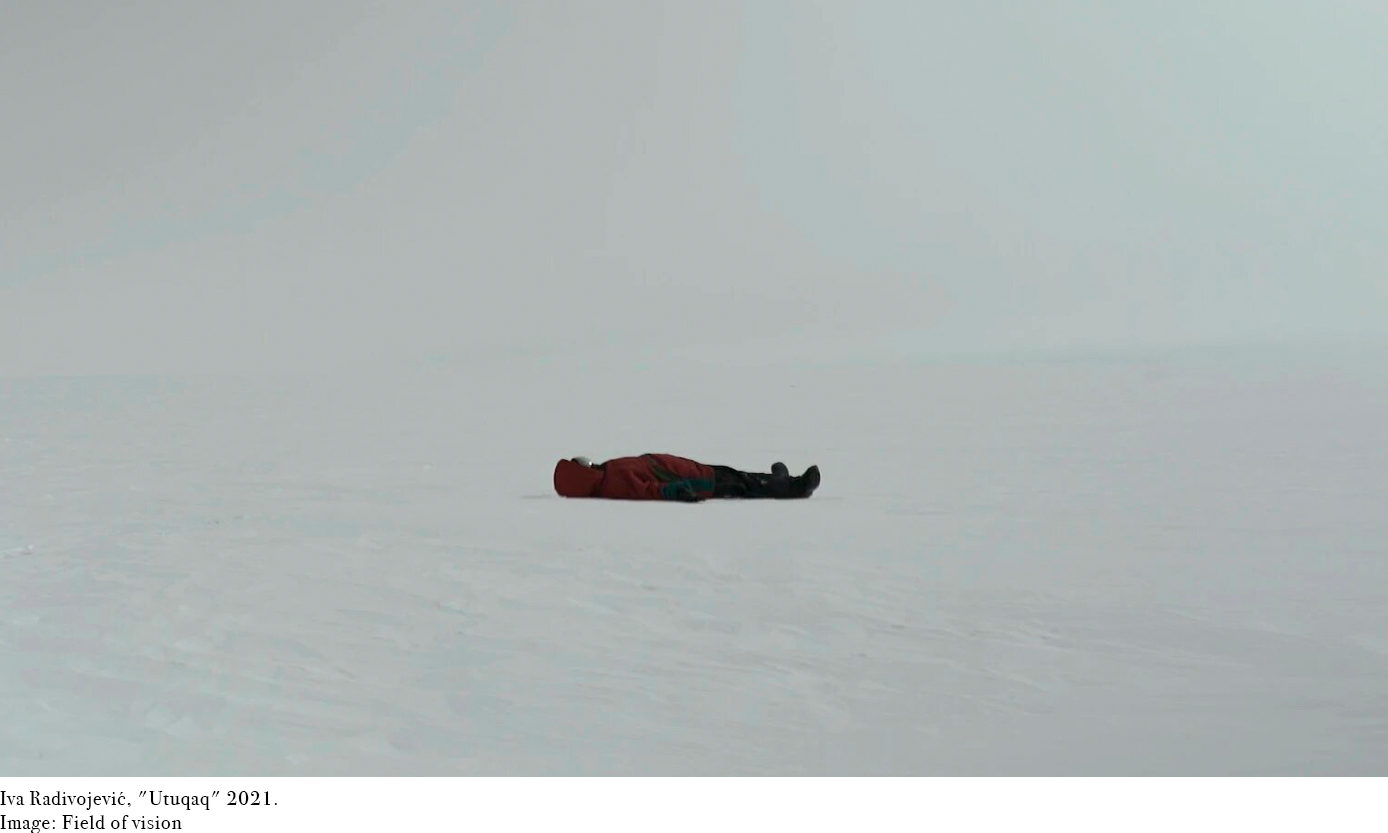 As four researchers embark on an expedition to drill ice cores in the Arctic in subzero temperatures, the presence of these visitors is witnessed by Utuqaq—ice that lasts year after year. With a memory that extends millions of years into the past and a present form that shapeshifts in intricate patterns over the surface of the vast white landscape, this beautiful and vital Arctic ice is facing an increasingly uncertain future as the world warms.

You can see the film on Field of Vision:

Lastly but no less important, Anthropocene can also be understand from the a colonialist point of view. In his his/her work  Anthropocen Teen, Vick Quezada points out the impact of the last ecological era on the human bodies. In an interview with the Boston Globe, Quezada said that  in this “hybrid queer indigeous Aztec dinosaur… I’m thinking about the age of the Anthropocene, about colonialism and imperialism and this agenda for death and the way that it places value on people”. 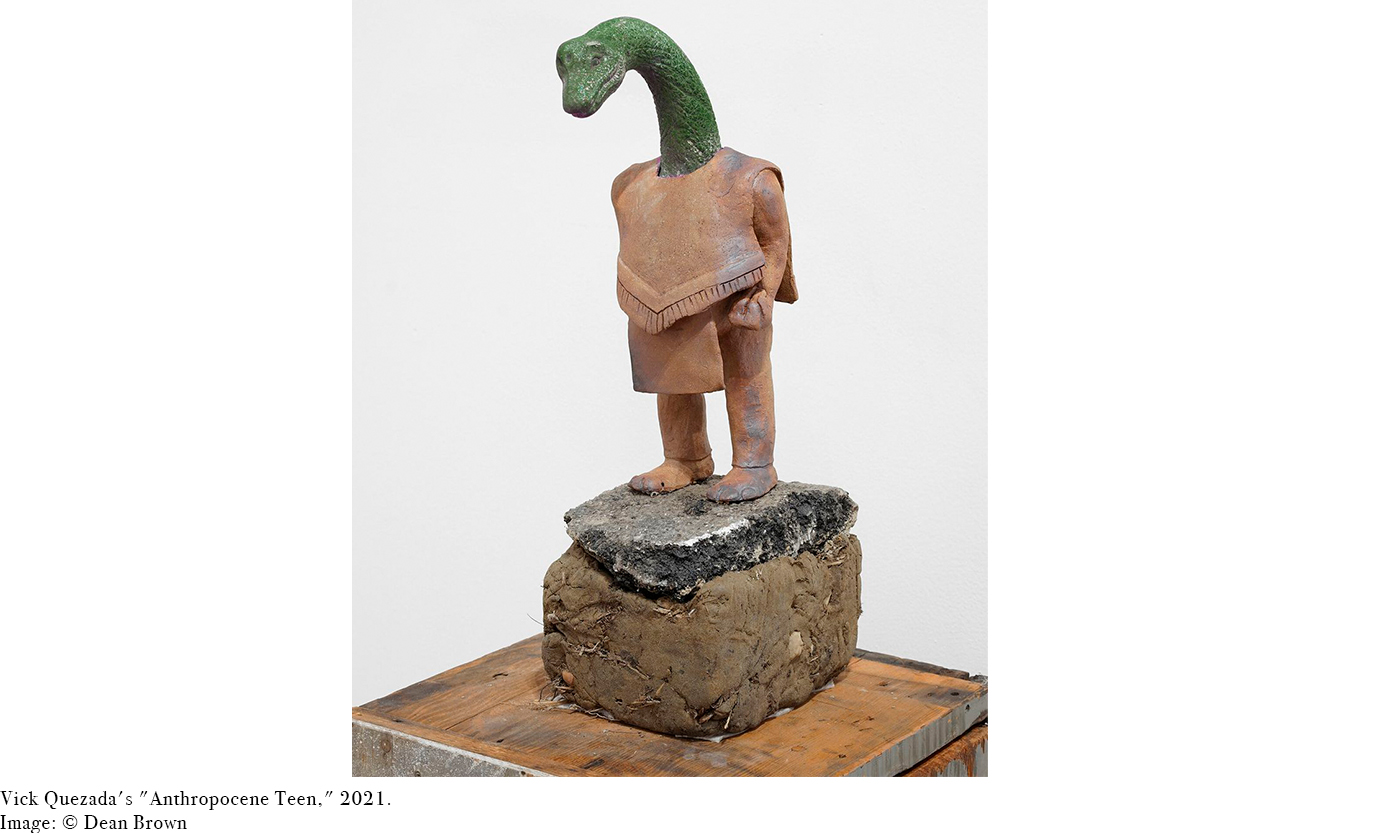 These are only three examples of the recent and growing interest of the visual arts in questioning our actions in the world. There is a lot more to think, in the meanwhile art is able to talk about the Anthropocene for we to not forget.