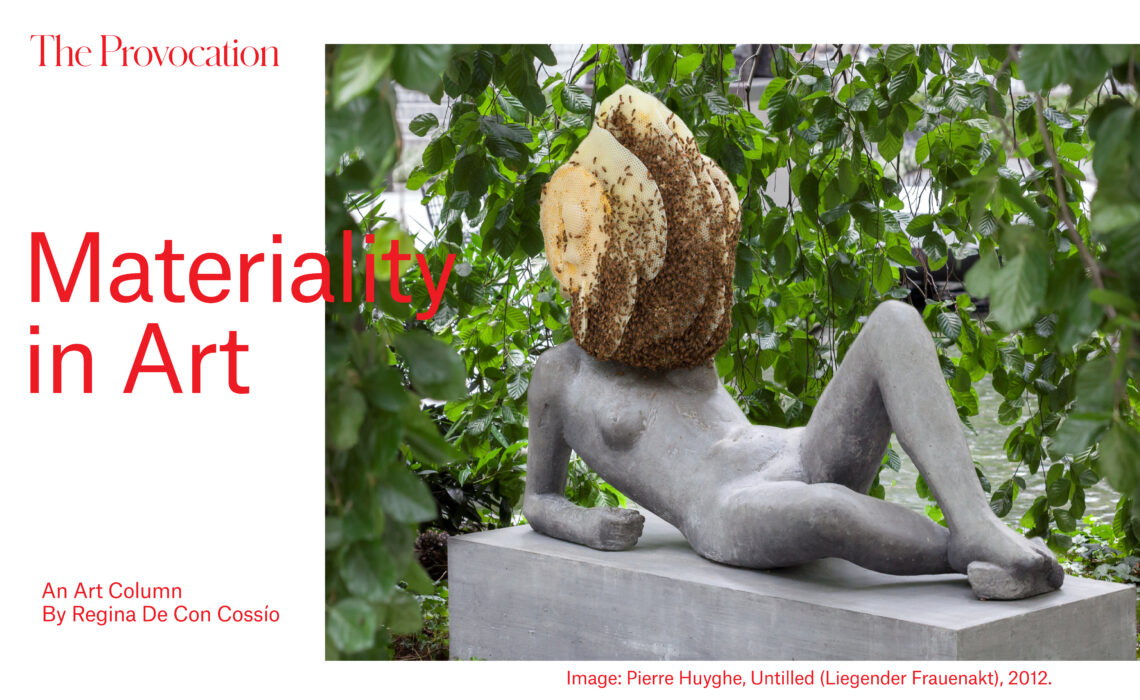 The Materiality of Art

Materiality refers to the property of being, related or consisting of a material. It involves the use of ‘materials’ in making, forming or creating a thing. This definition may not have a general acceptance since the term ‘materiality’ has separate definitions in diverse professions and fields. Nonetheless, materiality may also refer to the matter rather than the form. In art, however, the definition of materiality expands – to a reasonable extent- from the generally accepted definition.

Let’s get this as clear as possible.

According to a school of thought, the materiality of art involves the matter used in forming art (be it painting, sculpture or another visual art). The materiality of any art is said to have an impact in its meaning for a spectator. This concept implies that the purpose, information or feeling, and expression created by an artwork is a product of both its form and its matter – materiality. Manifestations and meaning of art depend on the thing that is involved in creating the art. In simpler terms, the materiality of any art is a criterion for giving sense to any art piece.  It is not only a question of how the substance of the art’s message intersects with the society and give rise to new ideas but the revolution that comes through the medium itself. When considering an art, we should also take into account the materiality through which it manifests itself.

The concept of materiality says that, if we are to change the matter from which an artwork is created, then we may have invariably changed its meaning (or message) and what it seeks to express.

What importance is materiality?

In the present state of the art, concerns on the significance of materiality of artwork keep coming up. The materiality of artworks seems to have or possess little to no value. Art is now valued based on its concept – conceptualism of art. Conceptualizing artworks gives credit to art as an idea, and little to no reference to the matter from which are was made. As more and more works get produced in the studio, art is merely an object in the eyes of many; a phenomenon referred to as the dematerialization of art.  With contemporary art, this seems to be more prevalent. Does this imply that materiality has little to no significance in present-day art? That may be the case, with less and less defining the message of art as a product of its materiality.

There are thounsands of art works whose materiales are essencial for their concept, composition and meaning. Actually, there are many artists that puts special attention to the means they choosen to achieve not only the form but the context and the intention of their art. Let see some examples.

Mexican Artist Marcel Armas (Durango, 1976) created an inverted map of Mexico with a complex mechanism. The piece is an industrial machine with a lubrication system that controls the flow of crude oil. This flow is continuous and the machine slowly ends up overflowing. The importance of their materials rests on the metaphor Armas points out regarding the flow of enery in a country like Mexico with a long history with crude oil to the point that this natural resource has chaped the country’s landscape. However, the allegory is also related with a global society obssesed with the progress within a context of failure, insecurity and incapacity. 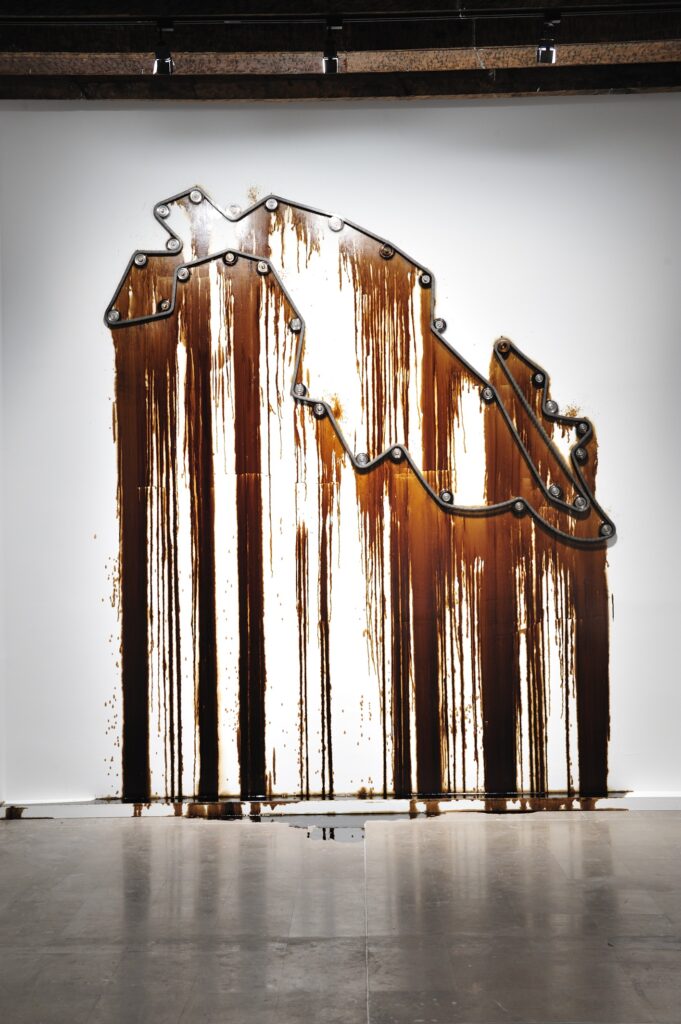 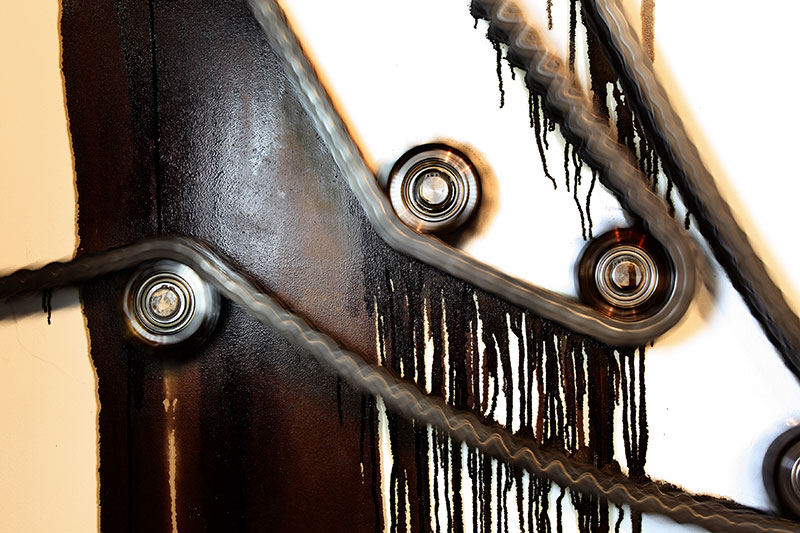 For this book, Brazilian-Portuguese artist Artur Barrio (Oporto, 1945)  thematizes the material of raw meat as the basic material for a book. Living and working most of the time in a country considered as from the “third world” (Brazil), Barrio was interested at some point of his carrer in material that is accessible and affordable: toilet paper, meat, urine, cloth, bits of nails, fish, etc. Barrio’s work becomes ephemeral and non-institutional. In this case, Livro de Carne presents an interesting game between the objectual and the ephemeral by using raw meat to represent a history book “made” with the meat of the Brazilian people. However, by being made with perishable material, Livro de Carne is only accesible by photo documentation, which is algo a interesting gesture about how history and its narratives is sometimes vanished. 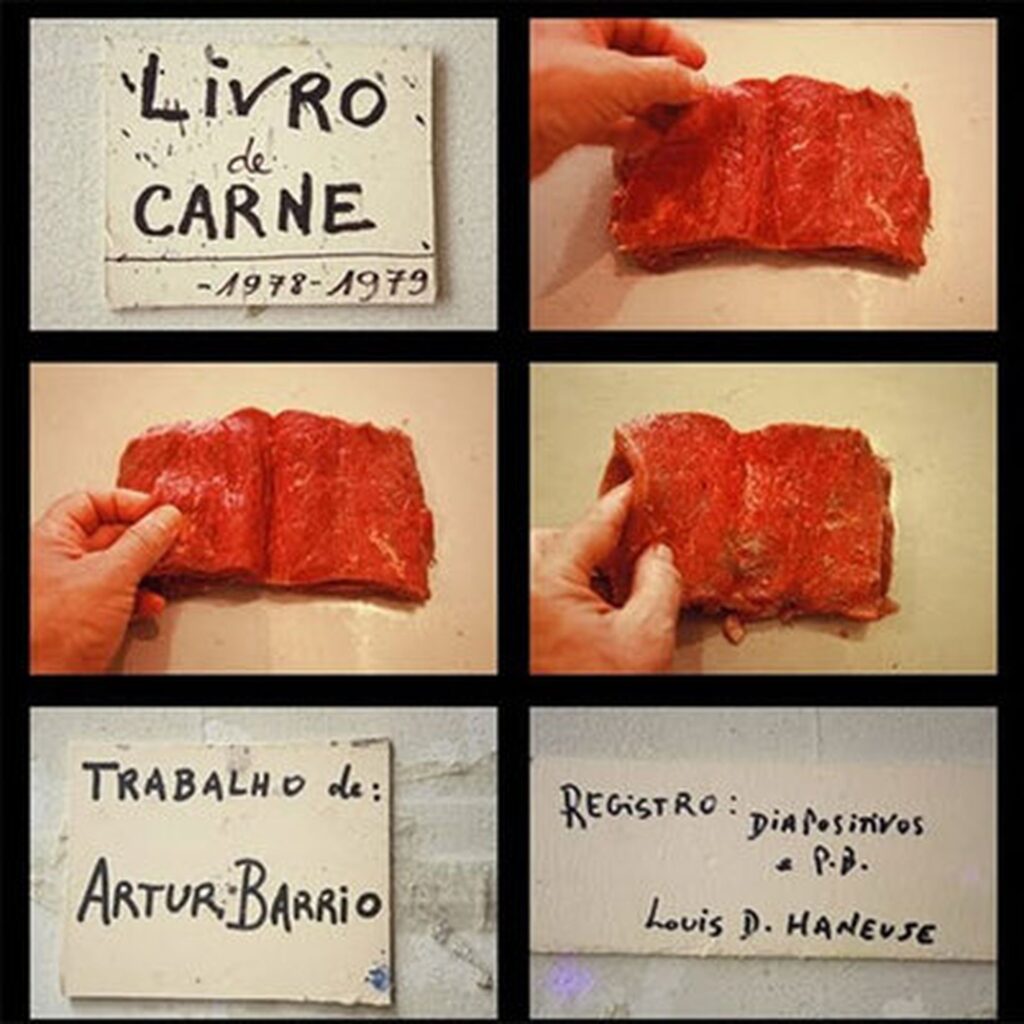 For this piece, French artist Pierre Huyghe incorporates a live colony of a gentle breed of bees, which serves as the head of a concrete cast of an idealized female nude.The living beehive serves as the nude’s head, but also, by extension, her brain. The collective thought processes of bees—their “hive mentality”—have long been studied in relation to human political and social organization. Untilled (Liegender Frauenakt) [Reclining Female Nude] explores these affinities and emphasizes the ancient, symbiotic relationship between humans and honeybees, which, in building their hive, collaborate in the creation of the sculpture. 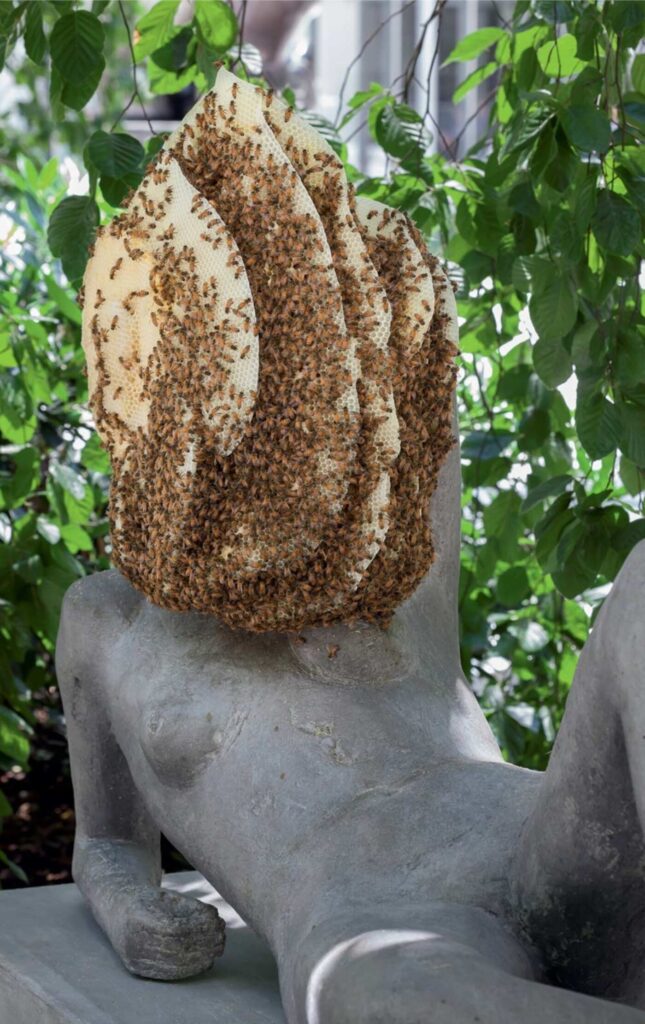 British artist and Mexico-based artist Melanie Smith (Poole, 1965) worked for several years with objects founded and collected from street markets in Mexico City. From ropes to toilet seats, those objects are commonly undervalued due to their low coast and plastic-made fabrications. There are, undoubtely, materials not considered as part of master works of art. However, Smith tried to cread a landscape of a territory where the street market are essential for the local economy. 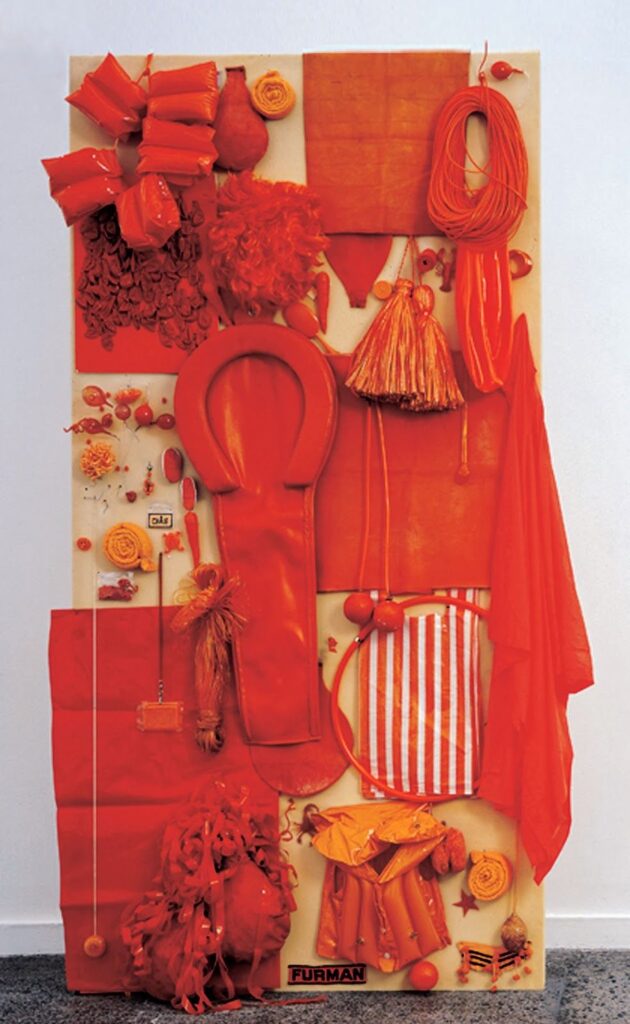 This piece juxtaposes an over-life sized classical statue of the Roman goddess of love, beauty and fertility, with a large pile of brightly coloured, discarded clothes that are heaped on the floor. The Venus statue is positioned with its back to the viewer. The figure’s face and body press lightly against the pile of fabrics that rises up before it, so that the front of the statue is hidden. Considered as part of the Povera art-movement, Italian artist Michelangelo Pistoletto  (Biella, 1933), used “poor”, non-idustrial and humble materials to create works of art. In this case, Pistoletto superimposes two apparently contradictory elements for art: on the one hand, the reproduction of a traditional Venus that symbolizes the high beauty values of art with a lot of discarded clotes. Thus, beauty and “ugliness” are mixed in such a critical way that question the values of art but the society as well. 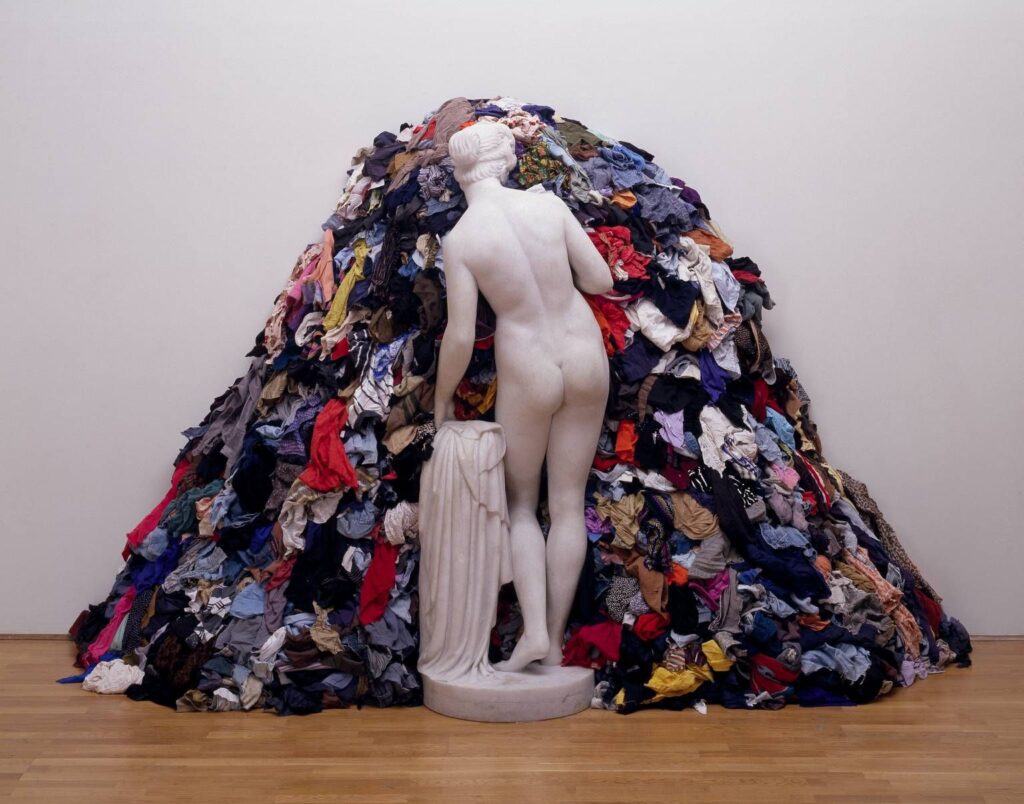 Michelangelo Pistoletto, Venus of the Rags, 1967, 1974. Marble and rags of discarded clothes