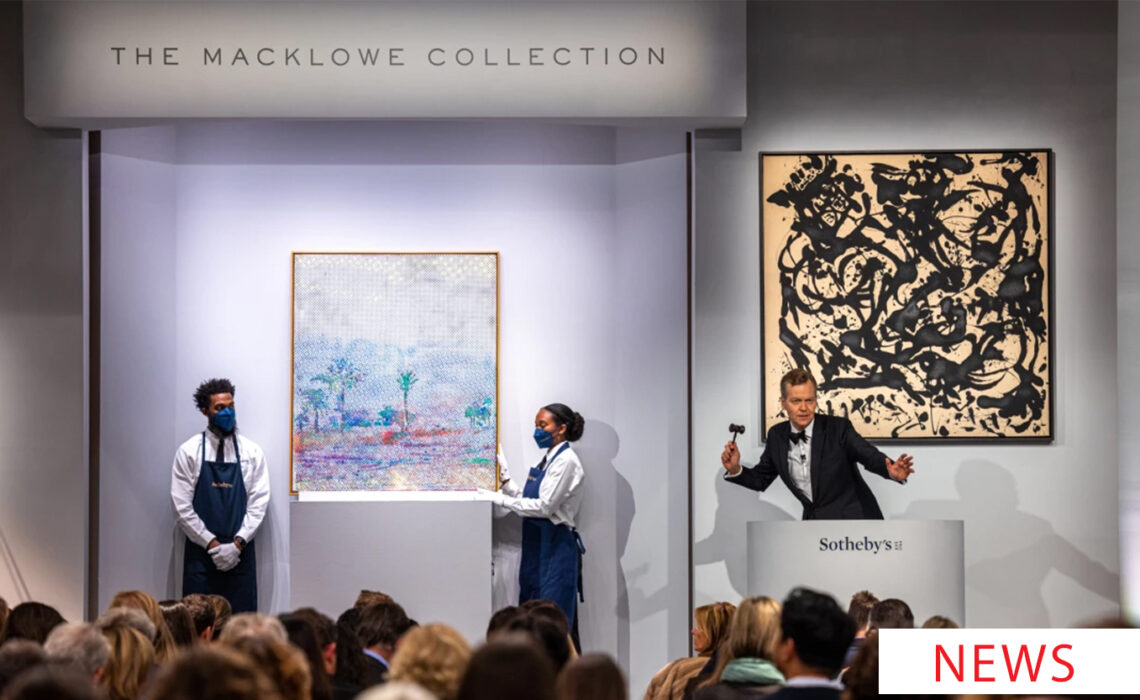 The Macklowe Collection became last night (May 16) the highest valued art collection ever sold in auction history for $9222.2m. After a first auction hosted in Novemeber 2021 by Sotheby’s, which part of the collection reachead a total of $676.1 million, yesterdad the second part of a collection reached an extraordinary and historical record for an auctioned collection.

The highly anticipated sale of The Macklowe Collection past November realized a total $676.1 million on the strength of fresh-to-market masterpieces by the most important artists of the last 80 years. Highlights of the evening included Mark Rothko’s No. 7, which sold for $82.5 million, Albert Giacometti’s Le Nez, which achieved $78.4 million, Jackson Pollock’s Number 17, 1951, which more than doubled its low estimate to achieve $61.2 million, a new artist record, and Cy Twombly’s monumental Untitled, which sold for $58.9 million.

By that time, the collection became the most valuable single-owner auction ever staged. Nevertheless, in a second part of the auction held last night in New York, the collection reached sales of $208.7m, establishing a historical record that even exceeds the value that the Peggy Guggenheim Collection reached at the time. In total, the Macklowe Collection, which was put up for sale after the divorce of the collectors – and until last November owners of about 70 works – Linda and Harry Macklowe, reached the figure of $922.2m

Each of the 65 auctioned works is a consummate masterpiece; together they constitute an unrivaled ensemble that meticulously traces the most important art historical achievements of the last 80 years. Acquired over the course of half a century, the collection reflects decades of pursuit, honing and refining, driven by immense patience and an innate understanding of quality. ranging in date from the 1940s to works painted less than a decade ago, and including masterworks by Alberto Giacometti, Mark Rothko, Cy Twombly, and Andy Warhol. The sale also shines a light on a distinguishing feature of the collection as a whole: its enormous depth. Many artists – among them Jeff Koons, Brice Marden, Agnes Martin, Sigmar Polke, Gerhard Richter, Cy Twombly and Andy Warhol – are represented by multiple works, each one marking a distinct and critical moment in their respective careers, and together forming an insightful portrait of the artists’ evolution over time.

Gerhard Richter is among those reappearing, represented in this sale by Seascape, an extraordinary large-scale painting from 1975, capturing the magisterial beauty of the natural world, while at the same time blurring the distinction between photography and painting until they are almost entirely indistinguishable (est. $25-35 million). Andy Warhol returns here too, represented this time by one of his very final works – a monumental self-portrait painted as he contemplated his own legacy and status alongside those of the pantheon of stars who had peopled his works (est. $15-20 million). Not seen since it was exhibited for the first and only time at Anthony D’Offay’s seminal 1995 exhibition, Vanitas: Skulls and Self-Portraits by Andy Warhol, the painting is joined in the May edition by another seldom-seen work, Mark Rothko’s meditative, richly-coloured Untitled from 1960 – a critical moment in his career (est. $35-50 million). Following the success of the two paintings by Willhem De Kooning offered in the November sale (Untitled XXXIII, from 1977, which made $24.4 million; and Untitled IV, from 1983, which made $18.9 million), the May edition will include two further important works: one, Untitled, from 1961, and another, Untitled XIII, from 1984.

News
Young Artists for Sale: Do Auctions Validate Art?
Editorial Selection
Why to Collect Art? 5 Books To Delve Into The Importance Of Collecting.
Art History
5 Art Collections in Mexico: A Very Short History