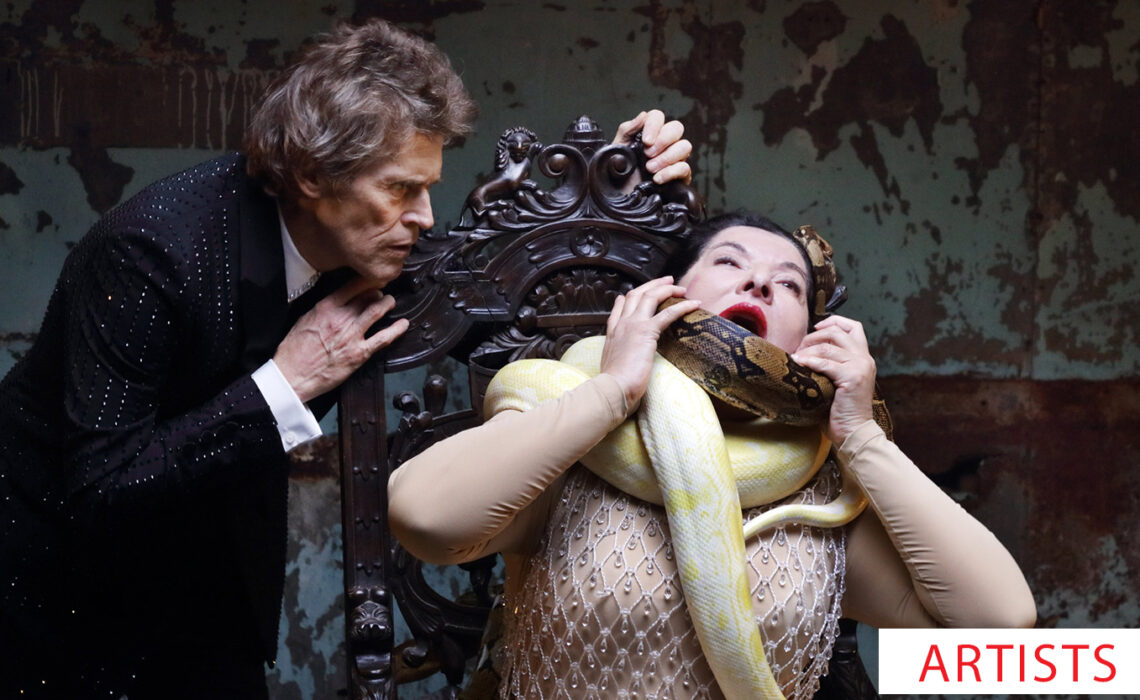 After thirty years of imagining an opera and performance project dedicated to one of her mos important influences, Marina Abramović is presenting The Seven Deaths of Maria Callas, a new film – opera performance based on the life of American opera singer Maria Callas.

For thirty-one years, I have wanted to make a work dedicated to the life and art of Maria Callas. I have read all of her biographies, listened to her extraordinary voice and watched her on film. A sagittarius, like me, I have always been fascinated by her personality, her life — and her death.

Like so many of the characters she created on stage, she died for love. She died from a broken heart. Most operas end with the woman dying and more often than not, it is because of love. She will leap from precipices, burn, be strangulated stabbed or simply go mad. 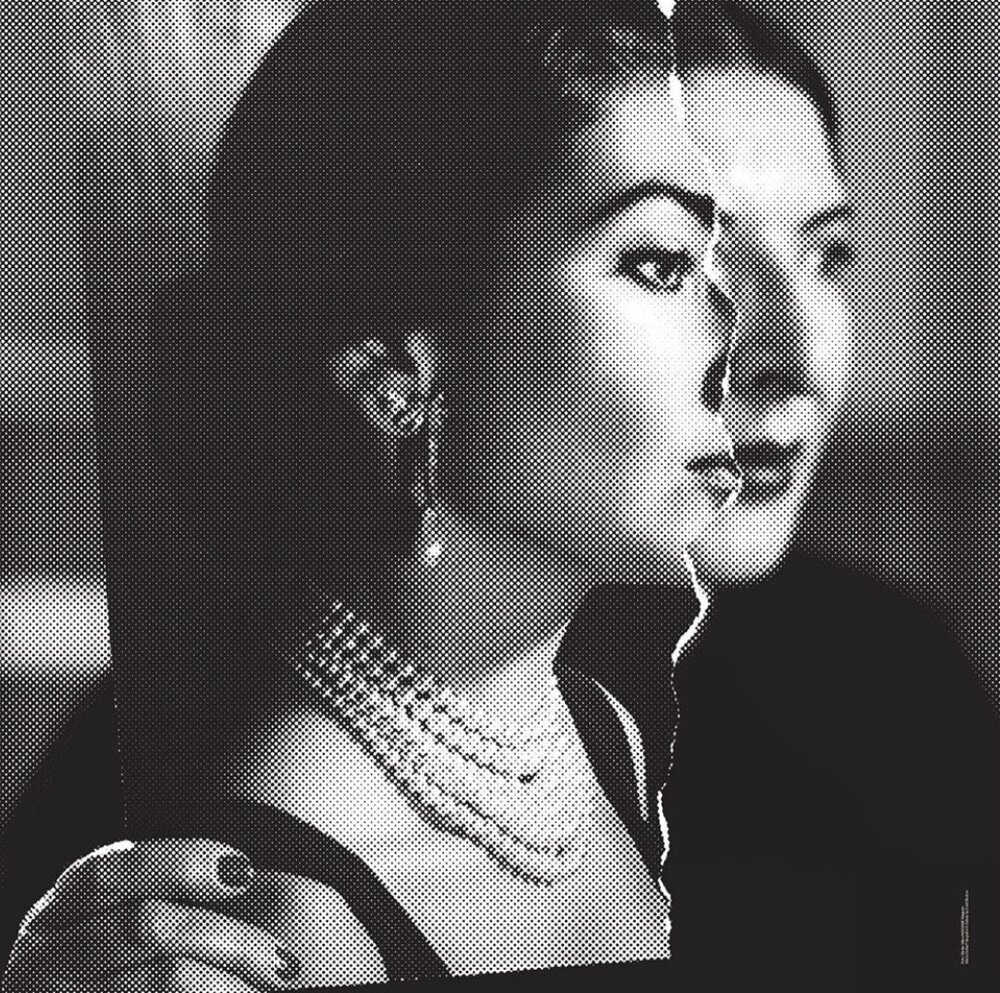 We already know: Marina Abramović is Marina Abramović, the greatest artist of performance of all times. So she has the power to do and create whatever she wants: from dancincg with Jay Z and collaborating with Lady Gaga, to play Maria Callas in an opera performance film completely conceived by her. The Seven Deaths of Maria Callas is the latest project of the start peformer in which she acts out the tragic deaths of seven operatic heroines, each one performed together with 7 opera singers that sings the soundtrack of Callas. 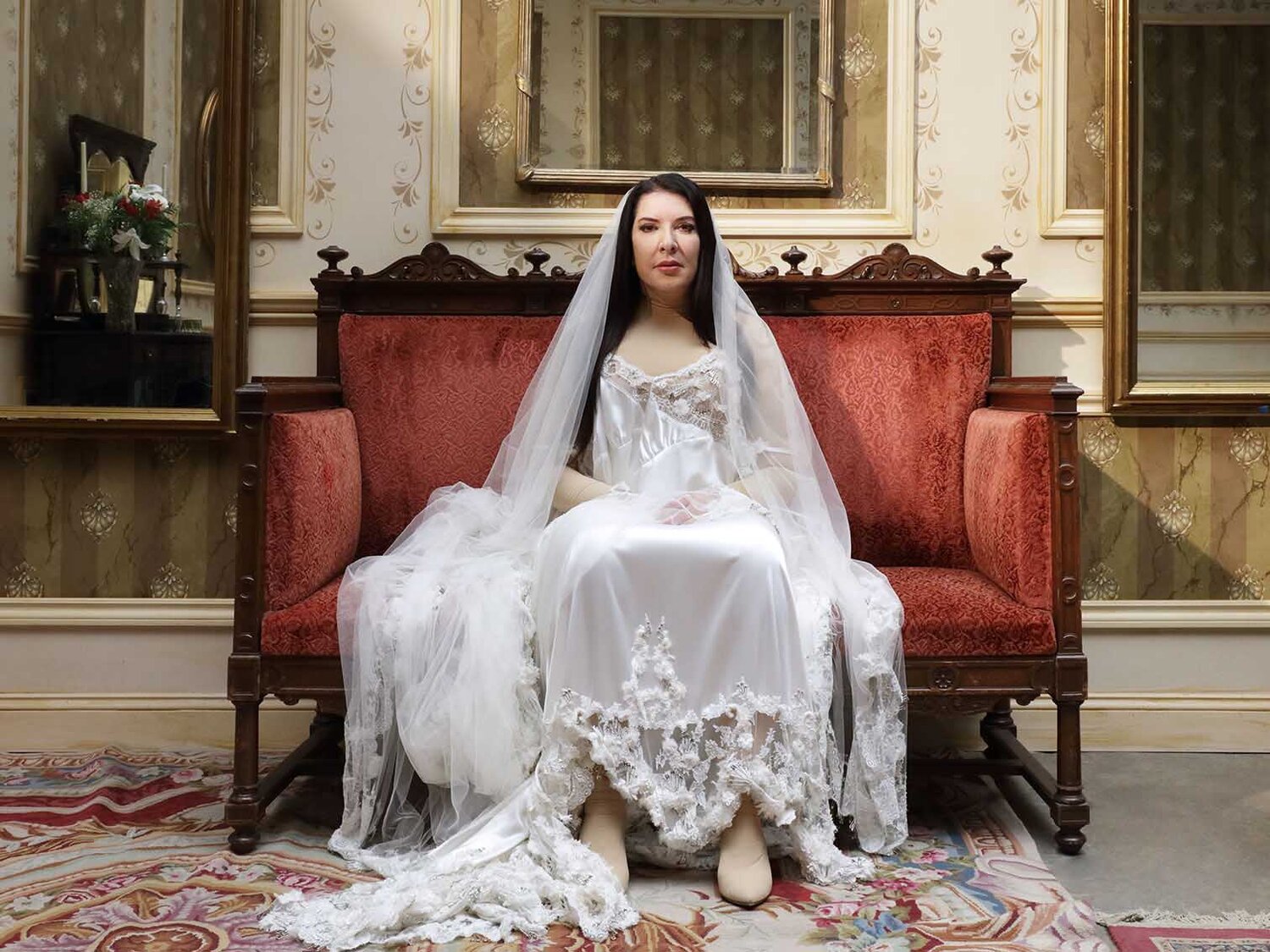 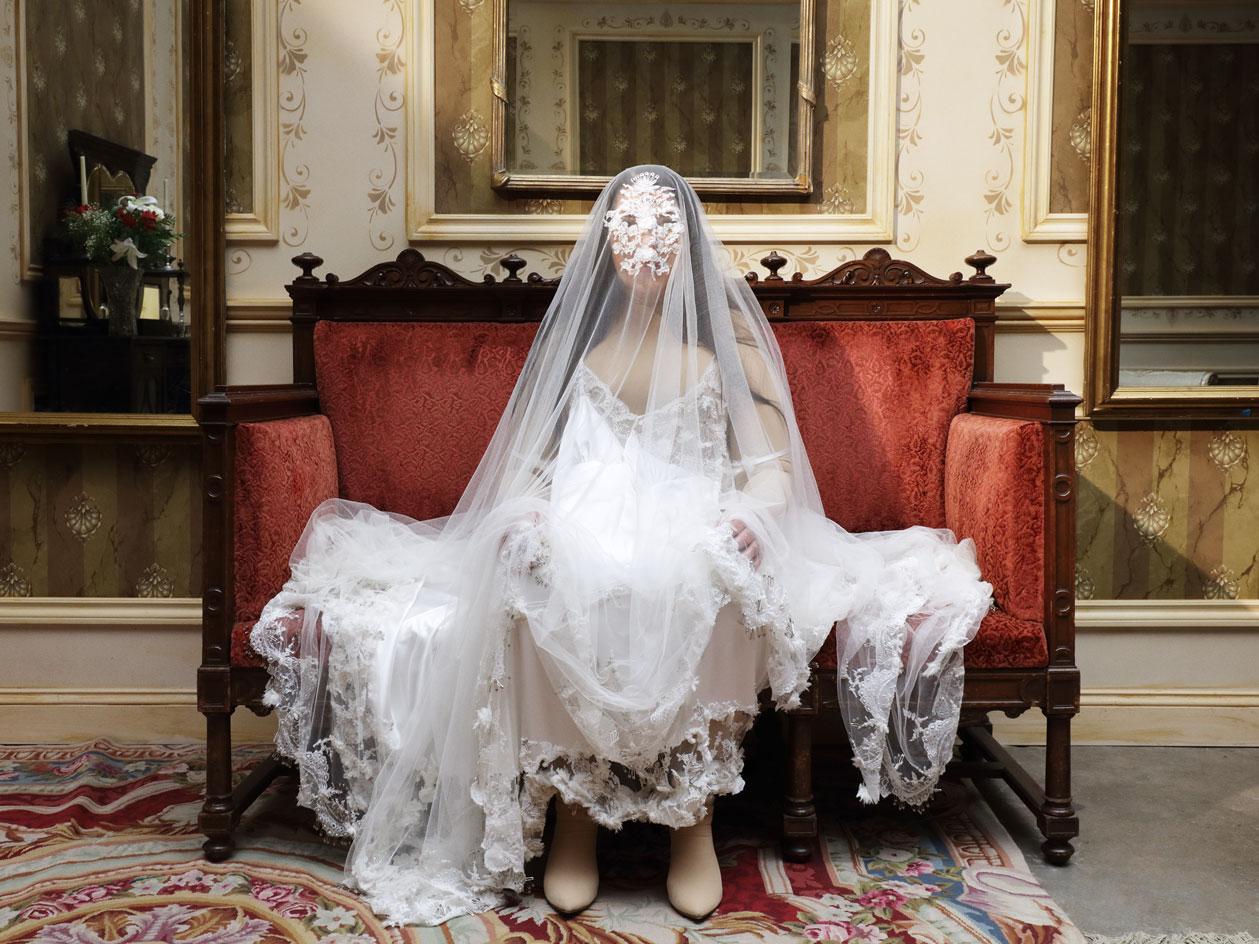 The dedication to the iconic soprano moves through the dramatic climax of seven arias, focusing on the moments of each on-stage death. Abramović concludes the show herself by enacting the real death of Callas (who died alone of a heart attack in 1977, in the grand Paris apartment where she’d spent her last years living in exile and isolation). As a huge multi-media production, it includes elements of new music, performance, and video, includes costumes by Riccardo Tisci, and films featuring Willem Dafoe as Abramović’s recurring assassin (a figure who represents Aristotle Onassis – the man who Abramović conceptualises as the personification of her heartbreak).

The performances is divided in 7 chapters:

—The Snake: The third chapter begins with a slow sequence of winding and unwinding, as Dafoe relieves himself of a giant boa constrictor wrapped around his arms and legs, only to approach Abramović, sat helpless in a throne-like chair, and coil the giant beast around her head and neck. What at first appears a gentle, twisting embrace soon turns into a fully enveloping crush, with only a tiny portion of the artist’s face visible beneath the steadily tightening snake’s seemingly endless form.

—The Mirror: The associations between the figures of Maria/Marina are never stronger than when re-enacting the so-called ‘mad scene’ from a lesser-known opera (Lucia di Lammermoor, by Gaetano Donizetti, 1835) and in the accompanying alabaster, entitled The Mirror (2020-21), which blurs the boundary between self and other. “About a decade ago I began to have long conversations about how to work with sculptural material, but also how to give it some life and have immateriality at the same time… The process of cutting [alabaster] in this certain way allows you to have the image from a distance, but the moment you approach it, the image disappears, literally deteriorates, in front of your eyes – it is actually the non-existence of the image.” 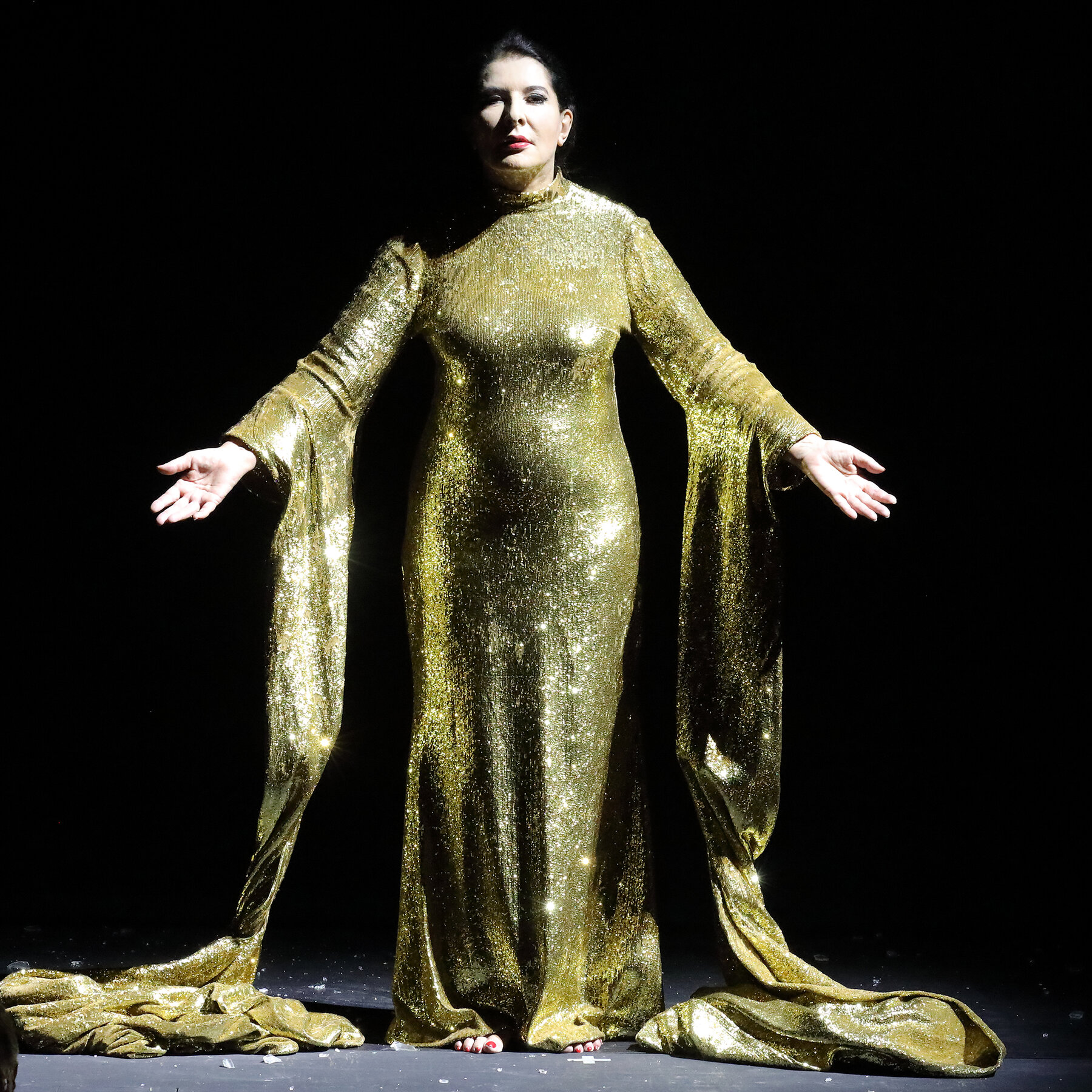 —The Fire: The film reaches its climax during one of the finest performances of Bellini’s Norma, sung by Callas more often than any other opera. The interchangeable personae of Maria/Marina are now complicated further with the spectacle of Willem Dafoe dressed in a full-length gold sequin gown, walking hand in hand into the fire, as occurs in the final act, with Abramović switching to the male role. “When she decides to walk into the fire to sacrifice herself, the Roman general looks at this and understands how stupid he is. He still loves her and how incredibly brave this woman is and so he comes to hold her hand in the fire together. So he’s in woman clothes, and she’s the warrior.”

—The Breath: A dawning realisation, a gust of wind and a raking light disturb the first scene in Marina Abramović’s new film, Seven Deaths (2021), ostensibly set in the bedroom of world-famous soprano Maria Callas who died of a heart attack in 1977, aged just 53. For the full-scale staging of the opera (currently touring from its Munich premiere to Paris, Athens and Berlin) Abramović recreated the final resting place of Callas down to every detail: “…from the paintings, the bedsheets, the Madonna in the front of the bed, even down to the sleeping pills next to her telephone and the flowers she used to have.” 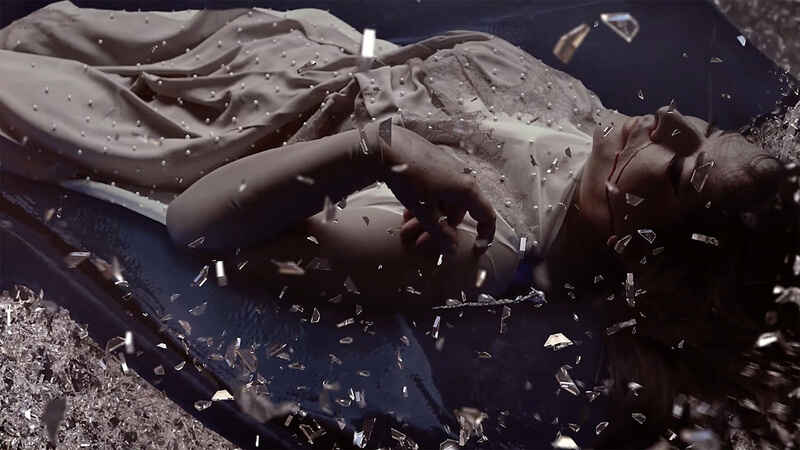 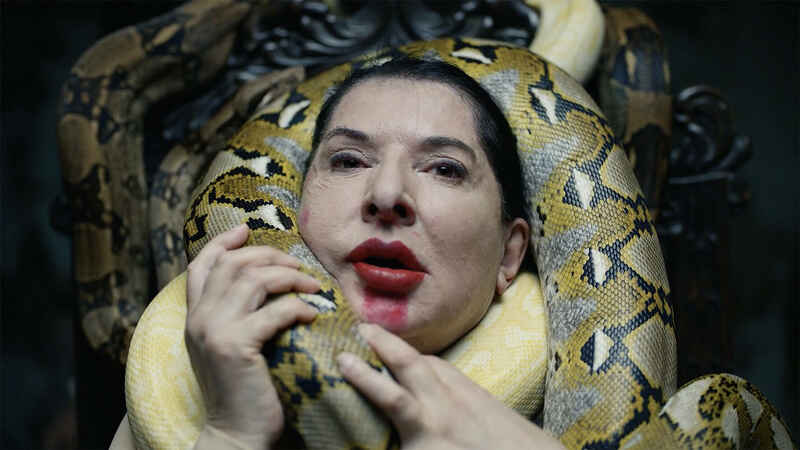 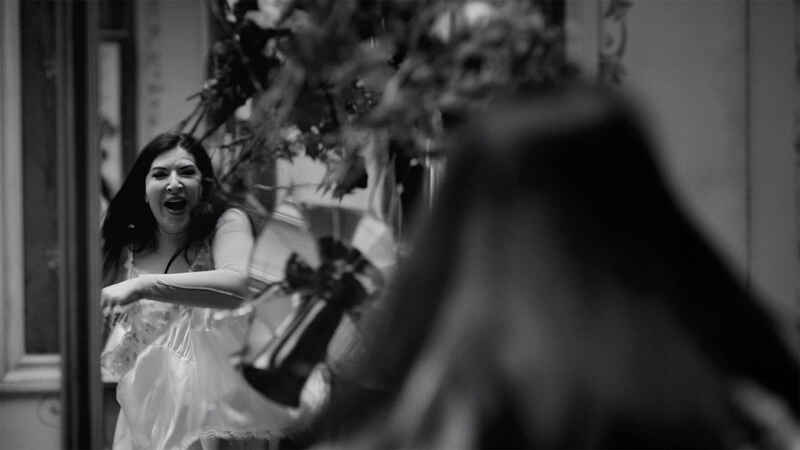 —The Leap: The roles reverse in the second act, in which Dafoe appears deceased and is held aloft in Abramović’s arms, in the manner of the Virgin Mary holding the lifeless body of her son. Staring upwards, the female figure of Tosca, played by Abramović, then ascends to the top of a skyscraper, momentarily composing herself on the precipice before plummeting down in slow motion. As we follow the body on its deadly progress – twisting and swaying while the Callas song comes in wave after wave of crescendo – the ground slowly comes into view again, before the climactic moment of impact with a parked car below and a shower of glass.

—The Poison: This scene (from Act III of Puccini’s Madame Butterfly) opens with Abramović traversing a blasted landscape, hand-in-hand with a child clutching a tiny American flag, as Callas launches into the opera’s famous aria, Un bel di, vedremo (One fine day, we’ll see). Both figures on screen are dressed in yellow hazmat suits, matching the yellowish tinge of the putrid air that surrounds them – this is no fine day. Unlike Madame Butterfly, however, it is not the remembrance of her long-lost American husband, who returns having married another woman, which Abramović pines for, but a larger, emotional or ecological crisis. As Dafoe approaches, the heroine turns away and dramatically disrobes, breathing in the irradiated air. She submits her naked torso to the poison, while Callas trills that her love will one day come home.

For the finale of Georges Bizet’s beloved opera Carmen, the titular character is killed by her rejected lover in front of the bullring in Seville, however the fifth of these Seven Deaths begins with a tug of war between another fictional couple, with the assassin Dafoe in black, wielding a rope and knife, and Abramović dressed in the full traje de luces (suit of lights) as worn by the traditionally male bullfighter, albeit modified and re-designed by Burberry’s principal designer, Riccardo Tisci. In their final embrace, Dafoe indeed plunges the knife into her stomach, as Callas warns all those who profess to love Carmen that they should be on their guard and vice versa – as she is both prey and predator. 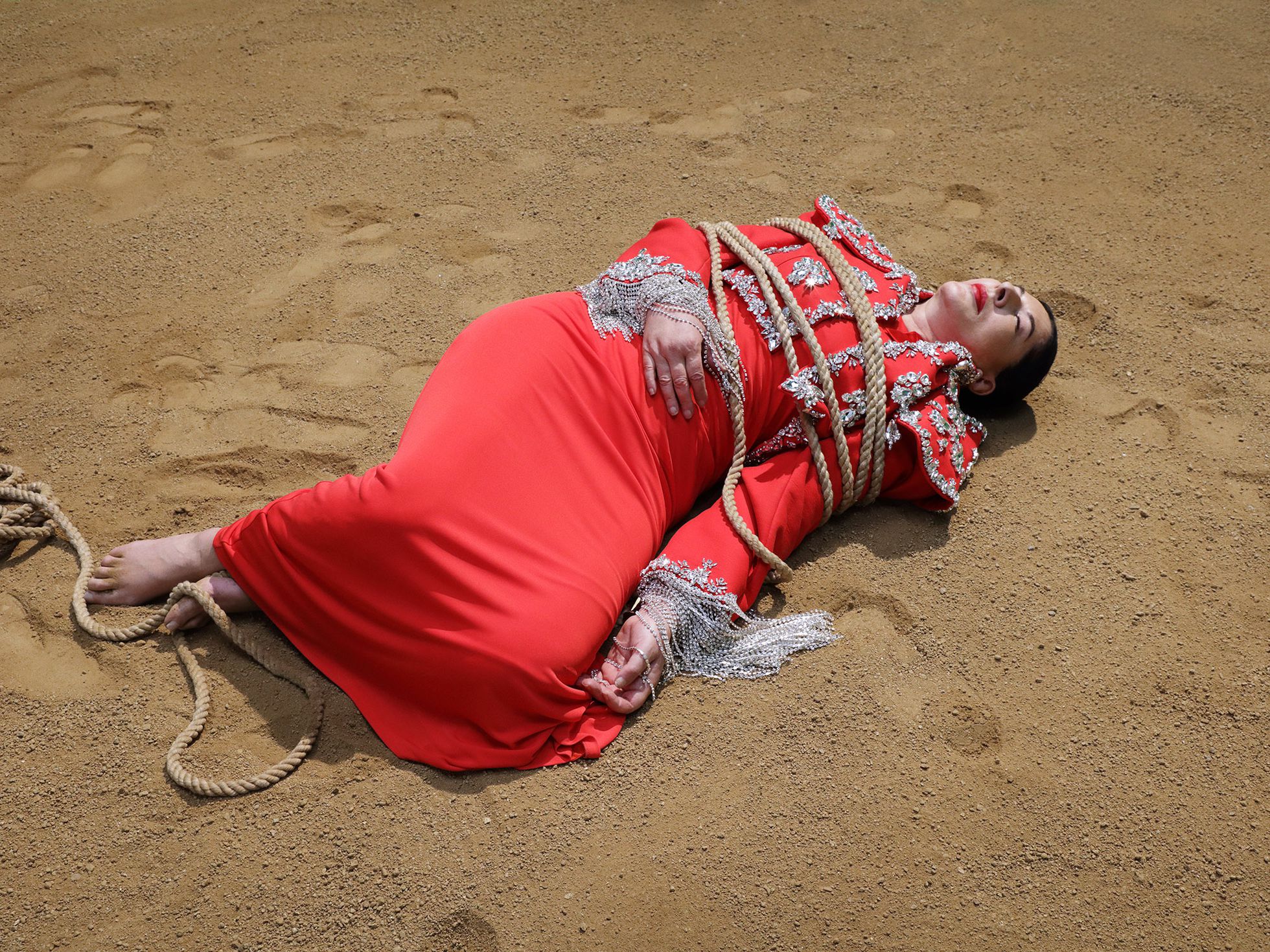 News
Art for Ukraine: From Marina Abramovic to JR
News
Insurrection: The “Most Controversial Film Ever Made” by Andrés Serrano
News
The French Dispatch: A (Fictional) Story About Art and Writing