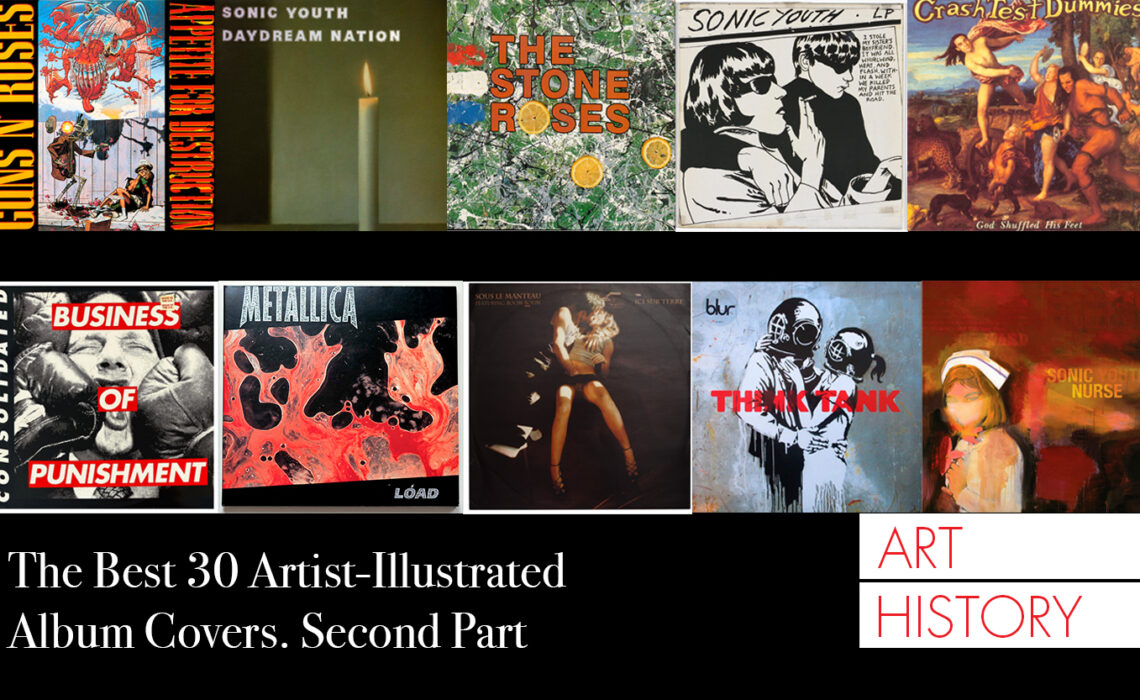 The relationship between music and the visual arts has resulted in covers that not only illustrate musical content, but could even be part of a museum. As, in fact, it happens in some of the works that we have recovered. We selected the 30 most outstanding albums for their artistic images and ordered them chronologically. In this list we show only the second 10.
If you want to review the top 10, click this here: https://www.sybariscollection.com/the-best-30-arti…overs-first-part/ 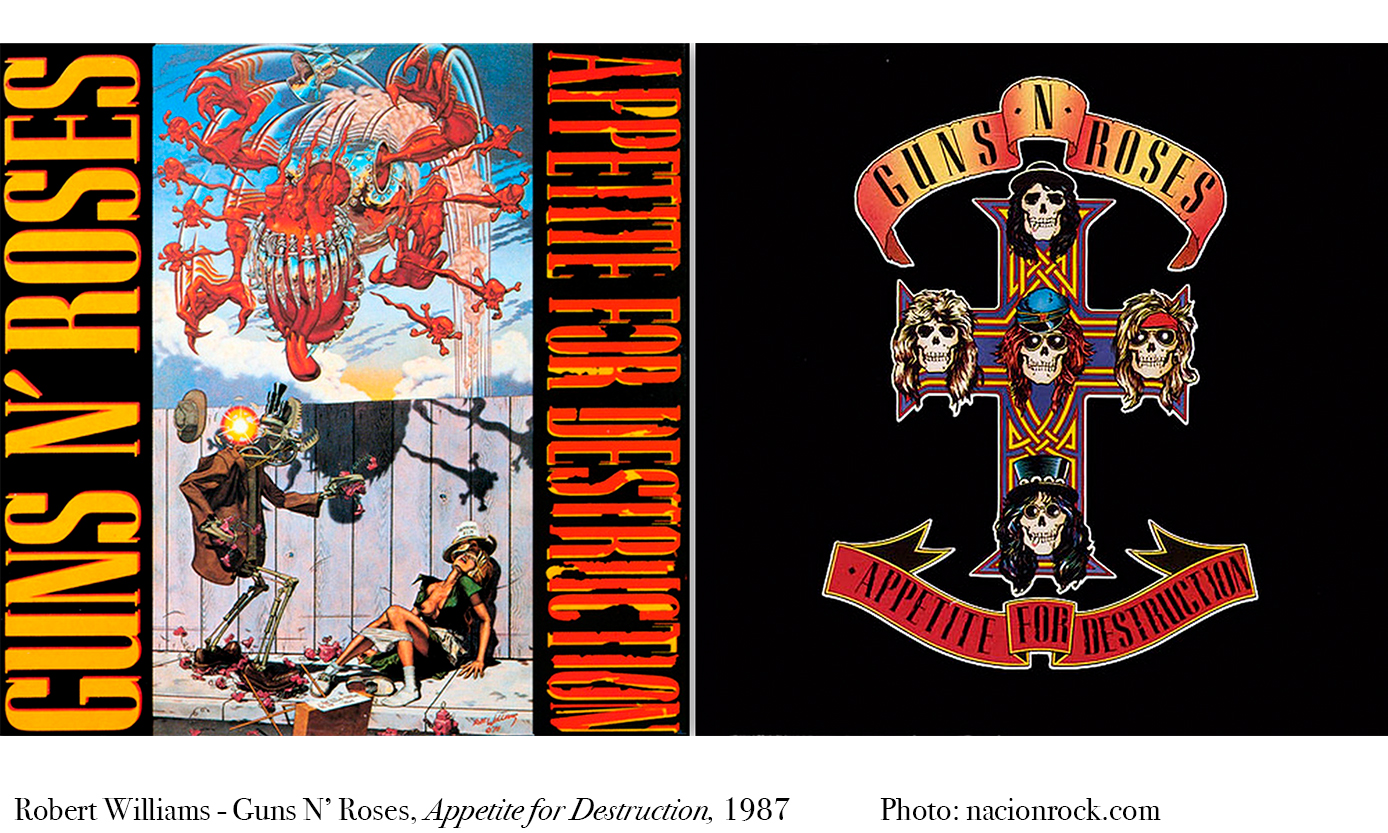 The debut album by the band led by Axl Rose hides a controversial piece of art inside. The story is this. As Guns N ’Roses forged his way to fame, Axl Rose came up with the image of Californian Robert Williams – an underground artist known for using comic stylistic resources – that reflected exactly what he was seeking for  the cover of this album. In fact, the album has the same name as the artwork. The illustration shows a robot toy saleswoman after being raped by a robot. In the sky a justice monster approaches looking for revenge. Williams warned Guns N ‘Roses about the problems they would have if they decided to use  design, because he had already experienced this difficulty himself. When the first copies were released, some stores refused to sell it, so they had to replace the image with a Celtic cross with skulls representing each member of the group and the image created by Williamson was moved inside the album. 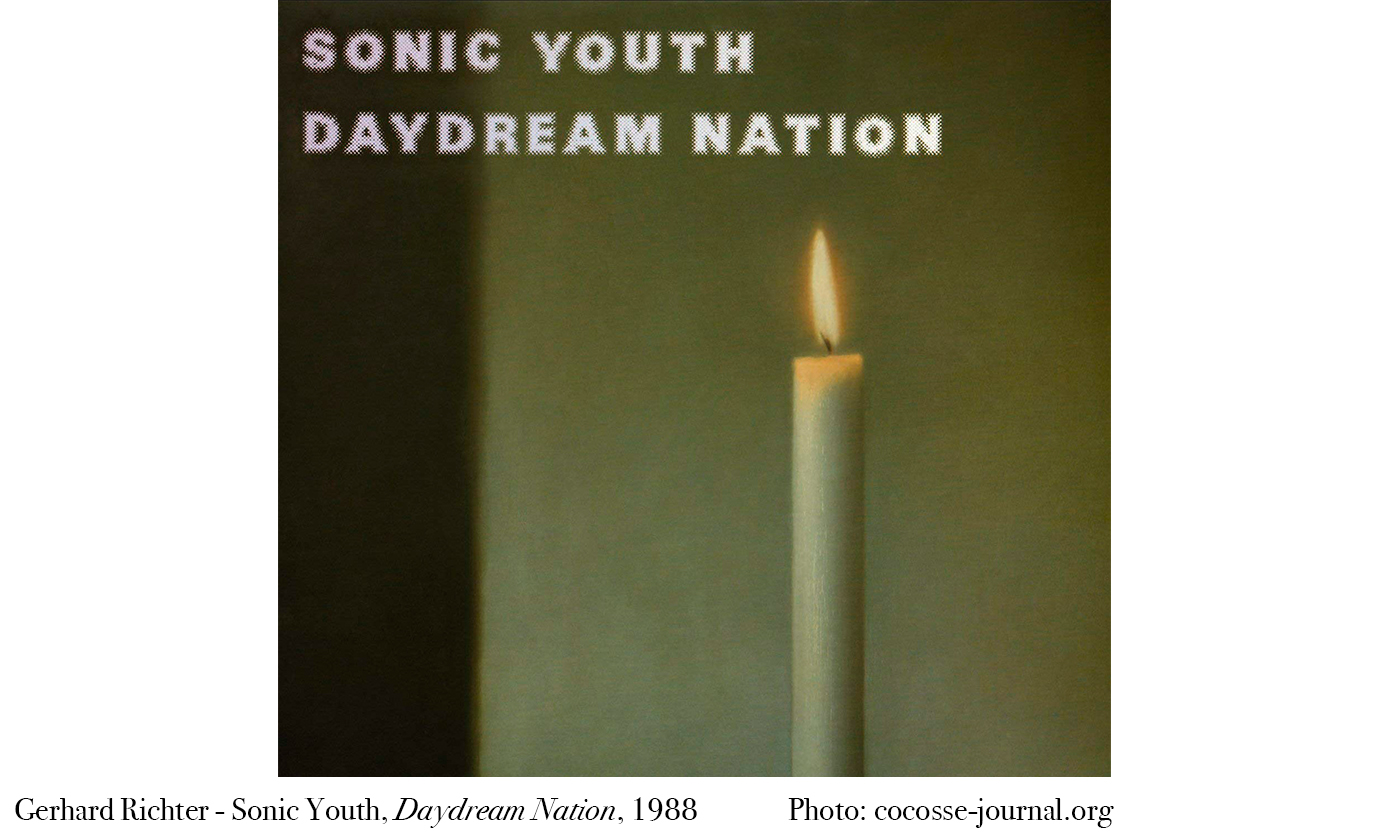 The New York band consisting of Thurston Moore, Lee Ranaldo, Kim Gordon, Steve Shelley and Mark Ibold, reached one of his high points with Daydream Nation, their fifth album; the cover  belongs to a painting by Gerhard Richter from 1982 , Kerze (candle), as, in fact, one of the songs is titled. The back cover is also a painting by Richter, made a few years earlier. Both works of art correspond to a series of Vanitas styles: still lifes that symbolize the fragility of life and the death of the spectator. The original painting was put up for sale at Sotheby’s in 2008 for 2.5 million euros. 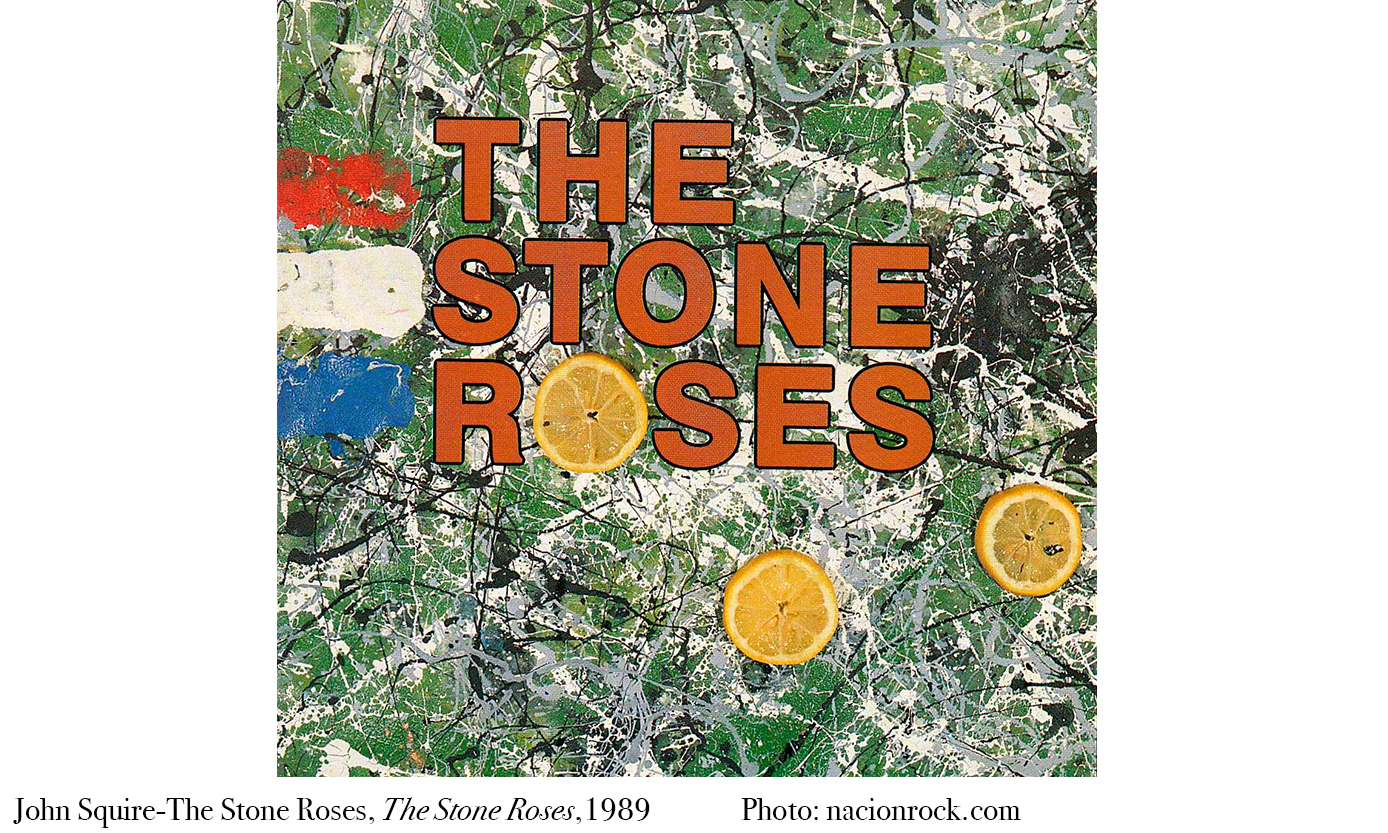 Our 18th on the list is a timid and reckless choice. Timid because the work that represents the album is based on Lavender Mist (1950), by one of the most important references in history: Jackson Pollock. Reckless because the image itself was not made by him but by the painter John Squire, a guitarist who alternates his activities between music and art. The image not only recovers the abstract lines of an uncontrollable fury, but also refers to the flag of France as a reference to May ’68. The detail of the lemons is part of an anecdote lived by the member Ian Brown during his stay in Paris . When he spent a few weeks there in the 1980s, he met a driver who carried a lemon in his pocket as a symbol of protection. During the French May clashes, protesters bit lemons as protection against tear gas. The album sold 4 million copies worldwide. 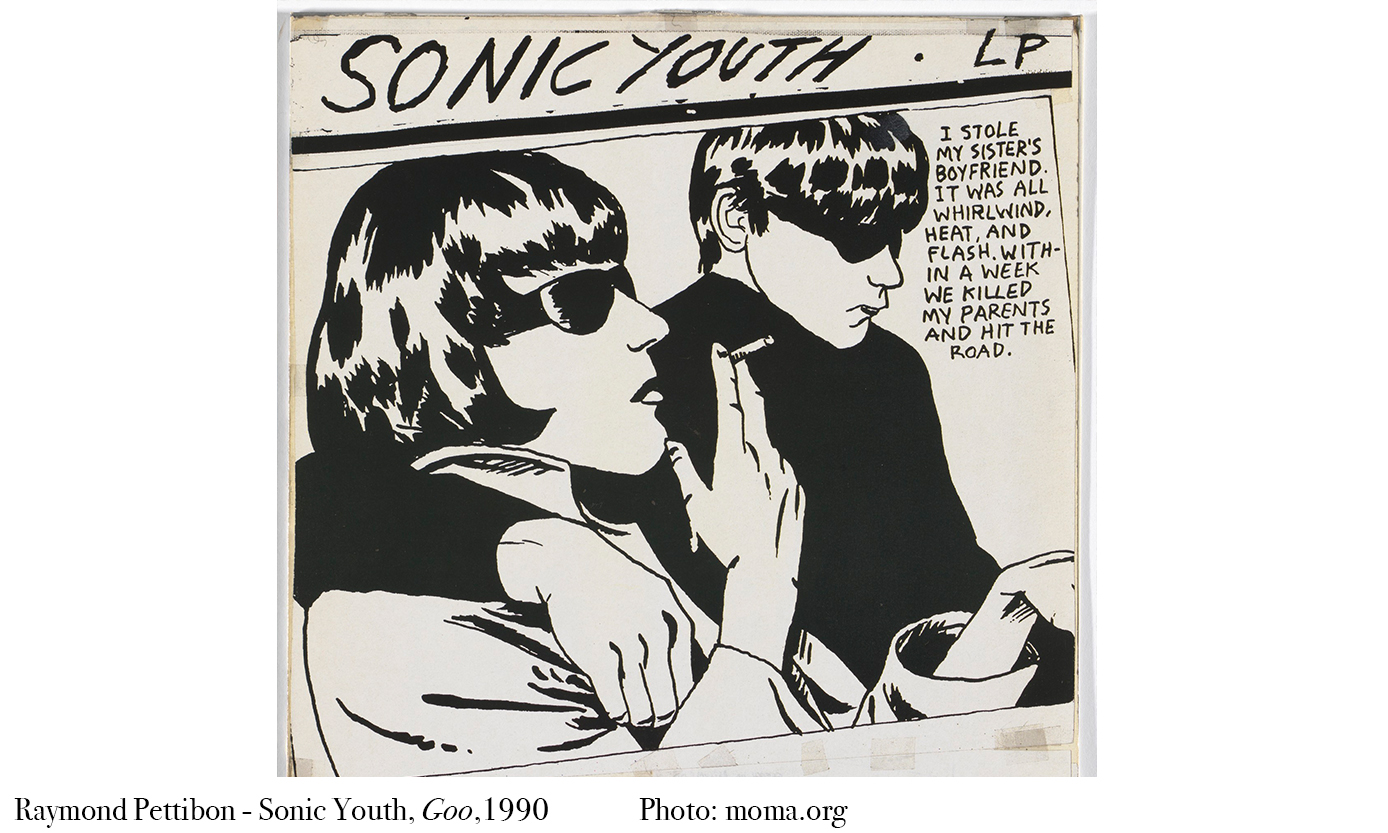 Two years after using the Richter image, Sonic Youth wanted to try a less stylized but equally powerful image. If Raymond Pettibon was already an artist known among rock bands for having worked with Black Flag, with Goo he became one of the references of the music of the nineties: the cover is one of the most iconic of those times. At first the band thought about using a Pettibon illustration of Joan Crawford with the title Blowjob?, but they ended up using this one of  a young couple along with a text about their teenage adventures, very “Bonnie and Clyde”, which talks about the murder of her parents. This drawing was taken from the paparazzi photo of Maureen Hindley and her first husband, David Smith, who witnessed the so-called “Moors Murders,” a series of homicides committed in the mid-1960s in England, by Myra Hindley and Ian Brady, which caused great shock because of the nature of the crimes. 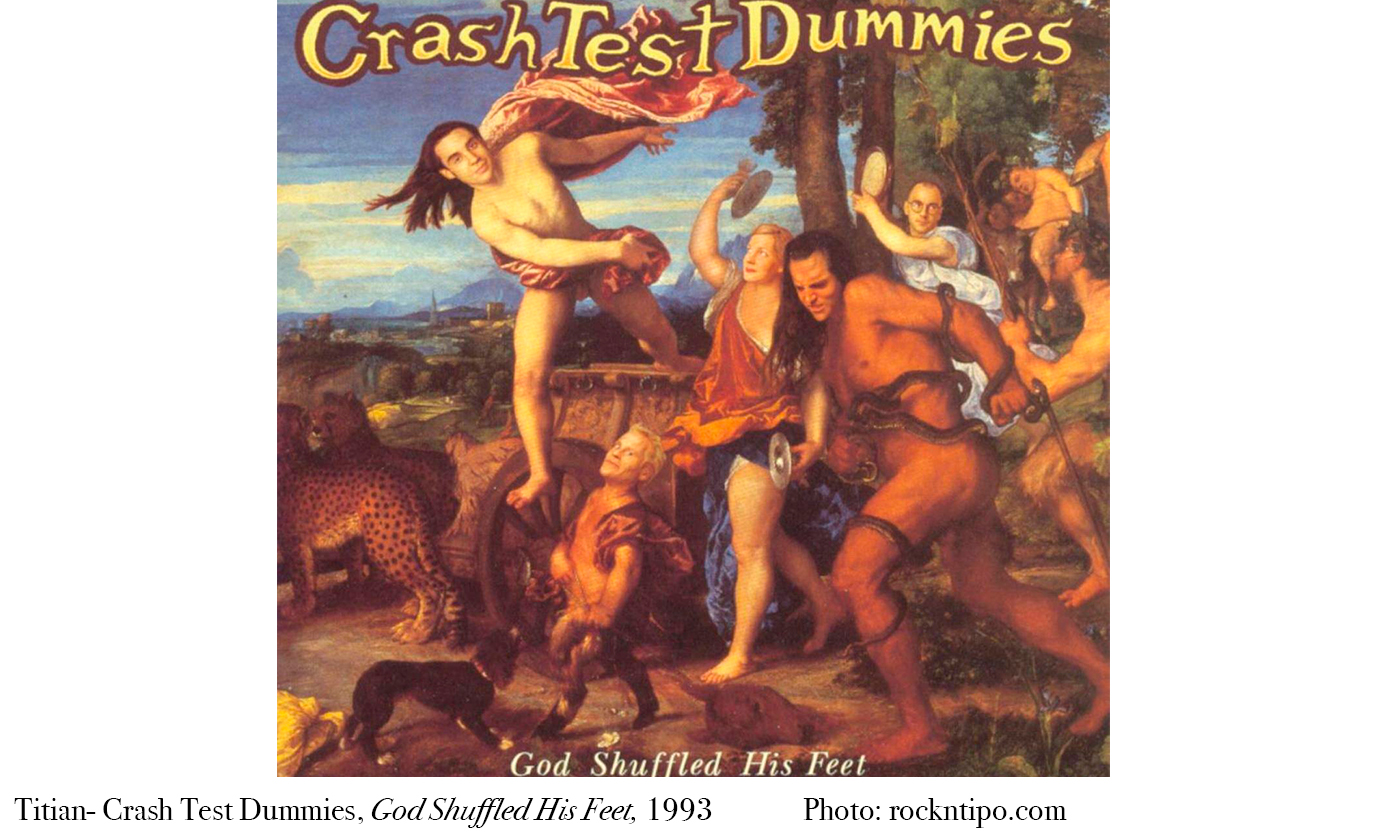 Probably Crash Test Dummies reached its privileged place with its second album, which contains “Mmm Mmm Mmm Mmm”, a hit that became world famous almost immediately after its release and was ranked ninth on the Billboard chart. The original painting created by the Renaissance artist Titian (one of the greatest exponents of the Venetian School) is an oil canvas depicting the encounter between Bacchus and Ariadne, daughter of King Minos of Greek mythology. Sheltered behind the doors of the National Gallery in London, the image serves as the basis in this album to superimpose the faces of the members within the painting. 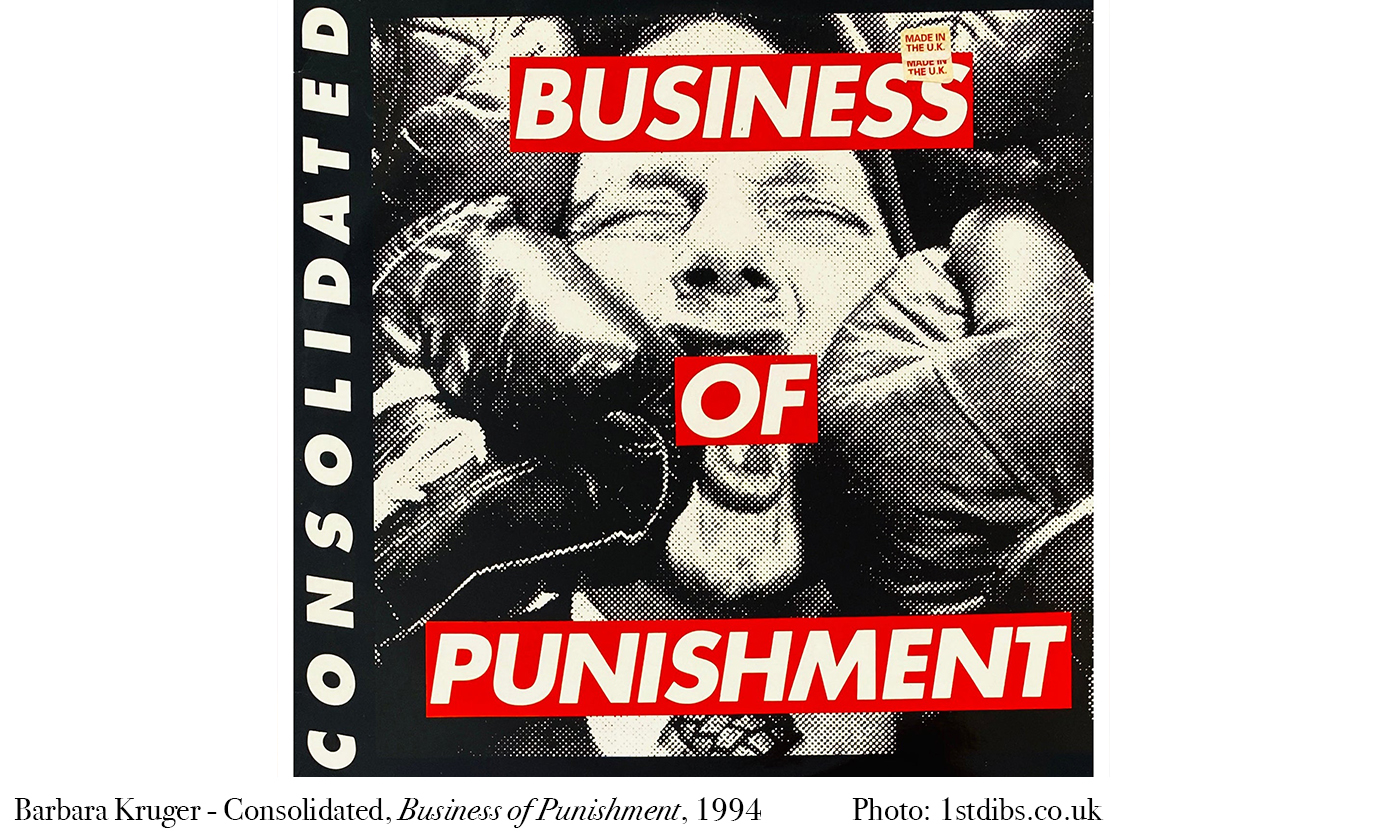 Consolidated was an industrial band from the 90’s whose music exposes issues related to women’s rights, vegetarianism, among other issues. So it is no surprise that Barbara Kruger has worked alongside her for this cover. Kruger is a graphic designer and artist who in her work re-appropriates black and white images to intervene them with blocks of color with provocative phrases on themes like politics, violence or feminism. Her work has been recognized and replicated worldwide. Due to its shocking and subversive force, this image is part of the MoMA collection. 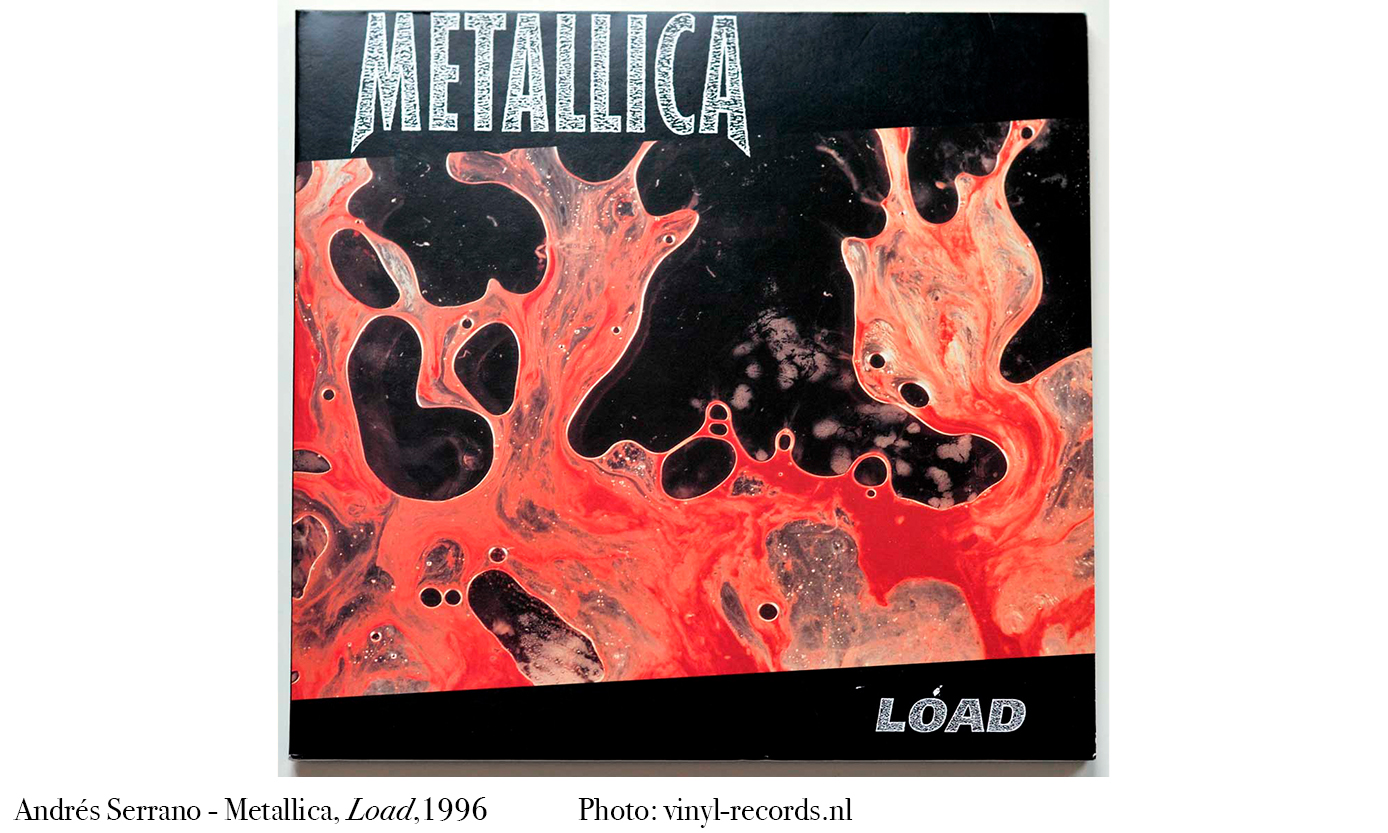 In a 2009 interview with Britain’s Classic Rock Magazine, Metallica vocalist James Hetfield explained what prompted the band to use this image of Andrés Serrano for their sixth album. He explained that Lars Ulrich and Kirk Hammett, drummer and guitarist, respectively, loved abstract art and were fascinated by the artwork but he hated it, so its use responded to this fact, in other words, they chose it to annoy him. And what does it contain? Bovine blood and semen of the artist mixing between two sheets of plexiglass. For Reload, their next album, they, again, used a piece by Serrano (Piss and Blood XXVI), this time, a mixture of blood and urine, from the artist himself. 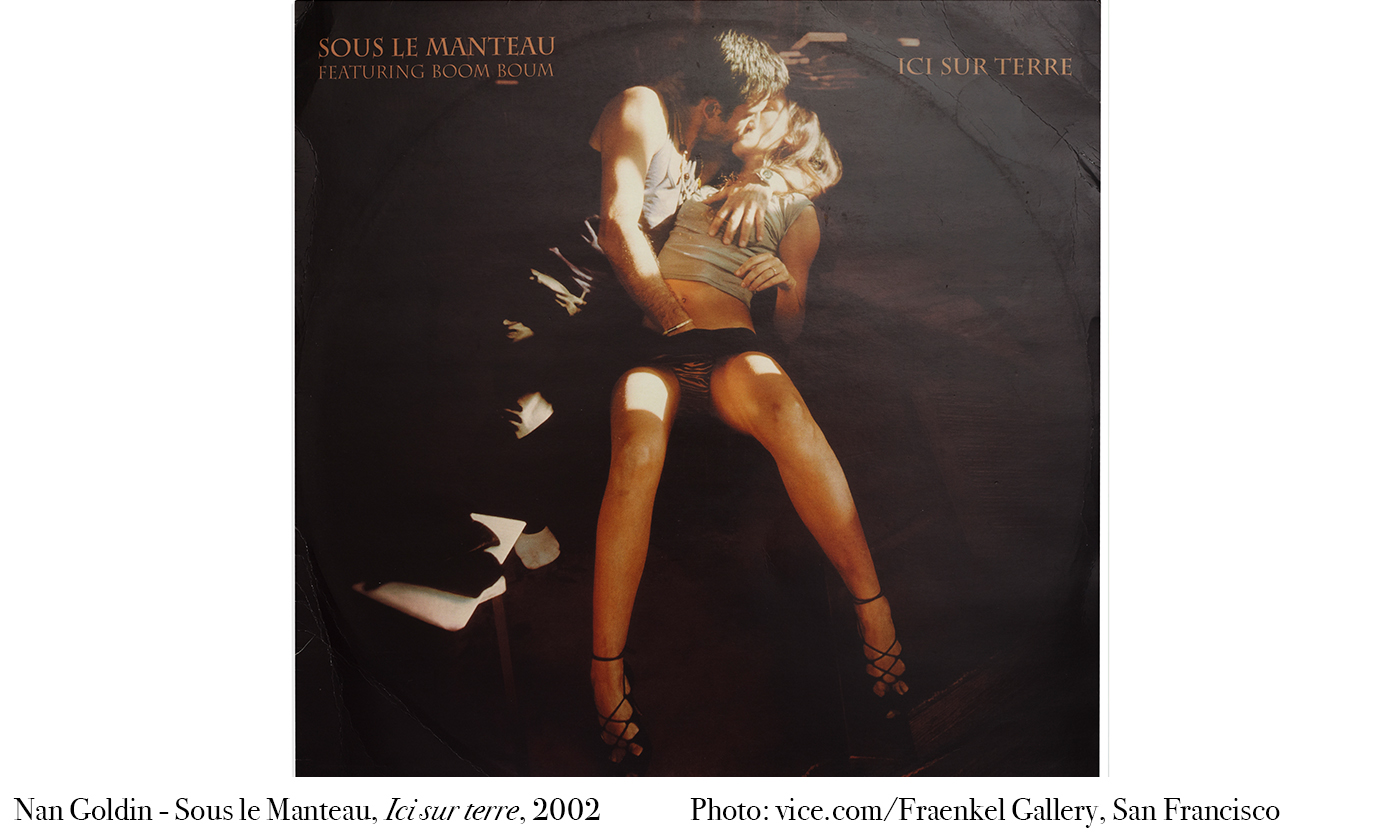 When we talk about Nan Goldin we know very well what we mean. Sex. Violence. Love. Despair. This collectible album has it all. It is a rare specimen of only 300 copies, the cover of which was censored for its explicit image. The protagonists of the photo are part of a larger project where the artist explores the limits of personal relationships. For this album, Boom Boum (part of Aurèle LostDog ​​and Joana Preis), who collaborates with Sous le Manteau, explains the origin of the image: “We met in 1998 in New York in the department of the famous photographer Nan Goldin, who most later gave us permission to use this wonderful photo for a series of very limited promotional vinyls. ” A true fusion between art and music. 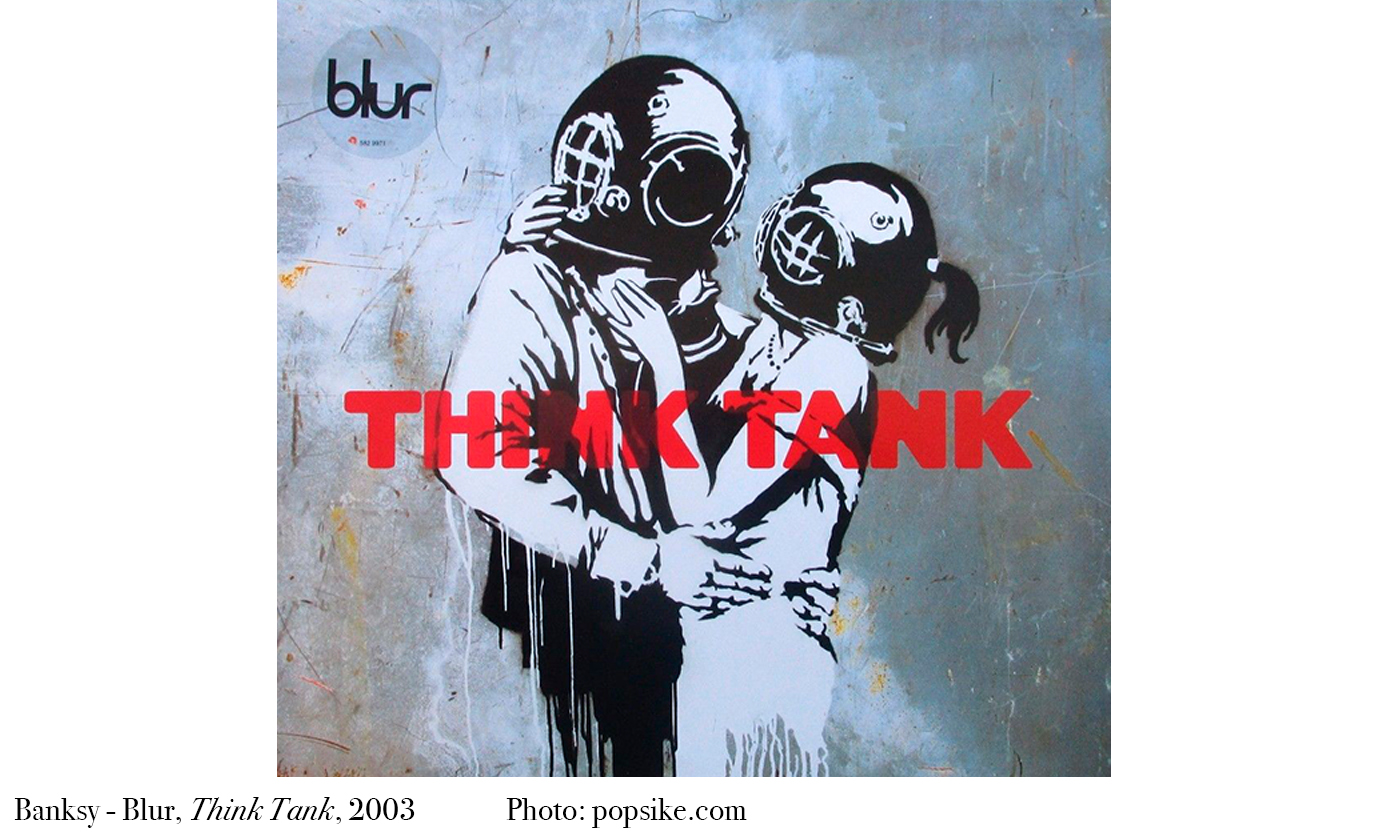 Banksy’s identity has long been a mystery exploited by the media to generate news. This Blur album is part of the intrigue. For some time it was speculated that Jamie Hewlett, founder and one of Gorillaz’s cartoonists, was Banksy. Suspicions were founded on the strange connections that existed between him and the people and companies surrounding the graffiti artist. (Later it has been said that he is actually Robert Del Naja from Massive Attack). Commissioned to make the cover for the seventh album of the legendary English band, Banksy. Although Banksy, had said on several occasions that he did not do commercial work, after this collaboration, he declared, with a tone of irony, that the pay was very good. One of the interior illustrations, Space Girl and Bird, sold at auction in 2007 for $ 576,000. 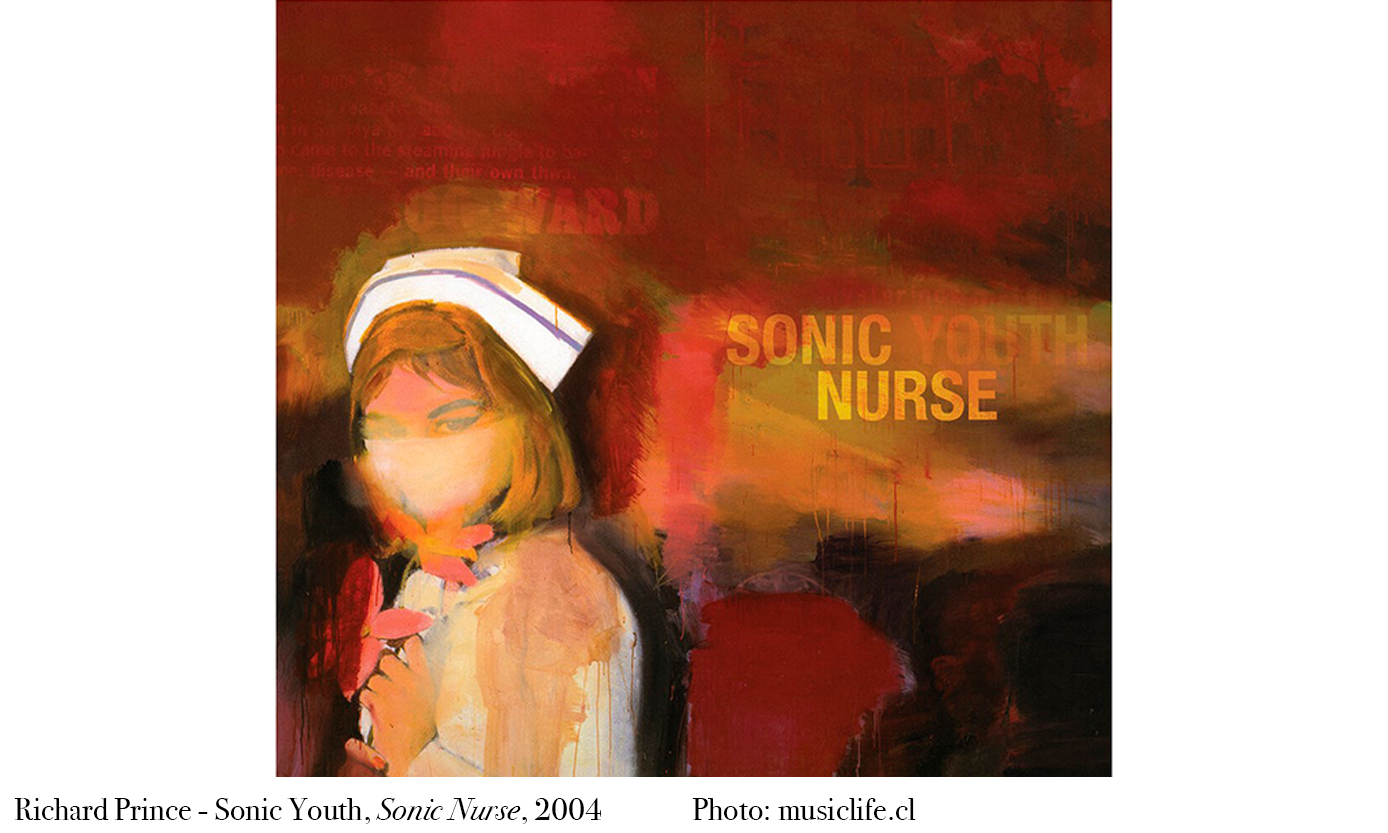 It is not a coincidence that Sonic Youth appears three times on our list. Influenced by the New York avant-garde, its members are very close to contemporary art, contemporary music (in 1999 they released the double album SYR4: Goodbye 20th Century, where they pay tribute to John Cage, Yoko Ono, Steve Reich and Christian Wolff) and Literature. In this album they used 5 works from Richard Prince’s Nurse Paintings (2003) series: the one on the cover and 4 more found inside. Even one of the songs is homonymous to one of the paintings, Dude Ranch Nurse. This series went on sale at various auctions in the following years and its prices reached between four and nine million dollars each, setting sales records.

*Lucía Peñalosa studied Art and Cultural Heritage at the Autonomous University of Mexico City. In recent years, her work has focused on the coordination and management of museum projects, and more recently, on curatorial processes. Her area of ​​interest focuses on critical museology, as well as the gender perspective, feminism and music.