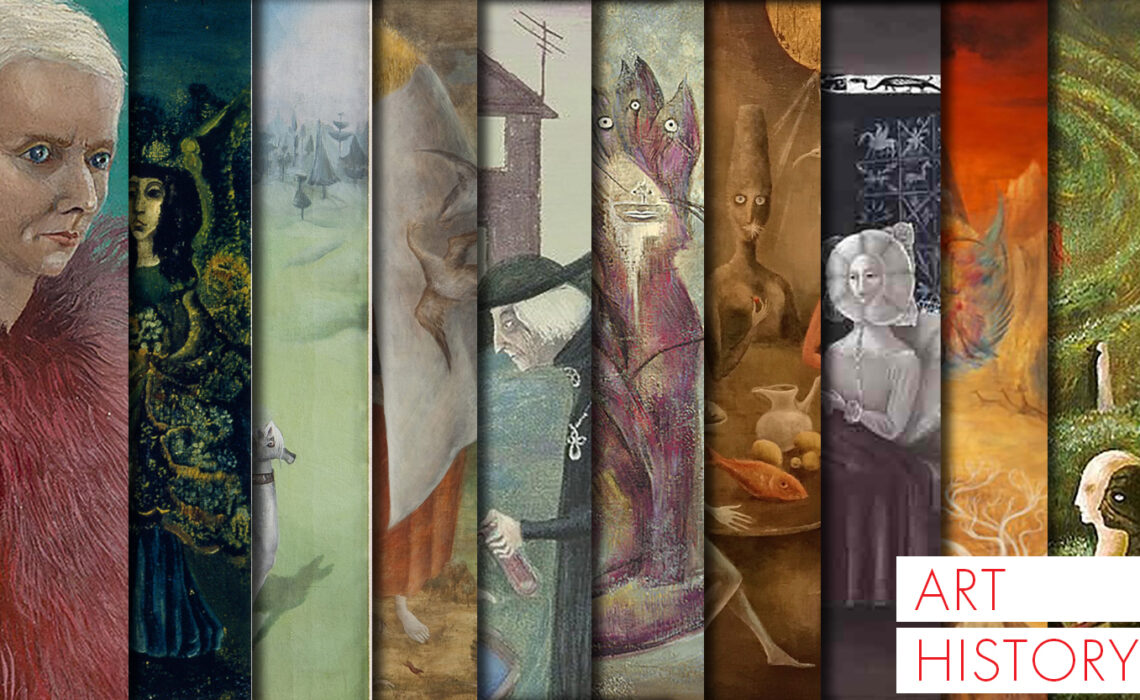 Leonora Carrington Moorhead is one of the most important referents of Surrealism. Born in Lancashire in 1917, she spent her first years of life in a neo-Gothic-style mansion, where she began to devise some of the creatures that haunted her throughout life: fantastic animals, specters and memories where dreams merge with reality. To commemorate the mourning anniversary of the Mexican artist (who disappeared on May 25, 2011) we recovered 10 of her most emblematic works. 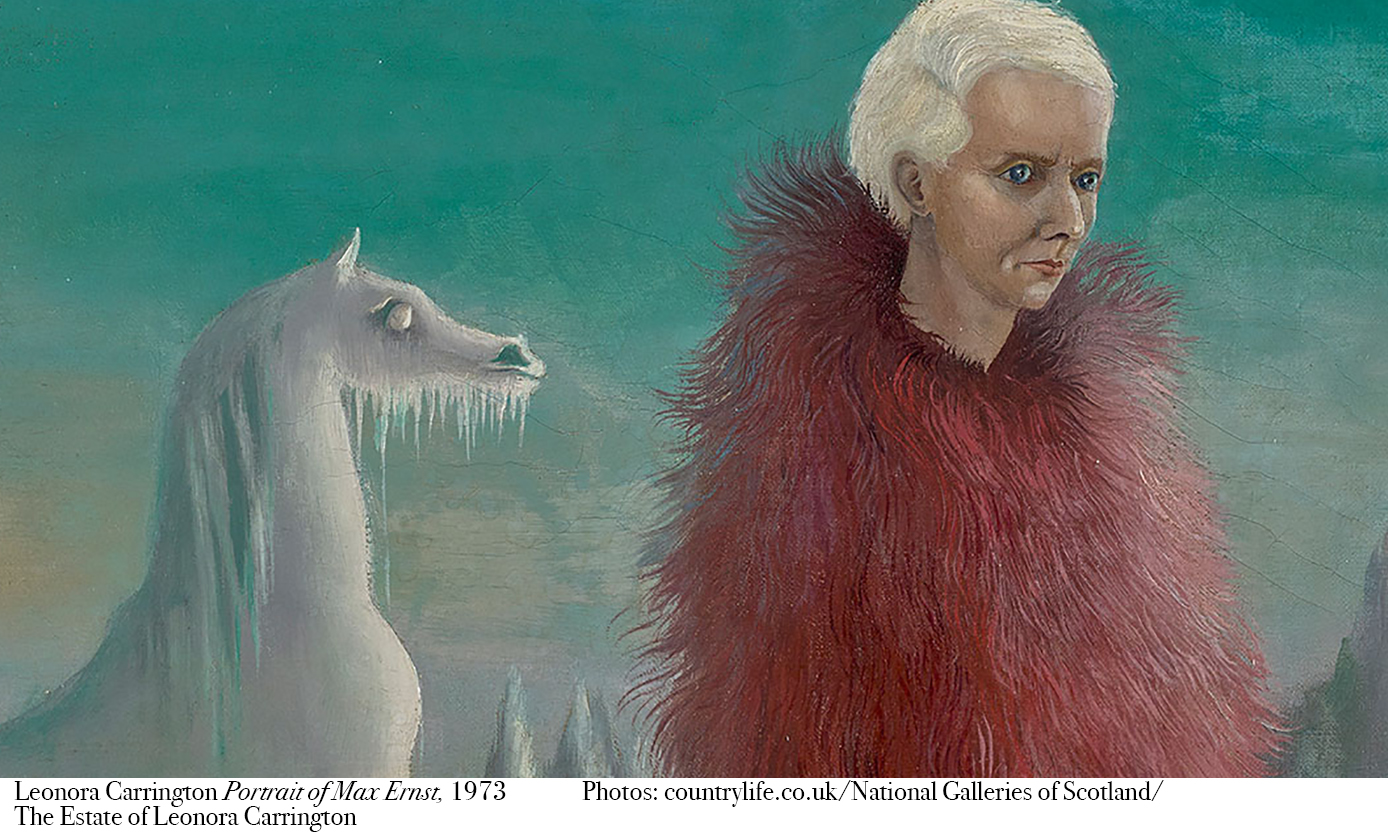 Carrington grew up surrounded by Celtic myths and legends. Her mother, Maureen Moorhead, shared with her some of the ancient stories about the origins of Ireland, which later came to life in the paintings of the Mexican artist. Her father, Harold Wilde Carrington, was a successful businessman focused on engaging his daughter in high society. Leonora Carrington accompanied Max Ernst at a dinner and fell in love with him. From this moment on, she joined the surrealist group led by Salvador Dalí, Luis Buñuel and André Breton. Some time later, the couple moved to Paris, until the arrival of the Second World War caused Ernst’s arrest. 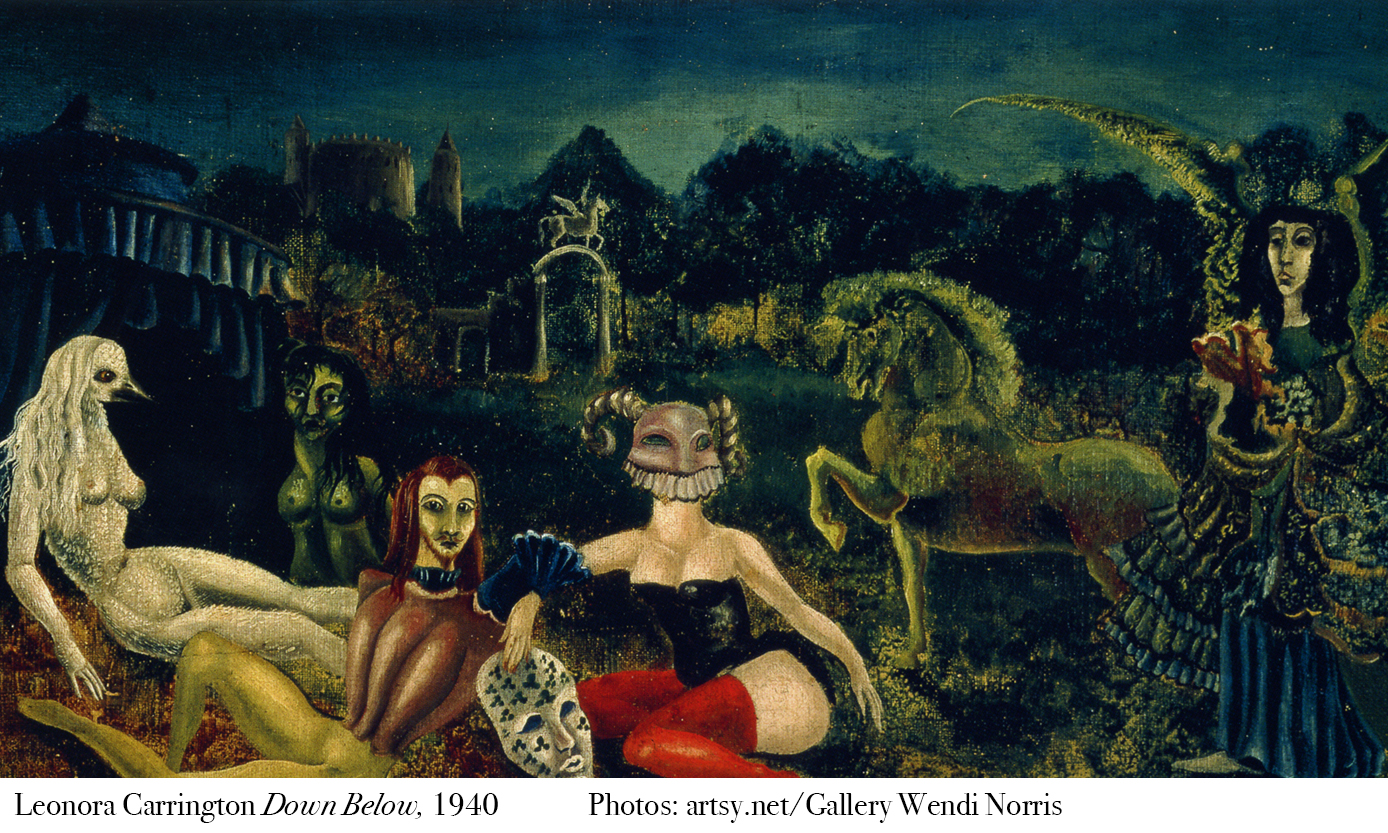 When World War II started, Leonora Carrington fled to France and later settled in Spain. There Ernst was caught as an anti-fascist and degenerate artist. The artist – who dedicated her last years to sculpture – had a nervous breakdown after what happened. With the intention that she forgot everything, her father admitted her to a psychiatric clinic in Santander. Memories from Below is the document that records the hell that lived in there. The painting of the same name – which she conceived while she was locked up – projects signs of madness crossed by concepts such as sexuality, fantasy and bifurcation. The characters seem to hide their true faces behind the masks they wear. 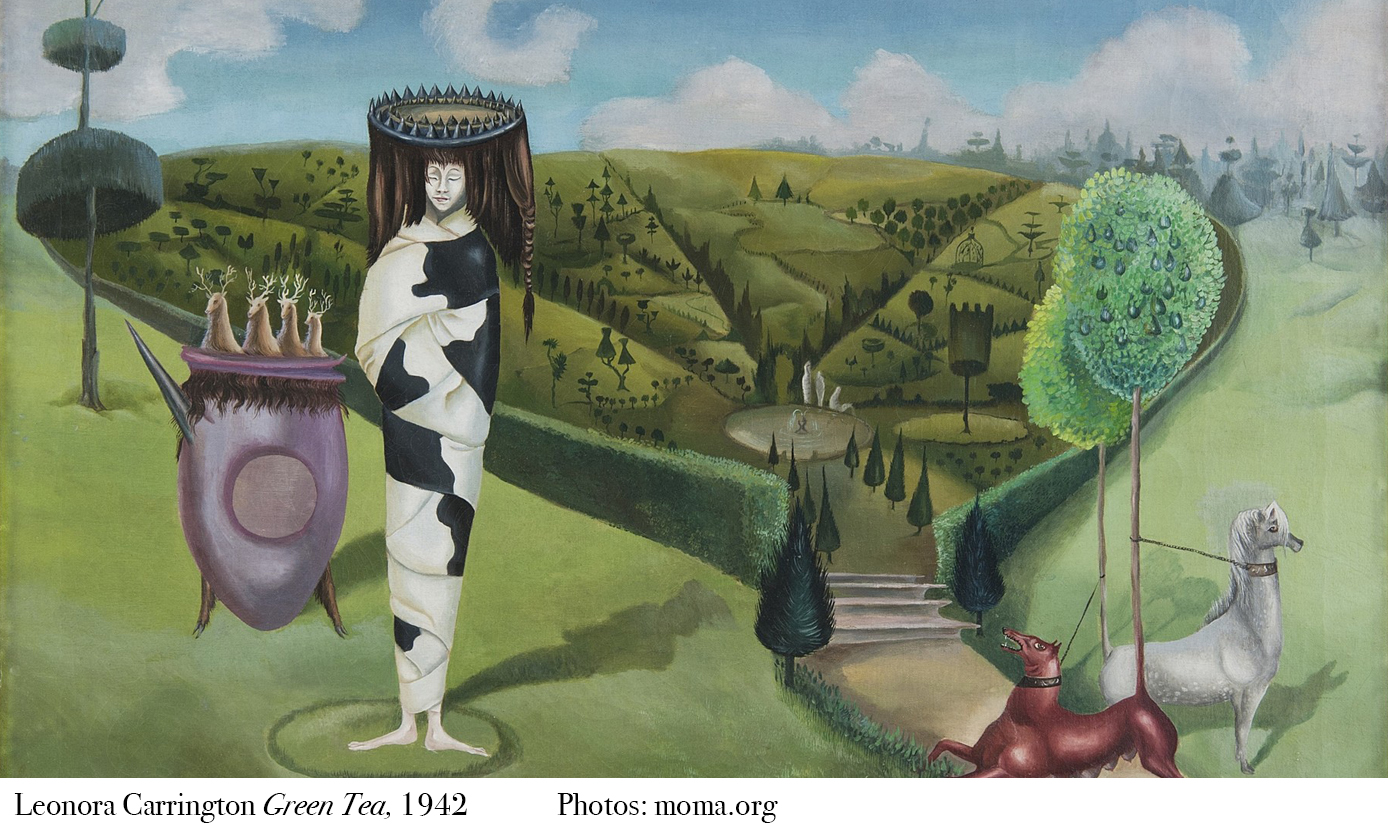 We are in Mexico in 1942. Leonora Carrington has started a new stage in her life that will be reflected in her paintings. After spending hell in Santander, her parents decided to transfer her to a clinic in South Africa, but she managed to escape on the way by going to the Mexican embassy in Lisbon, where she married Renato Leduc to sign her retirement from Europe. War, escape, and psychiatric treatments are central themes in her creation of that time, and symbols of her contrasting emotions. At Green Tea you can see a neo-Gothic castle accompanied by large gardens and forests, a reference to the place in Crookhey Hall where she lived with her parents. 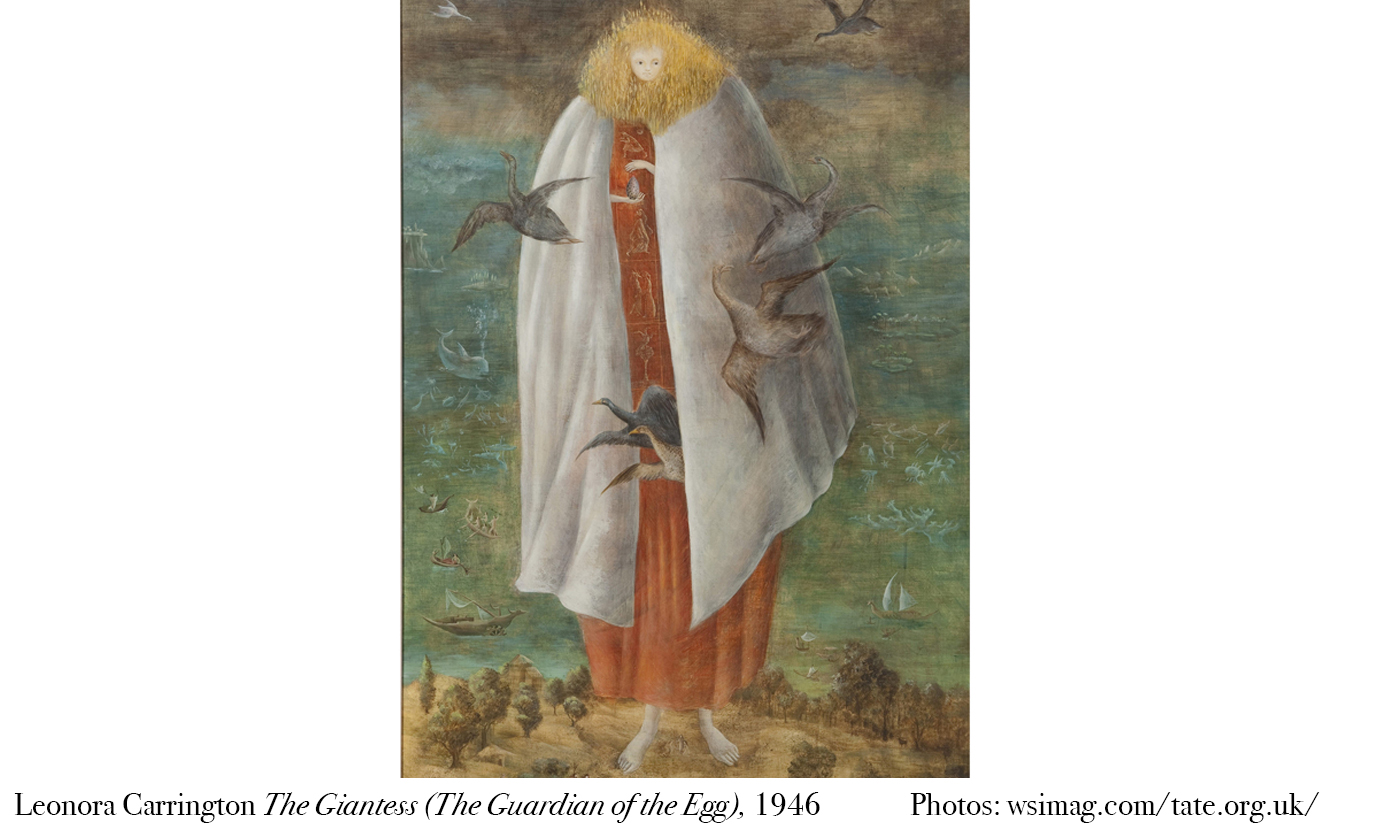 Edward James and Carrington have had a friendship since they met in Acapulco in 1945. The poet, sculptor and patron of some surrealists such as Dalí and Magritte, assigned Carrington the making of The Giantess (The Guardian of the Egg), painting starring a goddess dressed in a red cloak at James’ request. The egg that the goddess holds is related to some mythologies that symbolize this object as the origin of the world. The artist has always been concerned with nature and the sacred bond it had with past religions and civilizations. Here not only those interests are observed, but also the power of the female figure. 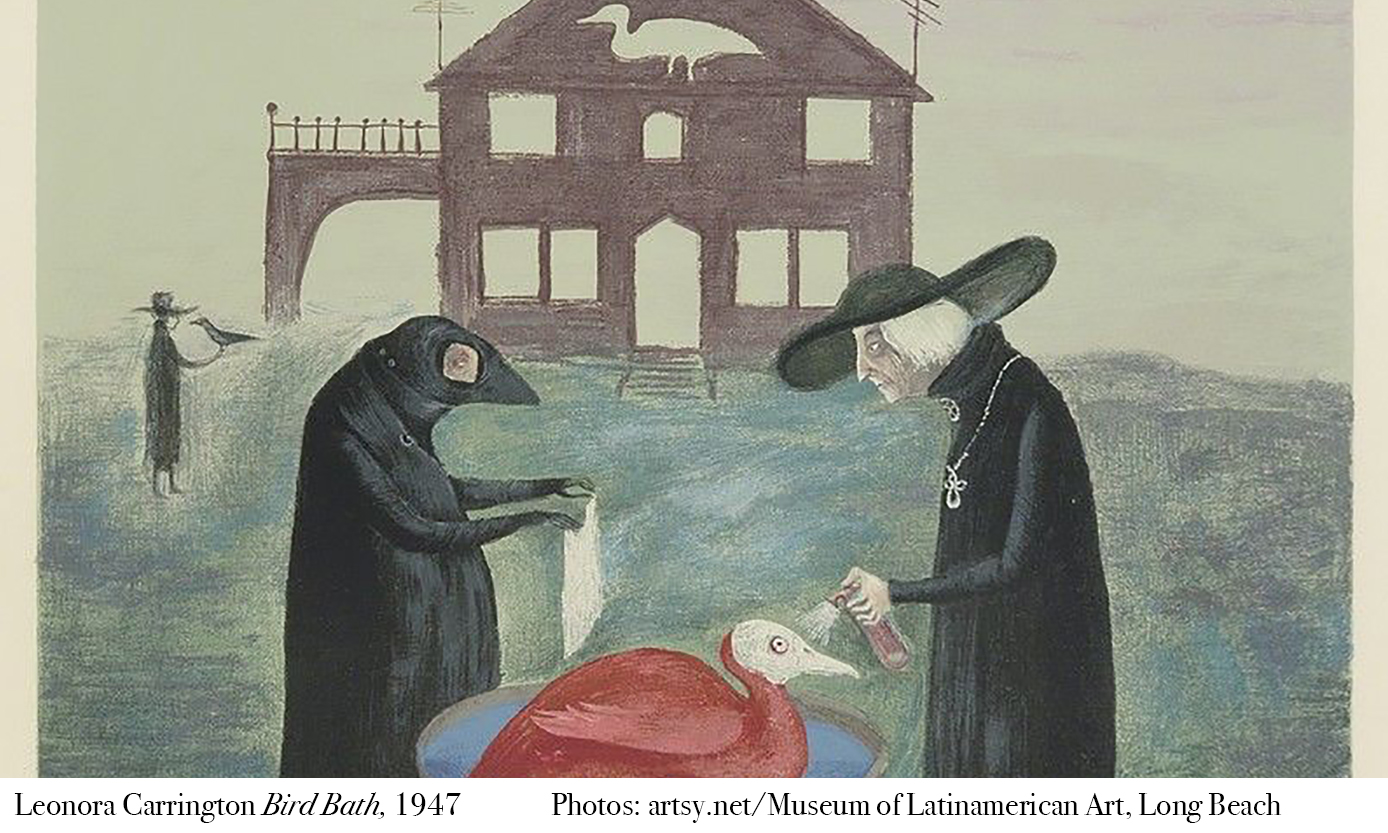 Educated at the Convent of the Holy Sepulcher in Chelmsford, Carrington’s world was inhabited by goblins and ghosts, many of whom provided the stories her mother and grandmother told her. Since she was a child, she created her own universe mixing supernatural stories with dreamlike and fantastic passages. The structure of this painting refers to the artist’s childhood home, where she discovered a space decorated with ornamental birds. In the words of the filmmaker Luis Buñuel, the work of the Mexican artist “frees us from the miserable daily reality”. 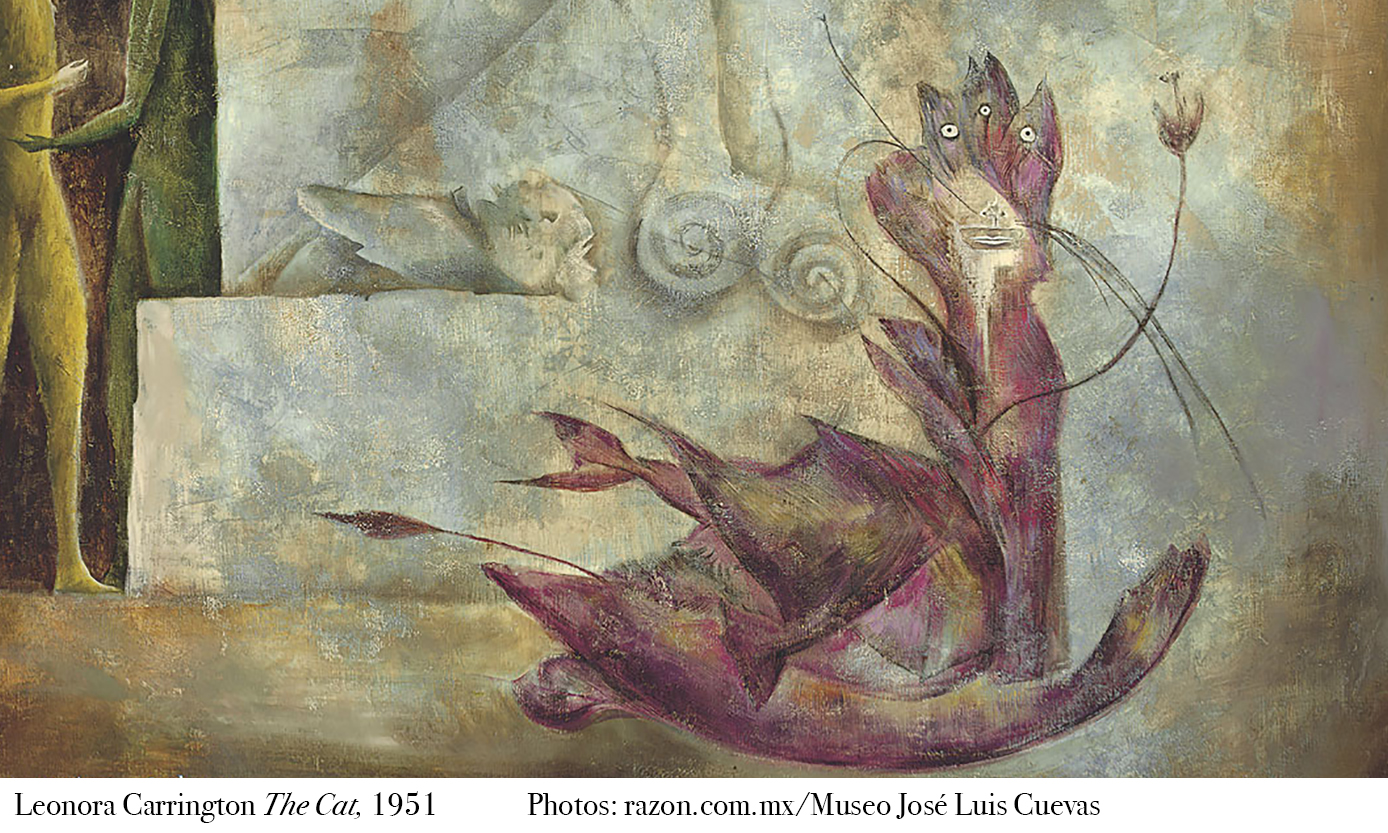 The painter was a lover of cats. As a testimony, not only this work can be mentioned, but also the novel The Hearing Trumpet (1976), in which she writes about alchemy, nuns and coexistence between animals. This piece was made shortly after the birth of her son Pablo, and shows a universe in which she represents herself, Remedios Varo and the cats of Marian Leatherby, a character in the novel. Monsieur and Ramona was the name she assigned to her last cats, which, incidentally, were Siamese. Both lived with her Maltese dog, Yeti. 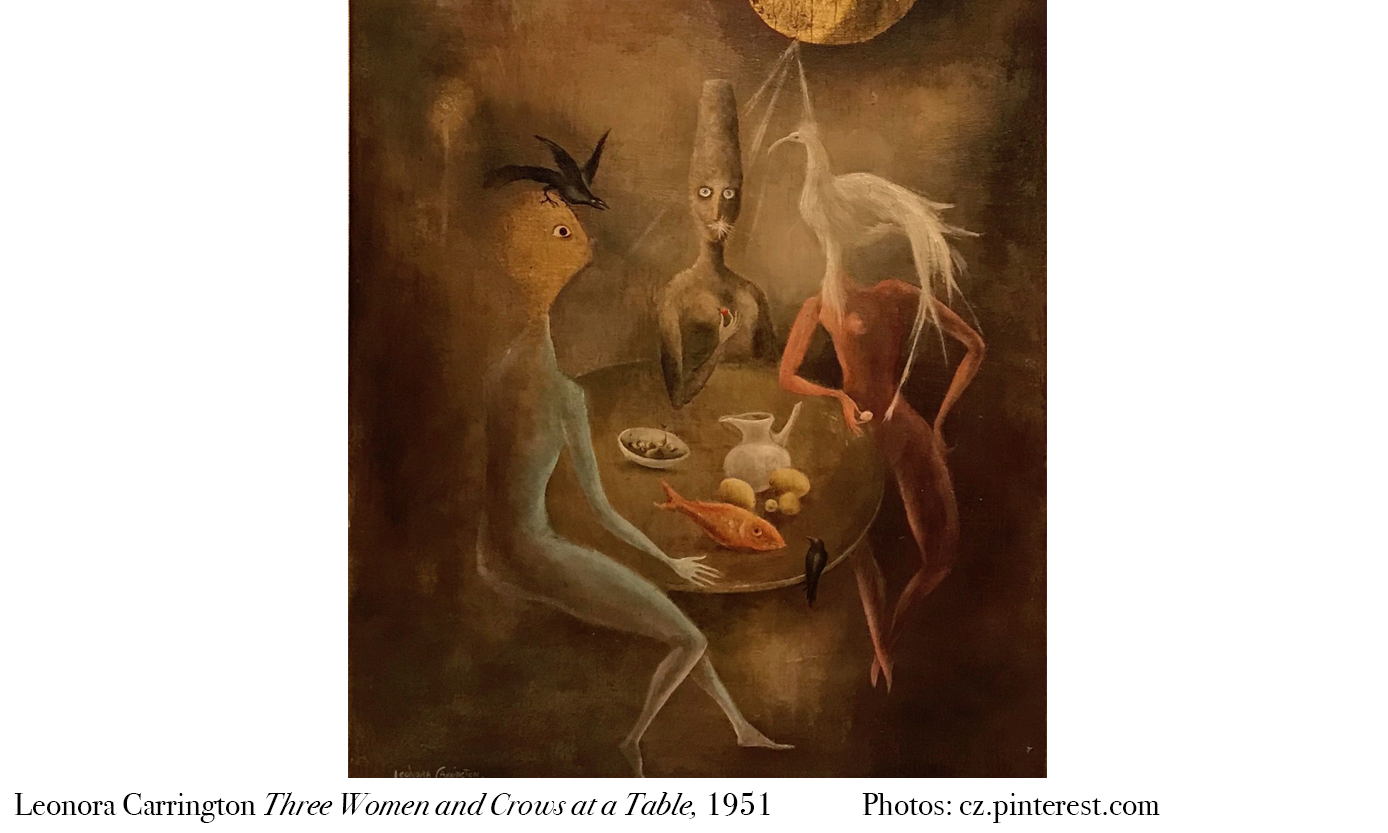 Remedios Varo and Kati Horna were close friends of Leonora Carrington. And, among the three, they played at being sorceresses: they investigated secret recipes, they practiced esotericism and the occult. They were fond of the tarot. Attracted by magic, they toured the Sonora Market (in Mexico City) to acquire culinary and medicinal ingredients. This piece shows the three gathered around a table, accompanied by objects and ready to perform a magical transformation. Some interpretations of this work refer to a ritual scene in honor of Hecate, ancient goddess of Greek mythology, considered “mother of witches”. 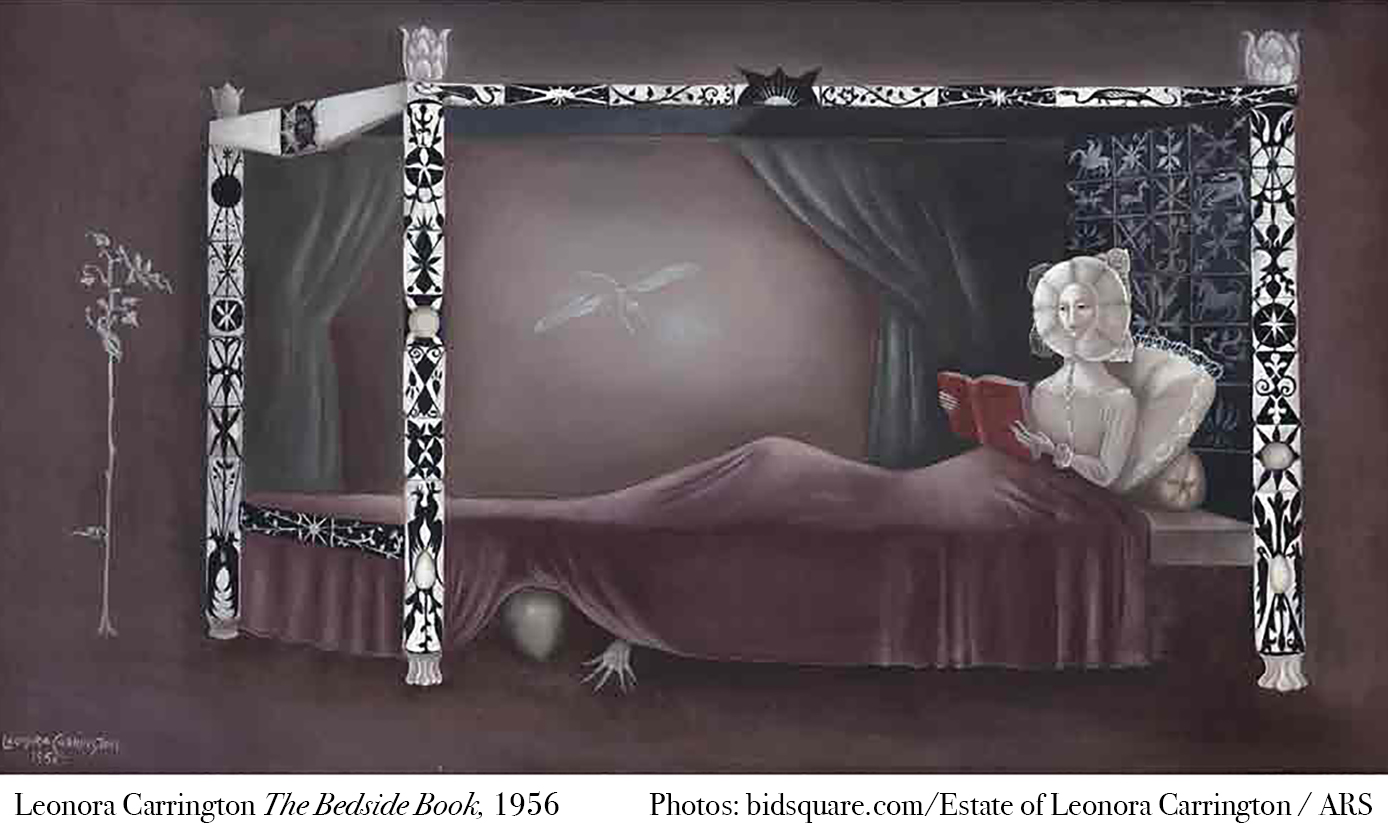 This creation was part of the biannual selection of the 215 Latin American works that Morton Subastas presented in November last year. And it marked the third moment in which Leonora Carrington’s artistic legacy paraded through the list. Coming from the Gallery of Mexican Art, it was initially valued between 4 million 200 thousand pesos and 6 million Mexican pesos. The result of the auction exceeded the expectation when it was sold for 9 million 856 thousand pesos to the MAPFRE Foundation; that is, twice its initial value. The work was exhibited this year at the Leonora Carrington: Your Country exhibition at the ARKEN Museum of Modern Art in Copenhagen. 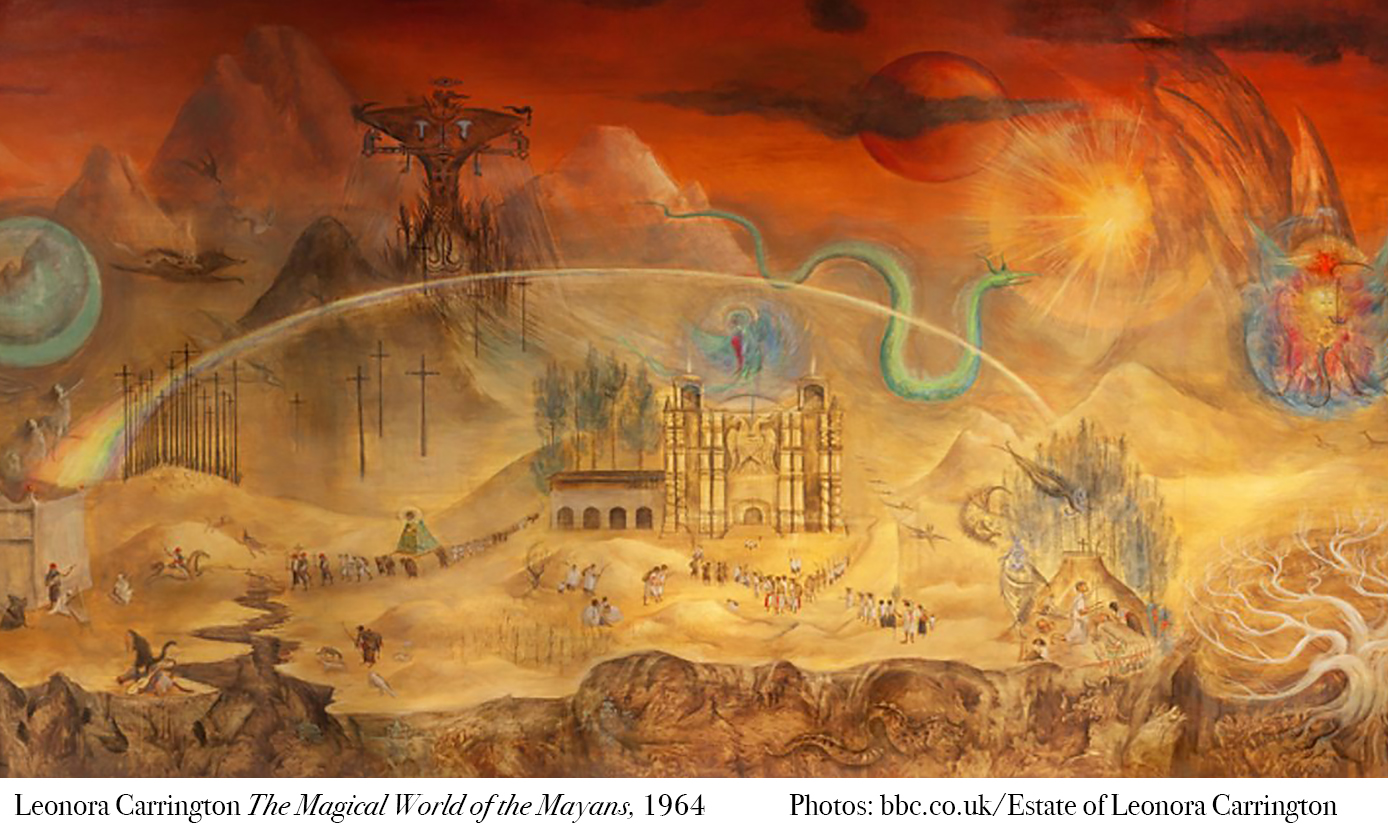 The Ethnographic Hall of Mayan Culture of the National Museum of Anthropology of Mexico houses on its walls this mural painted by the artist during her stay in Chiapas, where she lived with indigenous populations and met the anthropologist Gertrud Bloom to understand the fight for deforestation of the Lacandon Jungle. Divided into three levels, representing the kingdoms of the Mayan world, the mural combines images originating from the Popol Vuh with observations of the customs and traditions of the Mayan peoples. 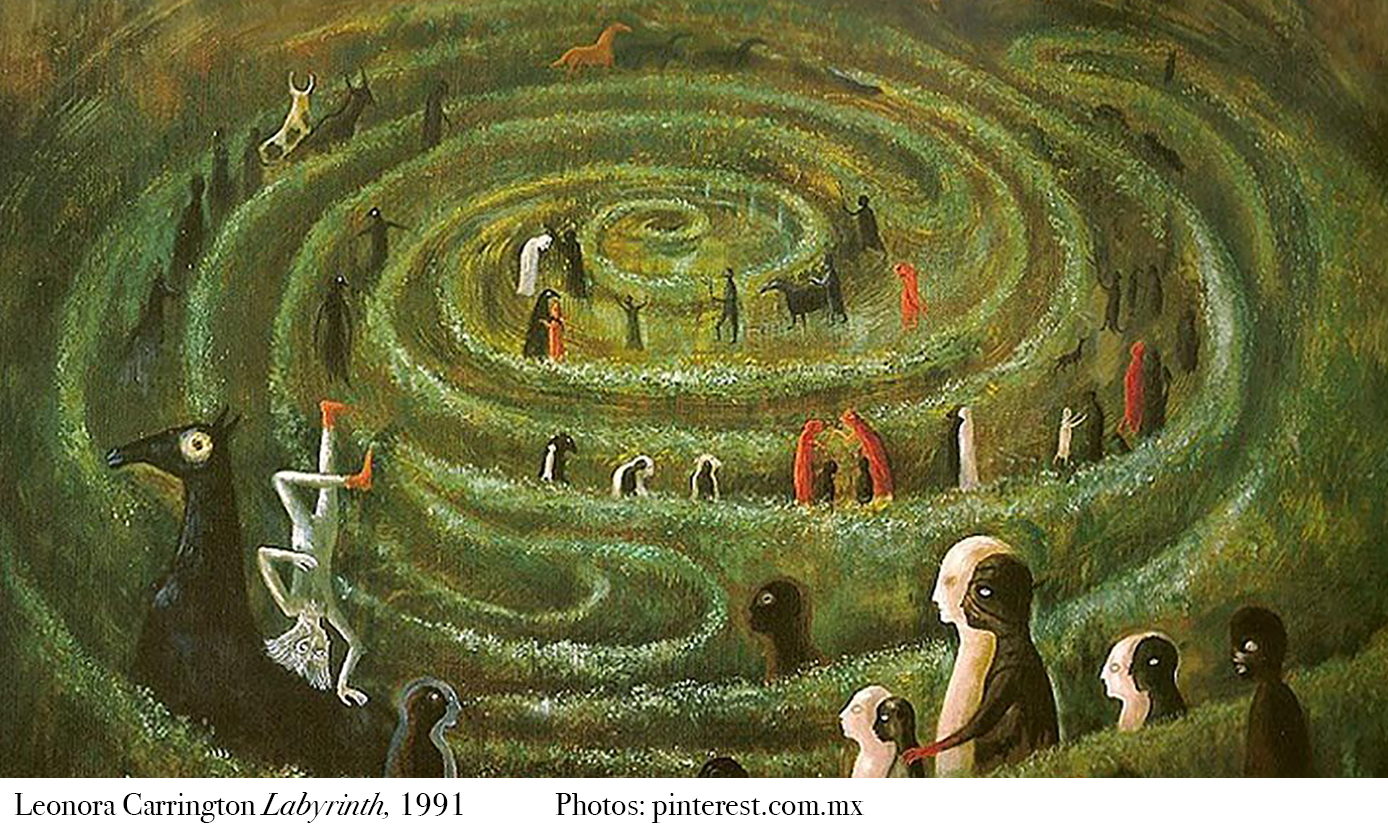 The Mexican artist was part of the feminist movement in Mexico. Among her feminist works, the poster Women Consciousness can be remembered. In March 2018, the Leonora Carrington Museum was opened at the San Luis Potosí Center for the Arts and in October of that same year, another headquarters was born within the Museum in Xilitla. The artist’s paintings have been auctioned for up to $ 713,000, such as The Juggler (1954), sold by Christie’s in 2005. Labyrinth somehow synthesizes Carrington’s creative mind: a spiral passageway inhabited by fantastic creatures that traverse a journey where it is not known if they want to leave that place or enter it to live there forever.