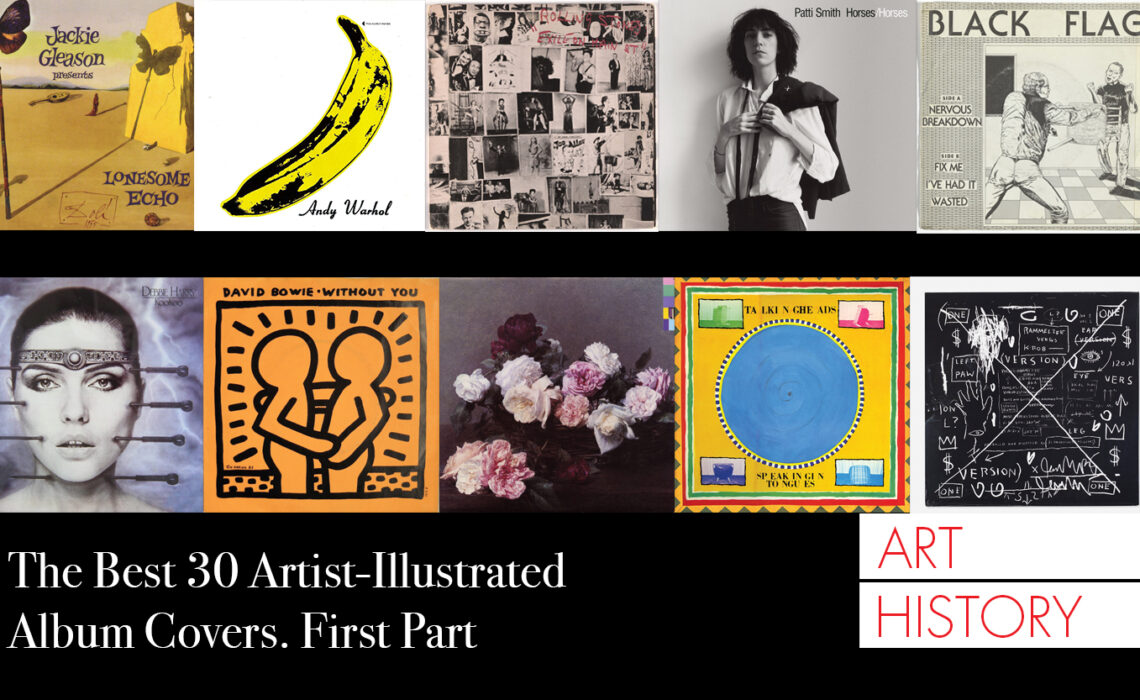 The relationship between music and the visual arts has resulted in covers that not only illustrate musical content, but could even be part of a museum. As, in fact, it happens in some of the works that we have recovered. We selected the 30 most outstanding albums for their artistic images and ordered them chronologically. In this list we show only the first 10.
If you want to review the next 10, click this here: https://www.sybariscollection.com/the-best-30-arti…vers-second-part/ 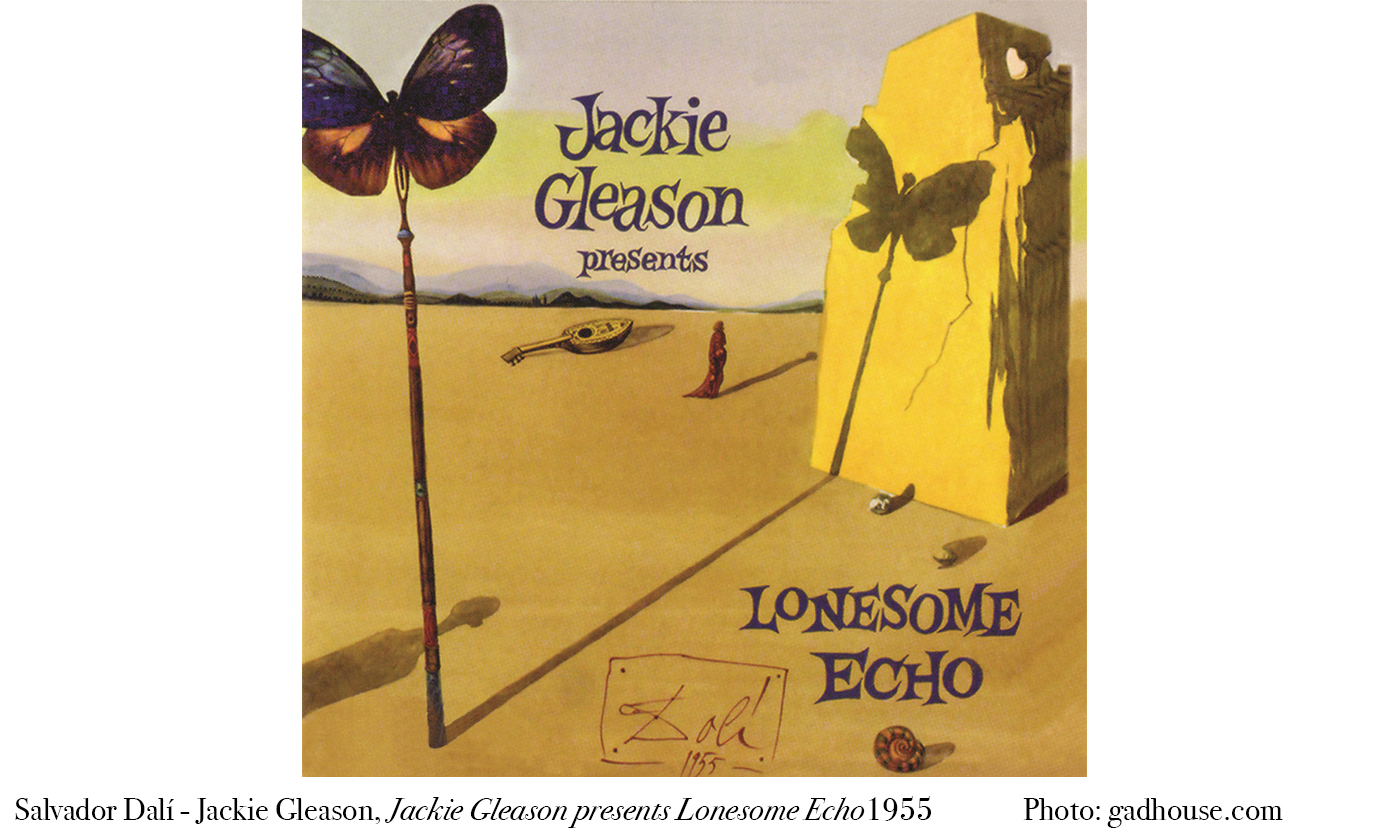 Jackie Gleason was a successful American actor and comedian who dabbled in music between 1950 and 1970: he produced around 60 ambient records played by an orchestra. For his ninth album – from 1955 – Jackie Gleason presents Lonesome Echo commissioned Salvador Dalí to design the cover: a surreal desert where unusual and misplaced objects meet. In the foreground there is a kind of cane with a butterfly at the base, its shadow is reflected in a ruined yellow structure. On the floor, 3 snails. In the background, a person in a robe next to another with a lute on the ground.

The Surrealist painter wrote on this cover: “The first effect is that of anguish, space and loneliness. Second, the fragility of a butterfly’s wings, casting long shadows in the afternoon, reverberates in the landscape like an echo. The feminine element, distant and isolated, forms a perfect triangle with the musical instrument and its other echo, the shell ”. This album was very popular in its time, with great sales successes. It stayed for several consecutive weeks at the top of the Billboard charts. 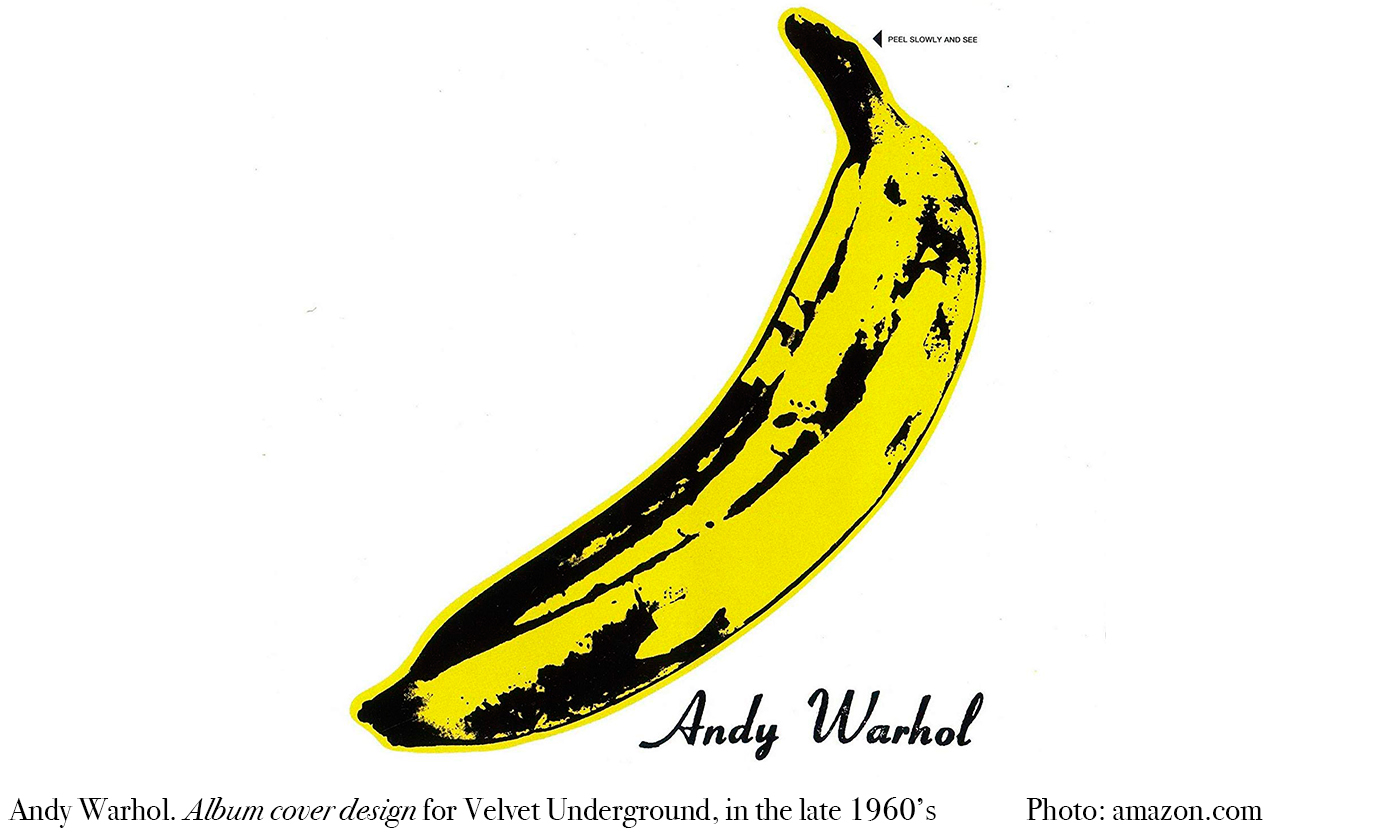 The Velvet Underground’s debut album contains one of the most iconic covers in history. Recorded during 1966 while the band participated in Exploding Plastic Inevitable (a series of multimedia shows where Warhol – manager and producer of the group – projected his films while other artists were performing), in the first versions of the cover listeners could “peel” the banana to discover a deep pink color inside. (These editions are very valuable because they are considered collectible). The album took a year longer than expected to hit the market due to the complex production of the cover. Ironically, the debut was a sales failure and garnered bad reviews; today it is considered one of the great rock records. In 2012 John Cale and Lou Reed sued the Andy Warhol Foundation for a copyright infringement. Although a part of the lawsuit was dismissed, both instances reached a confidential agreement. 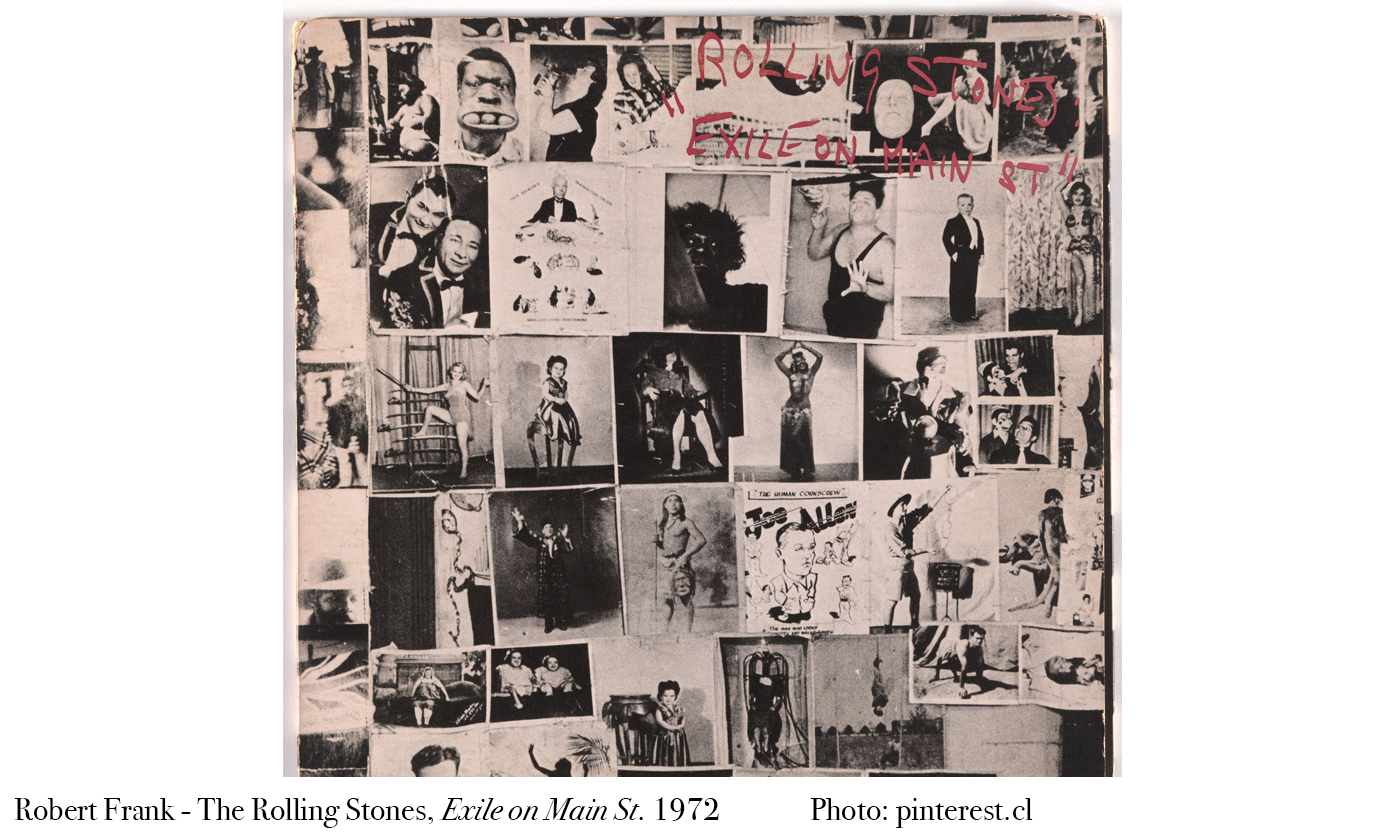 Exile on Main St. is the tenth studio album by the English rock band. The cover is an image by Swiss-American photographer Robert Frank, artist of the contemporary beat generation of Jack Kerouac. Frank sought to unveil the “other America”, that of the postwar period, that of social and racial classes. During 1955 he traveled throughout the country taking more than 27,000 photographs. In 1958 he published his book The Americans, which catapulted him to fame. In 1971 the Rolling Stones hired him to do the cover of their album. Despite having taken a photo shoot for them that will serve as the art for the album, they ended up using an image that Frank took during his trip around the country: a selection of postcards of circus “phenomena” taken outside a tattoo shop. They liked Frank’s work so much that they hired him to record their 1972 tour, which ended up becoming the controversial documentary Cocksucker Blues. The album cover had originally been commissioned from surrealist artist Man Ray, who was inspired by the song “Tumbling Dice” for his proposal, but he increased its price at the last minute, which made the band not continue working with him. 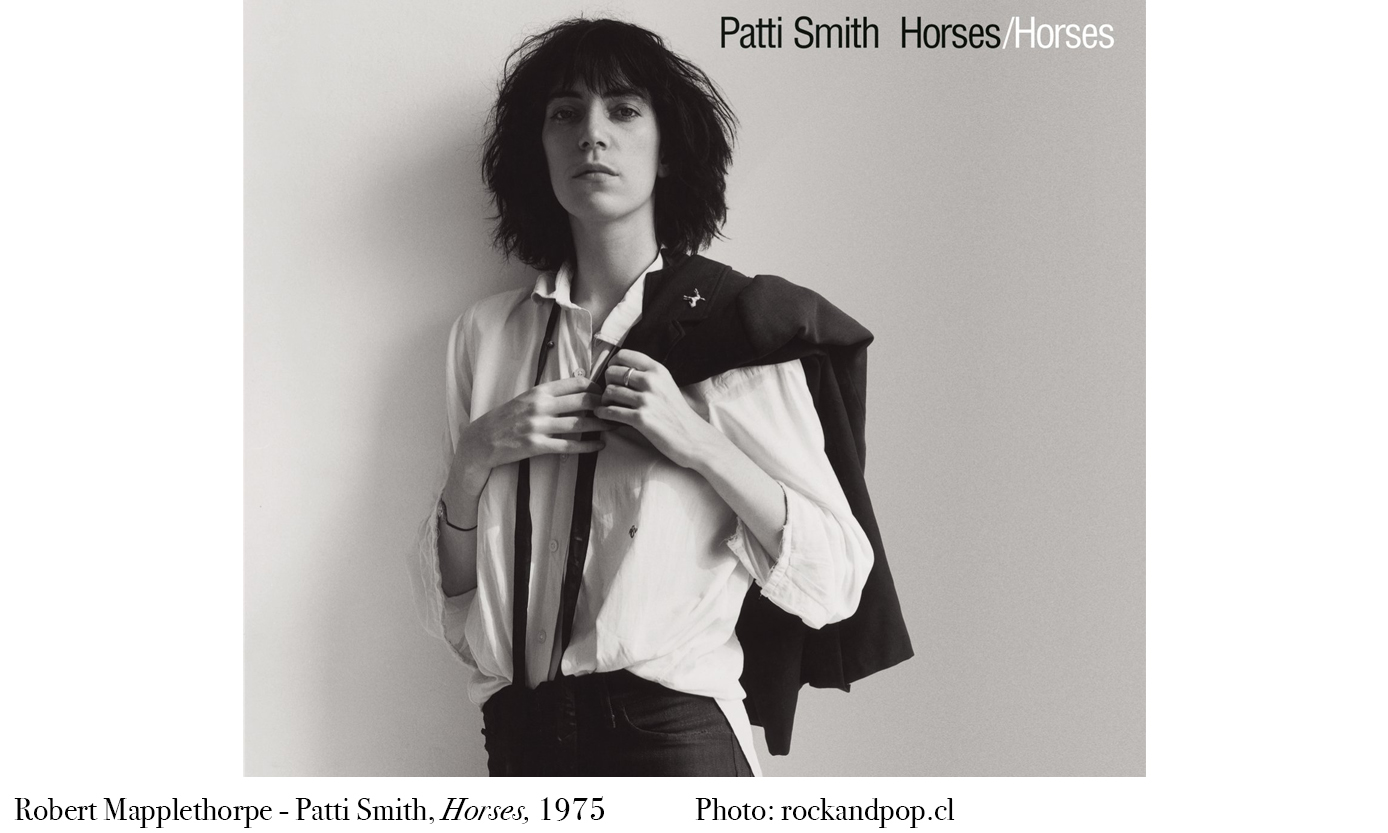 Horses was Patti Smith’s legendary debut album. Robert Mapplethorpe, her friend, lover and collaborator, took this photograph with natural light in a very personal and intimate setting within the singer’s apartment. Her pose, as she tells in Just Kids (2010), is a combination between Sinatra and Baudelaire. In 1979 Mapplethorpe and Smith worked together again, this time on Waves, Smith’s fourth album. The session was held in the same department of Horses. Photography and cover are part of the Tate Modern and MoMA collection, respectively. Mapplethorpe died of AIDS in 1989. 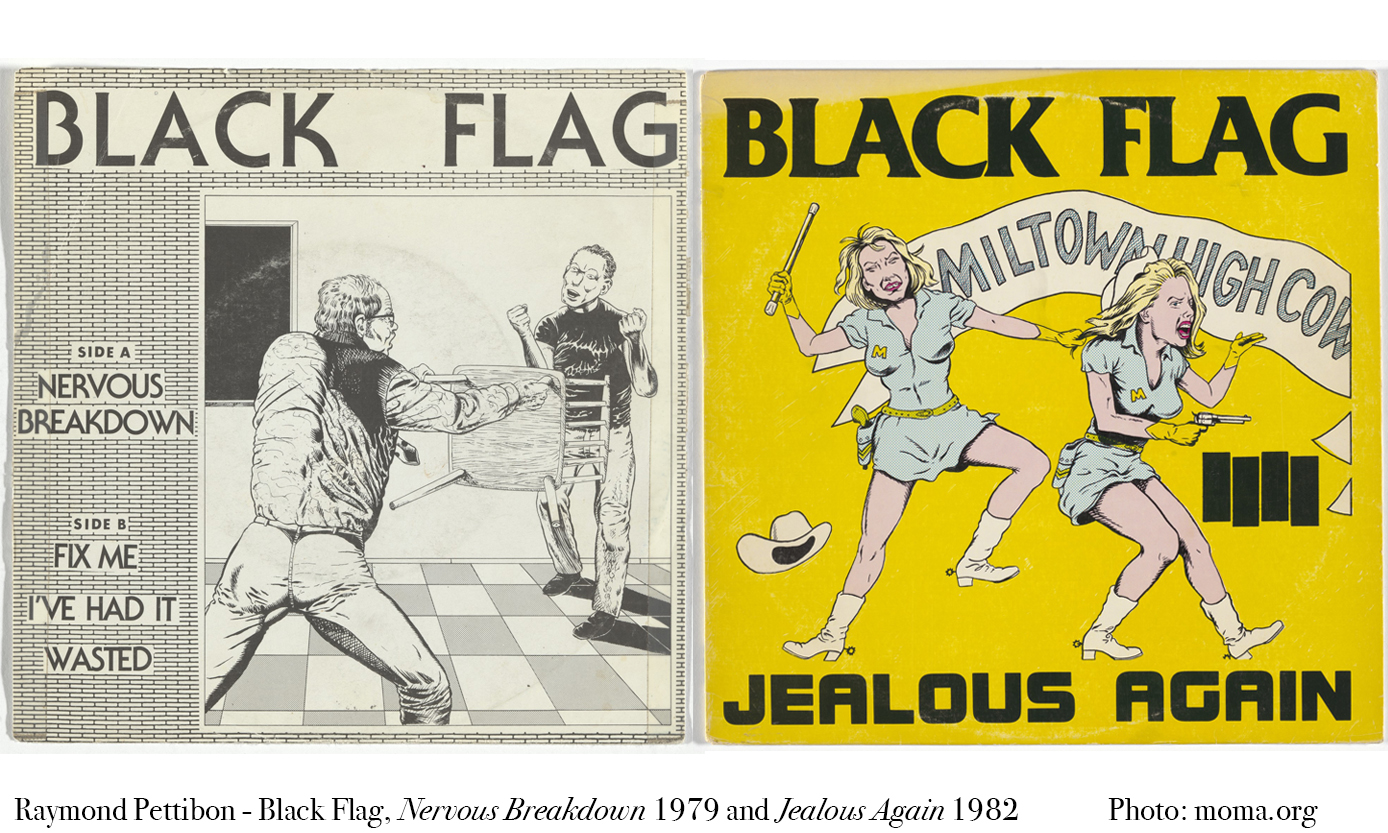 The American artist Raymond Pettibon is known in the 90s California punk and rock scene for having made covers, logos, flyers and posters for various cult bands of the time. In the late 1970s and early 1980s, he shot the image of Nervous Breakdown and Jealous Again, Black Flag’s first two EPs, whose founder, guitarist, and songwriter, Greg Ginn, is his brother. This collaboration was so important that Pettibon’s style completely marked the graphic image of the band. Both covers are part of the MoMA heritage. 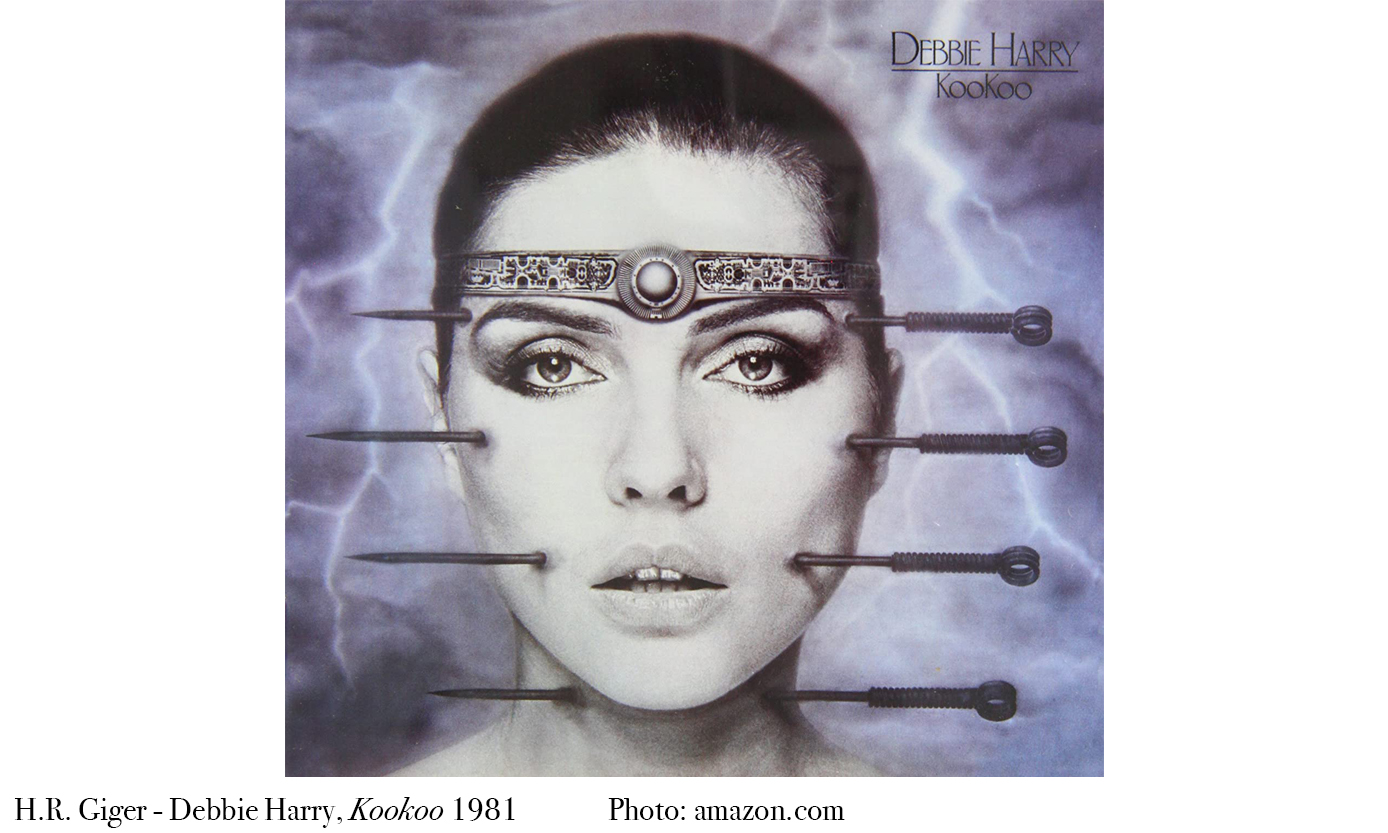 Kookoo is Debbie Harry’s solo debut, best known for her singing role in the iconic American band Blondie. The cover is the result of the fusion of a photograph by Brian Aris and the design by H.R. Giger -responsible for the creation of the mythical creature from the Alien saga. In his own words, Giger mentions: “Since I had hardly had an acupuncture treatment done by my friend and doctor, Paul Tobler, the idea of ​​the four needles came to me, in which I saw symbols of the four elements to be combined with your face.” The Swiss artist also directed the videos. “Now I Know You Know” and “Backfired”. 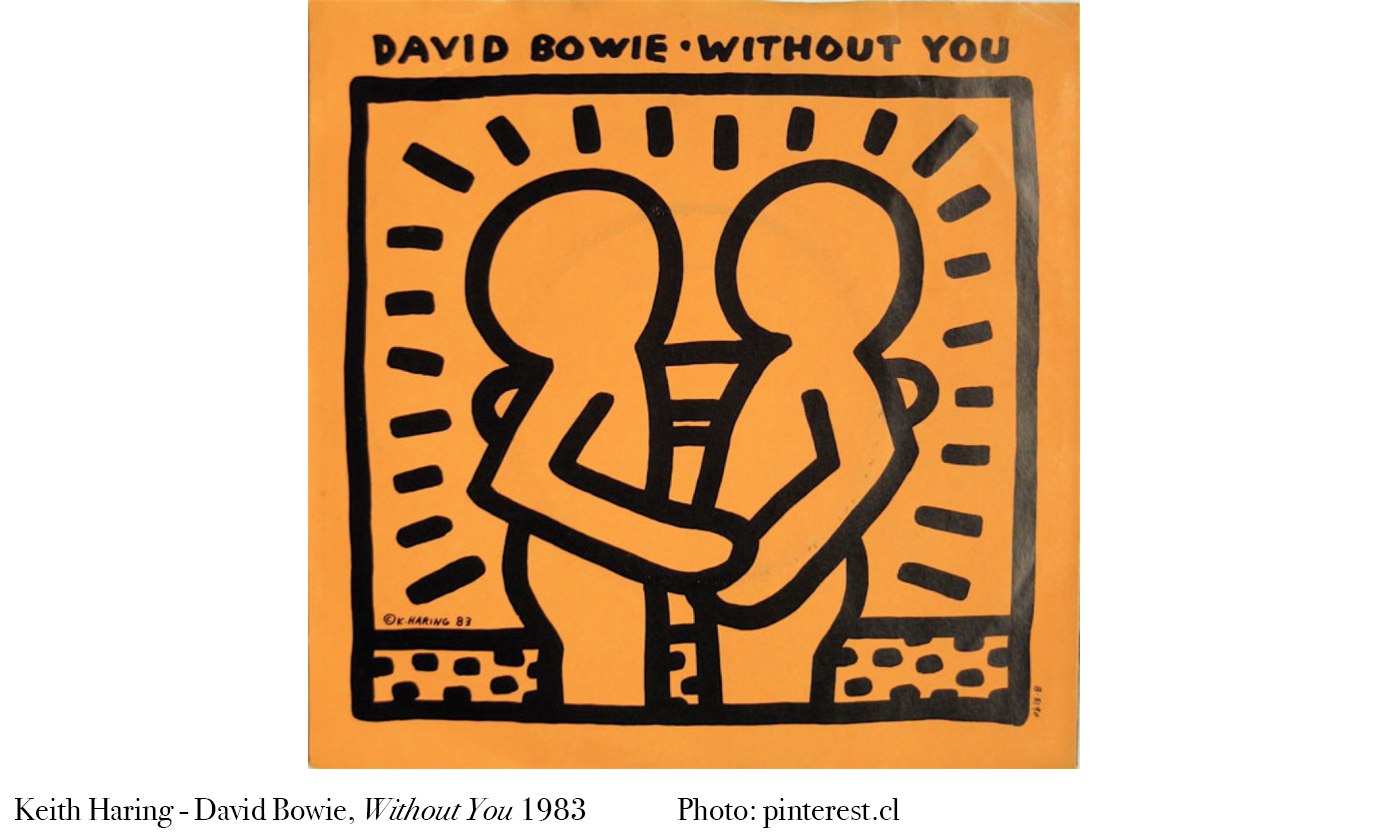 David Bowie was always close to contemporary art. In addition to his self-portraits, he worked on a series of projects alongside Damien Hirst that range from humor to surprise to entertainment. This cover for the single “Without You”, which is part of the Let’s Dance album, synthesizes the aesthetic interests of the artist born in Pennsylvania in 1958: playful figures devoid of attributes that seem to have been drawn by a child on a wall or a notebook notes. The song belongs to one of The Thin White Duke’s underrated albums. 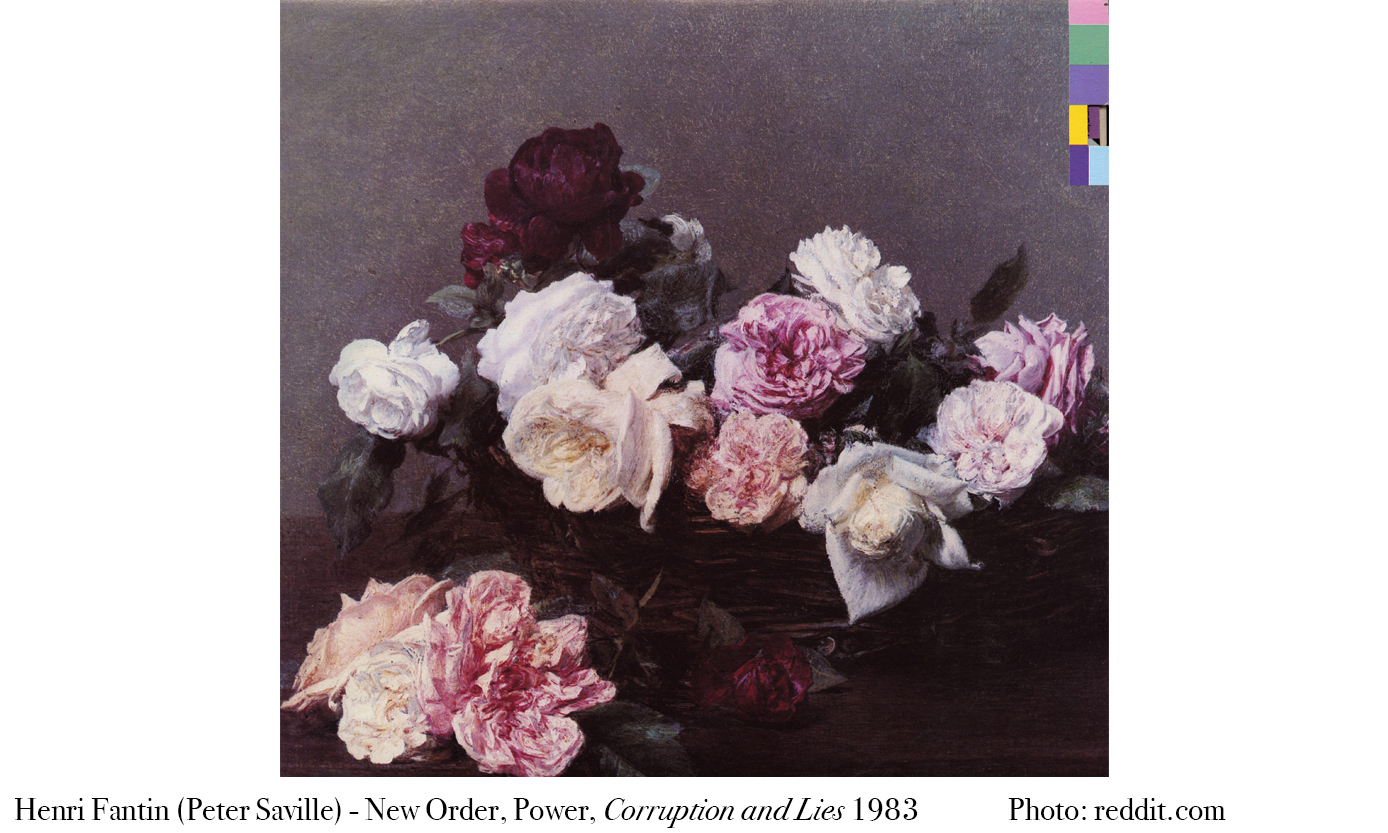 The story is as follows: Peter Saville, creative director of New Order, was looking for this cover a Renaissance portrait of a dark prince, adhoc with the Machiavellian title of the album. Saville himself tells it: “I was with my girlfriend while I was holding a postcard of the Fantin-Latour flower painting. So she said to me, ‘Aren’t you thinking about that for the cover?’ It was a wonderful idea. The flowers suggest the meanings by which power, corruption and lies infiltrate our lives. They are seductive.” A Basket of Roses was made by the French painter in 1890 and is in the National Gallery in London. The squares at the top right of the cover are color-coded representing the band name and album title; the interior included a kind of decoder to reveal it. Saville’s most prominent works include iconic covers of Unknown Pleasures and Closer by Joy Division. 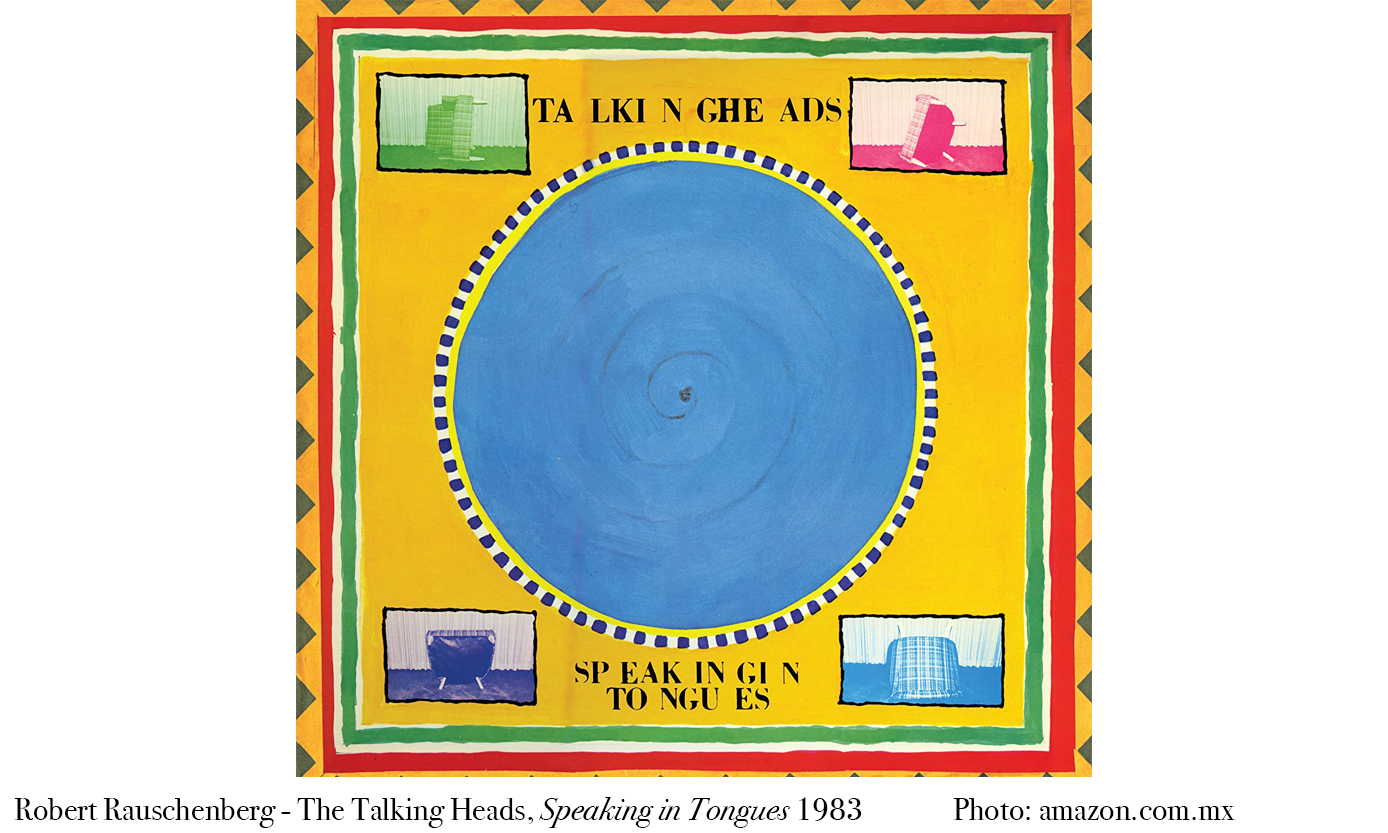 Talking Heads had little time to separate from Brian Eno. And its leader, David Byrne, was looking for new paths of aesthetic exploration. The result was reflected not only in their music but also in the image of the band. Rauschenberg designed a limited special edition inspired by the Revolver sculpture, which the artist signed in 1967, a series of silk-screened collages on five plexiglass discs that turn their motor on, turning and creating a kaleidoscopic effect. In the collages of the albums, three scenes are distinguished: a wrecked car, a billboard on a highway and a bedroom in a house in the suburbs. Due to the complexity of the production of the album, in addition to delaying the release, only 50,000 copies were made, making it considered a collector’s item. 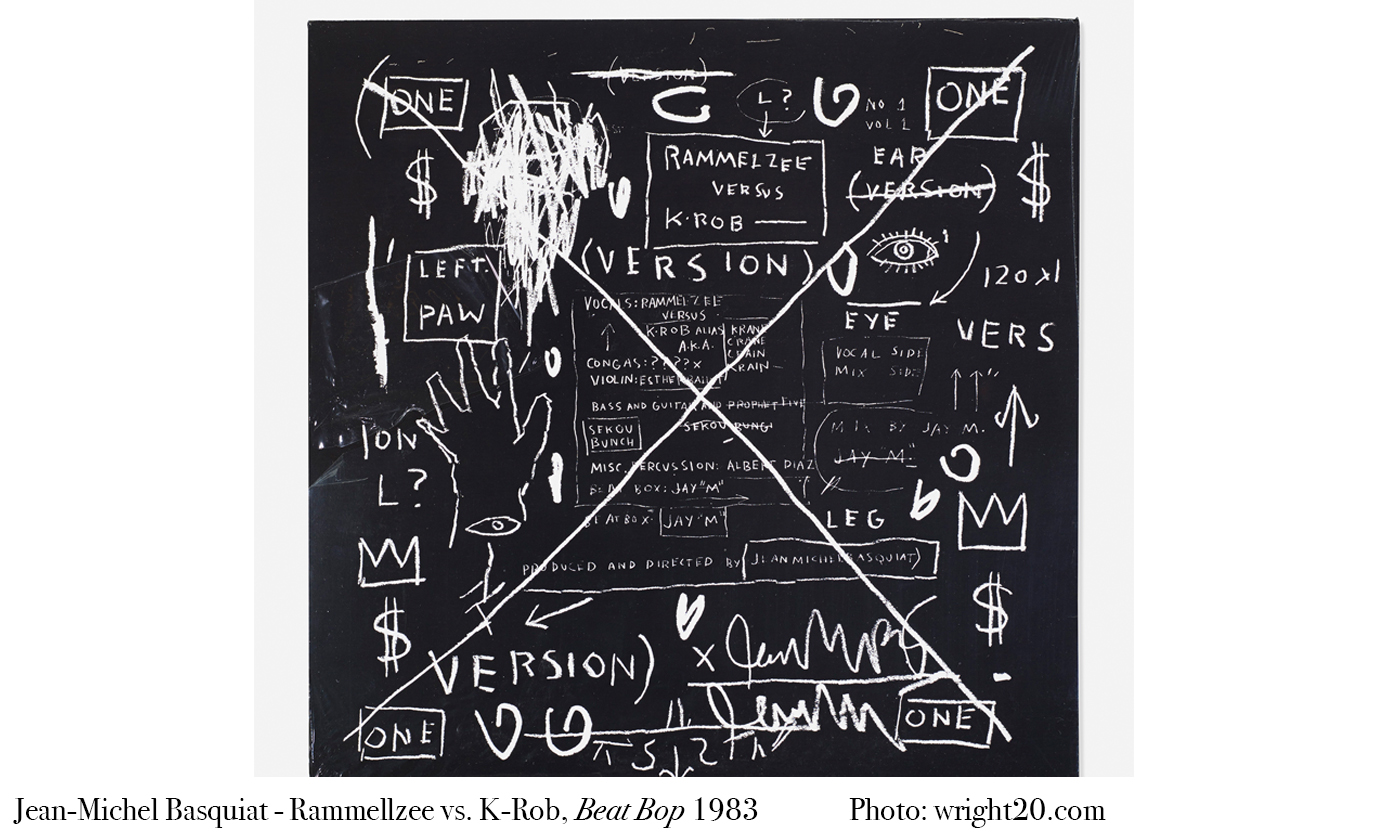 Jean-Michel Basquiat not only made the image for this album, but also produced it. It is a single where hip hop artists Rammellzee and K-Rob face off in a rap battle. It is said that Basquiat had also originally written the lyrics but that Rammellzee did not like it and preferred to invite K-Rob to collaborate on the album. Only 500 copies were made, so it has a high economic value in the market.