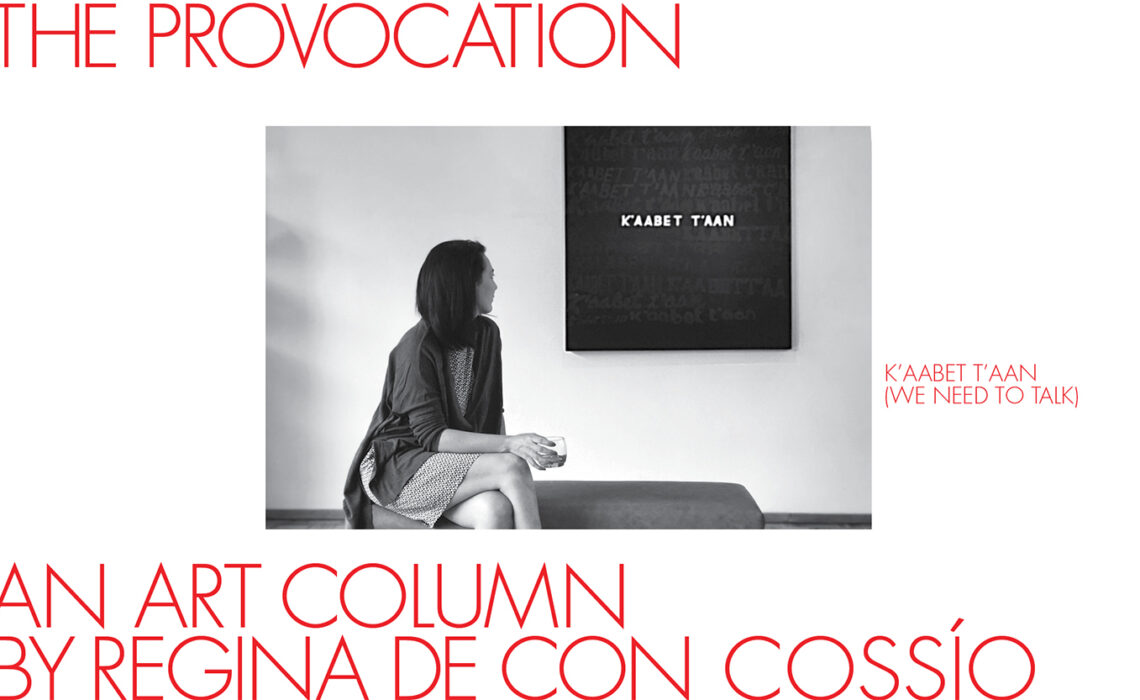 An Interview with José Chi Dzul

For José Chi Dzul, the visual arts are a space for experimentation to project ideas and discourses about the culture system, the art system and society in general. Born on July 16, 1990, his first approach to the visual arts happened through the label technique. “Although many think that it is not an artistic manifestation, I say the opposite because it has techniques and knowledge: there is an analysis of visual composition that provides a powerful message that abstract thought produces. For many it is only a job. However, working with signage is working with written language to connect experiences and thoughts. ”

José Chi Dzul studied visual arts at the Yucatan School of Arts (ESAY). Close to the interests of Lawrence Weiner and Barbara Kruger, his works produce forceful messages where the most important thing is read between the lines. Typography, composition and colors are not just decorative elements: they create meanings that go beyond the first meanings of words. “I really don’t have a specific format to conceive my works. Each project has to be in the format that it requires: it can be on a canvas, a wall, on the floor, on the ceiling … The words in Mayan are an instrument of powerful thought. For me it is the effective way to express my ideas. In my pictorial works I criticize the cultural system, the art system, the system in general. Everything is written in Spanish, English, German, Russian, Chinese, etc. Words written in an “indigenous” language (a word used in a racist and classist way) are seen as something exotic that reduces their value. We live in a Eurocentric world; many want to fit into it rather than empower their own culture. ”

A conversation with the past. Reinventing the present. The language as resistance. Labeling as a tool to fight against the colonization suffered by the indigenous people. Reckoning with the contemporaries what they destroyed from the past cultures. Disrespectful against the ancestral legacy, ILA Wilo’on (Let’s see us) can be read on one of Jose Chi Dzul’s (Yucatan, Mexico 1990) canvas. Who is “us”? The Mayan communities annulated by History.  The social asymmetry ought to be destroyed. Can we think of fairer relationships? Can we see “them”?

“In my pictorial works, there is a clear existence of contemporary Mayans. The last hundreds of years, Mayans were submerged in darkness. My paintings reflect the development of a nation that is gaining strength in reclaiming its territory. Prepare for a cultural revolution”, says the artist.

This cultural revolution begins in his own works. He links concepts such as writing and oral language to offer reflections on this indigenous culture.  His aim is the cultural decolonization. His paintings are filled with Mayan phrases melted with Spanish and English ones. “The Mayan language in my paintings is a clear way to exercise the inheritance, the knowledge of our grandparents. Where a legacy is present”.

He uses the freehand technique to label, making thoughts visible. Labels to erase Labels. What is the purpose of doing that? I asked:

“Labels are part of my art pieces; texts and the images are transformed into forceful messages. The words painted in Mayan convey a cultural identity and meaning, meaning that can be read anonymously or collectively”, replied Chi Dzul.

Thoughts that become words. Words turned out into sounds. Sounds transformed into images. Images into speech and finally, speech develops a political life.

KUXA’ANO’ON, we are alive. His work is an affirmation the culture he represents. His paintings speak for a nation, that will decolonize and recover its territory, as he wishes.

He finds his artistic inspiration in the works of Lawrence Weiner and Barbara Kruger; yet he claims not having a style, what I found particularly interesting. His purpose is rather to constantly look for new ways to solve problems that arise during the production of the work, while mastering the technique or in the simple conceptualization of the pieces.

His work was exhibited at The Chopo Musueum in Mexico City as part of “Los huecos del agua”; selected by Hyperallergic as one of the best 15 international exhibitions to visit during 2019.

Currently, the artist work for a project sponsored by Fonca and a collective exhibition in Trento, Italy.

We advise to keep an eye to this talented young artist. Available pieces by Chi Dzul can be found at our Art Boutique.