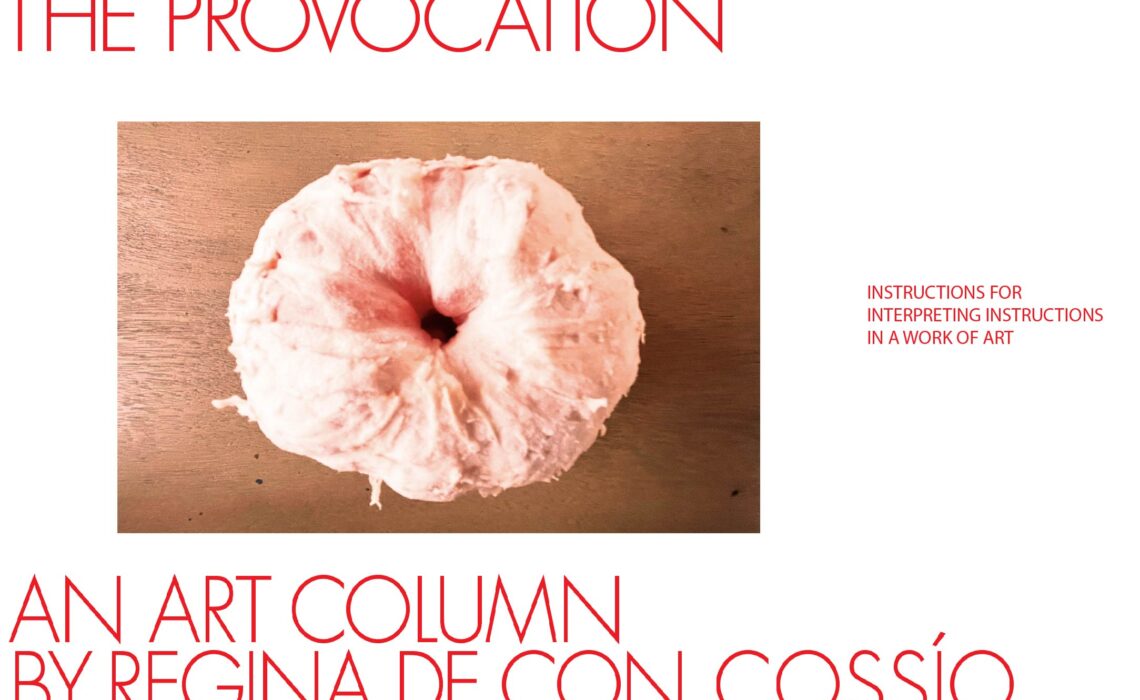 Drill a hole in a canvas and put your
hand out from behind.
Receive your guests in that position.
Shake hands and converse with hands.

The text belongs to one of the instructions that, in the sixties, Yoko Ono made as part of an artistic process that was recorded in the book Grapefruit. The instructions for use in art were born around that decade, with Yoko Ono, but also with Sol Lewitt. And they are fundamentally associated with conceptual art, a movement in which we can also mention other names such as Marcel Duchamp or Man Ray.

1. Who is the author?
An artist creates a work in his/her mind. Later, reconstruct the way it should be done. List the materials. Recreate one by one the steps necessary for the work to materialize it. Then, write a manual for the work to be executed by other artists, workers, gallery owners or any spectator. When someone reads the instructions and executes the work, who is the author? Some instructions can encourage participation by the performer as part of authorship. In that sense, when the instructions are risky enough, they call into question something more transcendent for art.

Instructions
(Do not try to answer the following questions, dear reader, but remember them. Once you have specified them, write them down in a notebook: is the author a person or a figure that can be made up of several people? Can the authorship change according to the context in which the work is performed? What is the relevance of the place and time in which the instructions are carried out? Is the artwork the idea or the execution? Burn the notebook. Take it off the fire 10 minutes later. Say it is a work of art. Auction it. Become a millionaire. Deny works that use instructions for use to function.)

2. The original vs the copy
A work of art is an idea. Then, its construction process is described on a piece of paper. Another person executes the artwork. It materializes it, let’s say. It makes it real. But in another part of the world and, perhaps, in another time, a different person takes the same instructions and replicates the work. Both works look the same. Its dimensions are the same. What is authentic? Are they both or just the first? What if authenticity is the idea that arose in the artist’s head? Although it may not seem like it, many of today’s works are executed by instruction. The author makes a series of indications. Send an email with the necessary steps to carry out the work. The gallery or museum follows these instructions. Then they show it to a wide audience. There is a possibility that a collector will acquire the work.

Instructions
(If you are the collector, ask yourself the following: is the artist’s idea the same that you own and that you can see in your living room? Do you think that a gallery worker could omit an aspect or use a different material? Is there a possibility that one of the gallery interns has stolen the email with the instructions, traveled to the other side of the world, replicated a work exactly the same and is selling it as the original? Only if you are the collector: travel to that part of the world. Find an intern. Kill him.)

3. Literature and art
Roland Barthes said it: non-isochronic languages ​​need to be unfolded to be interpreted. How necessary is Roland Barthes’ theory to interpret an instructional work of art?

Instructions
(Do you know this is a non-isochronic language? Read Roland Barthes’ Elements of Semiology. Accept that you will not understand 80 percent of the concepts of semiology. Take a course in semiology. Leave it halfway. Pick it up. Take a course Introduction to semiology. Look up what semiology is on Wikipedia.)

4. The writing
In a work of art with instructions for use, the (written) instructions are part of the work. In this way, the viewer first becomes a reader who must understand the writing in order to recreate the work. Are writing and art part of the same work or are they two different languages?

The following artistic exercises by María Cerdá, Karla Leyva, Paola de Anda and Fernanda Barreto are part of a Circular initiative to create actions that, on the one hand, link the artists with the audience and, on the other, link the digital world with the real world.