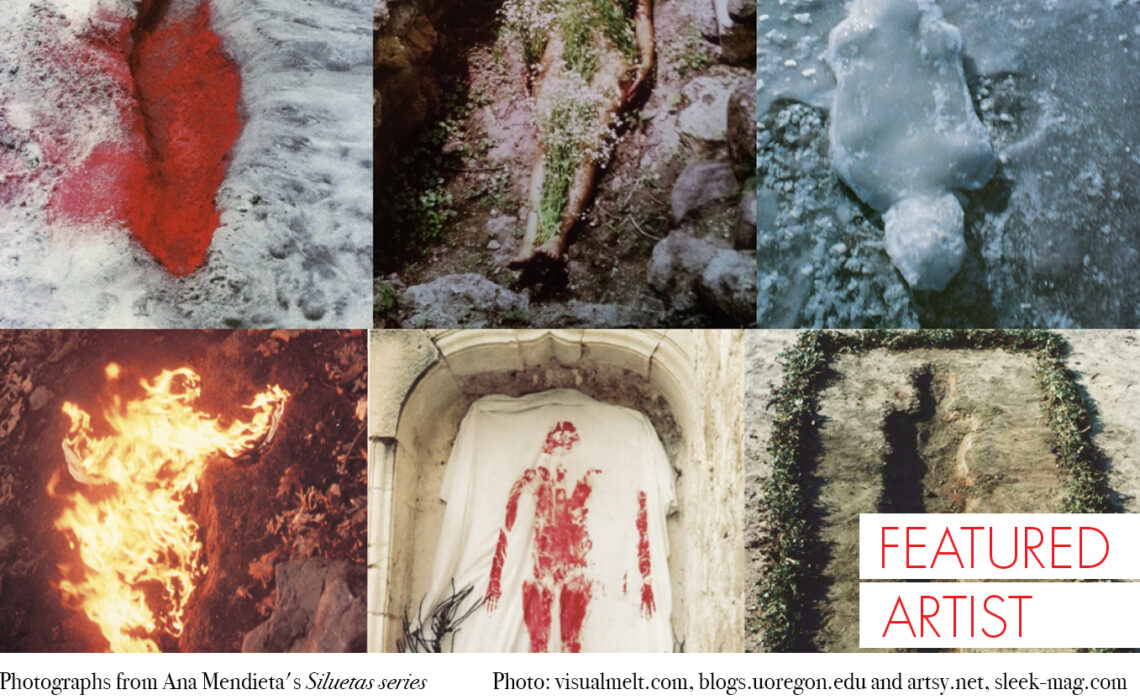 The phrase “the personal is political” is frequently associated with second-wave feminism in the U.S. It was important to radicalize the notions of intimacy, reproductive labor, wage inequality and bring forth to political territories what was considered private matter.

However for Latin American women, sometimes it can be interesting to reverse the question: How does the political become personal? This and other questions are the ones that migrated to the varied practices of female performance artists in countries like Venezuela, Brazil, Mexico or Colombia. Their work represents the different forms resistance can look like and continues to be relevant as time passes. Some of their performance work was included in the groundbreaking exhibition: “Radical Women: Latin American Art, 1960–1985”, curated by Cecilia Fajardo-Gil and Andrea Giunta.

Here are the Five Latin American performance artists you should know:

Ana Mendieta. Born in Havana (1961), aged 12, she emigrated with her fifteen year old sister Raquelin to the United States through a collaborative program between the US and Catholic Charities labeled Operation Peter Pan. They both ended up living in Iowa, their first years spent in foster homes and orphanages. Later on Ana Mendieta would develop an artistic practice consisting of an autobiographical narrative, especially with her Silueta series (1973-1980), which consisted of her creating silhouettes in mud, sand and grass with natural materials.

“I have been carrying out a dialogue between the landscape and the female body (based on my own silhouette). I believe this has been a direct result of my having been torn from my homeland (Cuba) during my adolescence. I am overwhelmed by the feeling of having been cast from the womb (nature). My art is the way I re-establish the bonds that unite me to the universe. It is a return to the maternal source.”

Patssi Valdez: Born in 1951, is a Chicana artist living in Los Angeles. She was a founding member of an important group in East L.A. known as Asco. Together they explored different mediums such as photography, performance art and graffitti. With the series of works titled No-Movies, the group evoked cinematic codes in a way that was critical of the Hollywood industry. Valdez could become a star in a star-system that excluded other identities. Patssi Valdez was a symbol of glam, revelry and political resistance.

Martha Minujín. Marta Inés Minujín was born in Buenos Aires in 1943. An avant-garde artist during the 1960s all through the 1980s in Argentina, she was an important figure for the counter-culture. Through pieces she named arte-acción (action-art) and happenings, she reconfigured and questioned the limits of making one’s life into a work of art. Cabalgata was one of her televised happenings, transmitted through channel 7. It consisted of a group of horses that had cans of paint tied to their tails and began coloring mattresses, at the same time a group of athletes popped balloons while two rock musicians were wrapped with adhesive tape. She was an important member of the prolific Instituto Di Tella.

Victoria Santa Cruz. She was an Afro-Peruvian choreographer, composer, and activist born in 1922. She helped to found the Cumanana Company, and through research tried to reclaim lost heritage and dying rhythms such as the zamacueca, the landau, amongst others. One of her most famous performances is the recitation of the poem Me llamaron Negra (They called me Black) from 1978. It became an important moment to describe the racialized experience of afro-descendants in Latin American communities through rhythm and oral tradition.

Polvo de Gallina Negra: It was a feminist art group founded by non-objectual mexican artists Maris Bustamante and Mónica Mayer in 1983. After turbulent student riots during the 1960s in Mexico a new generation of artists emerged with an interest in collective practices, they were labeled The Groups. Polvo de Gallina Negra questioned Mexico’s machismo culture and the role of women in mass media through humor and practices that involved their private lives. For ¡MADRES!, a long-term project of questionings regarding motherhood, Mayer and Bustamante decided to get pregnant at the same time. Other works related to this project involved people writing letters to their mothers with everything they wanted to tell her but never dared to.

“I became interested in feminism as an art student, when after a lecture on women artists, my fellow-male students said that women were less creative than men because we gave birth. Considering these were artists from a very liberal, politicized, generation, I realized unless I did something about it, no matter how good my work ever was, it would never be seen on equal terms. After that, a group of women friends from school started meeting and integrating these ideas to our work.” – Mónica Mayer.