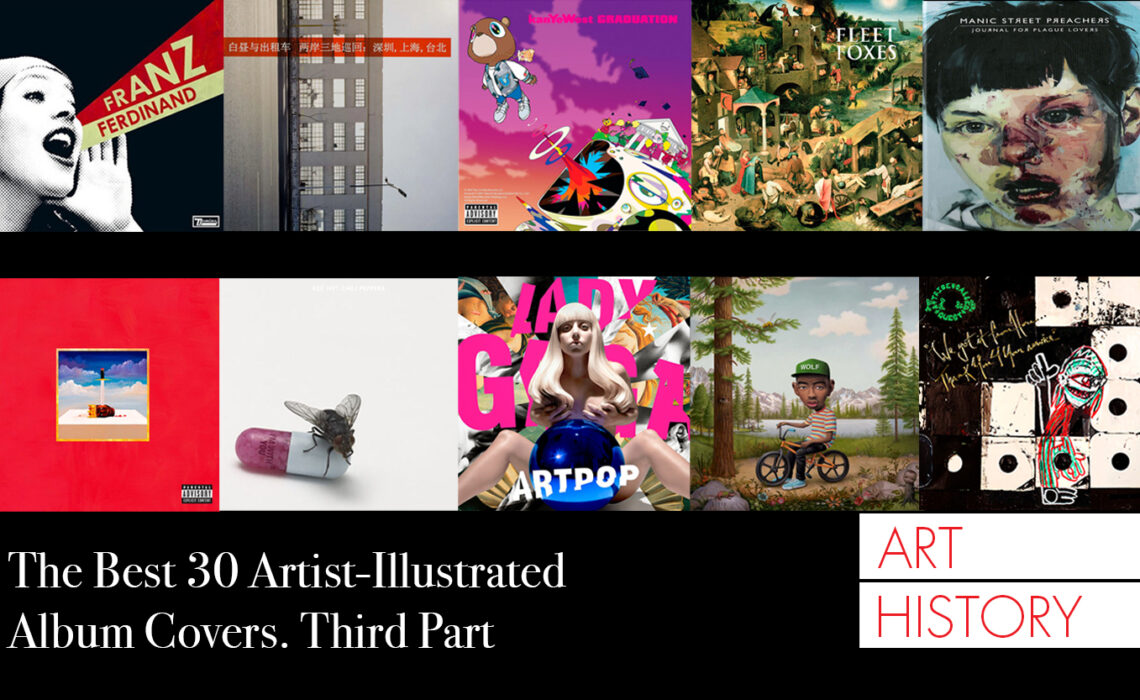 The relationship between music and the visual arts has resulted in covers that not only illustrate musical content, but could even be part of a museum. As, in fact, it happens in some of the works that we have recovered. We selected the 30 most outstanding albums for their artistic images and ordered them chronologically. In this list we show only the last 10.

If you want to review the top 29, click this here: 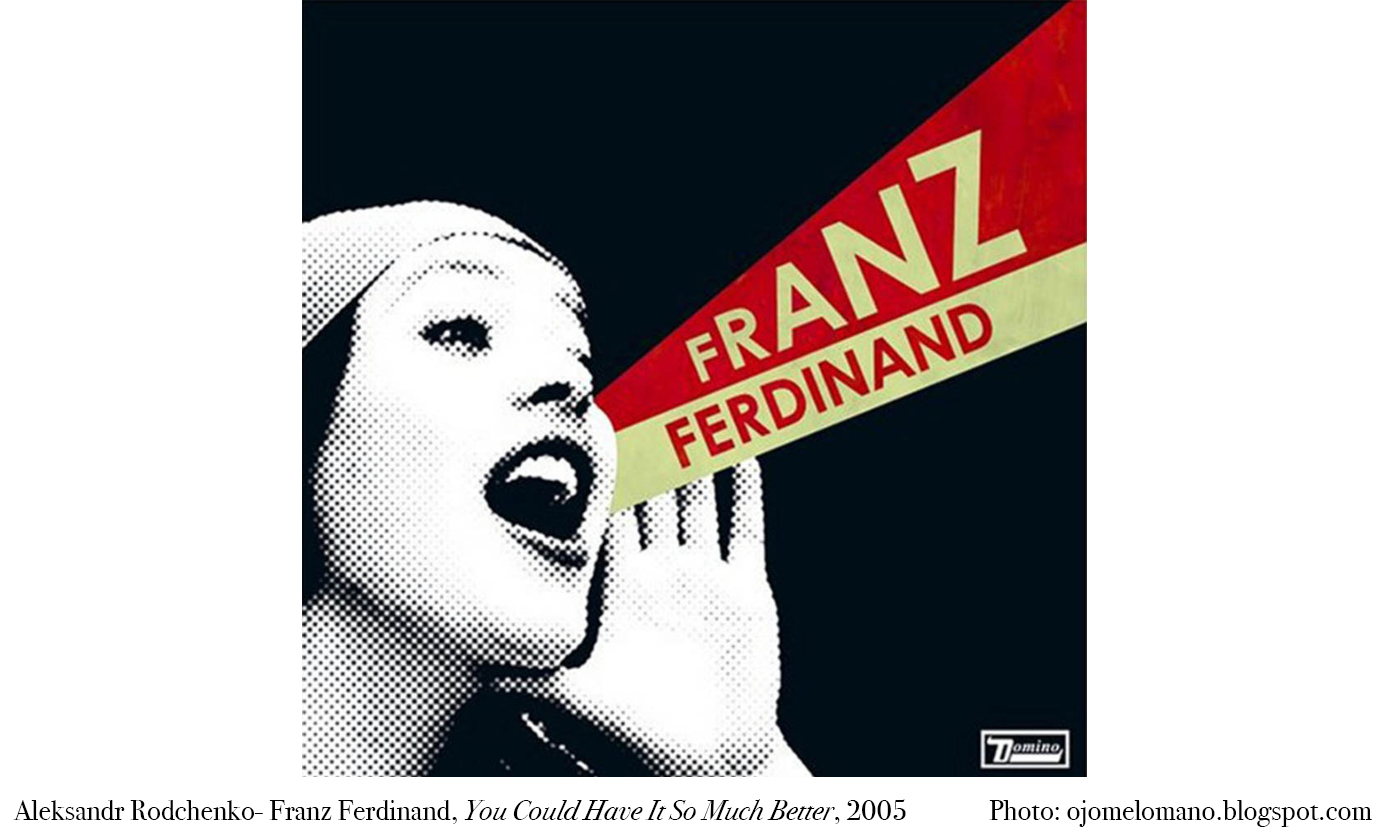 10) Aleksandr Rodchenko- Franz Ferdinand, You Could Have It So Much Better (2005)

Aleksandr Rodchenko and the Russian avant-gardes were the inspiration for both the cover and the set and videos of this time by Franz Ferdinand. Lilya Brik’s 1924 image served as the basis for this cover, changing the shades of the original model for green, red, black, and white to create a pop art effect. In the former Soviet Union of 1923, the advertising agency Mayakovski-Rodchenko Advertising-Constructor unveiled one of the most iconic designs in the history of art. Through their geometric shapes and pure lines, the members of the Glasgow native band found in this identity one of the pillars to reach third position in the UK popularity charts. 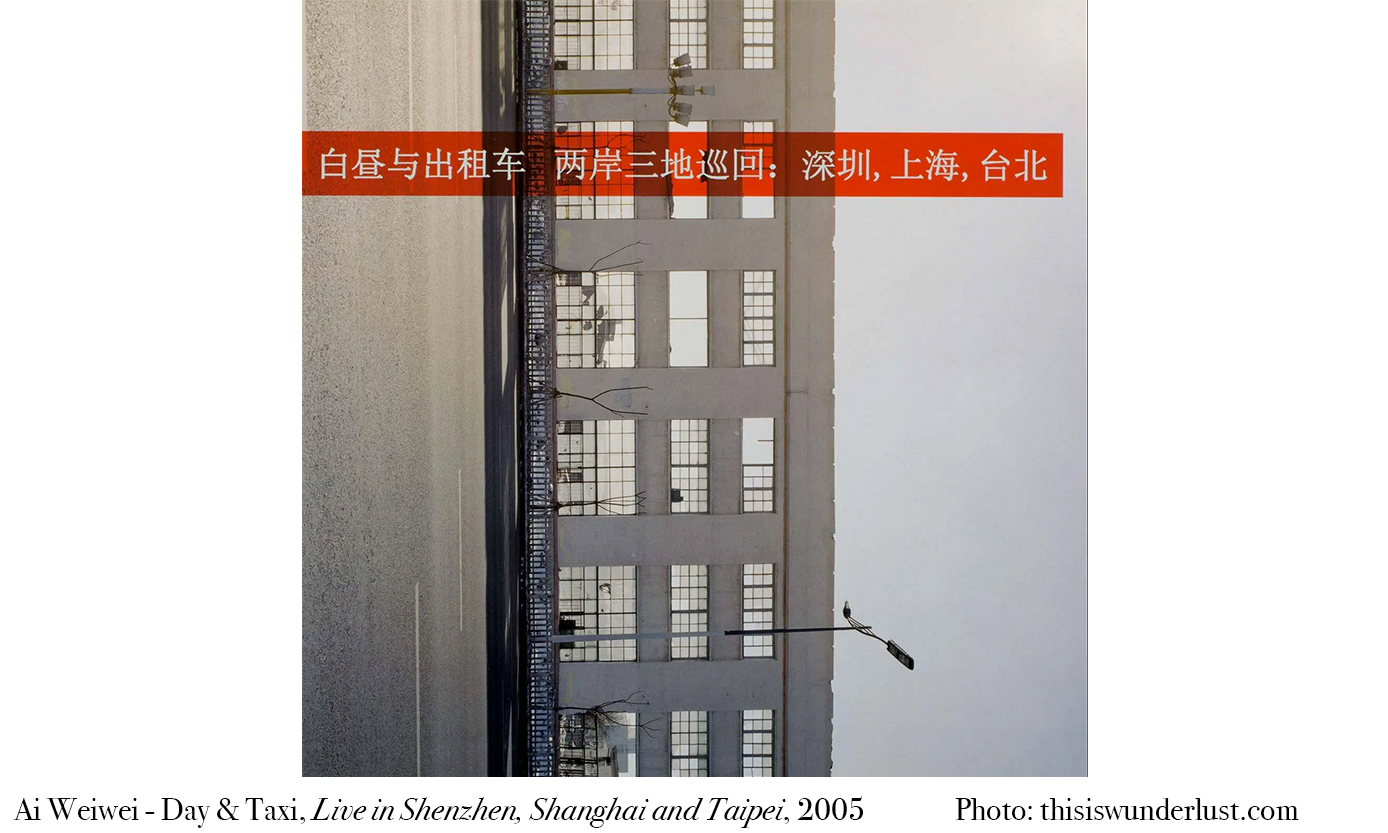 Ai Weiwei is a total artist. To his aesthetic proposals are added political, social, economic and … musical purposes. In this collaboration for the Swiss band, the Chinese artist projects an image that synthesizes the band’s tour through China, which included  the National University of Taipei, as well as Shanghai and Shenzhen: a 2005 photograph that belongs to an untitled series where he documents the urban growth of Beijing. The band consisting of Christoph Gallio, Silvan Jeger and Gerry Hemingway – which fuses interests of avant-garde jazz and contemporary music – have collaborated with other artists for their album covers, including Alex Katz, Gilbert & George and Yoshitomo Nara. 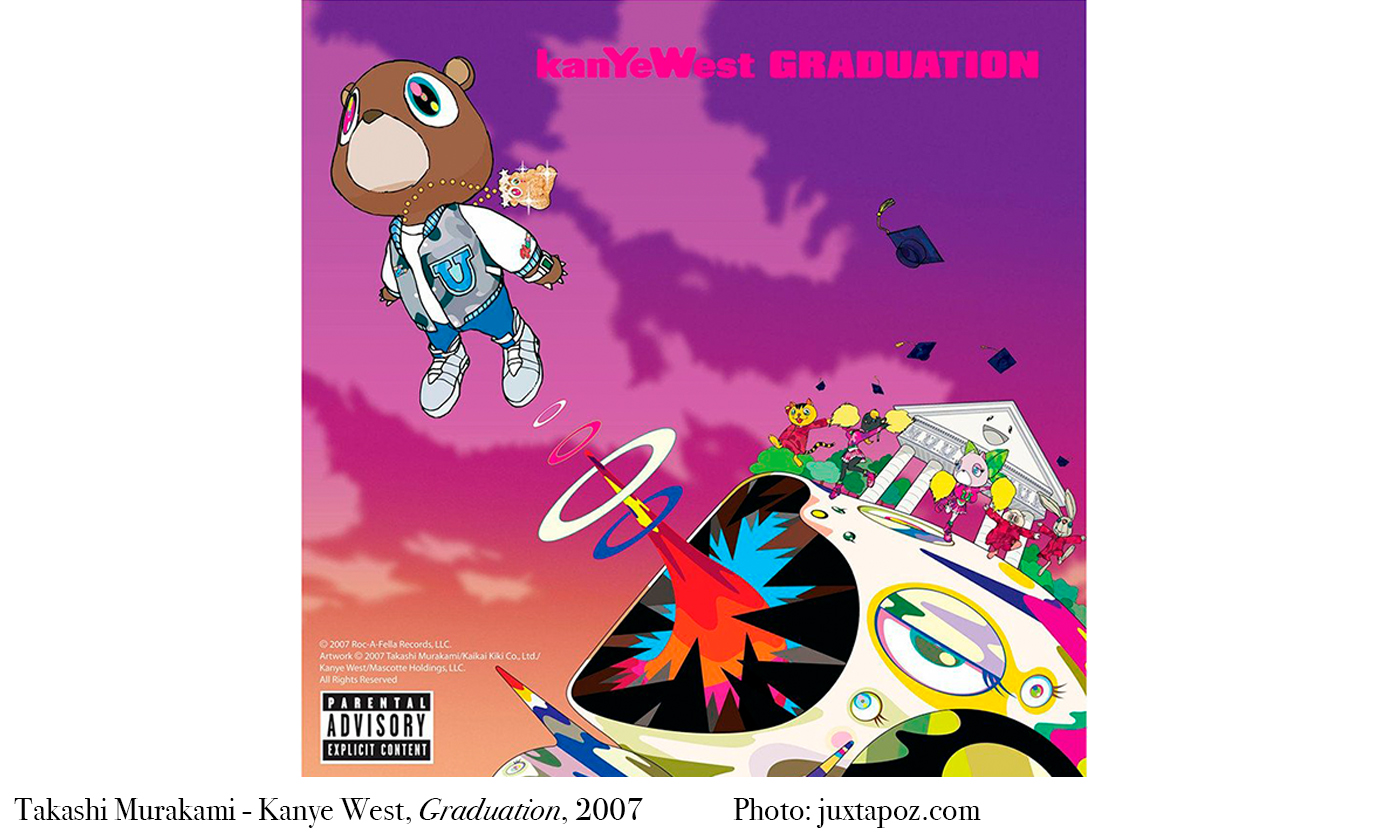 Takashi Murakami and Kanye West achieved in this album a visual power uncommon in today’s music. They not only collaborated on the cover of Graduation but also on the video “Good Morning”. The American rapper is known to have used a bear during his early albums as a kind of personal insignia. Beyond the reasons why he did it, Murakami appropriated the animal to give it a playful and artistic appearance. In an interview, the artist born in Tokyo in 1962 mentioned that “the cover is based on Kanye’s student life. It is a place of dreams, of justice, a place to have fun. It is also, occasionally, a place where you experience the rigid dogma of the human race. Kanye’s music combines sentimentality and aggressiveness like sandpaper, and uses its rhythms to unleash this tornado that spins with the spirit of the time. I also wanted to be swept up and turned in that tornado.” 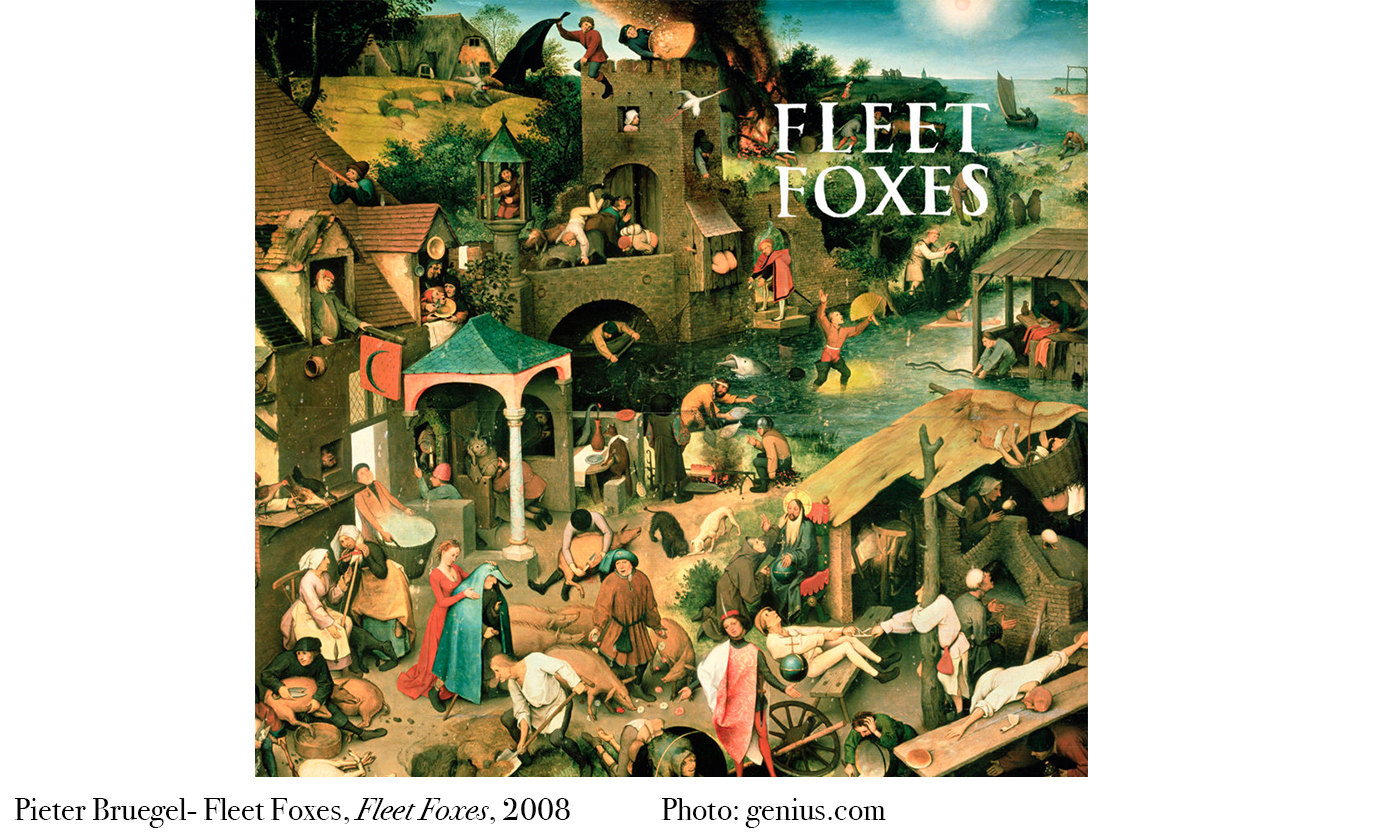 The Seattle-based band achieved immediate fame with their debut album, the cover of which won the Vinyl Art Award the same year as its release. The image is an oil painting on oak panel from 1559 by Pieter Bruegel, which captures the customs expressions of a village: a series of proverbs that allude to human weaknesses. The album received the highest scores in specialized media such as Pitchfork, The Guardian or Rolling Stone. The group formed by Romy Madley Croft, Oliver Sim and Jamie XX reached the list of the “100 best records of 2008” published by The Times. 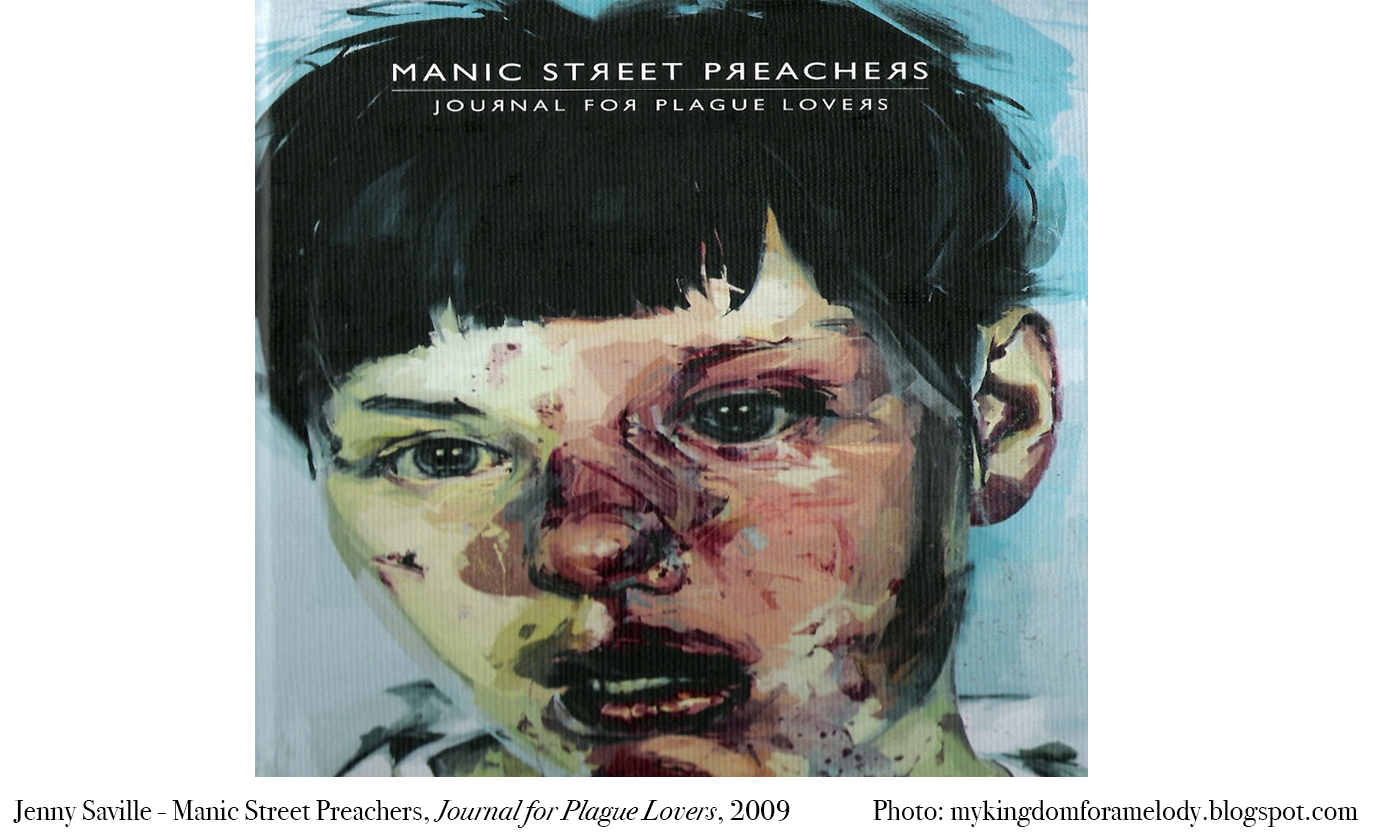 The Welsh band and the English artist collaborated twice. For the album Holy Bible Saville used the painting Strategy (1994), where three semi-naked women with bulky bodies are seen. For Journal for Plague Lovers, the artist used Stare (2005), the face of a blurred woman whose face projects sadness and wonder. The cover was not very well received by some distributors. However, in the 2009 Best Art Vinyl poll it won a stunning second place. Unknowingly, the artist illustrated a record that would reach international cult for containing the last letters of Richey Edwards, who mysteriously disappeared in 1995, and in 2008 was declared by the British police to be presumed dead. 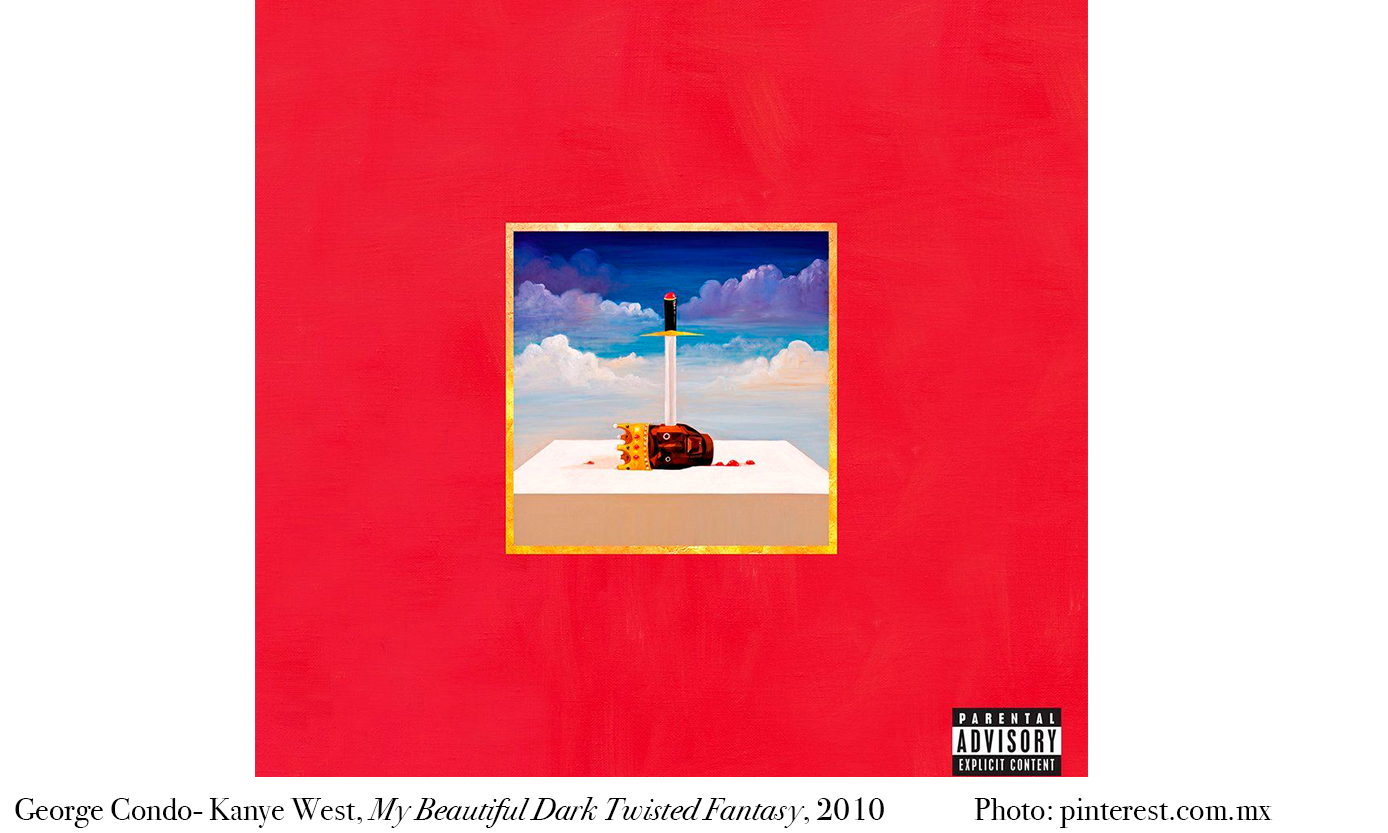 George Condo made not only one, but 5 covers for the American rapper’s fifth album. For the creation of these images, the musician visited the painter’s studio to listen together to the songs on the album. Subsequently, the painter produced around 9 paintings, of which five were the finalists. In the artist’s words, one of the images, called Naked Sphinx Straddling Kanye, “is a kind of fragment, between a sphinx, a phoenix, a disturbing ghost, a harpy. Kanye is also in some kind of weird burned-out room in the 1970s Chicago blues club having a beer, so far from the real Kanye West that it’s just a scream.” This cover was censored in several stores in the United States, which pleased the musician. 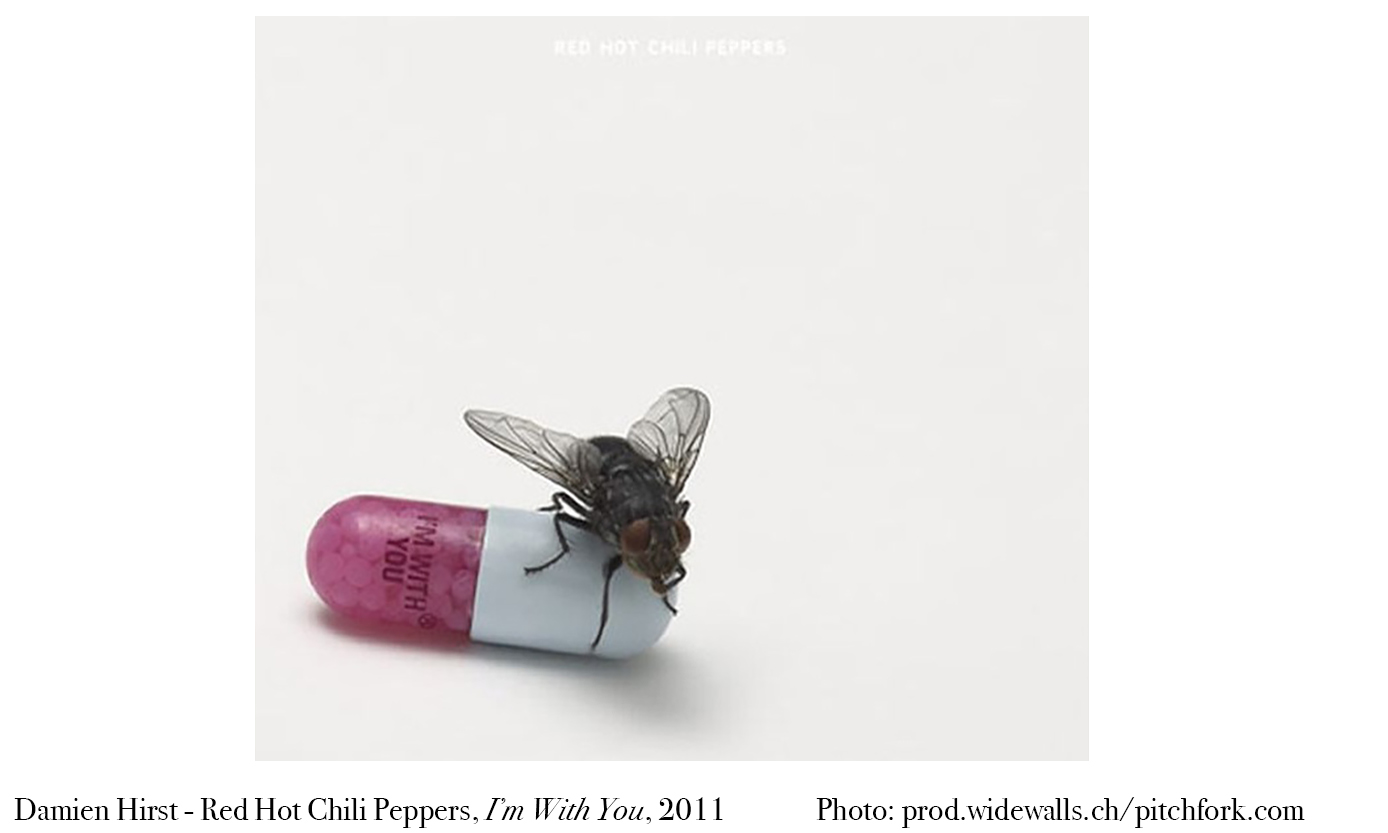 I’m With You shows a fly on a pink to white capsule, which could be interpreted as a reflection on birth and death seen through the lens of medicine and pharmacies. Nothing new under the sun for the English artist Damien Hirst, who has made these concepts his personal stamp. The band’s vocalist Anthony Kiedis perhaps made the most pertinent statement to describe the cover: “It is an image. It is art. Iconic. We did not give it its meaning, but it is clearly open to interpretation.” 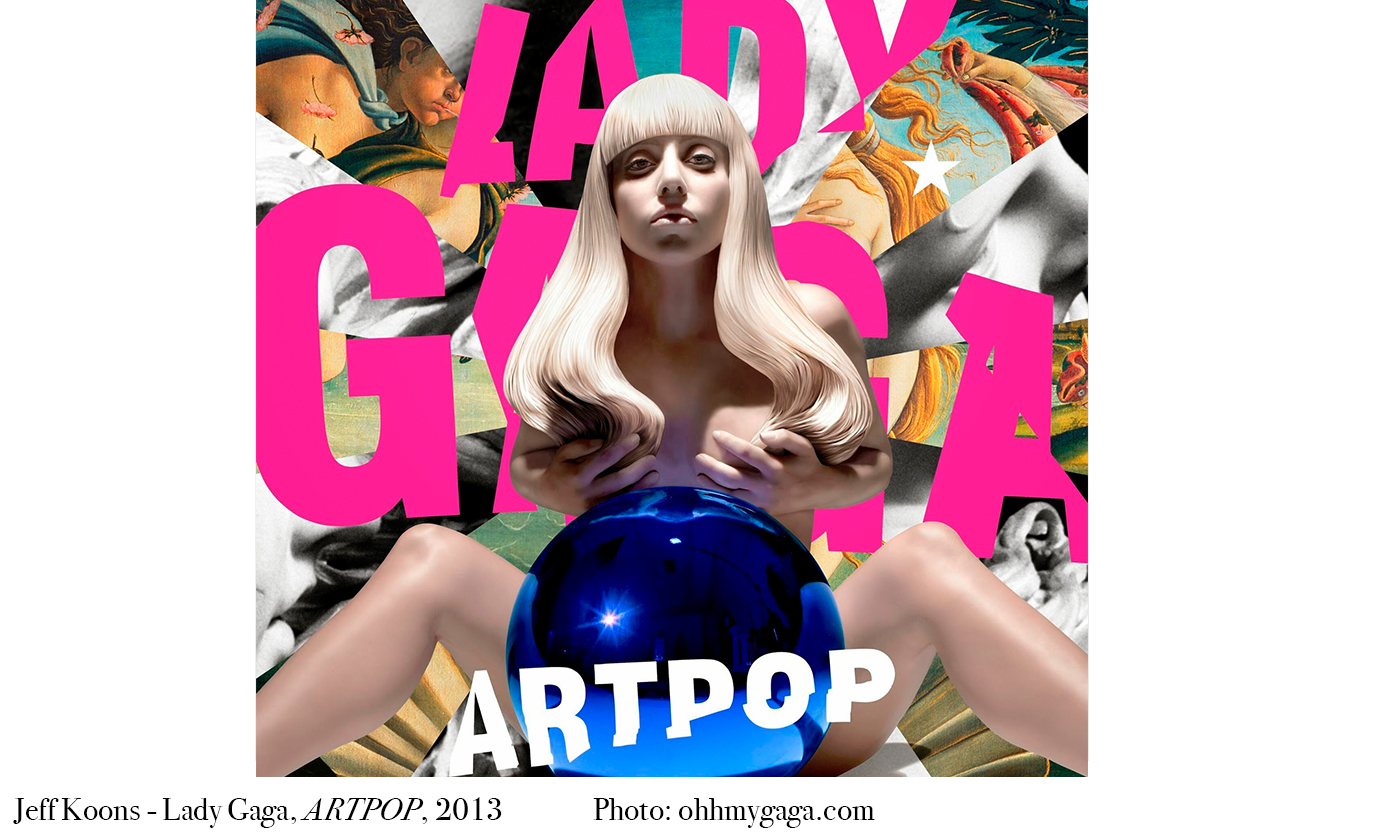 If Damien Hirst appears on our list, we could not forget the other side of the same coin: one seems the complement of the other. Jeff Koons collaborated with Lady Gaga taking advantage of his best arguments: strident colors, bizarre shapes, allusions to pop culture and the power of the narcissistic image crossed by sexuality and references to classical art: Gaga has a perfect hairstyle. Sitting in a blue sphere, she covers her breasts with her hands while in the background it is seen -deconstructed- The Birth of Venus by Botticelli and Apollo and Daphne by Gian Lorenzo Bernini. The same artist said on the cover: “I wanted to have Gaga there as a sculpture, as a type of three-dimensional shape with the ball that looks. The ball that looks becomes the symbol of everything. When you come across something like that, you affirm. Affirm your existence. And after that affirmation, you begin to want more. There is a transcendence that takes place and finally takes you to everything.” As it could not be otherwise, for the release of the album a sculpture created by Koons replicating the cover was revealed. Round business. 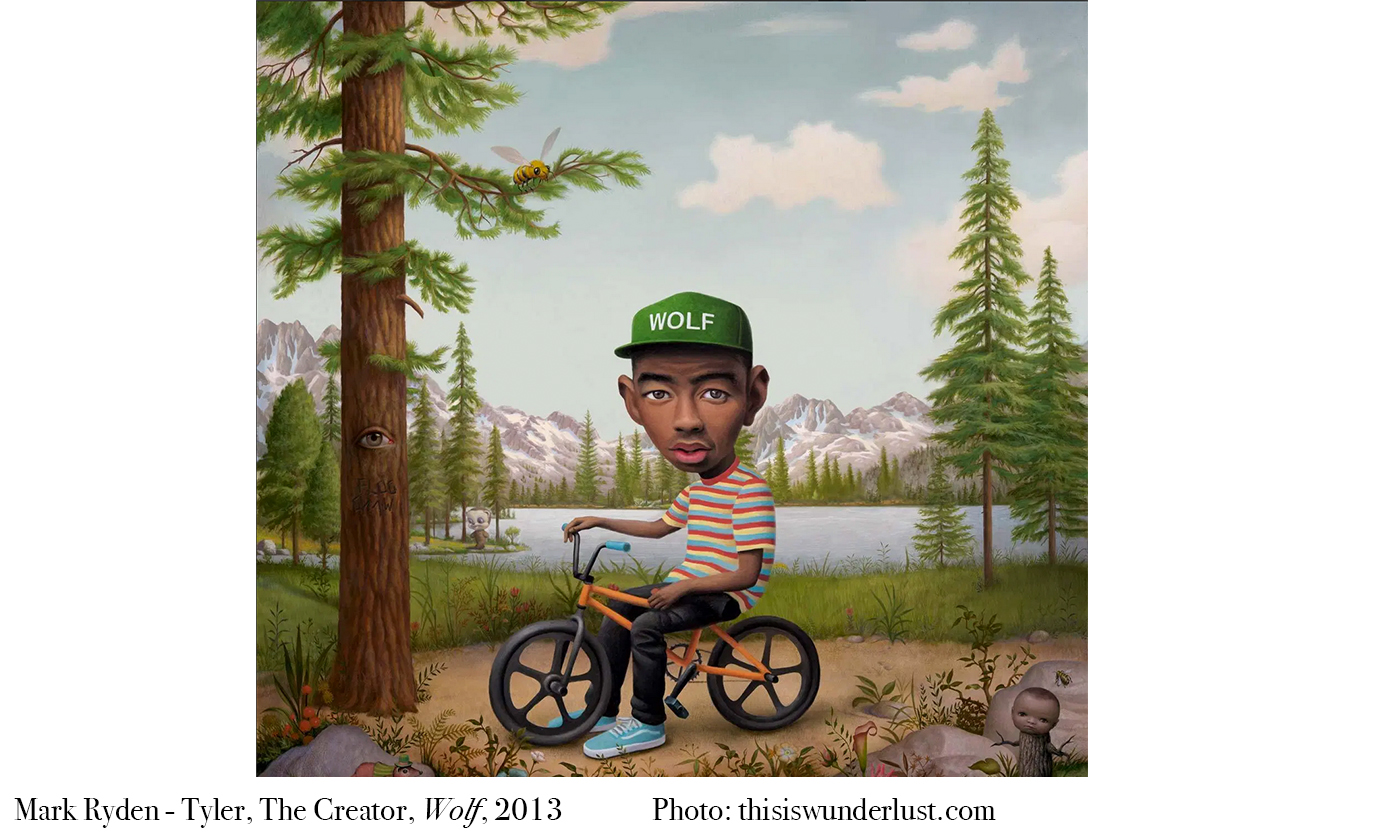 For many years the American artist dedicated himself to making covers for the most recognized musicians in their genre: Dangerous, by Michael Jackson; One Hot Minute, by Red Hot Chilli Peppers or Love in an Elevator, by Aerosmith. Wolf has three different covers. The one Ryden made was revealed only in the special deluxe edition: the singer’s figure poses on an orange bicycle in the middle of a wooded area with strange details around: a tree with an eye, a small tree with a baby’s head, various animals. This is one of Tyler, The Creator’s most recognizable covers. 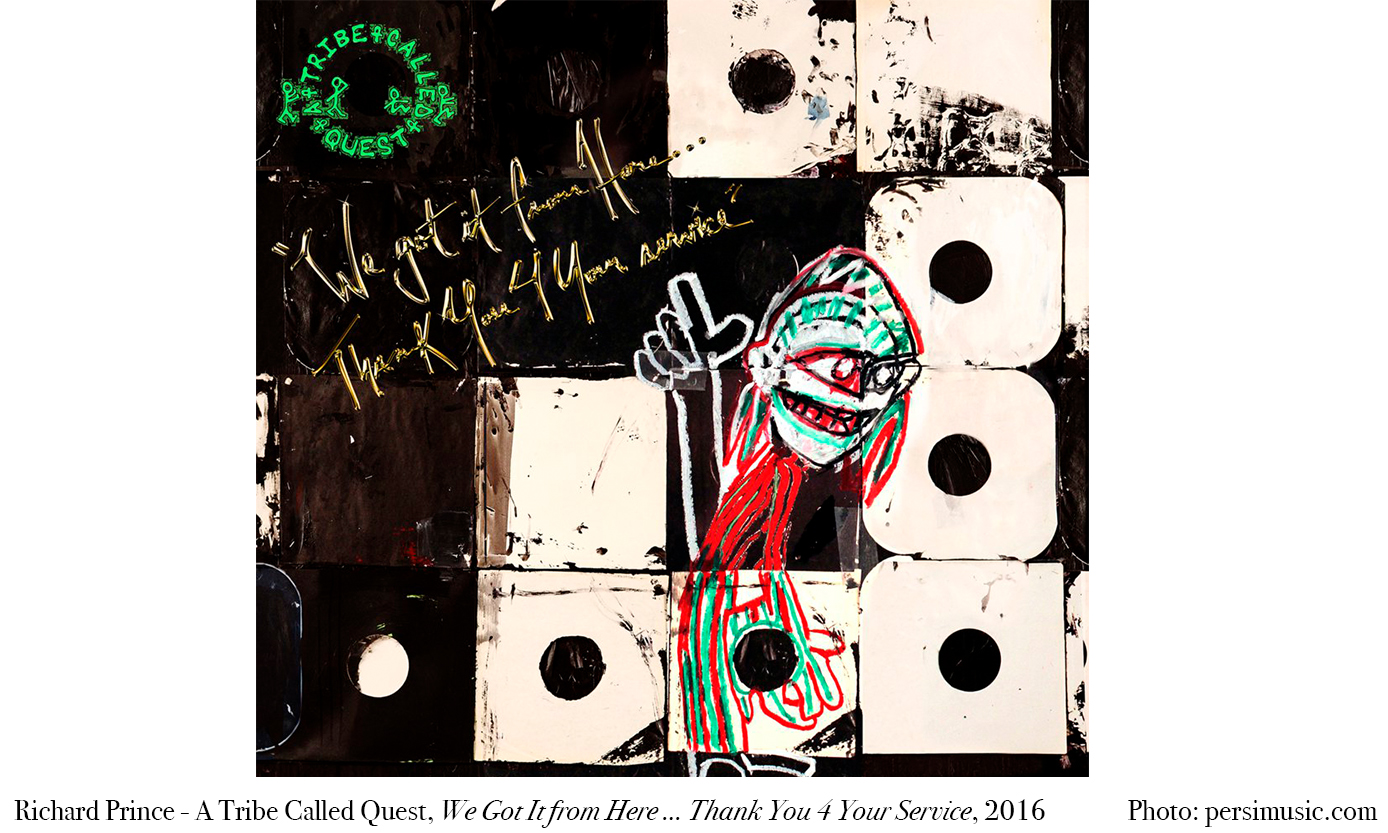 The sixth and last album of the American hip-hop group is an ambitious work with special performances by musicians such as Elton John, Kendrick Lamar, Jack White or Kanye West. Prince show a work whose main figure could have been come up from a child’s sketchbook. With the notable difference that this figure coexists with other silhouettes that give it a striking contrast. Last year, Q-Tip, a member of the band, showed – without purposes of sale – diverse works of art of his property in the auction house Bonhams, among which was the original image of Prince that gave life to the cover of the disk.

*Lucía Peñalosa studied Art and Cultural Heritage at the Autonomous University of Mexico City. In recent years, her work has focused on the coordination and management of museum projects, and more recently, on curatorial processes. Her area of ​​interest focuses on critical museology, as well as the gender perspective, feminism and music.