From time when humans first drew an image on the wall of a prehistoric cave (the oldest known figurate drawing is that of a bibirusa pig deer from Indonesia), recreating images seen in real life has been a form of artistic expression.  In an effort to describe the world around him, man (and woman) has put pencil, chalk, and paint to a surface to draw figures; animals, humans, things of nature and manmade objects.  However, this type of artistic expression was no more than what was expected: recreating reality. Giving this type of art an actual name is a more recent event.

Why Figurative Art and its Beginnings

The basis of figurative art is realistic, a recreation of a person or thing by an artist expressing their view (and doesn’t have to be EXACTLY realistic). A “figure” can generally realistic, but at the least, must be recognizable as such.

Athenian Greece. Protagoras coined the phrase “Man is the measure of all things” and was one of the leading thinkers of the time, a group called the Sophists, whose ranks included Cicero, Socrates, Plato, and Aristotle. Although they were more focused on the individual’s place in society, protecting the rights and freedoms of the individual, they are considered the “Future of Figurative Art” when artists in the 1400’s and 1500’s were inspired by Sophist Greece, their culture and social philosophies.

But when one ponders the birth of figurative art as a style and not by its name, it seems to be the most basic form of artistic expression, the truest way for humans to honor their cultures, their beliefs, and their experiences. Men of more philosophical thinking attempted to explain why memorializing and remembering details of a civilization, a political or religious event, or the existence of a person or group of people is paramount to the evolution of the human experience. But it is truly human nature. 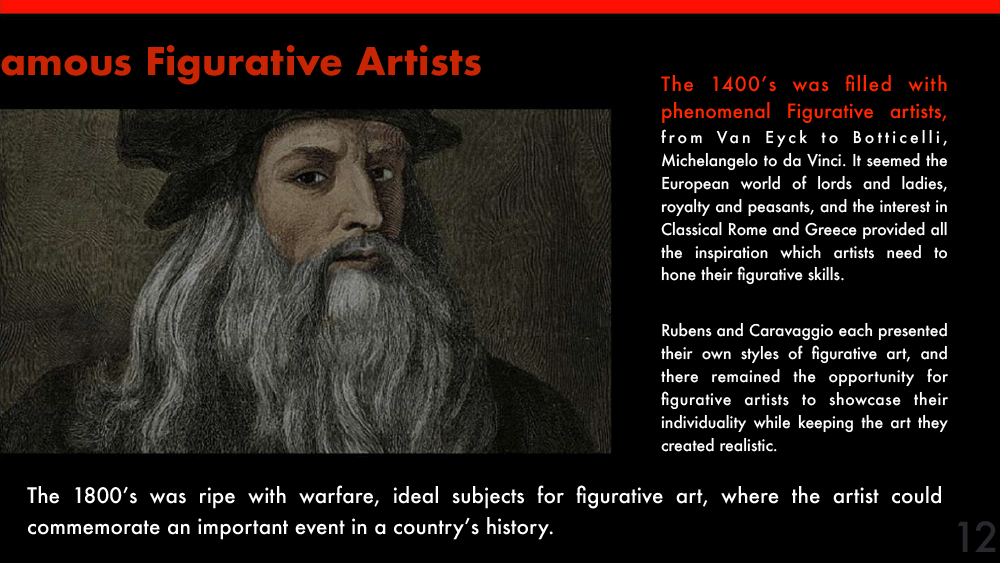 The 1400’s was filled with phenomenal Figurative artists, from Van Eyck to Botticelli, Michelangelo to da Vinci. It seemed the European world of lords and ladies, royalty and peasants, and the interest in Classical Rome and Greece provided all the inspiration which artists need to hone their figurative skills.

Rubens and Caravaggio each presented their own styles of figurative art, and there remained the opportunity for figurative artists to showcase their individuality while keeping the art they created realistic. The 1800’s was ripe with warfare, ideal subjects for figurative art, where the artist could commemorate an important event in a country’s history.

Some artists chose to evolve their own styles as the popularity of abstraction grew and they strove to maintain relevance in the fickle world of art.  De Kooning wavered between Figurative and Abstract Expressionism. As abstract art grew in popularity and became the “norm” and most sought-after type of art, de Kooning returned to Figurative art again, but by now this was met with criticism as Abstract Expressionism had solidified its position as leader in the art world.

One cannot say there was a date, a time, or an end to figurative art as a form of expression. However, there was a slow movement towards abstraction when artists started to create “less” realistic representation of figures, experiencing the desire to rebel against more traditional art works. Cubism may be one of the most obvious paths which artists began to follow in a more avant-garde method of expressing creativity in art. Some even say that Impressionism also led to the downfall of figurative art, as painters began to focus more on the method and overall “impression” created by the works and not the actual subjects themselves. 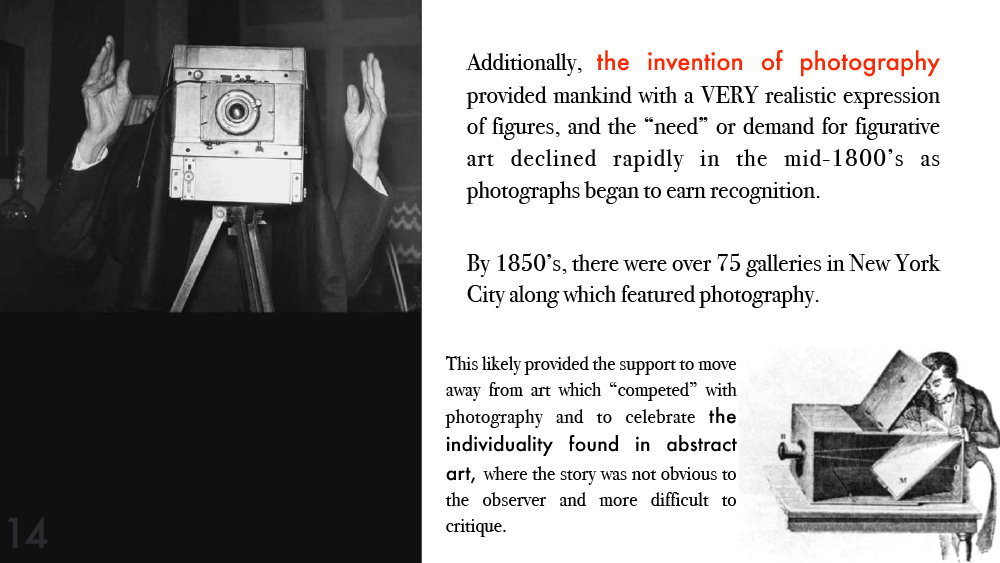 Additionally, the invention of photography provided mankind with a VERY realistic expression of figures, and the “need” or demand for figurative art declined rapidly in the mid-1800’s as photographs began to earn recognition.  By 1850’s, there were over 75 galleries in New York City along which featured photography. This likely provided the support to move away from art which “competed” with photography and to celebrate the individuality found in abstract art, where the story was not obvious to the observer and more difficult to critique. 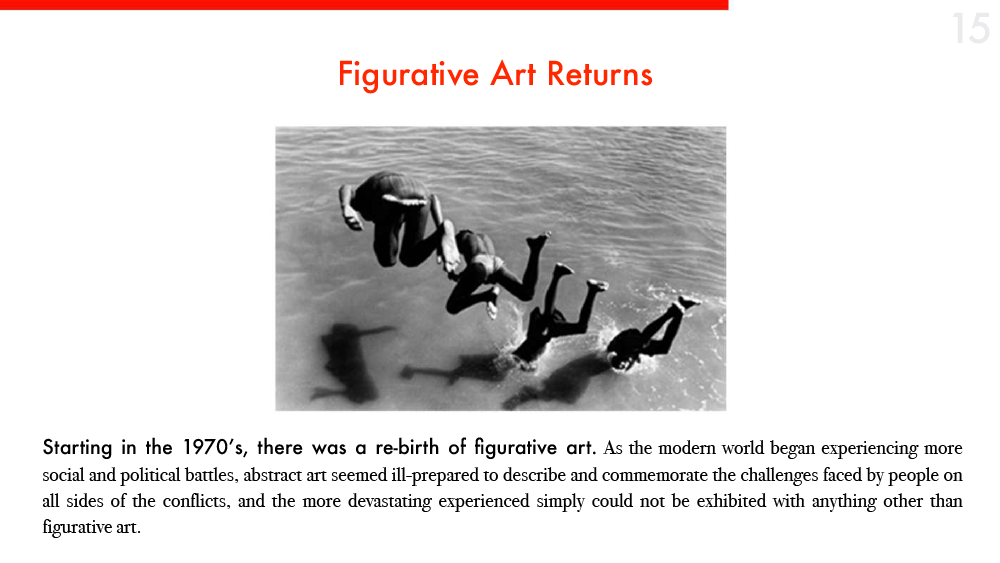 Starting in the 1970’s, there was a re-birth of figurative art. As the modern world began experiencing more social and political battles, abstract art seemed ill-prepared to describe and commemorate the challenges faced by people on all sides of the conflicts, and the more devastating experienced simply could not be exhibited with anything other than figurative art.

In recent years, the growth of caricatures, digital art of all kinds, cartoons and portraits has supported he resurgence of figurative art. We see a more worldwide acceptance of all types of art; figurative is particularly popular as art enthusiasts of all types can view art and recollect (or discover) the story behind the work. 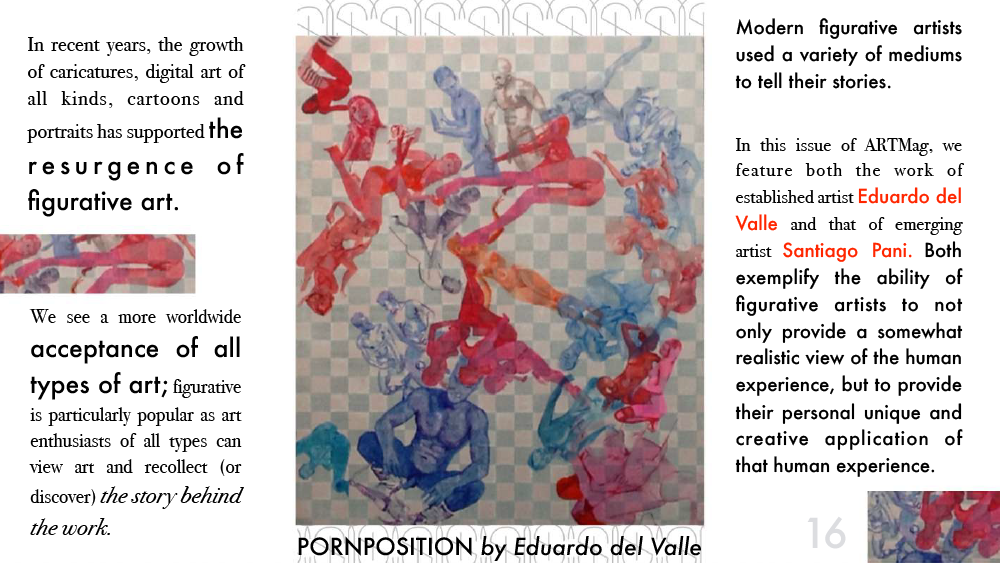 Modern figurative artists used a variety of mediums to tell their stories. In this issue of ARTMag, we feature both the work of established artist Eduardo del Valle and that of emerging artist Santiago Pani. Both exemplify the ability of figurative artists to not only provide a somewhat realistic view of the human experience, but to provide their personal unique and creative application of that human experience.