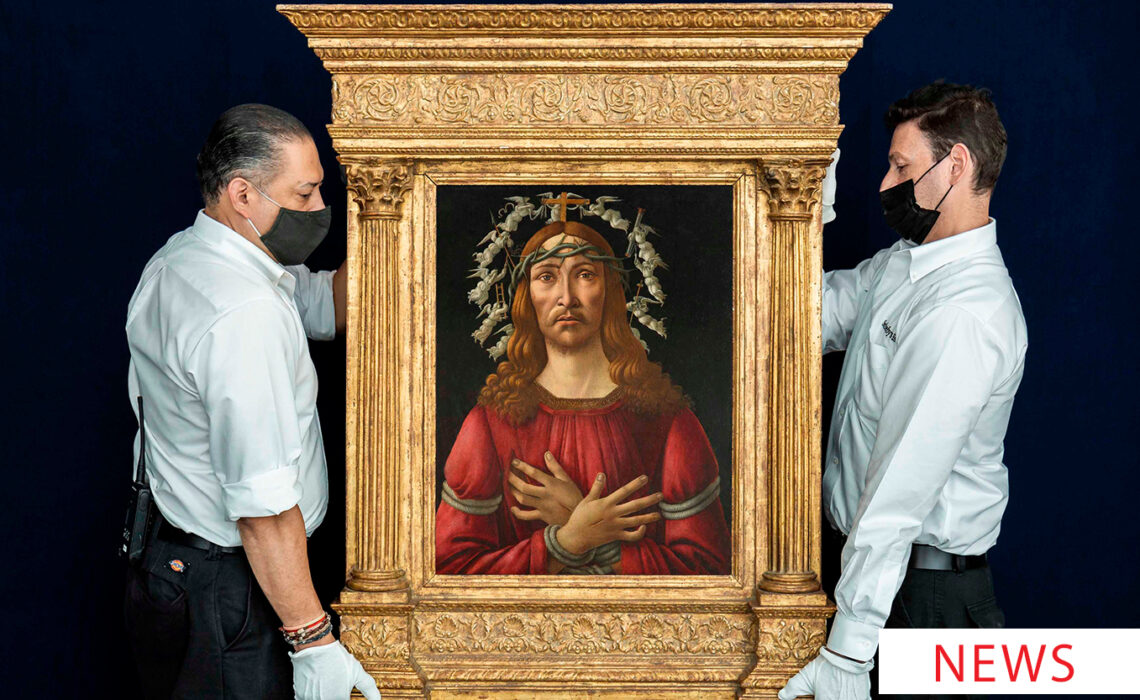 Sotheby’s sold Man of Sorrows by Botticelli for $45.4 m, a new record for a piece that has been highly questioned for his originality.

Last week,  Sotheby’s sold for the highest price expected a painting by Botticelli that has been questioned by experts who are in doubt for the originallity of the piece. In its official web page, the auction house offers a profund analysis of the piece to prove the original autorship by Botticelli. However, The Art Newspaper published the contrasting opinions of two experts of the Florentin painter.

“In Botticelli’s Man of Sorrows, the viewer encounters Christ wearing a pleated crimson robe in a strictly frontal pose, set against a somber, dark background. His half-length figure, nearly life-size, fills the composition; his long, flowing auburn hair frames his brightly illuminated and sensitively modeled face. Delicate drops of blood from the sharp tendrils of his crown of thorns trickle into the softly reddened areas around his slate gray eyes, his gaze at once both sorrowful and serene. A closely trimmed beard sets off his high cheekbones, strong jaw-line, and thin upper lip, ever so slightly raised, as if parted to speak. With tightly bound arms and wrists, he crosses his hands in front of his chest, displaying to the viewer the wounds of the Crucifixion on his hands and at his side. Though nearly imperceptible, the delicate asymmetries in the picture further imbue it with a palpable sense of immediacy and remarkable psychological depth, particularly in the faint irregularity of the position of Christ’s eyes. and even more so in the gentle lean of his head to the left, a slightly straining muscle in his neck suggesting he has perhaps only just shifted position.” 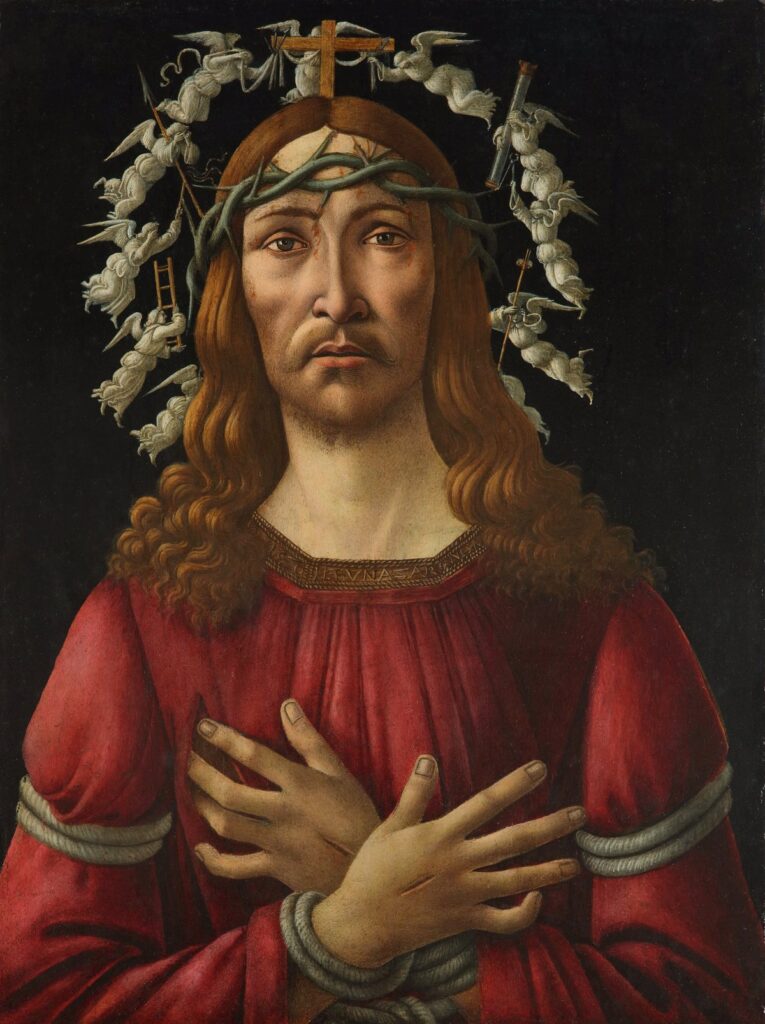 They actually made an iconographic comparison between different works by the painter, focusing on technical details regarding the traces of the hands and the face of other of his human figures:

“As pointed out by Kanter, there are long-standing misconceptions surrounding Botticelli’s late career as first perpetuated by Vasari, and the artist’s late paintings still provoke some debate today. Botticelli’s work around the turn of the century became increasingly spiritual, and his Mystic Nativity of 1500 in the National Gallery, London —the only signed and dated painting by the artist—is a case in point. Herbert Horne, the early twentieth-century cataloguer of Botticelli’s work, accepted as autograph only five paintings from the artist’s last decade. In his 1978 publication, Lightbown listed this Man of Sorrows under “workshop and school pictures” as one of the versions of this subject to have been attributed to Botticelli or his workshop. Unillustrated, he describes it as the Redeemer, following his discussion of a group of three paintings of the Resurrected Christ: a version at the Detroit Institute of Arts attributed to Sandro Botticelli by some scholars but deemed to be a workshop product by others; and two variants at the Accademia Carrara, Bergamo  and the Fogg Museum, Cambridge.” On this matter,  The Art Newspaper consulted the art historian Frank Zöllner, author catalogue raisonné of Botticelli’s works, who said in the article “Botticelli: my worries about the Man of Sorrows: “To make the attribution of the Man of Sorrows more credible, reference has been made to the peculiarities of Botticelli’s late style. But can this explain such clumsily designed hands and rather inelegant angels? Be that as it may, attributions are not decided in a day, and controversies over the authentication of Old Master paintings are not uncommon.” On the other hand, Bastian Eclercy,  specialist in Italian Renaissance and Baroque painting, in his text “Botticelli’s ‘stunning and puzzling’ Man of Sorrows“, also published by The Art Newspaper, “In this painting, Botticelli combined several thematically interrelated pictorial types whose iconographic traditions occasionally overlap: a feature of the Man of Sorrows is the display of the scars; The Ecce Homo is alluded to by the crown of thorns, the purple robe, and Christ’s bonds; finally, it was the Vera Icon from which Botticelli adopted the strict frontality of the upright head.”

Another controversy around the painting is the fact that a hidden composition was revealed before the auction. An image of Virgin Mary. In an interview with the specialized publication The Art Newspaper, Chris Apostle, director of the Old Masters department at Sotheby’s, revealed that he believes the image is an abandoned composition of a “Madonna of tenderness”, a type of representation derived from Greek culture in which Mary cradles the little Jesus with her face pressed to his. Tracing of the underdrawing in the present lot, with the painting rotated 180 degrees . Image via: Sotheby’s