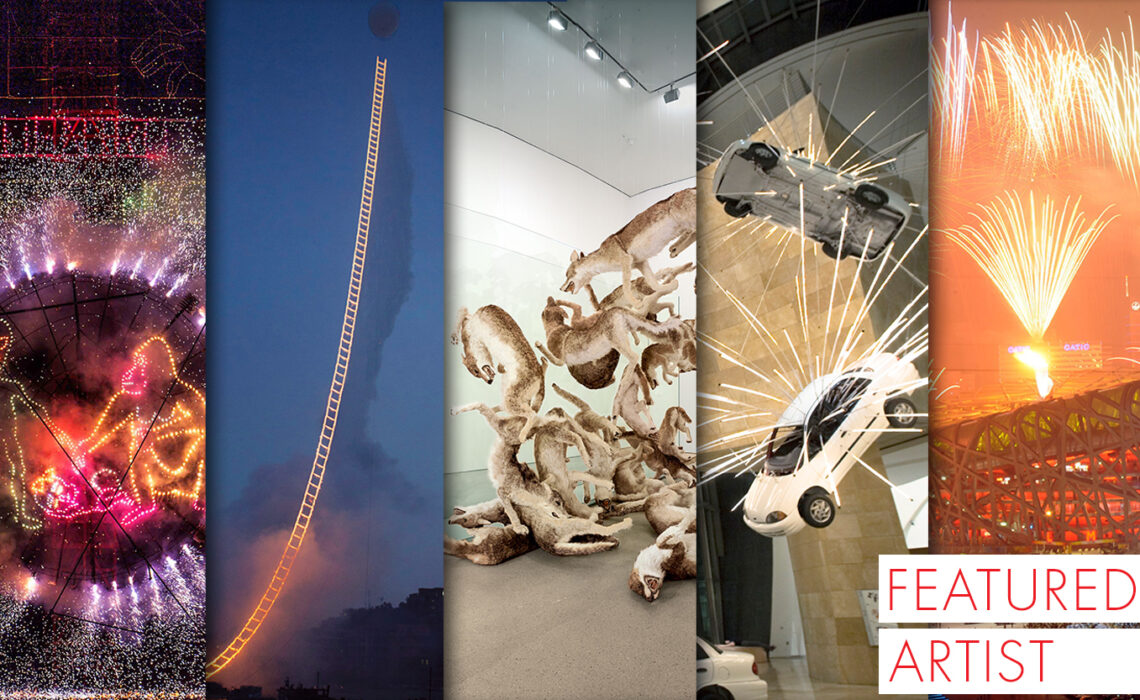 Based in New York, the Chinese artist merges video with draw, sculpture, art-installation and fireworks. Yes, fireworks! For some art critics, Cai Guo-Qiang is not only one of China’s most prominent contemporary artists, but one of the leaders of art today for using materials in unexpected ways. His fireworks installations use gunpowder to create amazing visual effects without harming nature. Here we select 5 of his most important pieces of art. 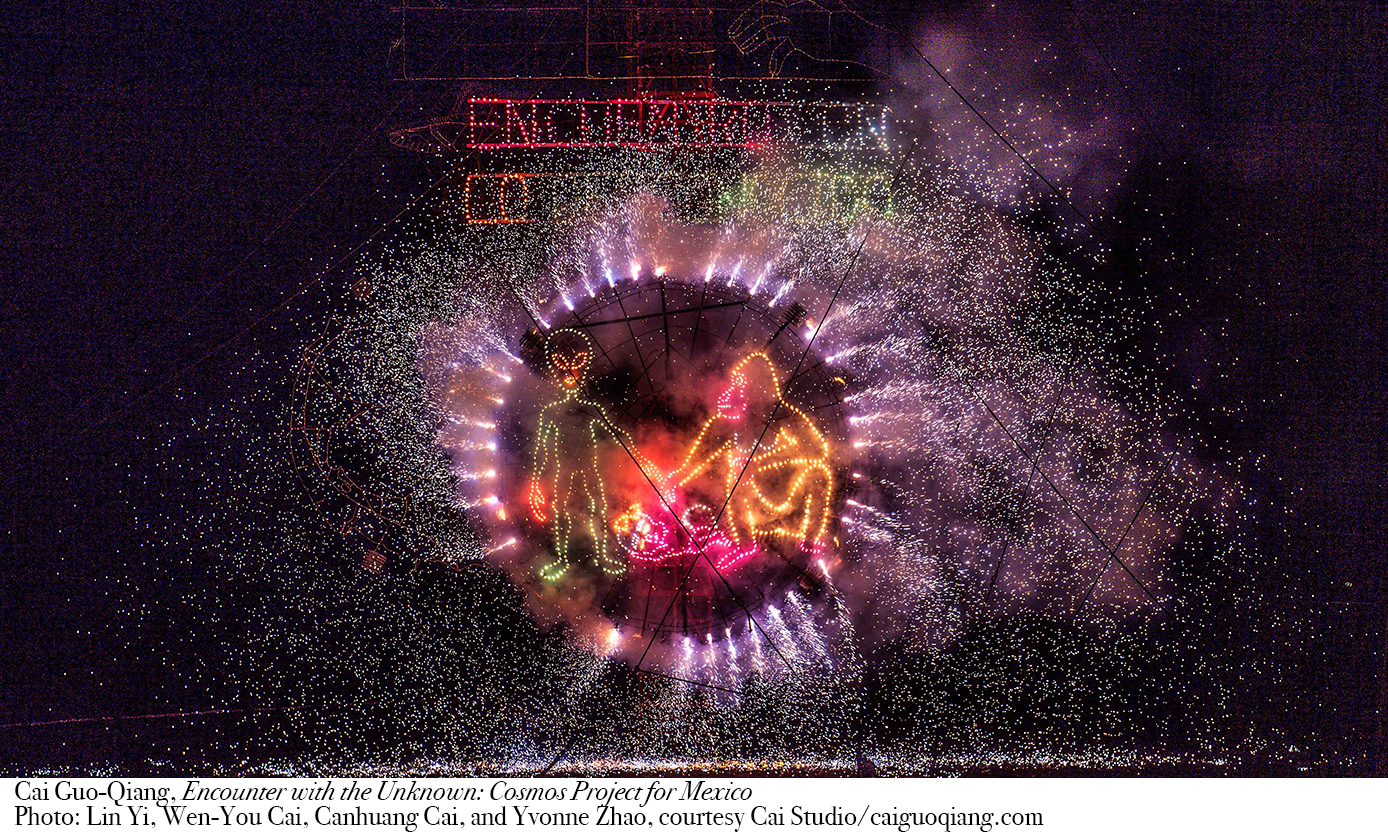 Encounter with the Unknown: Cosmos Project for Mexico (2019)

Between 2010 and 2011 Cai Guo-Qiang carried out his first project in Latin America called Esplendor y Soledad. However, last year he made an intervention in Cholula, Puebla, using some of the concepts that have guided her artistic career: spirituality and the relationship between science and tradition. The project includes a series of fireworks castles making figures linked to our culture: mystical trees, cosmic pyramids, modern castles. Cai Guo Qiang shows great respect for ancient cultures while proposing new ways of relating art to everyday life. 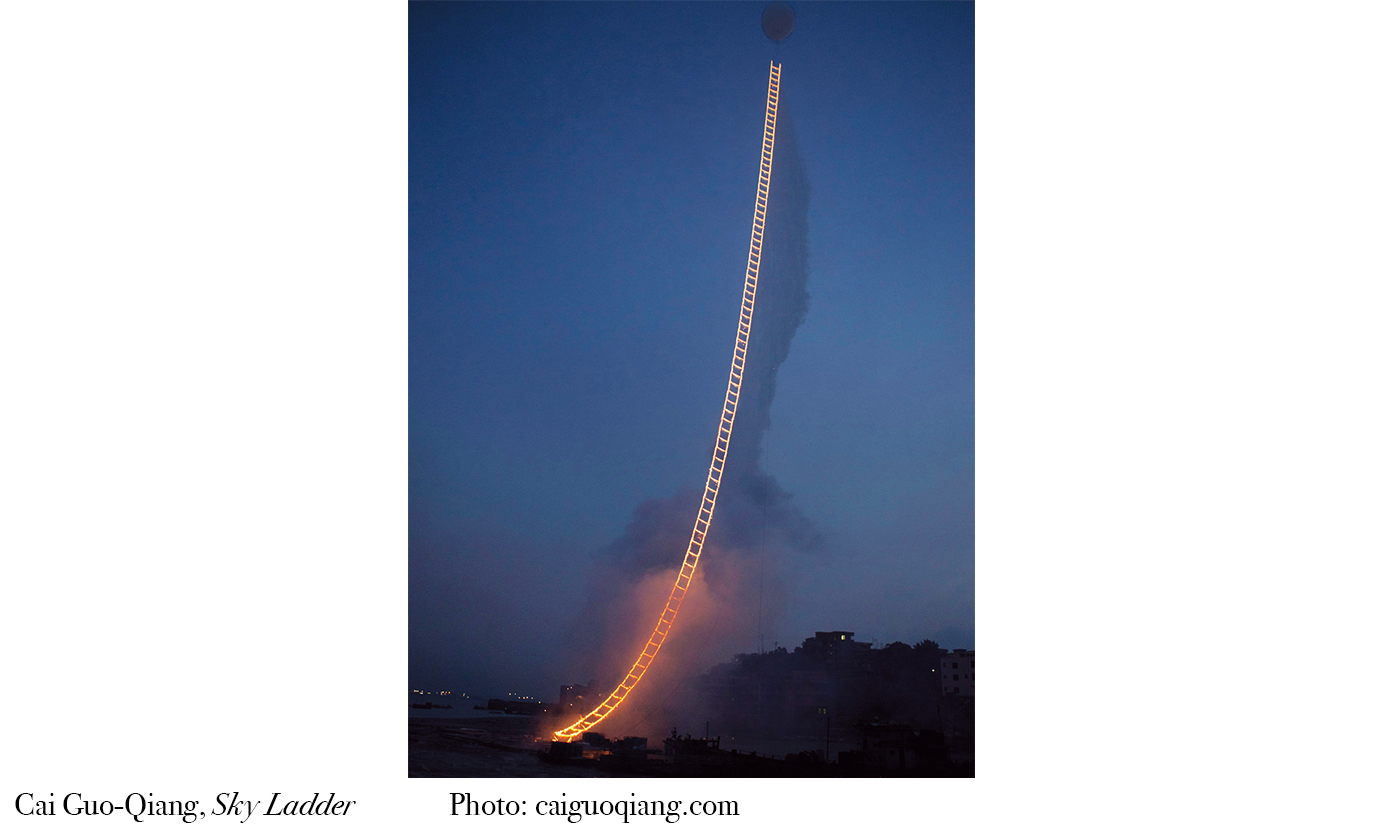 Projected in 2015, this work was imagined for the artist for more than 15 years. Its image is not only extremely attractive, but revolves around powerful ideas related to religion, science and the complexity of people’s feelings. “Sky Ladder is a 1,650-foot-tall ladder, held aloft by a giant balloon and rigged with explosives. As the massive sculpture ignites, it creates a fiery vision that miraculously ascends to the heavens,” mentions artnet.com. For his part, Cai Guo-Qiang says, “I was touched and happy to see so many people could relate to it. It kind of proved the power of artworks.” If you want to know more about this piece of art you could watch Sky Ladder, the documentary by Netflix. 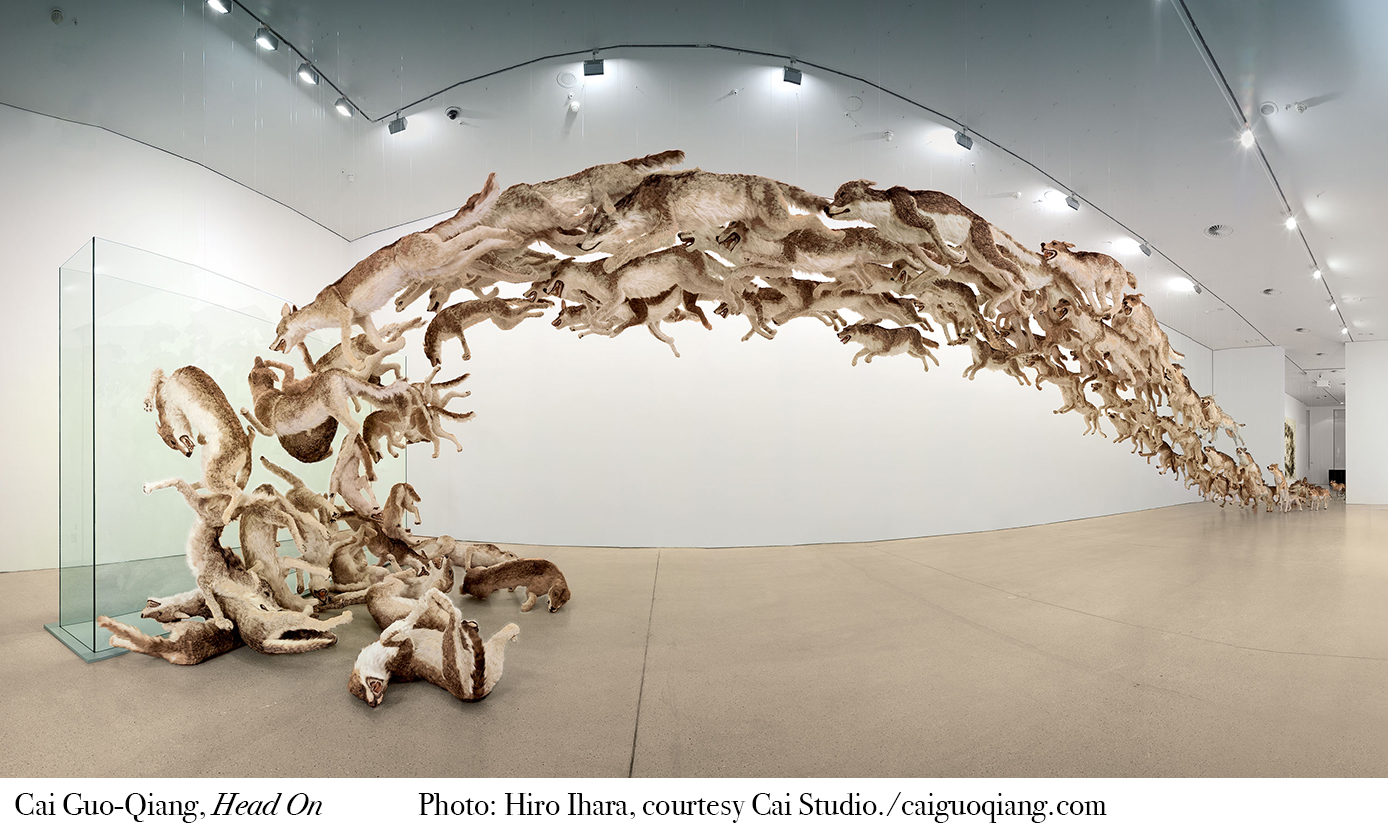 This installation is visually very attractive. A series of wolves jump acrobatically. However, they all collide with an invisible wall. Some art critics have seen in this image a reflection on art and nature. However, the Chinese artist himself has stated that the installation is also about the Berlin Wall. And beyond that, with the political borders imposed by the Nation-States. A reminder of the political power that art has. 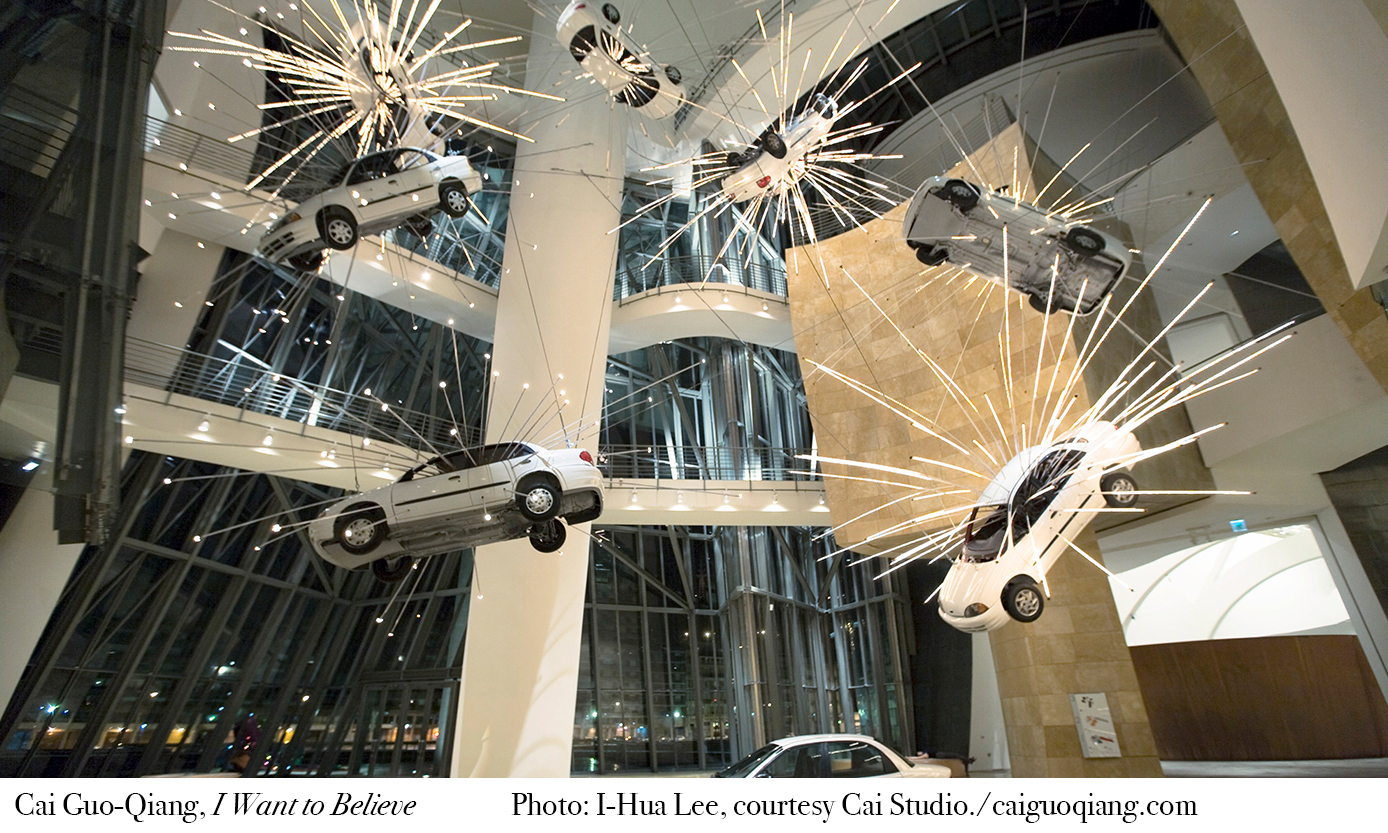 Just over 10 years ago, the Guggenheim Museum in Bilbao dedicated a retrospective to Cai Guo-Qiang. The Chinese artist made an amazing installation of cars that hung in the museum’s sky. The suspended cars were accompanied by light cables. The exhibition was one of the first major retrospectives dedicated to the Chinese artist. A consecration space for one of the most inspiring artists of recent years. 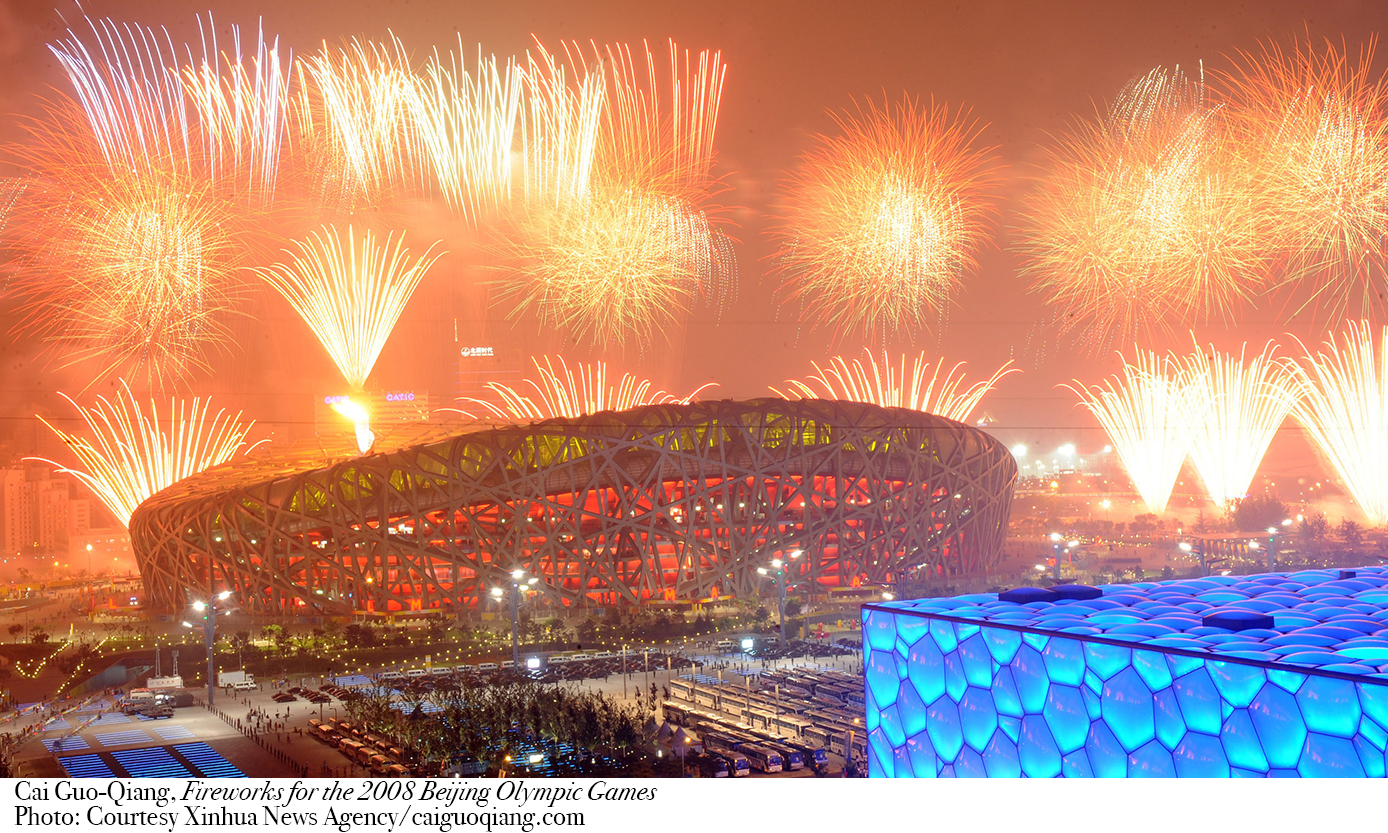 In 2008, Cai Guo-Qiang conducted the opening ceremony with a fireworks display that was not without controversy. The show was seen by about 34 million people. The fireworks were made with gunpowder that does not harm the environment. “The explosion event Footprints of History: Fireworks Project for the Opening Ceremony of the 2008 Beijing Olympic Games consisted of a series of 29 giant footprint fireworks — one for each Olympiad — over the Beijing skyline, leading to the National Olympic Stadium. The 29 footprints were fired in succession, traveling a total distance of 15 kilometers, or 9.3 miles, within a period of 63 seconds,” describes Trong Gia Nguyen by Magazine.Art21, “from my own perspective as an artist, there are two separate realms in which this artwork exists, as two very different mediums have been utilized. First, there is the artwork that exists in the material realm: the ephemeral sculpture. This was viewed by people attending the ceremonies inside the stadium and standing outside on the streets of Beijing. This artwork was documented from various vantage points on video, which has been broadcast by many international media outlets.”