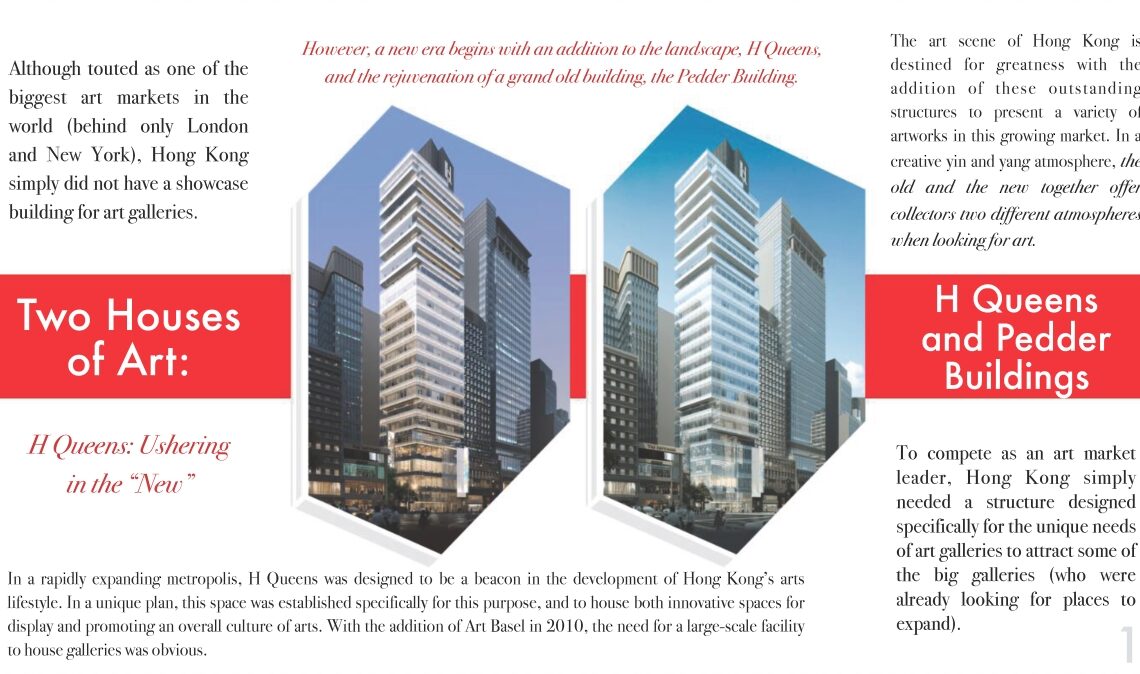 Although touted as one of the biggest art markets in the world (behind only London and New York), Hong Kong simply did not have a showcase building for art galleries. However, a new era begins with an addition to the landscape, H Queens, and the rejuvenation of a grand old building, the Pedder Building. The art scene of Hong Kong is destined for greatness with the addition of these outstanding structures to present a variety of artworks in this growing market. In a creative yin and yang atmosphere, the old and the new together offer collectors two different atmospheres when looking for art.

H Queens: Ushering in the “New”

In a rapidly expanding metropolis, H Queens was designed to be a beacon in the development of Hong Kong’s arts lifestyle. In a unique plan, this space was established specifically for this purpose, and to house both innovative spaces for display and promoting an overall culture of arts. With the addition of Art Basel in 2010, the need for a large-scale facility to house galleries was obvious. To compete as an art market leader, Hong Kong simply needed a structure designed specifically for the unique needs of art galleries to attract some of the big galleries (who were already looking for places to expand). 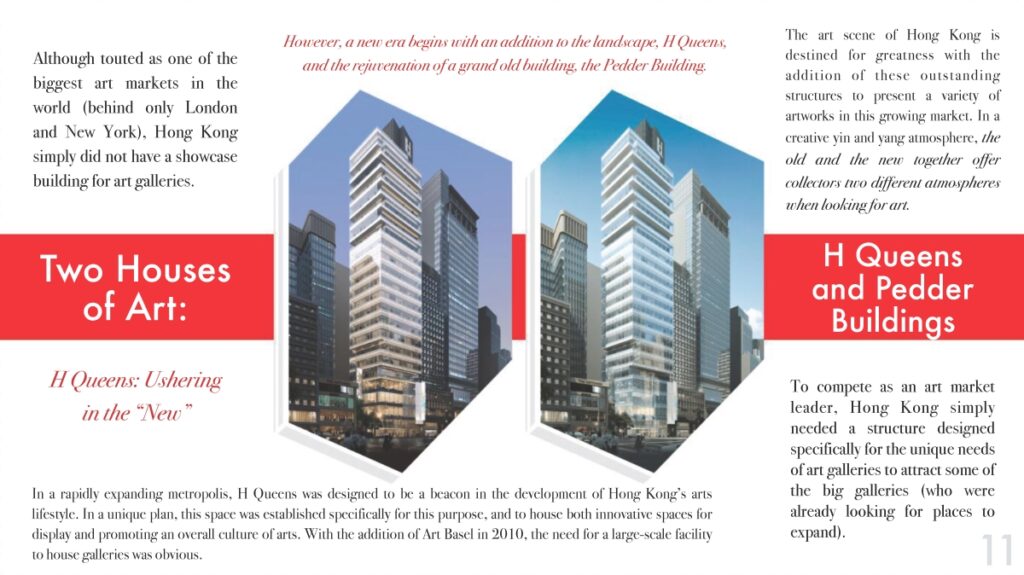 First planned as a commercial structure, architect William Lim worked with developers to create this high-tech giant specifically for housing modern and contemporary art. The impressive design has won a variety of awards:

Galleries were anxiously awaiting the opening of this gem. With few options other than the historic Pedder Building, H Queens represented the future of art exhibitions, with expansive ceilings and open spaces to house unique (and large) works of art. Tang Contemporary was the first to move in before permits had even been filed to move oversized pieces in place, and the gallery was willing to disassemble and weld back together a few metal pieces just to be number one. David Zwirner, the anchor gallerist first to commit to tenancy, has two entire floors to house his world-renowned progressive art collection.

Renovating the “Old” – The Pedder Building

On the other end of the spectrum stands the Pedder Building. Built in 1924 as a commercial structure, the Pedder Building has been home to retail shops for nearly its entire history, until its rebirth into the art gallery world after the first Art Basel Hong Kong event in 2008. The feverish approach to development by the people of Hong Kong could have meant the end to old buildings like this one, but the beauty and elegance of Pedder cannot be denied. 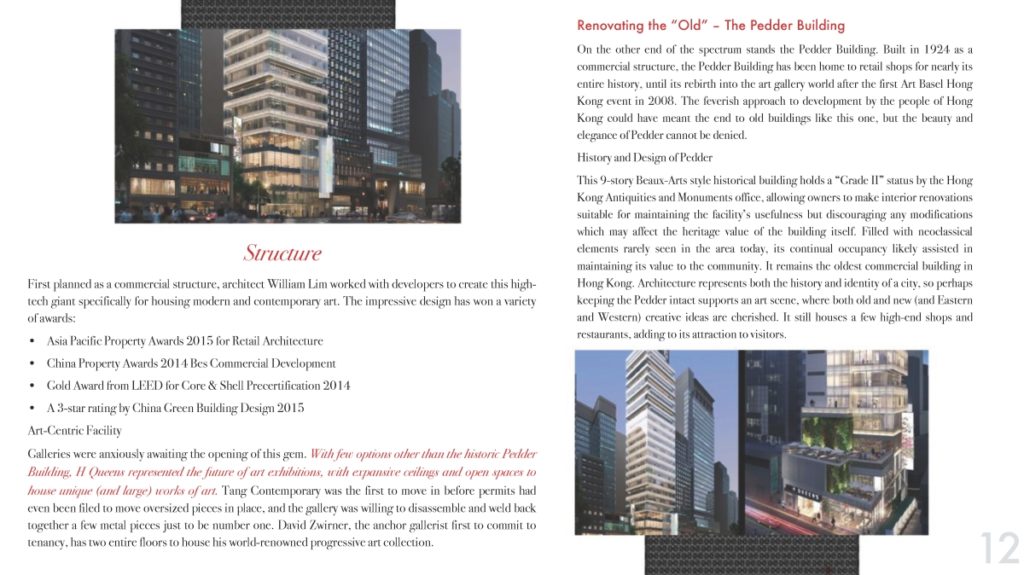 History and Design of Pedder

This 9-story Beaux-Arts style historical building holds a “Grade II” status by the Hong Kong Antiquities and Monuments office, allowing owners to make interior renovations suitable for maintaining the facility’s usefulness but discouraging any modifications which may affect the heritage value of the building itself. Filled with neoclassical elements rarely seen in the area today, its continual occupancy likely assisted in maintaining its value to the community. It remains the oldest commercial building in Hong Kong. Architecture represents both the history and identity of a city, so perhaps keeping the Pedder intact supports an art scene, where both old and new (and Eastern and Western) creative ideas are cherished. It still houses a few high-end shops and restaurants, adding to its attraction to visitors.

Although both impressive structures offer differing positions within and around the city, they each represent a dedicated within the art community to offer distinction, in genres, in architecture, in creativity. Art collectors have two locations where a plethora of works can be found, offering a wide array of artists, styles, and experiences. With the success of Art Basel and development of additional art fairs, these two buildings aid Hong Kong in its destiny to become an even stronger presence in the maturing art market of the East.