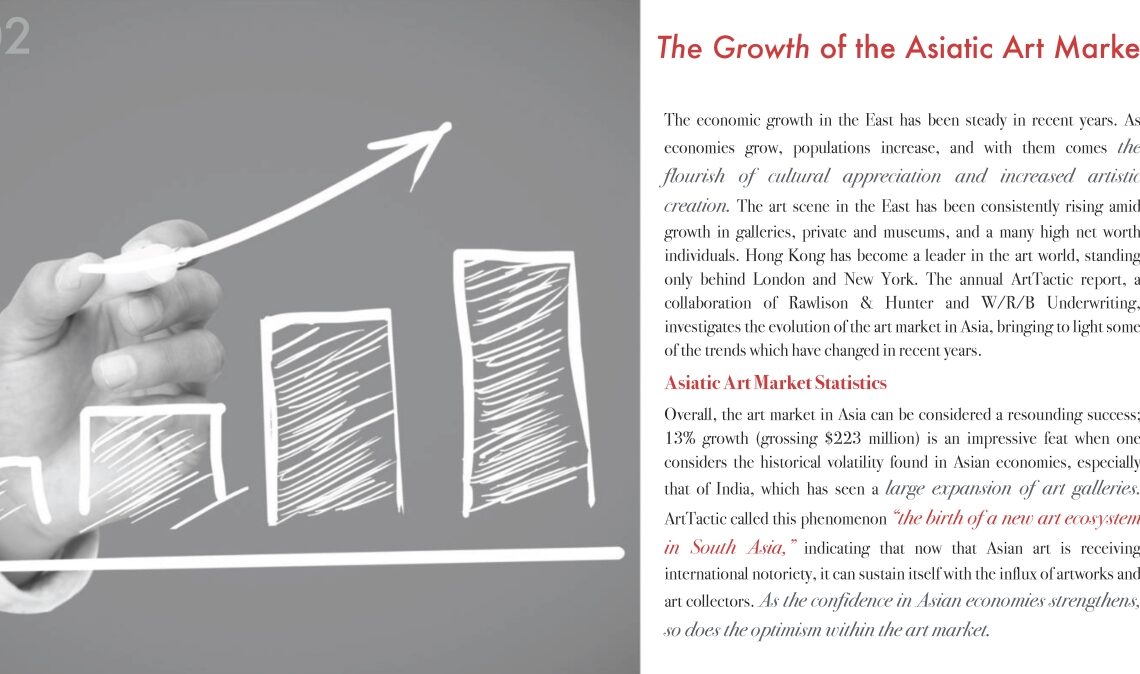 The economic growth in the East has been steady in recent years. As economies grow, populations increase, and with them comes the flourish of cultural appreciation and increased artistic creation. The art scene in the East has been consistently rising amid growth in galleries, private and museums, and a many high net worth individuals. Hong Kong has become a leader in the art world, standing only behind London and New York. The annual ArtTactic report, a collaboration of Rawlison & Hunter and W/R/B Underwriting, investigates the evolution of the art market in Asia, bringing to light some of the trends which have changed in recent years.

Overall, the art market in Asia can be considered a resounding success; 13% growth (grossing $223 million) is an impressive feat when one considers the historical volatility found in Asian economies, especially that of India, which has seen a large expansion of art galleries. ArtTactic called this phenomenon “the birth of a new art ecosystem in South Asia,” indicating that now that Asian art is receiving international notoriety, it can sustain itself with the influx of artworks and art collectors. As the confidence in Asian economies strengthens, so does the optimism within the art market. 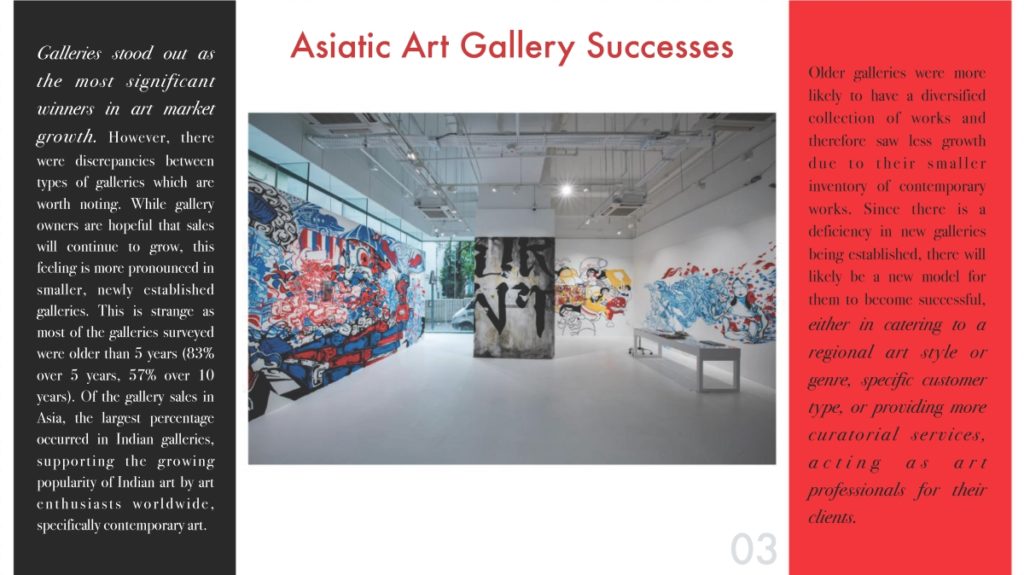 Galleries stood out as the most significant winners in art market growth. However, there were discrepancies between types of galleries which are worth noting. While gallery owners are hopeful that sales will continue to grow, this feeling is more pronounced in smaller, newly established galleries. This is strange as most of the galleries surveyed were older than 5 years (83% over 5 years, 57% over 10 years). Of the gallery sales in Asia, the largest percentage occurred in Indian galleries, supporting the growing popularity of Indian art by art enthusiasts worldwide, specifically contemporary art. Older galleries were more likely to have a diversified collection of works and therefore saw less growth due to their smaller inventory of contemporary works. Since there is a deficiency in new galleries being established, there will likely be a new model for them to become successful, either in catering to a regional art style or genre, specific customer type, or providing more curatorial services, acting as art professionals for their clients.

The Asian art market remains strong, with sales up just over 17% in 2017, and some of the same tendencies found in the West exist here as well. There are those Asian “masters” whose works will consistently bring a high price with aggressive bidding, just like one would find with a Picasso or Koons. As larger numbers of works are introduced to the market, the disparity of prices can be seen. It is interesting to note, however, the growth of non-traditional art collectibles, including antique furniture & textiles. There is a draw from Asian collectors to gather an assembly of both artistic and historical artifacts which suppresses the growth of contemporary works at auctions, and this relatively young market has seen a dramatic increase in new collectors and first-time buyers, who purchase pieces primarily for enjoyment and only secondarily for investment.

Mirroring the art markets of the West, online sales are a rapidly evolving channel for art buyers. The majority of galleries reported that online sales performed the best for discovering new buyers, generating sales through websites, third-party websites, and social media. Online buyers were most often new customers and represented a younger generation of art collectors (33% were, in fact, under 35 years old). Indian galleries catered mostly to citizens, while others in Asia found success with international buyers. The difficulty with customs and international purchasing in India may affect international purchasing, increasing the reliance on local buyers. The successful growth in online sales will allow for more international buyers to purchase Asian art.

Art fairs are successful in their ability to broaden the base of art enthusiasts for galleries, as well as providing a large variety of artworks to collectors, both experienced and new to art collecting. Fairs offer the opportunity for gallerists, collectors, and even artists to share ideas, learn about emerging artists, and get a feel for the market. Of the galleries surveyed, 74% stated they participated in at least one art fair, with larger galleries more active than smaller (and younger) ones. Due to the challenge of achieving measurable returns on art fair participation, some galleries likely found it not worth the effort. While the media and international buyers believe that art fairs are a dominant force in the market, many of the Asian galleries disagreed, with 26% not even participating in a single art fair. 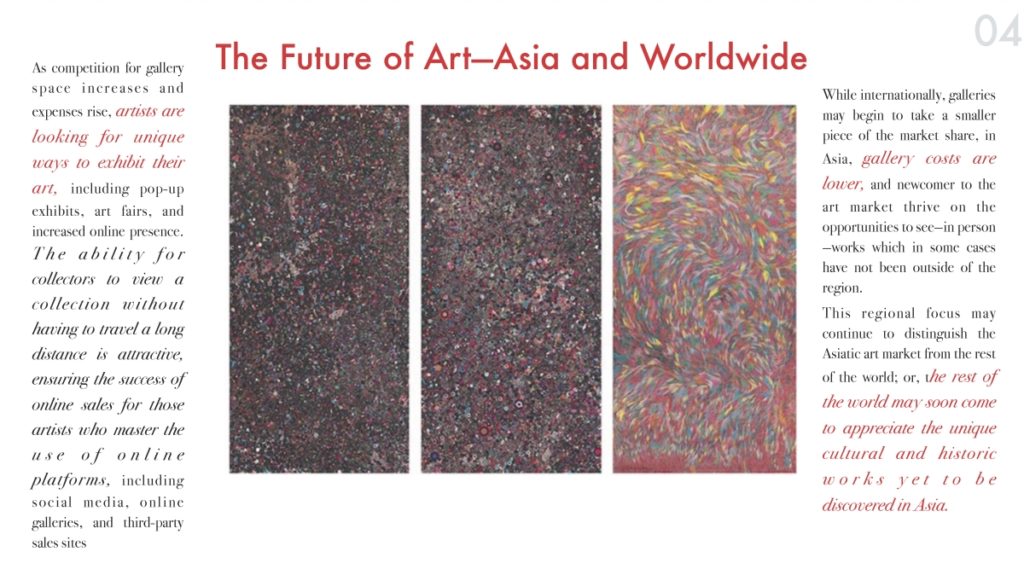 Perhaps Indian artists and artistry have finally broken out of India. 2017 saw an increased interest in pre-modern Indian art (up 87%) while international modern art saw a decrease of 22.5%. The growth in domestic popularity of Asian art, especially in India, will help boost awareness worldwide as it becomes more accessible and collectible by respected collectors.

Some factors in the growth of the Asiatic Art Market are more difficult to measure. The demonetization in India raised fears about the overall financial effects as well as the lack of technology, preventing processes and procedures for international purchasing. Although there was early concern about the results from this decision by the Indian government, the concerns faded relatively quickly, boosted by the overwhelming interest in Indian art. The GST (Goods & Svc Tax) was introduced in July of 2017, equalizing taxation in the country and, thanks to art being excluded as a luxury item for taxation, collectors and galleries breathed a sigh of relief. The surge in popularity of Modern Indian art, allowing young artists to break into the Indian art scene in droves. Prices are at an all-time high as museums, and galleries vie for the best pieces, leaving private collectors to push the financial limits.

The VAT (value added tax) in UAE was met with relief at a low rate of 5%, and the influx of artists to Dubai has expanded offerings to collectors, who visit this new art mecca in increasingly large numbers, allowing yet another region of the Asiatic art market to grow relatively uninhibited.

The Future of Art—Asia and Worldwide

As competition for gallery space increases and expenses rise, artists are looking for unique ways to exhibit their art, including pop-up exhibits, art fairs, and increased online presence. The ability for collectors to view a collection without having to travel a long distance is attractive, ensuring the success of online sales for those artists who master the use of online platforms, including social media, online galleries, and third-party sales sites. While internationally, galleries may begin to take a smaller piece of the market share, in Asia, gallery costs are lower, and newcomer to the art market thrive on the opportunities to see—in person—works which in some cases have not been outside of the region.