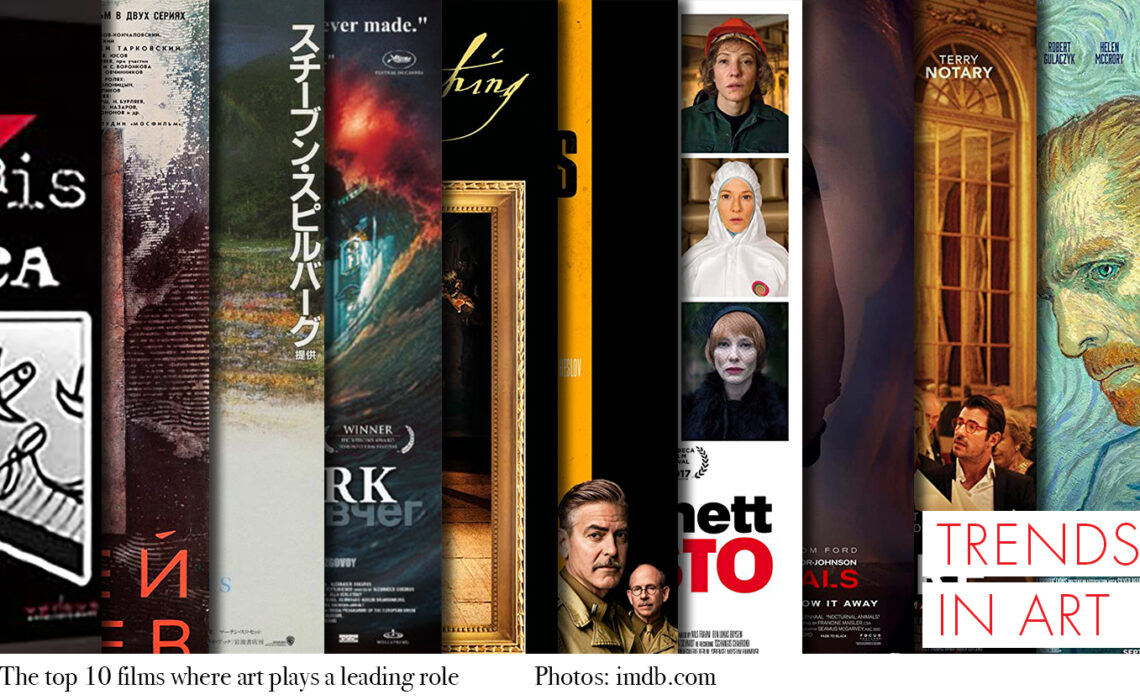 The relationship between cinema and art has produced extraordinary results. In this list, we chose 10 titles of films in which art is one of the main characters: the works dialogue with the protagonists or project transcendent meanings so that the spectator has different possibilities of interpretation. As in no other period, during the 21st century the cinema has been interested in art to establish surprising aesthetic dialogues and here we can see a sample of the most outstanding ones. The list is arranged chronologically.

Guernica is a painting that fuses two antithetical concepts: on the one hand, the peak of beauty of one of the most beautiful paintings ever made; on the other, the horror of one of the bloodiest massacres ever suffered in Spain. This 13-minute short film – directed by Alain Resnais and Robert Hessens – portrays what is perhaps Picasso’s most important work through an eloquent voice-over – modulated by María Casares and Jacques Pruvost – that dialogues with fragments of Paul Elouard’s narrative, newspaper clippings, etc. Guy Bernard’s musical arrangements endow one of the first pieces of the Nouvelle Vague, one of the most important movements in cinema, with melancholy and fury.

Tarkovsky is not only one of the references of Russian cinema, but one of the most representative names in the history of cinema. In Andrei Rublev, he portrays the life of a monk who, together with a series of companions, attends to paint the frescoes in the Kremlin’s Assumption Cathedral. Based on Rublev’s life, and played by Anatoli Solonitsyn, the film is as interested in painting as it is in the theme that obsessed Tarkovsky throughout his career: time. It won the International Critics’ Prize at the 1969 Cannes Film Festival. It can be seen on Filmin.

Directed and written by Kurosawa, this film represents through eight fragments the dreams of the Japanese film director. The opening film of the 1990 Cannes Film Festival shows themes such as death, spirituality, childhood and disasters, linking the personal and dream world of the director with one of his artistic references: Vincent Van Gogh. Produced by Steven Spielberg and Georges Lucas, and played by Martin Scorsese (who plays Van Gogh), the film reflects Kurosawa’s desires, anxieties and internal conflicts as if it were a large canvas that is at times endowed with movement.

This 96-minute film is the first feature film in the history of cinema to be shot in a single sequence; in other words, it is a film without cuts. The seventh movie of the Siberian-born filmmaker was shot on 23 December 2001 at the Hermitage Museum in St. Petersburg to show 300 years of Russian history through its political characters and most emblematic artworks. In 2015 the director achieved something similar in Francophonie, a story where two men join forces to save the Louvre Museum’s pieces from the Nazi army. The Russian Ark tells the story of a surprising journey through the 33 rooms of the Hermitage Museum, accompanied by three orchestras and nearly 2,000 actors. Premiered at the Cannes Film Festival in 2002, its technique and aesthetic possibilities continue to dazzle moviegoers. It can be seen on Filmin.

That Peter Greenaway has been interested in making art and cinema converse is not a novelty: in practically all his films art is a fundamental aspect that goes beyond the merely decorative. This can be seen in The Cook, the Thief, the Wife and Her Lover, The Pillow Book or The Architect’s Belly, not to mention the stimulating exercise he did with The Last Supper when he made a sound and light intervention to da Vinci’s work. The Nightwatch portrays Rembrandt’s life and the production process of one of his most representative works. The film portrays with melancholy one of the most conflictive stages of the dutch painter. As in the rest of Greenaway’s filmography, the moving images are related to other arts such as theatre, literature and opera.

Played by Matt Damon and directed by Georges Clooney, the film portrays a small group of historians and art experts who, at the end of World War II, have the mission of recovering the artworks taken by the Nazis, in order to return them to the original owners. The film, based on the book The Monuments Men: Allied Heroes, Nazi Thieves and the Greatest Treasure Hunt in History by Robert M. Edsel, portrays the conflicts and adversities faced by this group of allies in order to preserve the pieces of art as historical and cultural value. A solvent story that confirms the seriousness with which the American actor approaches his projects as a director.

As Eric Hobsbawm said: the 20th century was the century of manifestos. Every artistic movement that prided itself on being so, made public its declaration of principles to establish before the world an idea of innovative art. Performed by Cate Blanchett and directed by Julian Rosefeldt, this film shows the most emblematic manifestos of 20th and 21st century art through a structure that is rarely seen: while the protagonist pronounces the manifestos, her words dialogue with the scenes, the characters’ clothing or the tones of voice with which they are exposed. The manifestos of Dadaism, Surrealism, Futurism, Fluxus are sometimes shown ironically, sometimes reflectively. The tape was recorded over 12 days in Berlin and had its world premiere in December 2015 at the Australian Centre for the Moving Image. Each of the segments lasts about 10:30 minutes which, in the manner of a short film, puts into moving images some of the most powerful ideas of Manuel Mapples Arce, Tristán Tzara, Kazimir Malévich and Werner Herzog.  It can be seen on Filmin.

The story of Tom Ford’s second feature film is closely linked to contemporary art: Susan (Amy Adams) is a wealthy gallery owner who seems to have everything: money, a solvent company, a house with Jeff Koons’ works and an office with some Damien Hirst’s pieces. However, Susan’s countenance is cold and distant: her husband cheats on her and she lives obsessed with the memory of a love that can never be again. Based on Austin Wright’s novel Tony and Susan (1993), the works of art shown in the film are closely linked to Susan’s emotions. The superficiality and obsession of the protagonist and her fondness for artists like Hirst and Koons are starting points for generating interpretations of capitalism, the art market and the predominant role of the United States as a geographical area that drives wild consumerism. It can be seen on Netflix.

Ruben Östlund has built a meticulous critique of contemporary art using irony and black humor as his allies. The Square tells the story of Christian, the manager of an art museum that is about to open its next exhibition, homonymous with the feature film. But everything takes a surprising turn when our protagonist’s wallet is stolen and he decides to go and look for it in a mysterious building. The film is also interested in deconstructing the world of advertising and media from an inquisitive perspective. For the making of this film, we can see the influence of names like Garry Winogrand and Robert Smithson, as well as a work made by the director in collaboration with Kalle Boman. It can be seen on Filmin.

The first tape made with animated paintings pays tribute to the impressionist artist through a craftsman’s technique: each of Loving Vincent‘s 56,800 frames was painted on oil, thanks to the work of 115 different artists. The film tells the story of Van Gogh’s last years by focusing on his pictorial obsessions and his everyday troubles. Using a series of effective and stimulating leaps in time and space, this story begins one year after Van Gogh’s death. Since then, the story looks at the turbulent past of one of the greatest exponents of art history. He won Best Animated Film at the 30th European Film Awards in Berlin. It can be seen on Filmin.