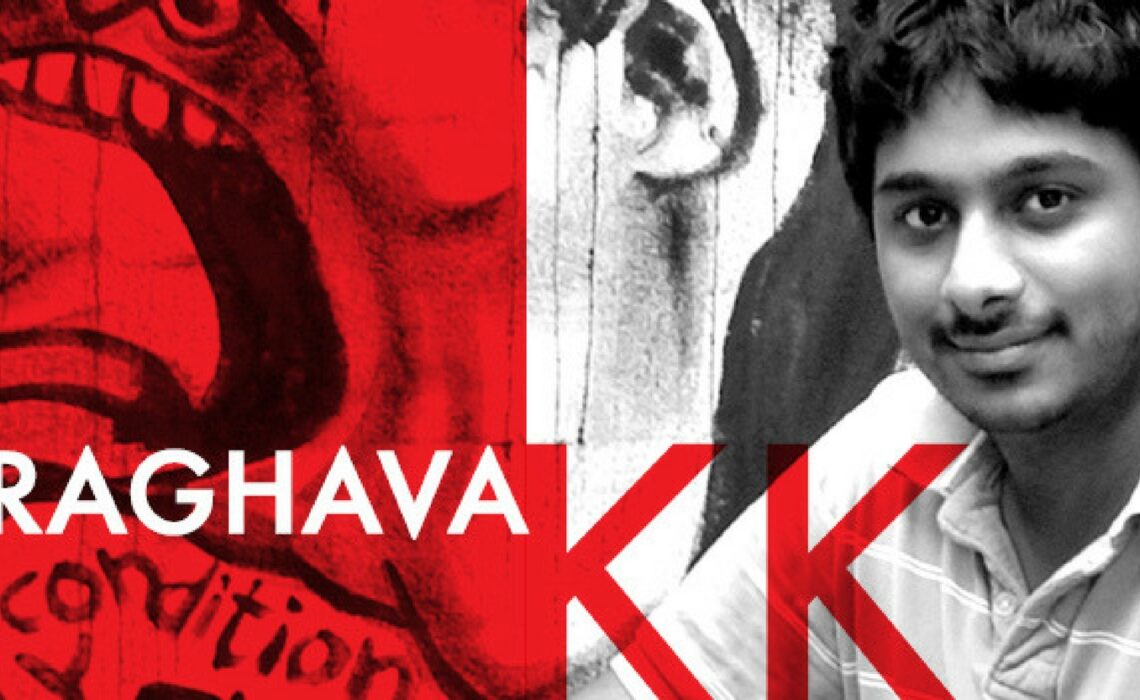 Indian-born artist Raghava KK entered the world of art through self-discovery. Discovering a skill, he could be proud of in the midst of a Catholic school where he was not academically or athletically gifted; he delved into cartooning. Upon leaving school, he began a career in drawing cartoons—providing his services wherever he could, and always sharing his love of drawing with children. Not only did he teach them, but they did the same, teaching him spontaneity, laughter, and the freedom of expression.

A volatile exchange after 9-11 led him to make a life change, giving up cartooning, and take to travel. A chance meeting with an Italian artist led him to the decision to become a painter. He taught himself to paint using his hands and feet, each work becoming larger. After painting a flamenco dancer, following a dance company and selling some works along the way, he began to earn money. He discovered a way to bring his works to life with the collaboration of art and dancers.

This idea of connecting dancers to works of art led to more: fashion shows, more dances, and even works with children. Working in NYC, he was fascinated by billboard arts, whose work seemed to come to life without the addition of moving beings. He began creating similar large-scale works, even once painting a car in graffiti-like fashion.

The Start of an Artist’s Career

Raghava KK’s wife, Netra, began selling his works in the US, and later managed to move him (and his career) to the United States. As his career grew—along with his flamboyant reputation—they organized their Indian wedding, celebrating everything art, and included the thousands of individuals who helped to shape his career. The spectacle was even featured and talked about worldwide for years later, and is even considered by Raghava KK to be a work of performance art itself.

After a family health scare, Raghava KK’s work turned dark. His audience changed, and then disappeared, as his work reflected his state of mind. Exploring sexuality and gender issues, even political activists turned away, and he was banned from many exhibitions. He returned to India to re-evaluate his life, starting a family.

After the birth of his first child, Raghava KK moved his family to NY and reinvented his work. Focusing on his desire to work with children, this goal was exemplified in his 2011 iPad book “Pop-It.” Focusing on the many variations which can define a family, Raghava KK’s project used technology and art to show children love, harmony, and creativity in an engaging format, winning a Kirkus Book Award for the Best of 2011.

Raghava KK has collaborated with Erykah Badu to design T-shirts for her charity, Blind, created artwork for Paul Simon’s concert tour, and exhibited at locations like the LA Art Fair and Art Musings in Mumbai. In the arena of public speaking and education, he has spoken at NYU, Ecole des Beaux-Arts, and Carnegie Mellon, as well as taught at MIT (Nuvu Studio), where he is helping to develop a new form of participatory art which enables painting/drawings to become touch screens within picture frames. Using brain-wave technology in an EEG headset, viewers’ own movements and feelings dictate and become part of the art experience. He wants to use this technology to increase children’s understanding of space and perspective.

Raghava KK’s works, a combination of his early works in cartooning and later experience with painting, speaks to viewers while reducing the confrontational features of the challenging subjects he addresses. The cartoon quality provides a sense of humor to otherwise debatable attitudes, which surround the polarity of opinions found throughout the world.