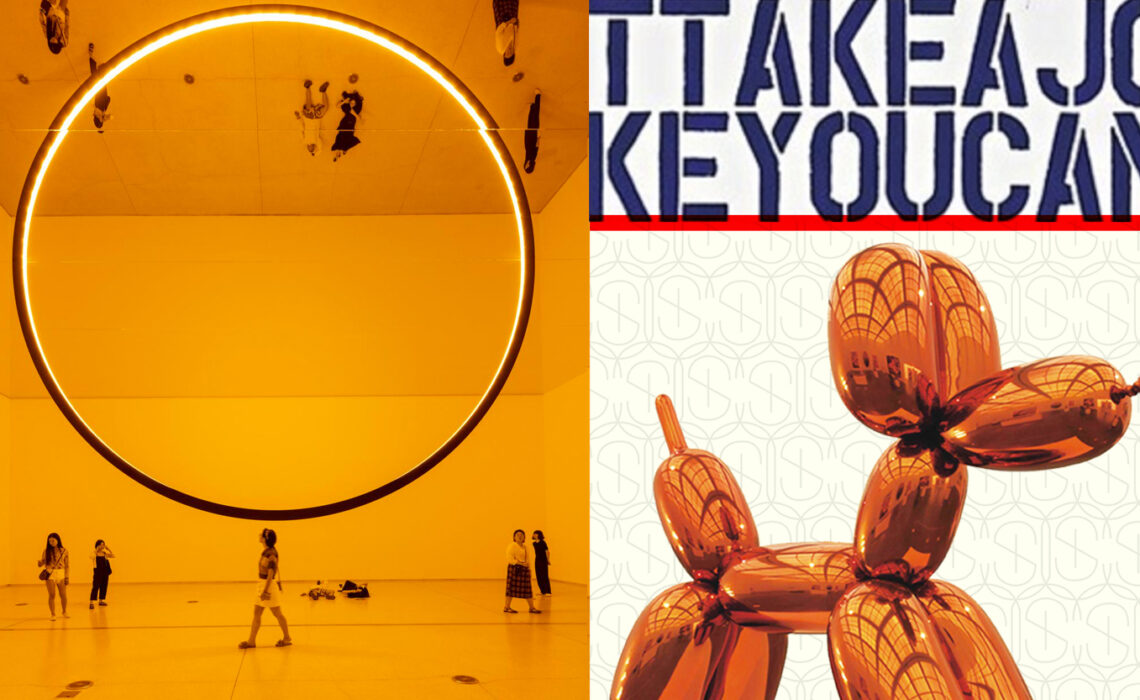 Investing in work by artists who are still alive can be a bit tricky, but here’s our list of top 10 living artists to invest in art to help choose wisely!

When creating a valuable collection, buying works by deceased masters like Warhol, Basquiat, Picasso or Pollock can be a smart move. They can’t create any new pieces (which raises the value of the existing ones) and you might be adding a well-recognized name to your stock.

But amazing and valuable art is not just for the old masters…let us suggest you 10 living artists for your investment:

Olafur Eliasson is a Conceptual Danish-Icelandic artist concerned with sensorial experience and perception. Through installations, public projects, films, photography, and paintings, Eliasson activates the senses of his viewers in immersive artworks, as seen in his The Weather Project (2003) installation at the Turbine Hall of the Tate London. His practice has been compared to Robert Irwin and James Turrell for his interest in the reflexive qualities of the audience and his attention to light. His works are held in the collections of The Museum of Modern Art in New York, the National Gallery of Art in Washington, D.C., and the Kunstmuseum Basel, among others.

Jeff Koons is one of America’s most popular contemporary artists. His Neo-Pop aesthetics and wry appropriations of consumer objects, express reverence for popular culture. He is perhaps best known for his oversized sculptures of kitschy souvenirs, toys, and ornaments that are bright and shiny, as seen in his Celebration (1994–2011) series. In 2013, his Balloon Dog (Orange) sold for a record-breaking $58.4 million at Christie’s auction house, making him the most expensive living artist at the time.

Christopher Wool is a contemporary American painter. In his paintings, Wool contrasts bold stenciled text or abstract brushwork with white backgrounds. In the stenciled works, words run together and breaks arrive at the edges of the canvas, as seen in his Apocalypse Now (1988), which bears the phrase “SELL THE HOUSE SELL THE CAR SELL THE KIDS.” A contemporary of Jean-Michel Basquiat, Julian Schnabel, and others in New York’s downtown art scene in the 1980s, Wool introduced graffiti techniques to his work, later incorporating silkscreens and paint rollers. 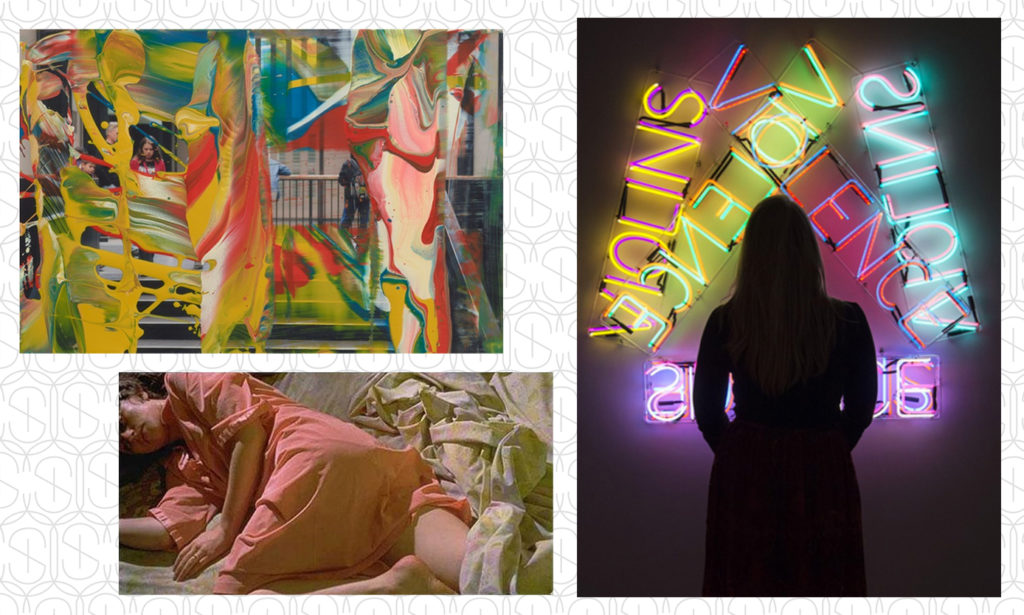 Gerhard Richter is a contemporary German painter considered among the most influential living artists. Richter’s experiments with abstraction and photo-based painting greatly contributed to the history of the medium. Culling from his vast image archive known as the Atlas, Richter’s paintings reference images of his daughter Betty, flickering candles, aerial photographs, portraits of criminals, and pastoral landscapes.

Bruce Nauman is an American Conceptual artist working in a wide array of media that includes neon lights, video, and performance. A central figure of 1970s art and pioneer in the development of Post-Minimal art, Nauman’s greatest contribution is perhaps his self-analytic investigations of the creative mind and its doubts concerning the production of art. His work is included in the permanent collections of the Solomon R. Guggenheim Museum in New York, the Tate Modern in London, the Centre Pompidou in Paris, the Kunstmuseum in Basel, and many others. Nauman lives and works in Galisteo, NM.

Cindy Sherman is an American photographer and filmmaker whose self-portraits offer critiques of gender and identity. What made Sherman famous is the use of her own body in roles or personas in her work, with her seminal series Untitled Film Stills (1977–1980) being particularly important. These black-and-white photographs feature the artist herself as a model in various costumes and poses and are her portrayals of female stereotypes found in film, television, and advertising. Her work has been the subject of many museum exhibitions, including those at The Museum of Modern Art. Sherman lives and works in New York, NY. 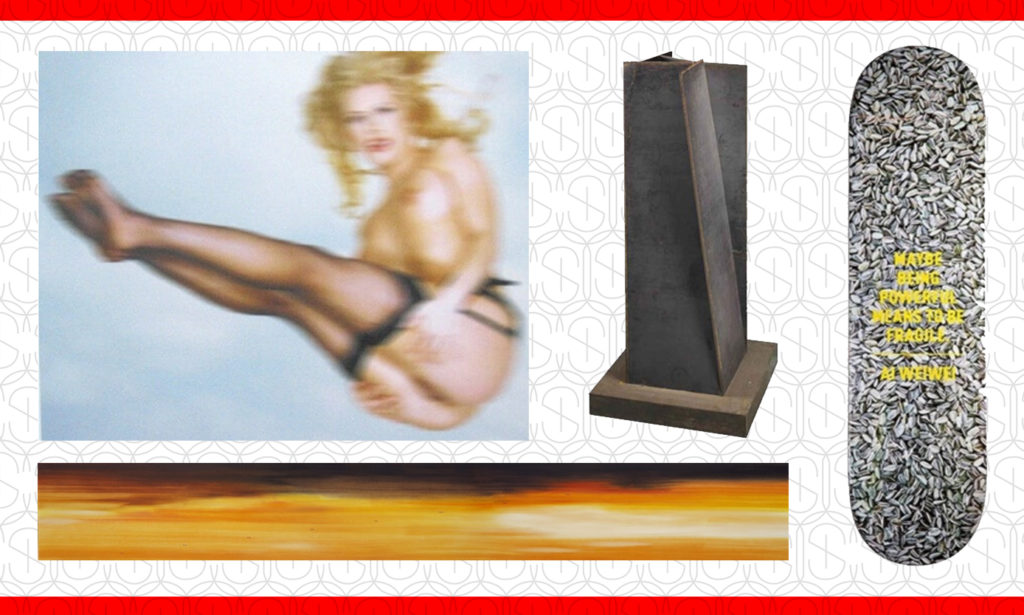 Thomas Ruff is a contemporary German photographer and prominent member of the Düsseldorf School. His broad oeuvre incorporates images of domestic interiors, austere portraits, blurred pornography, photograms, and found JPEGs which intend to spur the imagination rather than capture reality. Ruff continues to live and work in Düsseldorf, Germany. His works are held in the collections of the Art Institute of Chicago, the Tate Gallery in London, the Kunstmuseum Basel, and The Museum of Modern Art in New York.

Ai Weiwei is one of the best-known artists working today. His provocative blend of Chinese history and tradition within a wholly contemporary practice serves as a form of human rights activism, cultural commentary, and critique of the global imbalance of power—a fact that has turned Ai into a political target. The artist’s works are held in the collections of the Centre Georges Pompidou in Paris, the Los Angeles County Museum of Art, and The Museum of Modern Art in New York, among others.

Ed Ruscha is an American artist whose oeuvre melds Pop Art iconography with the documentarian rigor of Conceptual Art. With a practice that spans drawing, painting, photography, film, printmaking, and publishing, Ruscha’s background as a graphic designer is evident in his subtle use of typography. He is perhaps best known for his artist’s books, such as Twentysix Gasoline Stations (1963), as well as his word paintings which skew the meaning of each word through color, background, and font.

Richard Serra is a contemporary Minimalist artist known for his monumental steel sculptures. Often daunting in scale, Serra’s swooping architectural curves often provoke dizziness and disorientation as viewers walk through their winding passages. Though he also makes paintings and prints, it is Serra’s exploration of the properties of unconventional materials—such as Splash (1968–1970), a series using molten lead, and Belts (1966–1967), sculptures of vulcanized rubber—gradually increased the scale of his work.

Find these and more artists bios in ArtNet