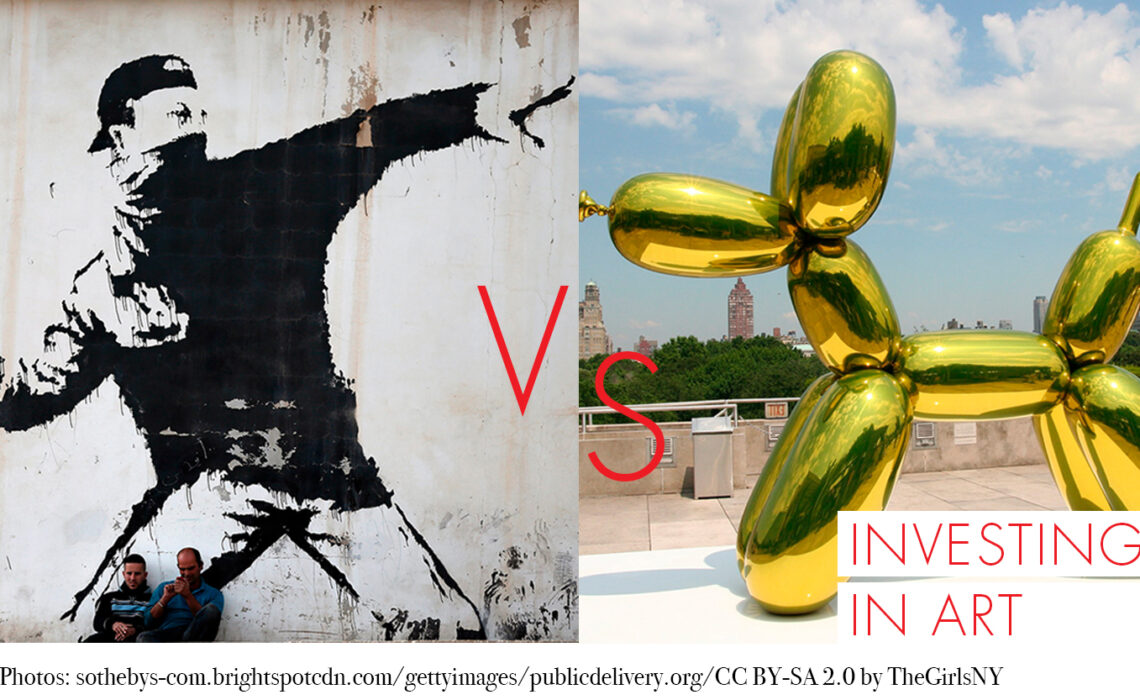 In the art environment, some paths are drawn from opposite approaches. Jeff Koons (Pennsylvania, 1955) and Banksy (Yate, Gloucestershire, 1974) are two referents of contemporary art, each with different and defined work processes: for the first one, art is a consequence of the market, closely linked with the forms of advertising and with the dynamics of consumption. For the second one, aesthetic expression aims to criticize the political and institutional forms of society.

Koons’ strategy is decisive: question consumer objects using sculptures and installations that in the museum space become consumable objects themselves. Instead, Banksy uses the appropriation of urban space and anonymity to pose a critique of society through murals and graffiti. Both approaches constitute paradigms in contemporary art, and their works have been part of the most important auctions. To understand the way in which both artists contrast, here we develop some interesting points of their aesthetic proposals. 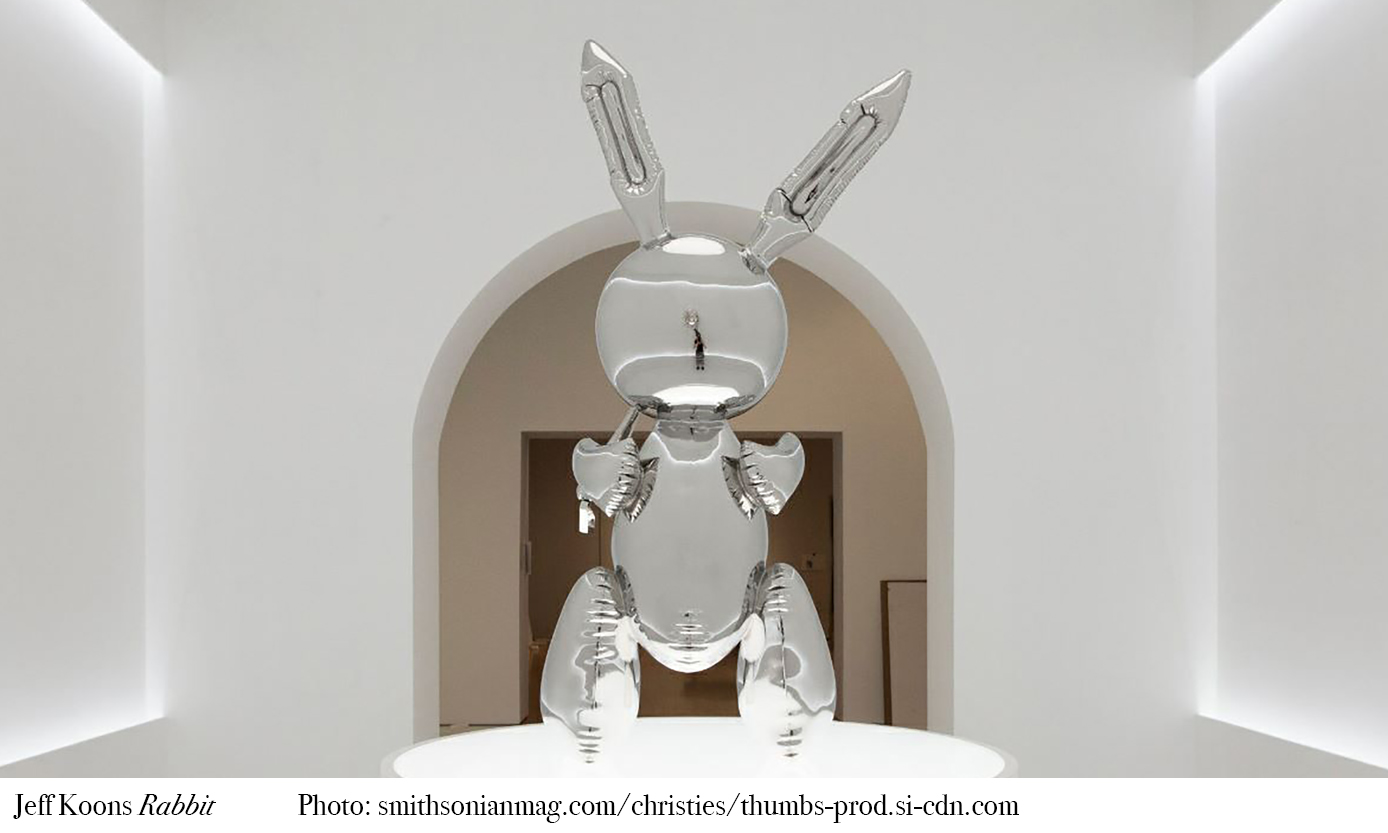 The controversial identity of the artist

Jeff Koons has managed to transcend his work. The image of the artist-businessman constitutes a character that, within global narratives, has determined the aspirational temperament of professional success. In May 2019, he became the author of the most expensive work sold for a living artist: Rabbit reached a record price of $ 91.1 million. Wrapped amid scandals of plagiarism, Koons has managed to position itself within the market, winning various awards such as the Medal from the Museum of Fine Arts School (Boston, 2003), the Artist of the Year Award by the American Friends of the Aviv Museum of Art & Architecture Tel (United States, 2007), and Icon Artist of the Arts Award by Bruce Museum (Connecticut, 2011). 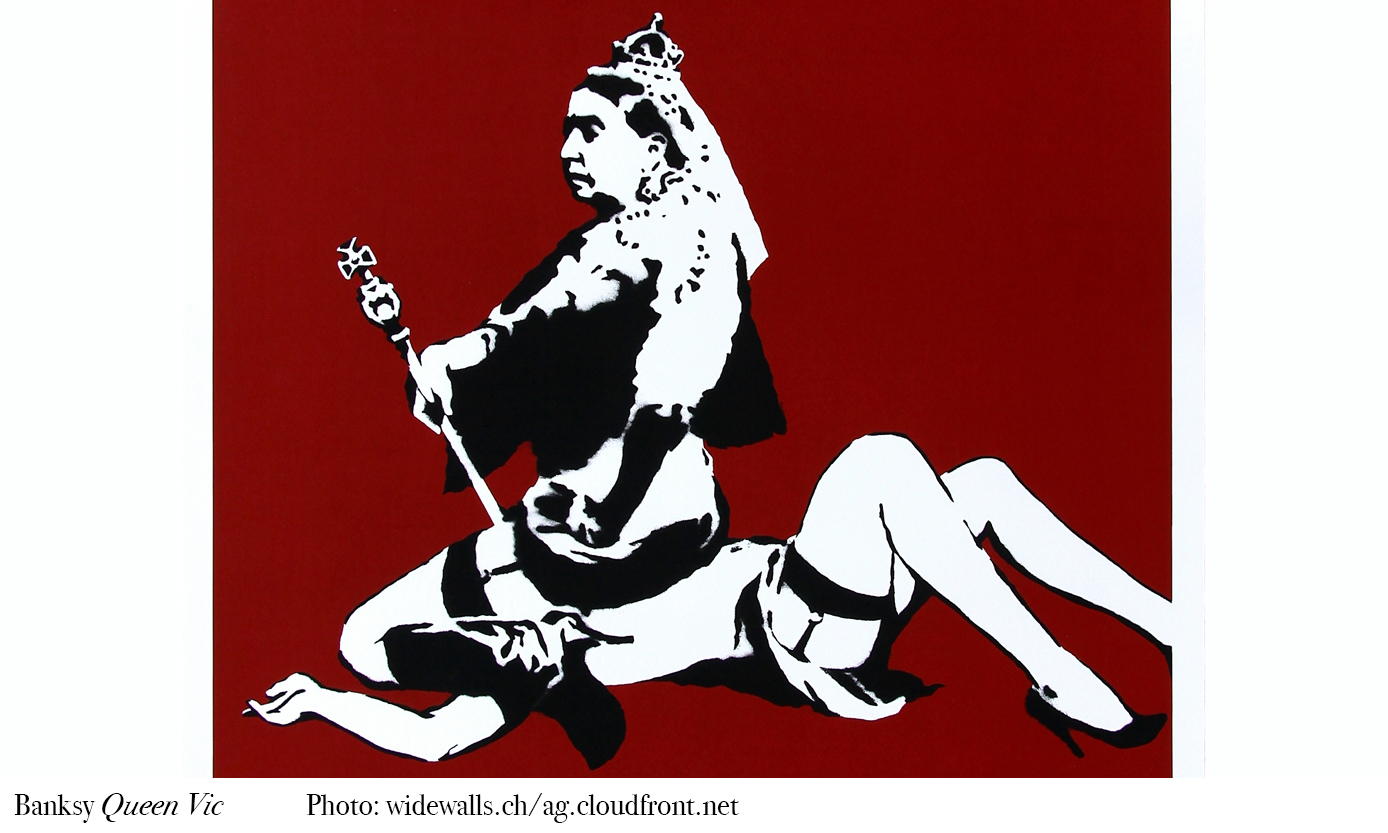 On the other hand, Banksy’s work is shrouded in mystery: the artist’s hidden identity has helped create different stories about his intentional anonymity. His artistic career can be interpreted as a fugitive from the law (some narratives speak of “Robin Banks” or “Robin Gunningham”). After all, the myth of the person behind the urban murals has not impeded his positioning of the market: personalities like Christina Aguilera have bought his works at auctions, establishing new parameters in the valuation from the artist (in 2006 she bought the work Reina Victoria and two prints for 25,000 Euros). 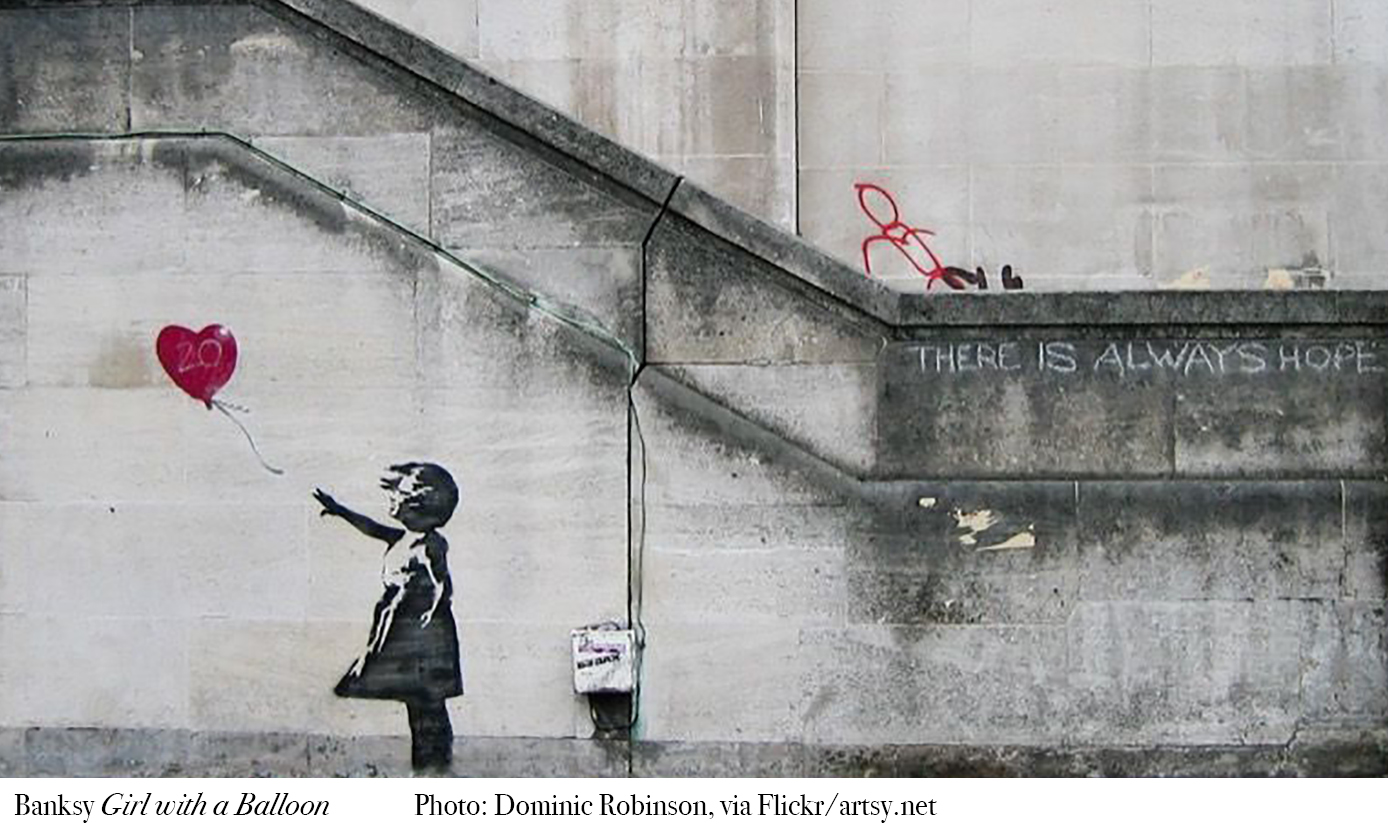 The effects of the first works

The first work attributed to Banksy is the mural depicting a girl releasing a red heart-shaped balloon (2002). This piece appeared on the stairs of the South Bank in London, and in 2017 a survey by the Samsung Company confirmed that the Girl with a Balloon is the most popular among the English. As a consequence of its popularity, some reproductions of the work were embroiled in interesting controversies: Banksy carried out a variant in 2014 for a political campaign linked to refugees from Syria; and in 2017 he design flyers with this image for the anti-conservative political campaign in the UK general election. Finally, in 2018 in an auction organized by the Sotheby´s house, once a framed copy of the work was sold for more than a million pounds, the piece was intentionally shredded, as a result of a performance in which the author sought question the presence of art. 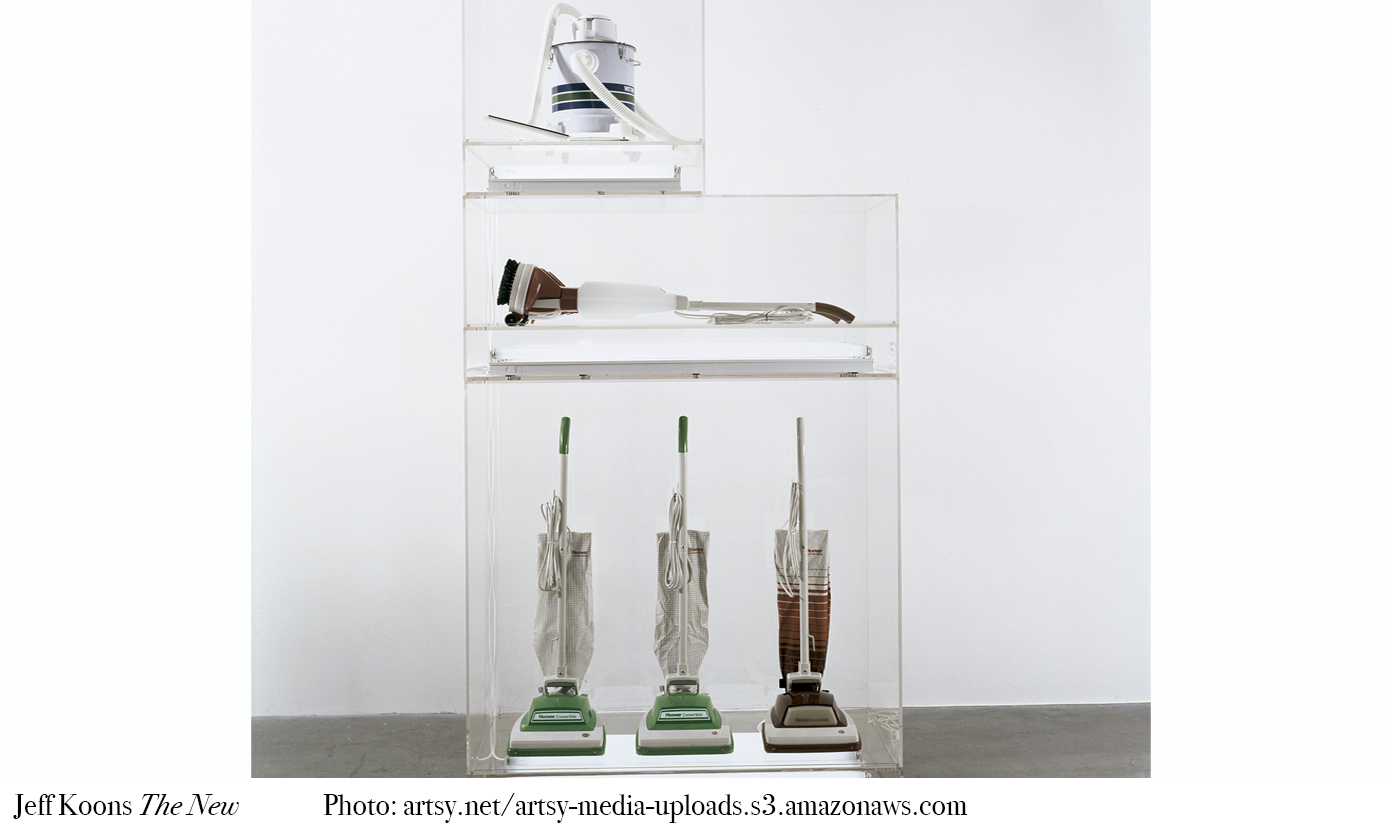 Jeff Koons’ first exhibition, entitled The New, was held in the window of the New Museum of Contemporary Art in New York (1980). In this exhibition three sculptures are shown, characterized by vacuum cleaners illuminated by fluorescent light, and which together simulated the showcase of a supermarket. The work was a benchmark in contemporary art: by way of mockery, Koons questioned the appearance inherent in the consumption practices of American society. Accused of plagiarism and lack of originality, the artist’s proposal was limited to the topics worked by artists such as Marcel Duchamp (Blainville-Crevon, 1887; Neuilly-sur-Seine, 1968) or Andy Warhol (Pittsburgh, 1928 – New York, 1987). To emulate the history of the latter, Koons opened a workshop with about 30 helpers to operate similarly to Warhol’s The Factory studio.

Jeff Koons has taken the contradiction of objects as the basis of his aesthetic proposal: using strategies of Post-Pop art, Minimalism and Kitsch art, the artist confronts the daily perception of the object and transposes it into an exacerbated dimension of proportion and matter. In this contradiction, Koons manages to problematize the subject’s position vis-à-vis the objects of consumption that constitute his social reality.

On the other hand, Banksy problematizes the perception of the object from a different aesthetic operation: the visual appropriation of space. Taking urban art and graffiti aesthetics as an axiom, Banksy redesigns the architectural panorama to draw figurative images that question social and political conditions.The intervention of urban space is, in this sense, a resource that allows us to contrast the usual notion of private property and public space.