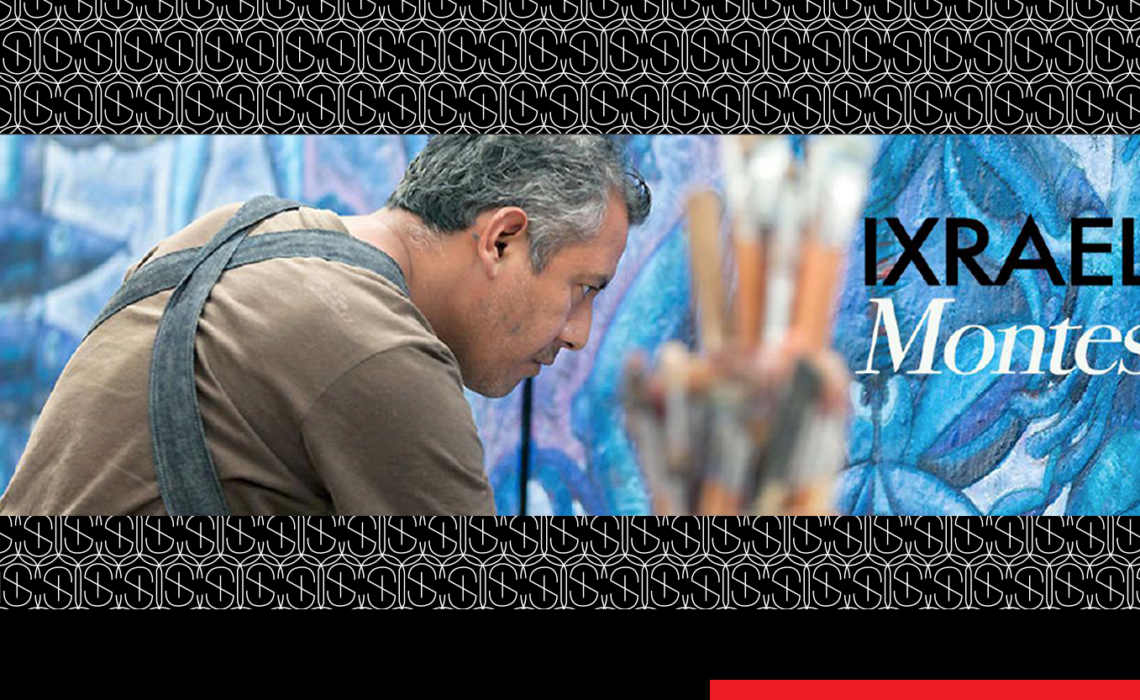 Ixrael Montes is a visual artist. He is one of the most recognized artists in Oaxaca, Mexico, a territory known for its artistic offspring. At heart, Ixrael is a simple man—with a quick mind and vivid imagination. He was born in a small community in Oaxaca, Mexico.  As a child, his animal companions were cows, dogs, herons, and iguanas. In his work, he consistently returns to the animals and landscapes of his childhood. His other less-substantial companion was and is the vibrant imagination that led him on an exploration of the imaginary.  He understood this call was a gift and must be followed even if it meant giving up the early aspirations of a young man in a simple village: Land, family, and community.

A Lifelong Journey of Creativity and Inspiration

From time to time, Ixrael returns to his hometown and picks up the threads of that life as if he’d never left it. These people and this environment is a recurrent golden theme running through his work. Thus, he faces the canvas as if it were an old friend; the passion of the people expressed in bold strokes and varied shades of color: red and blue as well as earth tones.

At nineteen, he relocated to Oaxaca City to study visual arts at Escuela de Bellas Artes de la UABJO.  Here, he met the Master Takeda, the man who would have the greatest influence on his art and indeed his life. In his thirst for beauty and knowledge, a year later, he entered the Rufino Tamayo Plastic Arts Workshop. Like his fellow Oaxacan artists, he absorbed the carnival of colors and culture that surrounded him and these, too, became wheat for his creative mill.

Throughout his 18-years of concentrated painting, his vision has evolved. From his figurative and magical offerings came abstraction. Abstraction has fused with his magical visions into a new form of Ixrael Montes art.  He has always experimented with different techniques and materials.  In relation to an iconic theme, his painting is a little graphic and the influence of the Africanized coastal masks easy to discern. His art shares the intimate evolution of the child as he becomes a man, experiencing fears, yearnings, divine manifestations and carnal seductions.

‘Inspiration is subjective and almost implausible,’ says the artist when referring to the origin of his works.  He also says that his subject alludes to everyday scenes that usually pass unnoticed ‘tinged somewhat ironic to pay the role of the character and element that I use in my paintings.’

Chimeras of a Fisherman Collection

In Pescador Nocturno (“Nocturnal Fisherman”), in aquafortis and aquatint, and in black, a stylized iguana from the artist’s childhood claims the canvas and the imagination.

Again in aquafortis and aquatint and black and gray, Reproduccion (“Reproduction”) leads the imagination on a visual journey into an animal embryo.  Each viewer of this piece is likely to see a different image which sharpens one’s interest and stimulates one’s intellect. Reproduccion is our Featured Artwork.

La Ultima Tentacion (“The Ultimate Temptation”) mirrors the religious and exhibits the artist’s skill with the human body drawn with his own style. Note the birds, hatchet, and the fish.

Laguna de Chacahua (“Chacahua’s Lagoon”) is a study in beautiful and peaceful shades of blue, but there the serenity ends. This piece reveals a wealth of feeling and poses questions then answered in the artist’s imagery.

In this article, we have presented a sprinkling of the talent of our Featured Artist, Ixrael Montes.  The entire collection is a study of his vision, his culture, and his dreams.  Take a moment to peruse his artwork in Chimeras of a Fisherman Collection and get to know Master Montes through his creations.

Sybaris will introduce you to the best of the best in art.