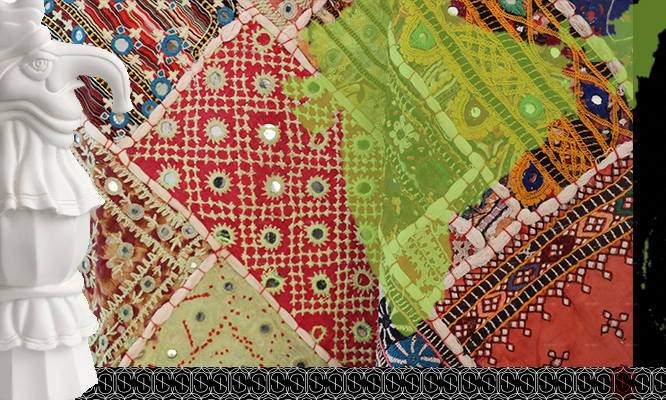 India is history, tradition and culture blended with a spicy cuisine that delights the palette as the beauty of the country delights the eye. The history that we mentioned dates back five millennia. This immense South Asian country offers a beautiful and varied terrain – from snow-capped Himalayan peaks to the sandy white beaches and azure waters of the Indian Ocean shoreline. It boasts the iconic Taj Mahal, the final resting place of a Mughal Empress and chief consort of Emperor Shah Jahan.  Pilgrims bathe in the Ganges in Varanasi. Rishikesh is a center for yoga and a Himalayan trekking base.

The art of intriguing India assumes as many forms as its diverse topography and culture. It is often modernistic, always breathtaking. In this article, we hope to familiarize you with emerging and established artist who create beauty in its varied and enchanting forms—whether plastic arts, visual arts or stunning textiles.

In the past decade, art from India has gained greatly in popularity. At auction, contemporary Indian art has realized millions of US dollars. While the most expensive and popular Indian artists remain modernists like Gaitonde, Souza and Mehta, younger artists including the ones introduced below now enrichen the Indian art experience and are much sought after in the marketplace. 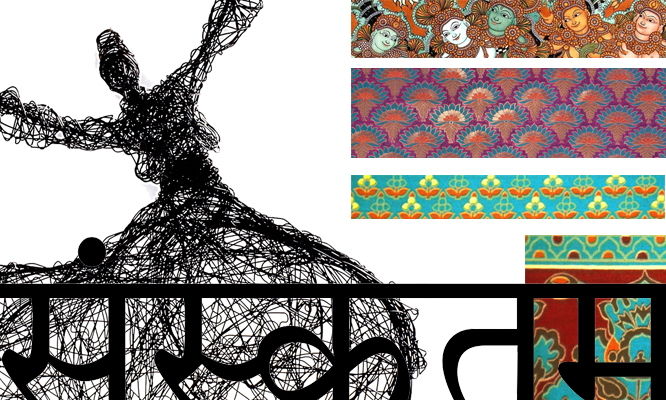 Mythology meets comics in Nandan Purkayastha’s art. He is a graduate of the National Institute of Fashion Technology but chose to pursue a career in fine arts. Where does this artist, who studied fashion, find his inspiration? … in ancient Indian mythology and a most refreshing (and maybe surprising) source—the cowboy classics of the Old West. Who was his cowboy hero? Roy Rogers? Gene Autry? The answer might be quite as interesting as the man himself. His works are peopled by bizarre characters, reflecting an intriguing, surreal world. Purkayastha’s creations manifest most often in monochrome drawings and paintings in intricately detailed pen-and-ink on paper. Faceless idols and people, featuring interrelated elements composed in contoured spiral patterns, give life to his imagery. The figures’ drapery and hairstyles as well as the contours of his birds and beasts reveal the influence of his fashion training.  Born in 1986 in Assam, the young maestro’s full name is Debapriyo Nandan Purkayastha. He lives and works in Kolkata.

Reena Saini Kallat is a visual artist interested in how memory affects us…what we choose to remember, what we choose to forget and how we view the past… a deep and evocative subject. Both as object and imprint, she has employed the rubberstamp as a theme, working with official records, including names of missing persons and lost objects, to artistically show bureaucracy at its finest. Her works made with electrical cables, wires usually serving as conduits of contact that transmit ideas and information, are woven into complex entanglements, which then, in turn, transform into barbed-wire barriers. Using salt as a medium, she studies the tenuous yet intrinsic relationship between the body and the oceans, highlighting the fragility and unpredictability of existence. 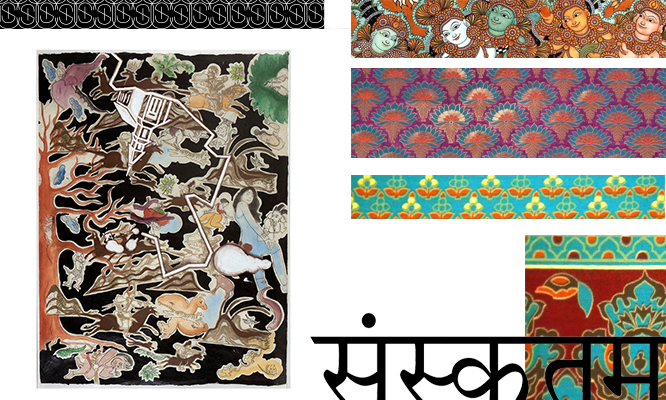 Are you looking for an artist with his finger on the pulse of the future? Ajay Dandre is that creative genius. His work reflects his passion for the evolving language of the future. After all, technology is generating its own form of communication, one that is more visual than auditory. In his detailed paintings, the spectator steps aboard a time machine and is transported to the next century, here to encounter the stuff of science fiction, which is rapidly developing as our new reality. Mechanical-organic composites—chimeras, hybrids and devices—people his jewel-like images. Cyborgs, robots, space stations and interstellar probes serve as guides in expanding the consciousness, encouraging the spectator to take a step beyond and relate to the fantastical.

K.K. Raghava, also known as Raghava KK, began his career in art as a newspaper cartoonist, and, even today, the cartoonist’s bold line eye for truth empowers his art. His offerings are as diverse as iPad Art, interactive art, painting, film, installation and performance. Globally acclaimed, his art tests the boundaries of creativity and technology. He blends both in interactive experiences that invite the spectator to participate in his vision, all the while challenging and changing perceptions. In one engaging interview, he explained how his art had guided his life in new directions and how his life experiences have driven his many reincarnations as an artist. He lives and works in New York and India. 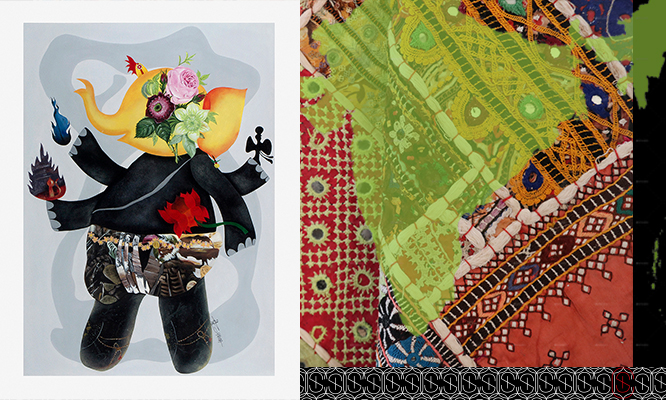 The engaging Smriti Dixit is a classically trained vocalist. However, in 1993, she stepped out of the music world and into the ever-changing landscape of visual arts. In 1994, only one year later, she earned her BFA from Maharaja Sayajirao University in Baroda. Her art derives from her everyday experiences…the small moments and intimate interactions that drive one’s life. Using handmade techniques, she engages the tactile nature of the materials she uses, reflecting her very feminine procedure. Her work acknowledges the traditional art of sewing, incorporating uniquely created textures and patterns into her contemporary abstract color works.  The artist lives and works in Mumbai.

We cordially invite you to India, without leaving home and hearth by visiting our Malabar Dreams Collection. These profiles are mere glimpses of the men and women behind the magic. Visit their creations firsthand in the Sybaris Collection. We welcome you as a guest, a fellow art lover or a new friend.