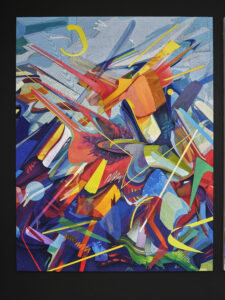 Memory and history in painting
Interview with Omar Rodríguez-Graham

Regina De Con Cossío: Do ​​you have a methodology for artistic creations (specifically for painting)? What does it consist of?

Omar Rodríguez – Graham: I would say that I have a methodology that is based on the idea of ​​the construction of painting. For me, the important thing when I start to make a work of art is actually trying to start a conversation with different moments in the historical arc of painting and, from that, extract elements, whether images or techniques, from those pieces to later generate another construction of my own current situation. That means that I treat in a certain way the history of painting and the images that I collect from this history as types of samples that, when modulated, generate compositions that in themselves work to present the method of pictorial construction in a very clear and transparent way.  What I want is for painting to function as a type of record in which its own act of construction, of creation, is documented, because for me that transparency and that evidence of the artist’s hand, of the artist’s process, is extremely important.

RCC: In an interview with Daniela Pérez you mention that the paintings, the more sculptural, the less narrative. Could you explain a little bit more about your position regarding narratives. In many spaces it is said that a painting cannot be narrative because it does not necessarily tell a story. However, when you make a series of paintings that revolve around the same theme, even though there is no story to tell, there is a certain narrative. Do you think that hidden stories can be found in your paintings?

ORG: What I was referring to in that interview with Daniela Pérez where I mentioned that while a work is more structural it is less narrative, what I try to do is find a way through the structure of the composition of the formal elements of a work of art, those same ones that catch the viewer more and that move us away from the idea of ​​the image as something that tells a didactic story.

I’m not really that interested in the narrative theme in terms of my using the painting as a kind of illustration of an event, the painting itself is the event, now that doesn’t mean that within that catastrophe, as Gilles would say Deleuze, or that pictorial exploration that happens in each work, there are no narrative elements, that would be to impose a completely unequivocal vision on the viewer. For me it is more important to leave the freedom of the encounter between the spectator and the work of art so that the spectator finds his own path, that from that encounter, that space of clash between the work of art and the observer, an experience is generated that such Maybe take the viewer into a narrative experience or a story or something more literary.

What is important to me is not so much presenting a story but rather leaving the interpretation open so that the viewer can find their own path, in a certain way what ends up happening is that the work of art becomes a generator or a seed that germinates in the mind and from there its own identity is found, but each identity is very subjective, it is not an identity shared among all the spectators, and that is where there can be this idea of narrativity or the story that is told through the work of art but always starts from the possibility that the encounter is an encounter between the spectator as an individual and the relationship that is generated is a completely unique relationship.

RCC: In that same interview you mention that you often create images that, in some way, maintain a distance from the reality in which you live. You say: “Ultimately, the effect of this introspection and of painting the most uncritical subject matter one could imagine, while the world one inhabits is in such chaos, is itself a critique of that world. In many ways I feel like Morandi, painting honest little still lifes while Europe was devoured by war. However, in recent times, conjunctural artistic manifestations are everywhere: there is art to combat climate change, collective art to solve social problems, art of denunciation, political art to reflect on the discomforts of society. What is your position around these examples?

ORG: My position is a position of individual interest, there is no right way to make art, period. I am not interested in didactic art, I am not interested in art that is reduced to a message, it is part of the problem that I have with a lot of contemporary art that focuses on illustrating an idea or a theory but in reality it closes the possibility of discovery, creation, accident, which actually imposes a vision sharply on the person who perceives it.

For me it is important that the work be free so that, as I said before, the viewer can find their own way. I distance myself from literal art, not from figuration per se because figuration continues to exist in my work, but figuration that imposes a one-eyed vision with only one point of view, that doesn’t interest me. I think that I continue to work within my own practice, finding a particular path for myself that in a certain way tries to turn it around and not follow the path of directly addressing the issues around me, but that does not mean that climate change, that the problems of society, violence, do not permeate my work, rather we must recognize that the creator does not create in a bubble but that the creator generates a work from his own reality, and reality for me in this moment is a reality that is affected by all these situations, the artist cannot escape his reality, rather he works from his perspective of how that reality affects him.cannot escape from his reality, rather he works from his perspective of how that reality affects him.

RCC:Among the concepts that accompany your work we can mention the pictorial reminiscence, the anamnesis, which you have already explained on different occasions. I want to ask you about this concept but in other spheres. For example, in a trial where witnesses have to testify, based on their memory, about a murder. Or in journalism: the witness of a piece of news must testify so that it gets published and becomes part of the stories of our society. Do your paintings ever take into account this process of reminiscence of other spheres? How does the dialogue between artistic reminiscences and those of reality work?

ORG: For me, the subject of memory or anamnesis is a way of considering memory as an imperfect but completely perfect memory, that is, memory is a true memory but it is not true as mimesis or something that represents something that actually happened, it represents something as perceived, how you felt at the time. The anamnesis as memory is actually a personal issue, my reality of what happened will never be the same reality as someone else’s, my art continues to work on that.

The memory within the formulation of my own paintings is extremely important because although I speak of being able to engage in a discourse with different historical moments and of appropriating different techniques, these techniques are not literal copies or perfect copies of how other artists did it because they pass through that memory filter, so when I see some circles in a Van Gogh sky, I translate them through my memory, thinking about how they could have been without actually making direct reference to the image or the technique or construction method of how he did it, that also happens with the dots of Liechtenstein or the lines of Japanese engraving, everything is filtered through a memory that is imperfect but completely faithful to how I perceive it. My dialogue with art, with art history, is always filtered through my own perception of it and part of what is interesting for me is traveling and collecting these memories that, although imperfect in the world of reproduction truthfulness of technique, they are completely faithful to the way I perceived them and how I am applying them in my work.

RCC: Some gallery owners and agents who work in the art market have stated that painting is one of the liveliest disciplines in terms of its economic value: during the pandemic, people continued to buy painting, perhaps like no other art object. What do you think is the reason for this phenomenon?

ORG: The privileged position of a painting within the art market has been popular for a long time and although there is a conversation of painting losing strength, the market and the interest in paintings has always been very present. I think that during the pandemic many people saw painting as a way of escaping to another space because perhaps unlike other means of formulating images, painting has something very specific, very forceful, which is that it is not a completely closed image, but rather a space that is generated and that is full of discovery opportunities because it is a document where the hand registers its own creation, its construction and being like this it is something that opens an infinite space for, when perceived it is not a limited image, something mimetic. It is not an illustration, it is not a diagram, it is something profoundly more complex, and I think that, as it has always attracted the attention of collecting and more now that people are locked up in their homes.

RCC: From your point of view, what is the moment that painting in Mexico is experiencing?

ORG: I think that we are in a very fortunate moment in Mexico where painting is recovering an energy that it had not had in perhaps 30 or 40 years. I think that the institutions, the collectors, the galleries, more than anything else, have been aiming and betting by young painters with diverse techniques, diverse ideas, diverse approaches to what a painting can be like. Painting today is as diverse as it has ever been before, we see it in the expanded field where painting is perhaps not done with pigments and color anymore, but rather in installation, or we can be completely traditional and make paintings that are wholly figurative or abstract or gestural. I believe that we live in a moment in which painting in Mexico has regained meaning because for many years we had a team of second rupture against painting that was carried out by an interest in conceptual art. I believe that fortunately the blindness that contemporary art cannot be formal has been removed and thanks to that we have begun to see that painting, like other more manual, more traditional arts, is gaining much more strength. The only thing that I think results from this diversity is that there is an effervescence in the Mexican art scene because we are no longer reducing the vision of what Mexican art or conceptual art can be, and I am tremendously grateful for that.