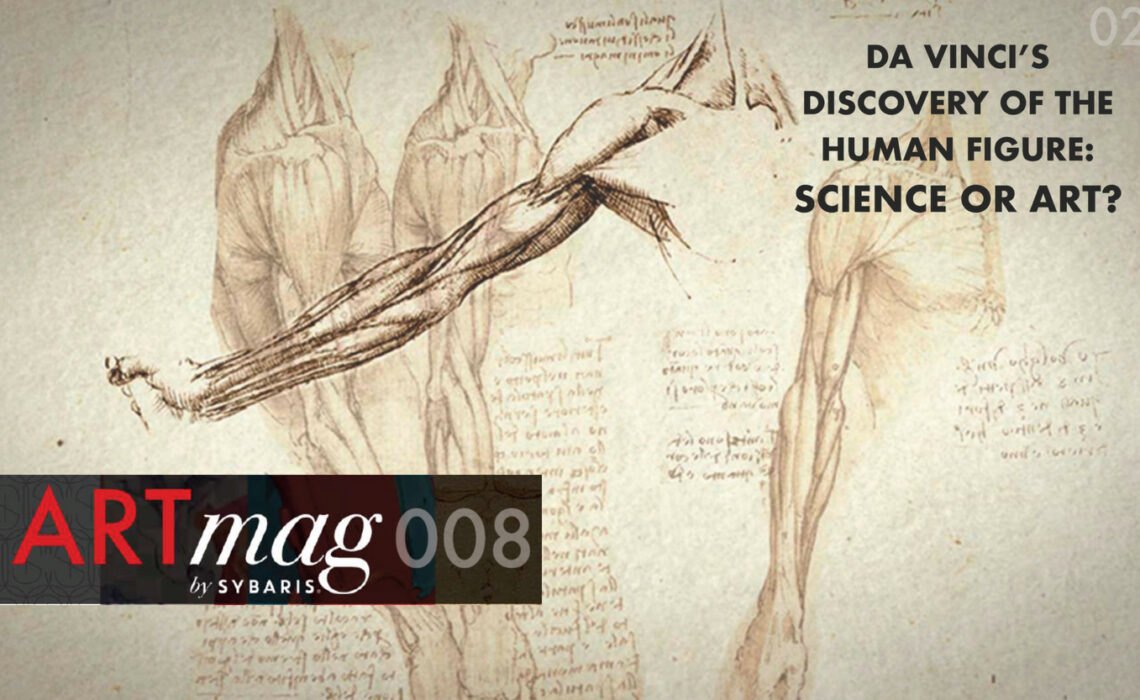 Da Vinci’s Discovery of the Human Figure: Science or Art?

“The ancients called man a lesser world, and certainly the use of this name is well bestowed, because his body is an analog for the world.” – Da Vinci

Da Vinci is most famous for being a leading Renaissance artist, but he was also a student of the human shape. He began anatomy studies in 1489 as an art apprentice under Andrea del Verrocchio, who insisted all his students study anatomy to improve their art skills, even gaining better understanding of the human figure as a subject of art. He, along with other artists of the time, studied the works of Marcus Vitruvius Pollio, a Roman army general born ca. 80, who designed and constructed machines, and also wrote about architecture. His works were discovered in the 1400s, where it became part of the inspiration which led to the Renaissance. One aspect of Vitruvius’ writings which impressed da Vinci and others in his “circle” was the analogy between man and earth, exhibited in the similar proportions of a church and that of a human figure with outstretched arms. This, perhaps, is the origin of da Vinci’s fascination and discovery of the human shape as both an inspiration of art and wonder of science. 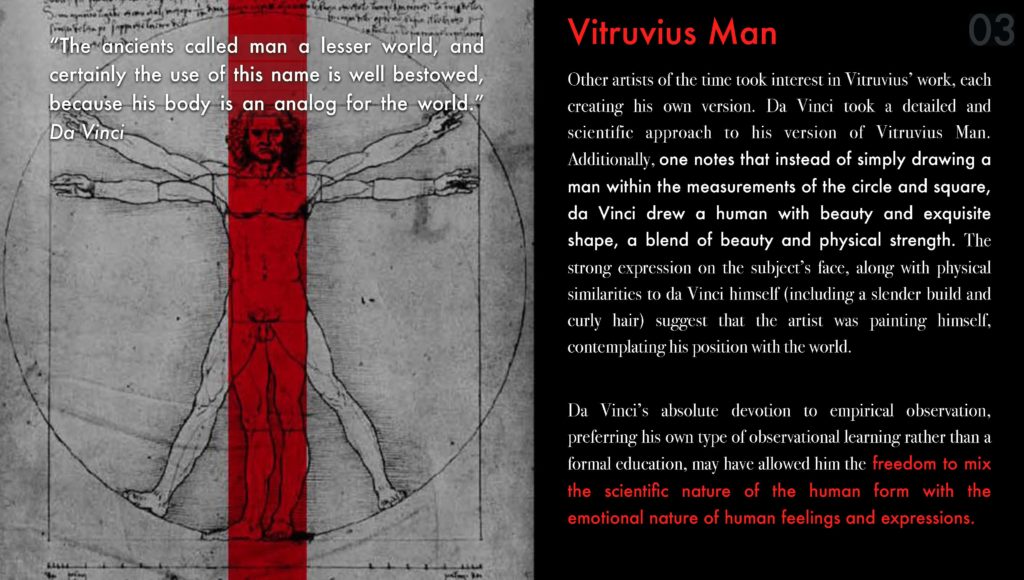 Other artists of the time took interest in Vitruvius’ work, each creating his own version. Da Vinci took a detailed and scientific approach to his version of Vitruvius Man. Additionally, one notes that instead of simply drawing a man within the measurements of the circle and square, da Vinci drew a human with beauty and exquisite shape, a blend of beauty and physical strength. The strong expression on the subject’s face, along with physical similarities to da Vinci himself (including a slender build and curly hair) suggest that the artist was painting himself, contemplating his position with the world. Da Vinci’s absolute devotion to empirical observation, preferring his own type of observational learning rather than a formal education, may have allowed him the freedom to mix the scientific nature of the human form with the emotional nature of human feelings and expressions.

When focusing on da Vinci’s paintings, the viewer sees less of the subject as a human figure and more of the subject as a human. Through his works, the expression, emotions, and even the feelings of the subject show through in amazing detail. The same detail which revealed such revelations as the four chambers of the human heart or the existence of the vascular system, with descending blood vessels, exposed emotions of the Mona Lisa and Salvator Mundi. The connection between art and science enabled da Vinci to balance the two worlds, which seem so far away in modern times, but were not considered as such in his time. Da Vinci used simple analogies to connect human and animal characteristics with those of the earth, which helped him to balance the artistic and scientific mindsets just as he questioned how psychological emotions led to physical motions, and some of the most basic “whys” of bodily movement and mechanics. 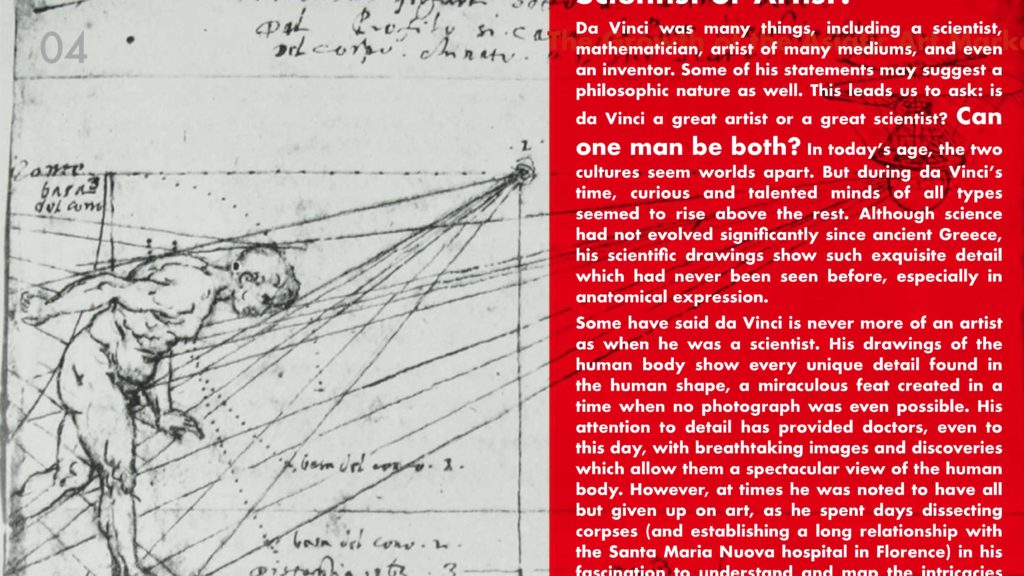 Da Vinci was many things, including a scientist, mathematician, artist of many mediums, and even an inventor. Some of his statements may suggest a philosophic nature as well. This leads us to ask: is da Vinci a great artist or a great scientist? Can one man be both? In today’s age, the two cultures seem worlds apart. But during da Vinci’s time, curious and talented minds of all types seemed to rise above the rest. Although science had not evolved significantly since ancient Greece, his scientific drawings show such exquisite detail which had never been seen before, especially in anatomical expression.

Some have said da Vinci is never more of an artist as when he was a scientist. His drawings of the human body show every unique detail found in the human shape, a miraculous feat created in a time when no photograph was even possible. His attention to detail has provided doctors, even to this day, with breathtaking images and discoveries which allow them a spectacular view of the human body. However, at times he was noted to have all but given up on art, as he spent days dissecting corpses (and establishing a long relationship with the Santa Maria Nuova hospital in Florence) in his fascination to understand and map the intricacies of the human body. 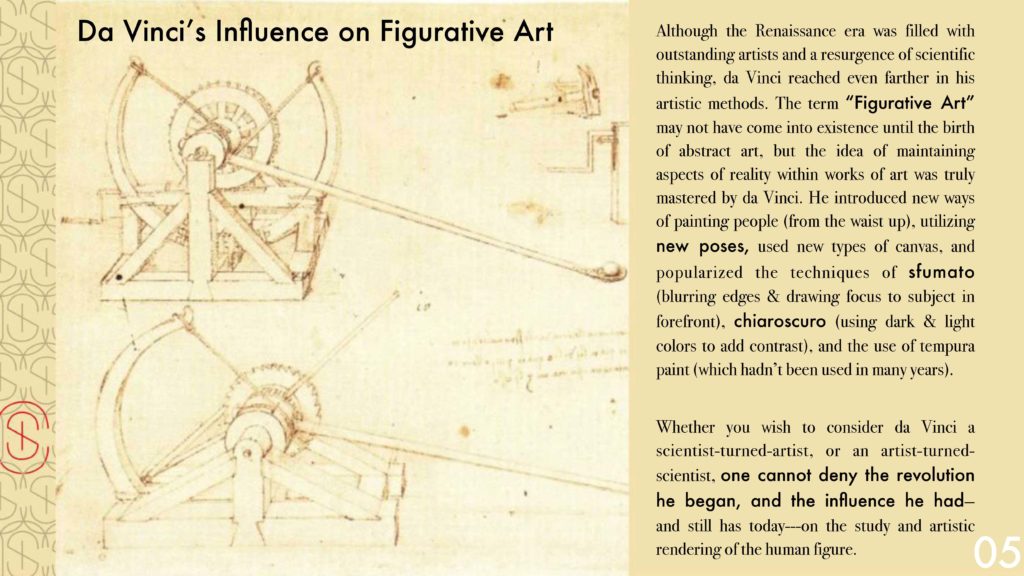 Although the Renaissance era was filled with outstanding artists and a resurgence of scientific thinking, da Vinci reached even farther in his artistic methods. The term “Figurative Art” may not have come into existence until the birth of abstract art, but the idea of maintaining aspects of reality within works of art was truly mastered by da Vinci. He introduced new ways of painting people (from the waist up), utilizing new poses, used new types of canvas, and popularized the techniques of sfumato (blurring edges & drawing focus to subject in forefront), chiaroscuro (using dark & light colors to add contrast), and the use of tempura paint (which hadn’t been used in many years).

Whether you wish to consider da Vinci a scientist-turned-artist, or an artist-turned-scientist, one cannot deny the revolution he began, and the influence he had—and still has today—on the study and artistic rendering of the human figure.