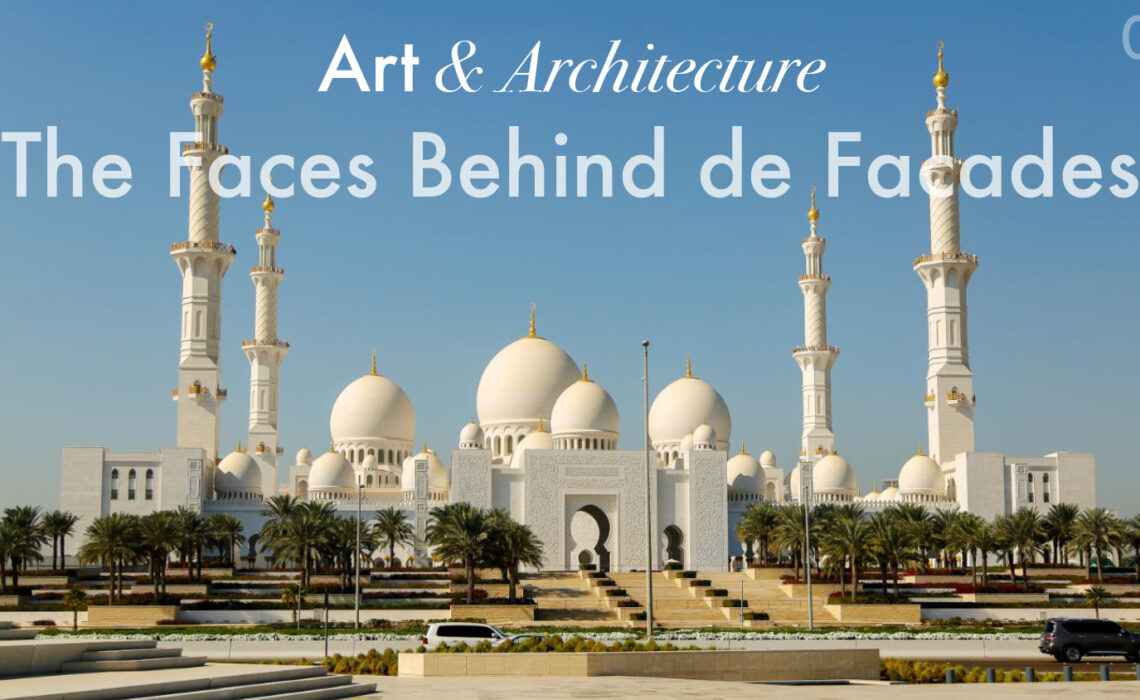 The project known as the “Cultural District of Saadiyat Island” is a lofty plan to bring a jewel of art and heritage in this oil-rich, desert country. Designed to create in Abu Dhabi a mecca of art and culture unparalleled anywhere else in the middle east, this collection of museums and a performing arts complex will draw tourists and art appreciators worldwide.

The individual projects are outstanding and their architects are masters in their own right, but together represent a new future for Abu Dhabi and the UAE, which previously had only a collection of crumbling mid-20th century buildings, and represented a blank slate for development.

The Faces behind the Saadiyat Structures:

The UAE Pavilion project, carried out by the architectural firm Foster + Partners for the Shanghai Expo 2010, was inspired by the desert dunes of the United Arab Emirates. The project aims to represent the scenario and desert climate of the territory through avant-garde building techniques, and to move the landscape itself to the architecture of the pavilion. The space of the pavilion takes the shape of a canyon, delineated by partitions and curvilinear walls. The construction evokes the narrow pedestrian alleyways of the cities of the Arabian Peninsula, characterized by an urban structure that can boast of natural energy efficiency. However, it is inspired by the soft and sinuous shapes of the desert. Since 2011 the pavilion has become a centerpiece of the Abu Dhabi annual art fair, which presents a selection of new gallery owners each November. 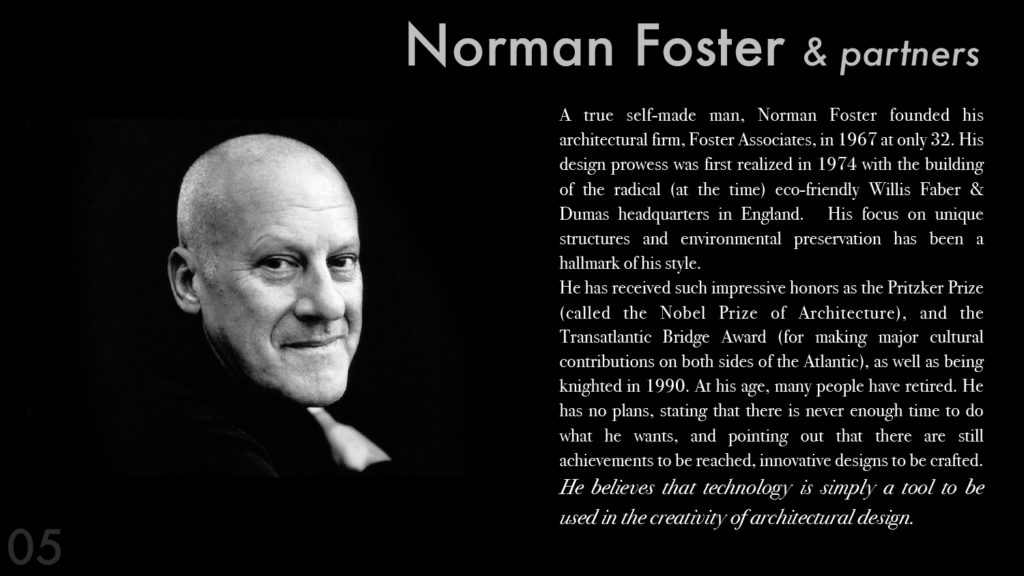 A true self-made man, Norman Foster founded his architectural firm, Foster Associates, in 1967 at only 32. His design prowess was first realized in 1974 with the building of the radical (at the time) eco-friendly Willis Faber & Dumas headquarters in England.  His focus on unique structures and environmental preservation has been a hallmark of his style.

He has received such impressive honors as the Pritzker Prize (called the Nobel Prize of Architecture), and the Transatlantic Bridge Award (for making major cultural contributions on both sides of the Atlantic), as well as being knighted in 1990. At his age, many people have retired. He has no plans, stating that there is never enough time to do what he wants, and pointing out that there are still achievements to be reached, innovative designs to be crafted. He believes that technology is simply a tool to be used in the creativity of architectural design.

This museum was planned as a memorial to the late Sheikh Zayed bin Sultan Al Nahyan, the founding president of the UAE. Inspired by the dynamics of flight and the feathers of a hawk, its design reflects the Sheikh’s passion for the art of falconry, and thus creates an iconic symbol of the nation. With an avant-garde design in terms of materials and construction methods, each of the steel towers contain a gallery space where visitors can explore the history and culture of the United Arab Emirates. The building is designed with sustainability in mind, to enhance energy savings, using ventilation and natural lighting in the towers, and applying photovoltaic panels and thermal exchange technologies.

The architectural firm established by Norman Foster (see above), Foster + Partners has created bridges, government and cultural buildings, structures for sports, transportation, office buildings, and higher education facilities. The firm has won over 470 awards spanning 15 years, and the team of over 100 architects are world renown for sustainable architecture. Gathering a team of successful architects, Foster set out to create a building which integrates technology with the unique heritage and tradition of Arabic culture.

The Guggenheim in Abu Dhabi, inspired by a cubist painting, has been designed by the Gehry Partners architectural studio. It invokes the greatest works of art in the collections belonging to the Guggenheim Foundation. Designed to be almost surrounded by water, visitors will enjoy a spectacular view of the Cultural District of Saadiyat and the Persian Gulf. Open to the elements (the cones of the museum recall the ancient wind towers of the region, used both to ventilate and to create shade in the exterior patios), the project is a mixture of Arab tradition and modern design. The galleries will be distributed around the central atrium on four floors that will be connected by glass bridges. The museum will have 13,000 square meters of central exhibition space and 18,000 in the spectacular cones, as well as housing a theater for 350 spectators, laboratories and classrooms, shops, several cafes and a restaurant. 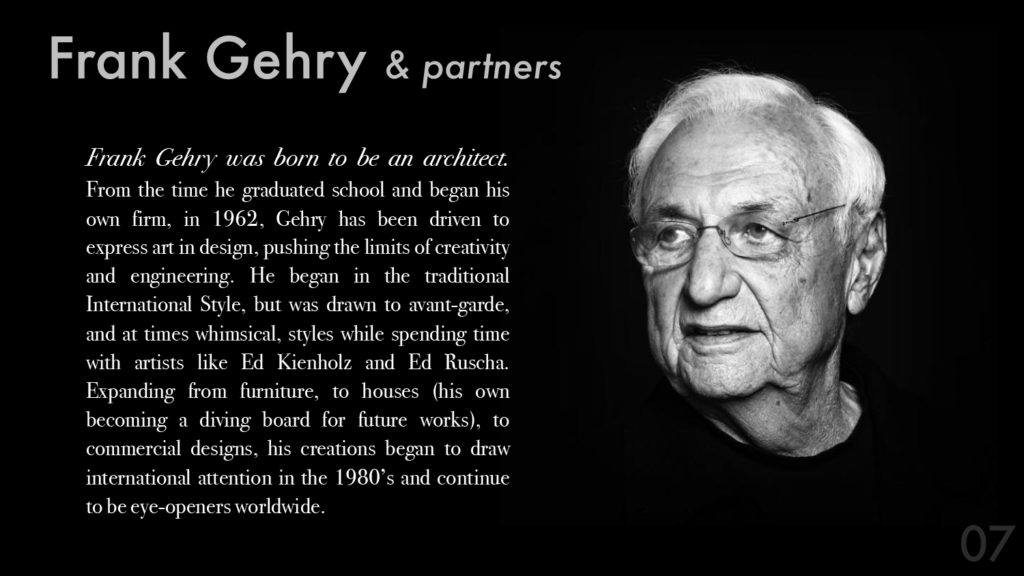 Frank Gehry was born to be an architect. From the time he graduated school and began his own firm, in 1962, Gehry has been driven to express art in design, pushing the limits of creativity and engineering. He began in the traditional International Style, but was drawn to avant-garde, and at times whimsical, styles while spending time with artists like Ed Kienholz and Ed Ruscha. Expanding from furniture, to houses (his own becoming a diving board for future works), to commercial designs, his creations began to draw international attention in the 1980’s and continue to be eye-openers worldwide.

Built between 2008 and 2010, the Sheikh Zayed bridge has been defined as the “most complicated bridge that has ever been built“, because of its futuristic architecture. The 800-meter bridge presents forms of continuous arcs that recall the dunes of the desert. The center lane is illuminated with light games full of dynamism that bring even more movement to the whole construction. It is the third temporary in-line bridge connecting the peninsula with the island on which Abu Dhabi stands, thus enabling it to pass over the Maqtah channel. 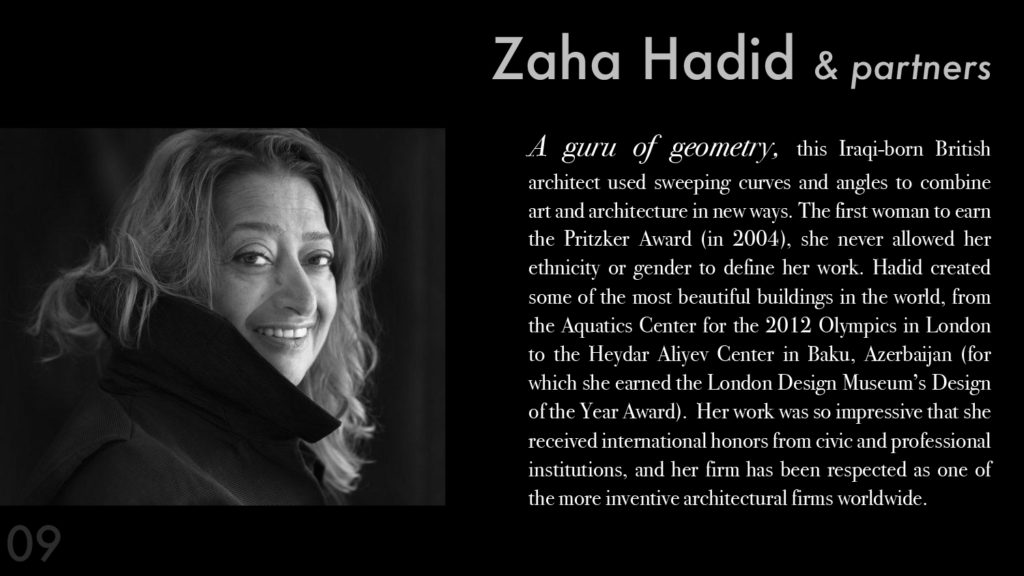 A guru of geometry, this Iraqi-born British architect used sweeping curves and angles to combine art and architecture in new ways. The first woman to earn the Pritzker Award (in 2004), she never allowed her ethnicity or gender to define her work. Hadid created some of the most beautiful buildings in the world, from the Aquatics Center for the 2012 Olympics in London to the Heydar Aliyev Center in Baku, Azerbaijan (for which she earned the London Design Museum’s Design of the Year Award).  Her work was so impressive that she received international honors from civic and professional institutions, and her firm has been respected as one of the more inventive architectural firms worldwide.

The Marvels Whom Stand Behind the Buildings

When one ponders the depth and beauty of the Cultural District project in Abu Dhabi, the beauty and creativity of these buildings and their architects must be considered. Each of them is a master in his (or her) own right, and the works represented are just another shining example of their artistry and engineering proficiency.