When considering types of modern art techniques, etching (as a method of printmaking) is often overlooked. Even within the range of etching techniques, Aquatint is a rare find. However, it is simply a beautiful expression of tones using materials more common in a scientific lab than in an artist’s workshop.

Originally created by printmaker Jan van de Velde around 1650 in Amsterdam, it never took hold until rediscovered in 1768 by printmaker Jean-Baptiste Le Prince. It was found to be a less physically strenuous method than mezzotint, where the surface copper or steel plates were marked with a dense network of lines, made with a ragged steel instrument, called a rocker. Then the places where the impression would be like untouched by paint, were polished. This was a difficult way of printing, albeit a successful method for reproducing paintings, as the resulting artwork looks remarkably like the original watercolors they were duplicating. It remained popular until the mid-1830’s, when the (cheaper) lithograph became king. 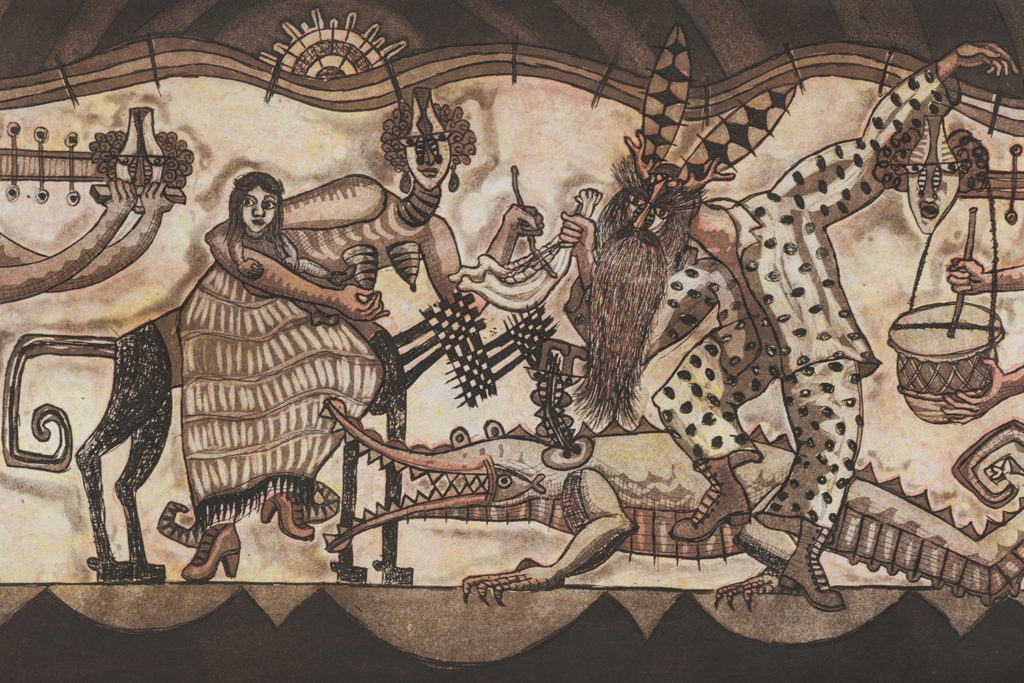 Aquatinting is a form of Intaglio, a subform of printmaking. Intaglio is the general term for those printmaking techniques that rely upon the creation of an image by carving a metal plate. Ink is then pushed into the grooves created in the plate and the plate is wiped clean, put on a press bed with dampened paper (or even fabric) on top of it. The plate is then run through the press under pressure and the ink in the grooves is drawn on to the paper creating the print. Other intaglio techniques are engraving, etching, drypoint, aquatint, and mezzotint.

In aquatinting, a resin is sprinkled on the plate, then heated up to bond together. When bathed in a bath of nitric acid, the acid removes all the metal where the resin does not appear, resulting in black ink around white spaces. To create the large variety of tones aquatint is famous for, the process is repeated, which intensifies the images, and then etched. With each repetition, more tonal varieties appear, depending on the strength of the acid and length of time the plate is submerged.

Although aquatint became fashionable in the late 1700’s and early 1800’s as a reproductive method, some artists were particularly skilled in the technique. One of the more famous artists using aquatint was Francisco de Goya, whose plates depicting bullfighting (La Tauromaquia) are well-known. This technique is especially well-suited for dark and light contrasts due to the intensity. Our featured artist, Ixrael Montes, is one current artist utilizing the aquatint technique. His playful use of animals and landscapes reminds viewers of the beauty and folly found in everyday life. Using a complex combination of images, his palette is filled with activity, engaging audiences to discover a story found within. View more of his unique pieces using this technique in the Chimeras of a Fisherman Collection.