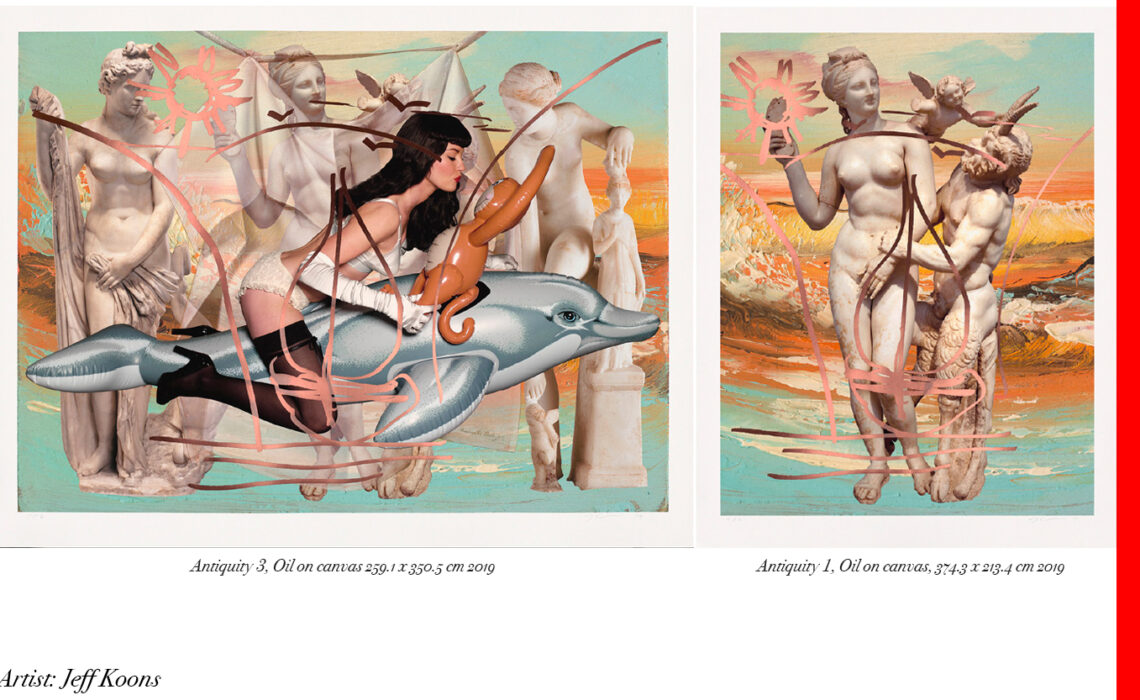 When we face a work by Jeff Koons we have two alternatives: to relate its motives to the history of art or to be seduced by its contemporary presence. Antiquitysynthesizes both positions. The series that began in 2018 mixes images from different eras: prehistoric and Greco-Roman deities, 19th-century figures or women of the 20th century (Gretchen Mol dressed as the icon of the 50 Betty Page in Antiquity3) achieving a syncretism that recalls at the same time Dalí’s surrealism and the American advertising silhouettes of the 60s. As Koons mentioned: “I’ve always loved Surrealism and Dada and Pop, so I just follow my interests and focus on them.” 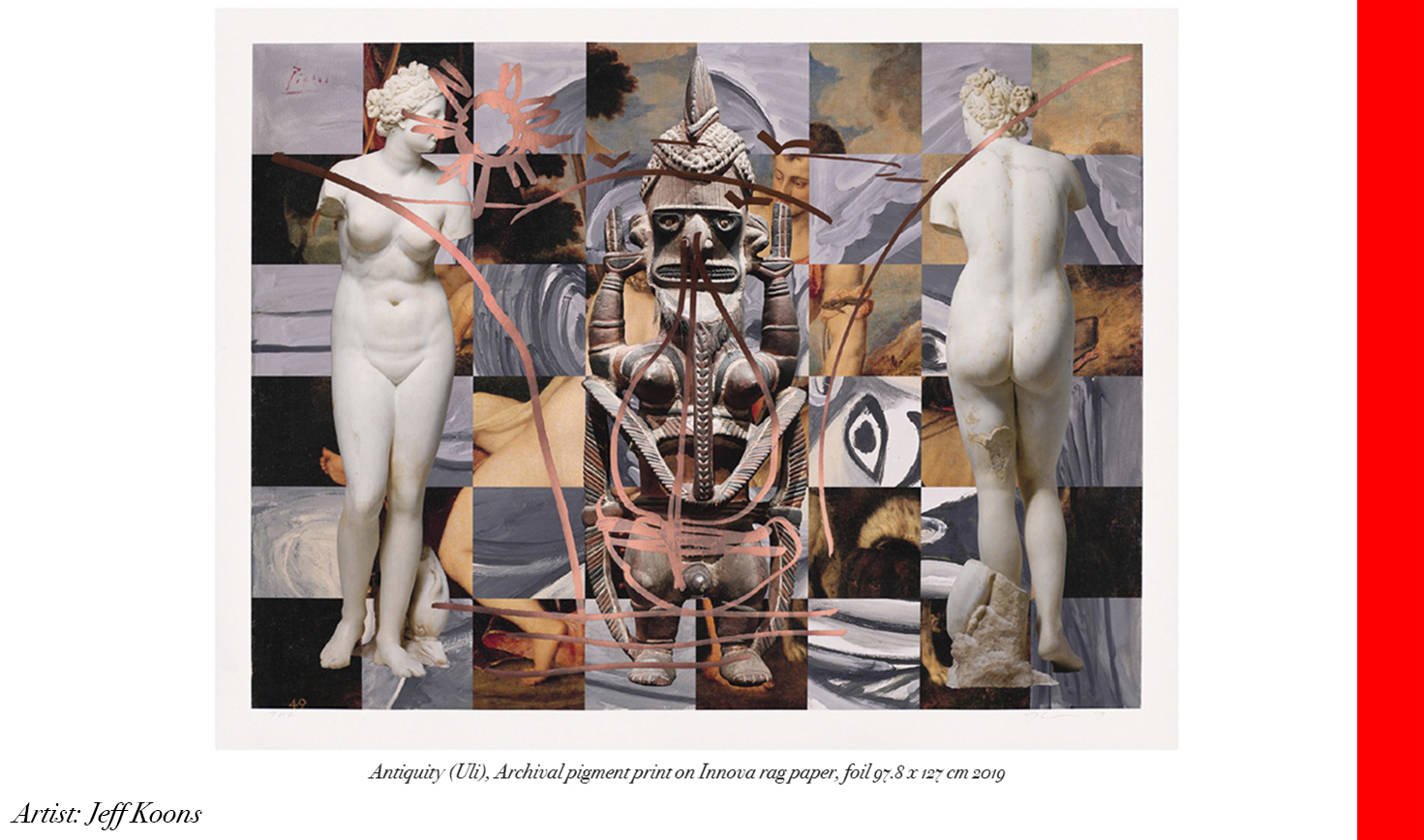 On the surface, a series of casual strokes recall Dalí’s originality and eroticism, as well as the innocence of a child who discovers a painting, observes it carefully and prepares to tear it apart. Or to remake it to appropriate it. In a 2011 interview by Pharrell Williams for Harper’s Bazaar Koons underlines the following:“I start with a sense of contemporary time and make references to different artists such as Lichtenstein or Dalí through to Manet, Renaissance artists, or the greatest artists of antiquity, like Praxiteles and Apelles. The aspect is the acceptance of how we exist, how nature procreates, and how we are able to sustain life.” 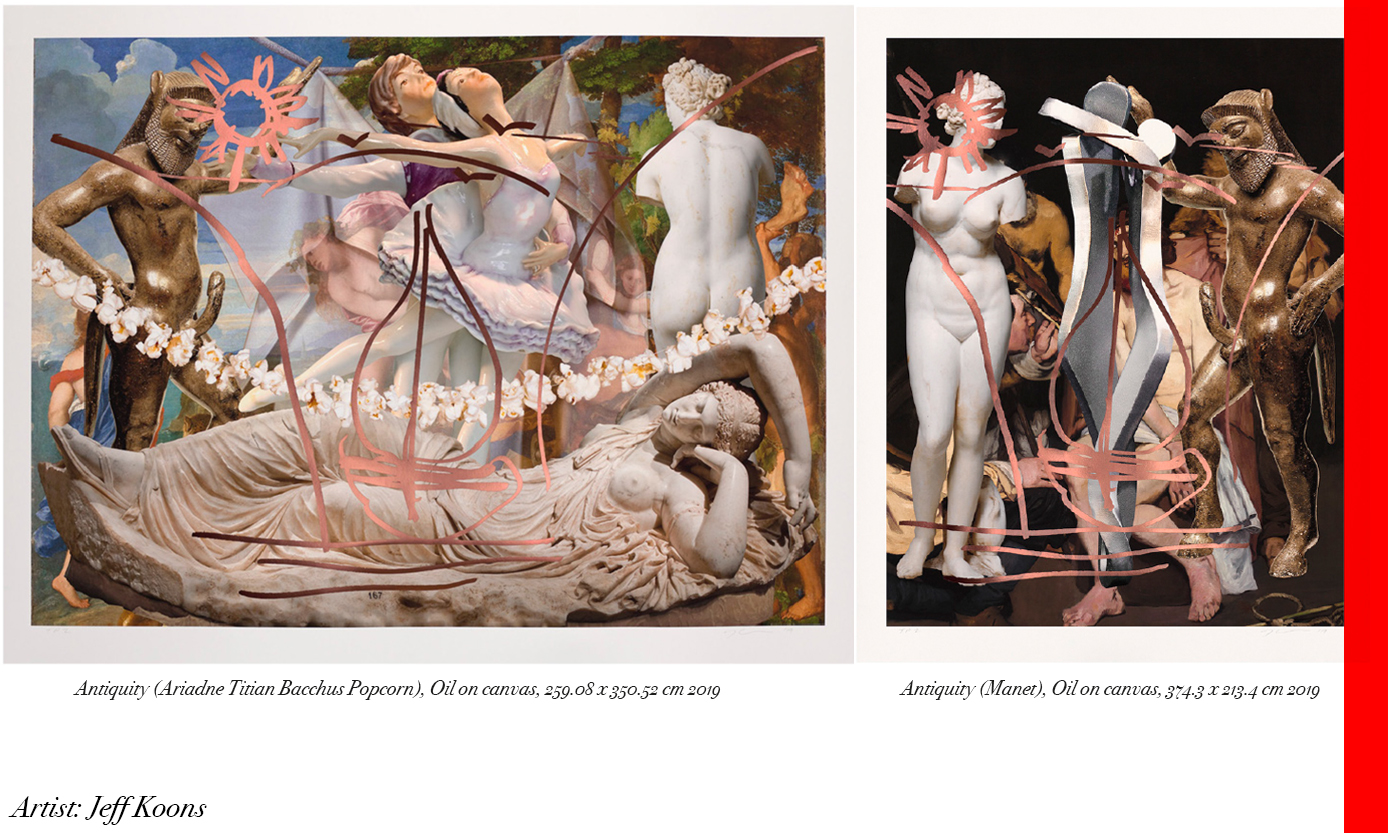 In a text around this series Joachim Pissarro mentions that“These works, conceived by Koons and executed with the help of studio assistants, echo the very tightly, digitally composed collage-based technique Koons employed in his Easyfun-Ethereal works and subsequently developed in his Popeye and Hulk Elvis paintings. In the compositions for Antiquity, he incorporates the same motifs throughout multiple works, producing a sense of visual rime across the series. Some of the works share an Old Master painting as their background: Rubens’s Daughters of Leucippus and Manet’s Jesus Mocked by Soldiers are two examples. The outermost layer of all the Antiquity works is a childlike drawing of a sailboat, rendered in a simulated Magic Marker—and this is Koons’s magic (or alchemy): he transforms a doodle into a most exacting, precise, and painstakingly rendered painterly gesture—indeed, accumulations of painterly gestures. Or, vice versa, he presides over myriads of pictorial and pain-laden gestures in order to turn them into the illusion of a mark made by a felt-tip pen. The fascinating power of Koons’ paintings, here, is that they constantly oscillate between the two.”

Can this series of works that make up Antiquitybe owned separately? Could they increase their value if they are part of the same collection? It is undeniable that any work signed by the American artist aspires to position itself as a benchmark of contemporary art. The value that each of them possesses not only fuses the artistic interests of Koons, but also strengthen them to create a visually shocking ensemble.