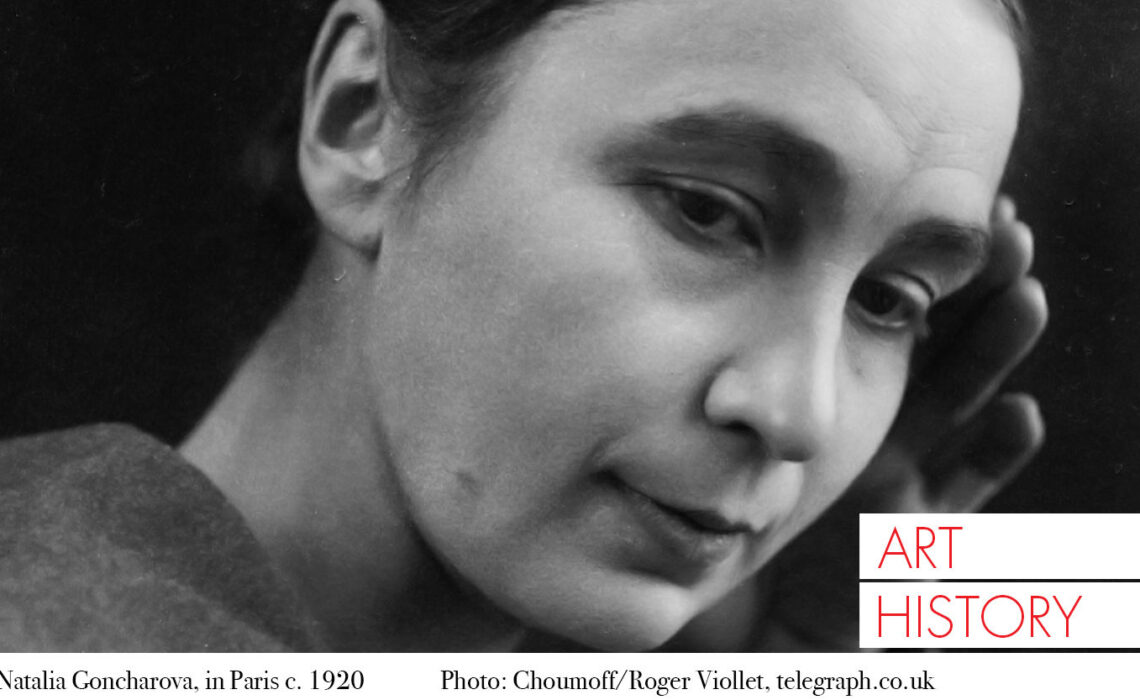 Acclaimed for being one of the most representative women artists of the Russian avant-garde, Goncharova studied sculpture and architecture.

However, critics recognize her as one of the most important painters of the early 20th century: together with her husband Mikhail Larionov and other artists such as Malevich and Tatlin, she founded the first Russian avant-garde, Rayonism, in 1913, a kind of mixture of aesthetic interests between cubism and Italian futurism. A twist in art to leave behind the representation of reality and look towards abstraction. Here we choose 5 moments to get closer to her life and work. 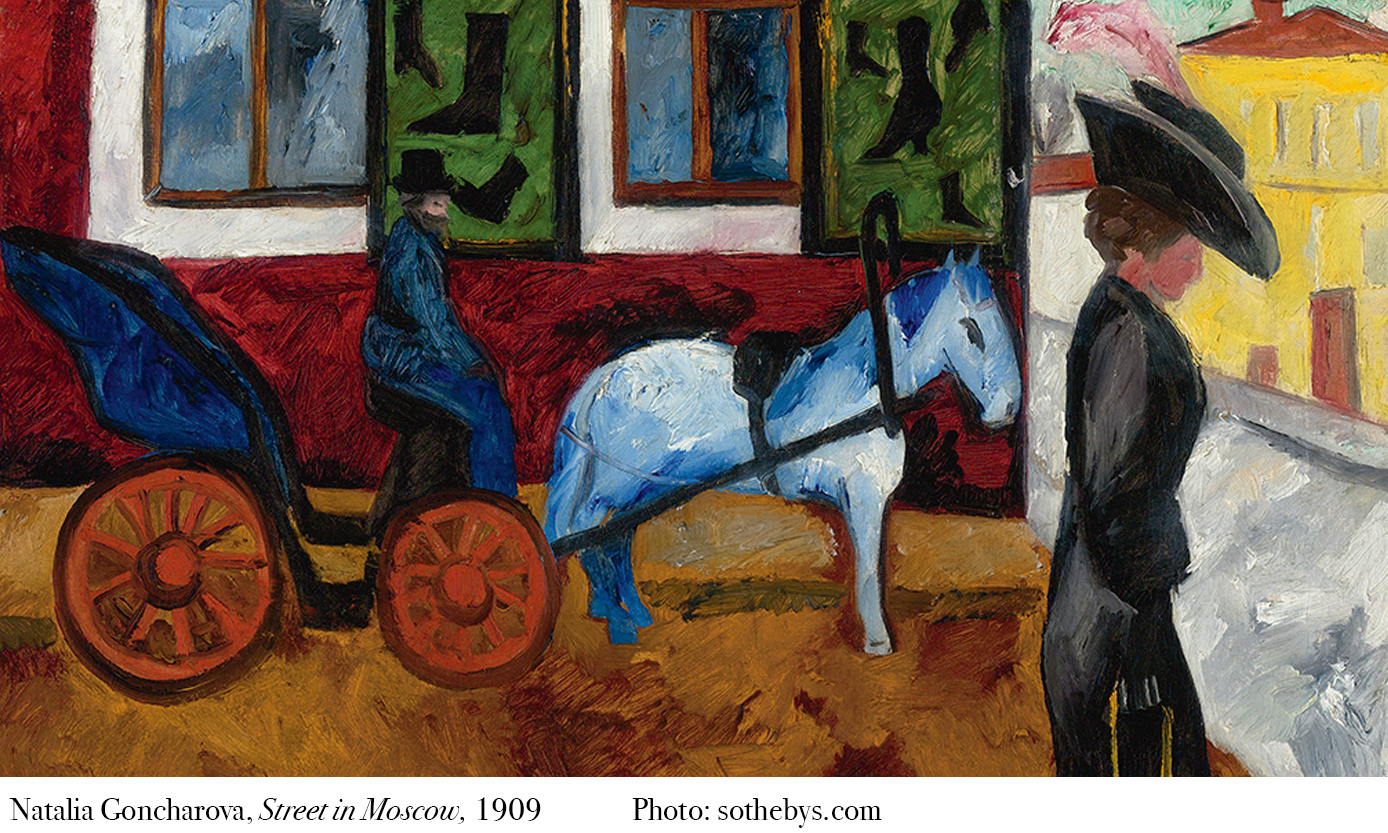 1) Natalia Sergeevna Goncharova was born on July 3, 1881, in Tula, Russia. She developed her work in painting, sculpture and architecture. In addition to that, she was a designer and set designer. She collaborated in the production of an illustrated book and designed some ballet costumes in Geneva. During her stay in Paris (1921) she designed dresses and embroidery inspired by the world of ballet. The Russian artist is known for her pictorial work but also made montages for Sergei Diaghilev. In the current art market, her works keep a high price. Just in 2011, her Street in Moscow (1909) was sold at Sotheby’s for 6,354,500 dollars while Bluebells (1909) was sold for 3,044,500 euros in 2007. 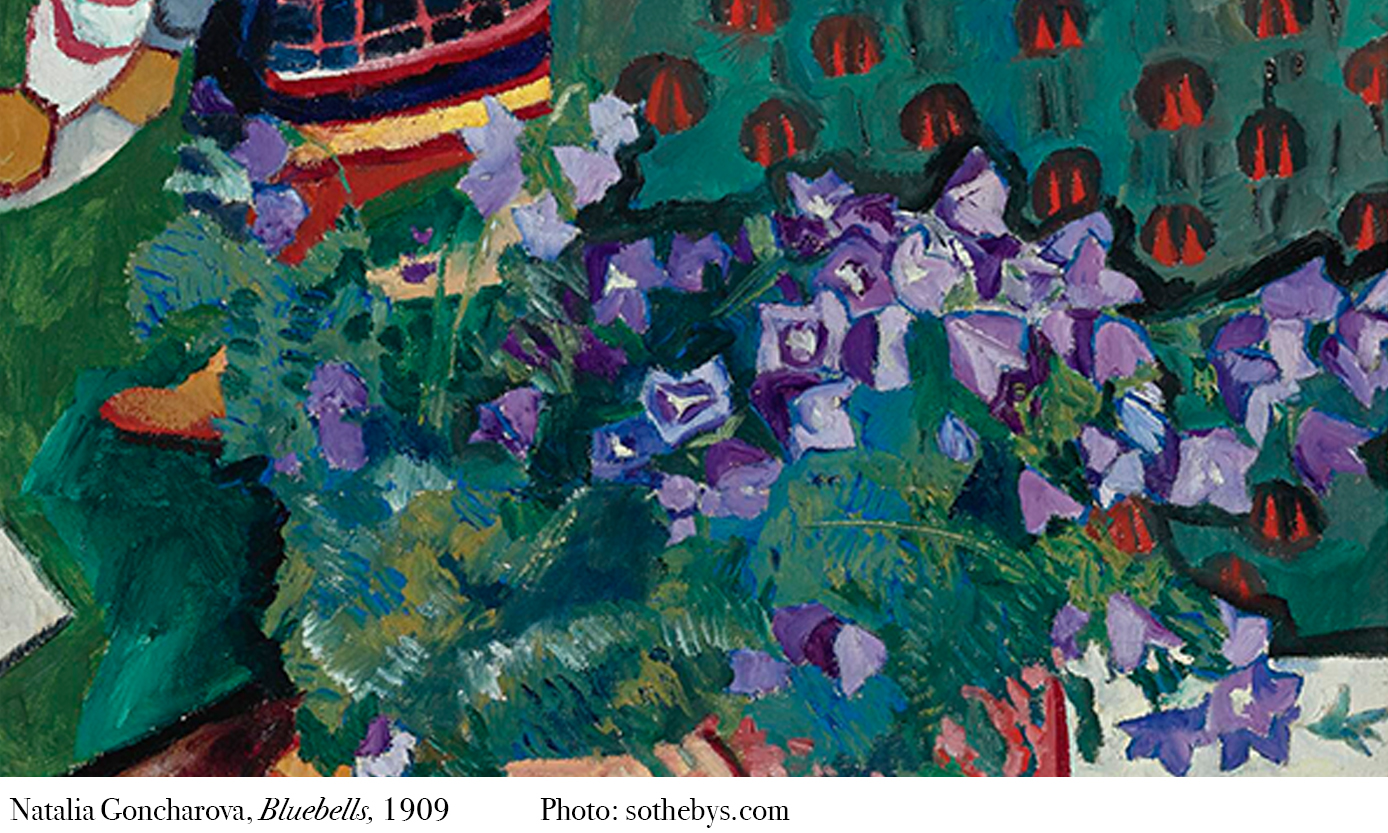 2) Daughter of an artist father – Sergei Goncharov – and educated from a young age in the art world, she studied at the Moscow School of Painting, Sculpture and Architecture. During her first creative stage, her works showed hints of cubism and futurism. At the end of her studies she looked for her own style and formed the group Jack of Diamonds. Her first exercises were not without controversy. In 1910 she released her exposed nudes, which led to the closure of the exhibition where they were presented. 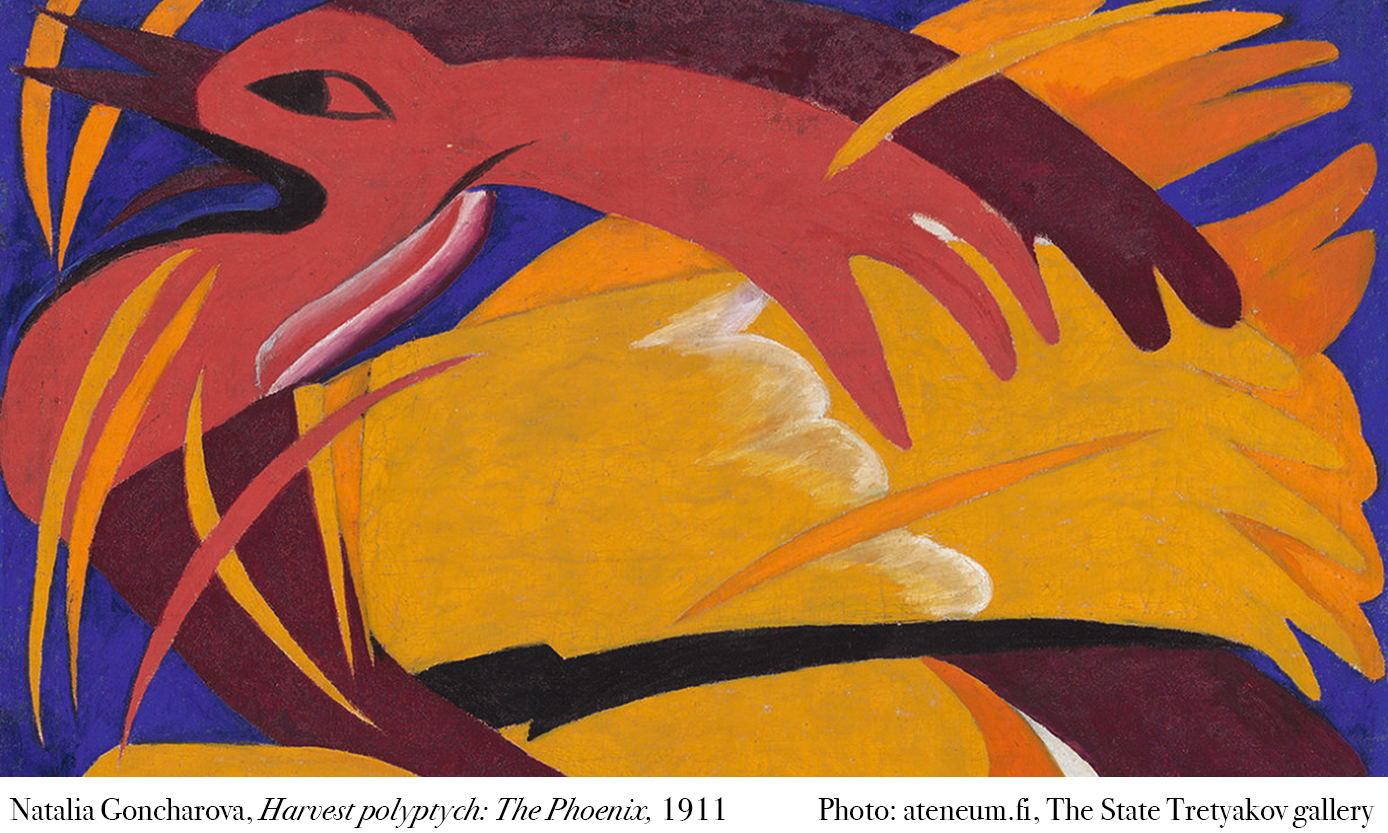 3) Although the Jack of Diamonds project did not go as she expected, Goncharova persisted in her belief in creating avant-garde Russian art. In 1912 she released Donkey’s Tail, an exhibition in which artists such as Malevich joined. She also participated in the Der Blaue Reiter collective, along with artists such as Kandinsky. Among her most risky and appreciated pieces we can mention Cats (Rayonist Perception in ink, black and yellow), Electric Lamp (1913), (Rayonist composition, ca. 1912-1913), Peasants Picking Apples (1911), the polyptych Harvest (1911) and the work she did as a designer for Sergei Diáguilev’s Russian Ballets from Le Coq d’or (1914) to 1929, when Diaguilev died. 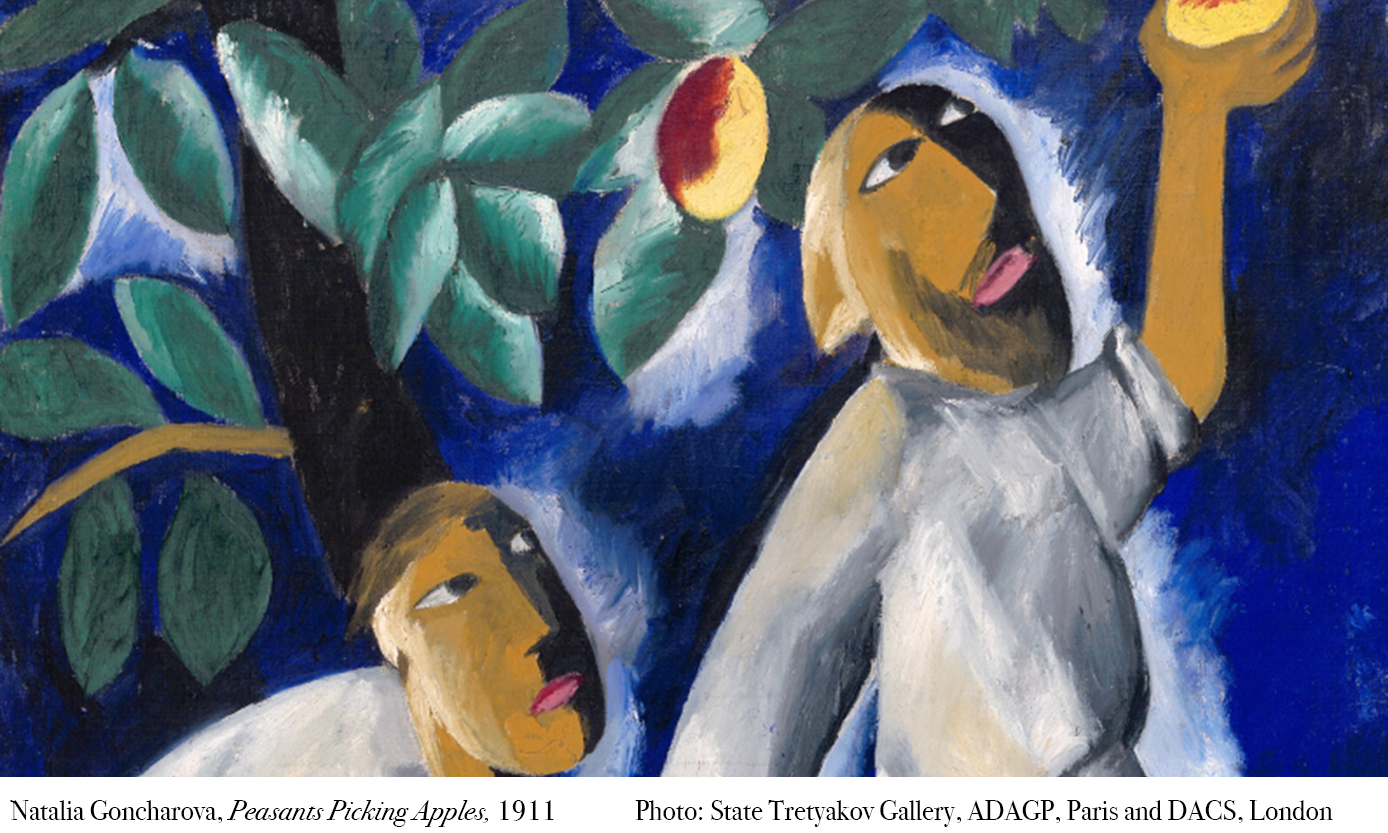 4) Goncharova is one of collectors’ favorite artists. Peasants Picking Apples (1911) was recognized as one of the most expensive works by a woman. According to Christie’s its price ranges from GBP 1,000,000 – to GBP 1,500,000. In 2019 Tate Modern held a retrospective in her honor. This exhibition featured 160 works on loan from the State Tretyakov Gallery in Moscow.

5) The characteristic that differentiated Natalia Goncharova from other artists of the moment was her virtue for innovating and creating far from prejudice, entering new techniques and changing styles. Months before her death, the Arts Council in London organized an exhibition to show the artist’s importance in 20th century Russian and European art. Most of her work was inspired by the landscapes and objects that surrounded her during her childhood. Goncharova grew up in a noble family of landowners and textile manufacturers.