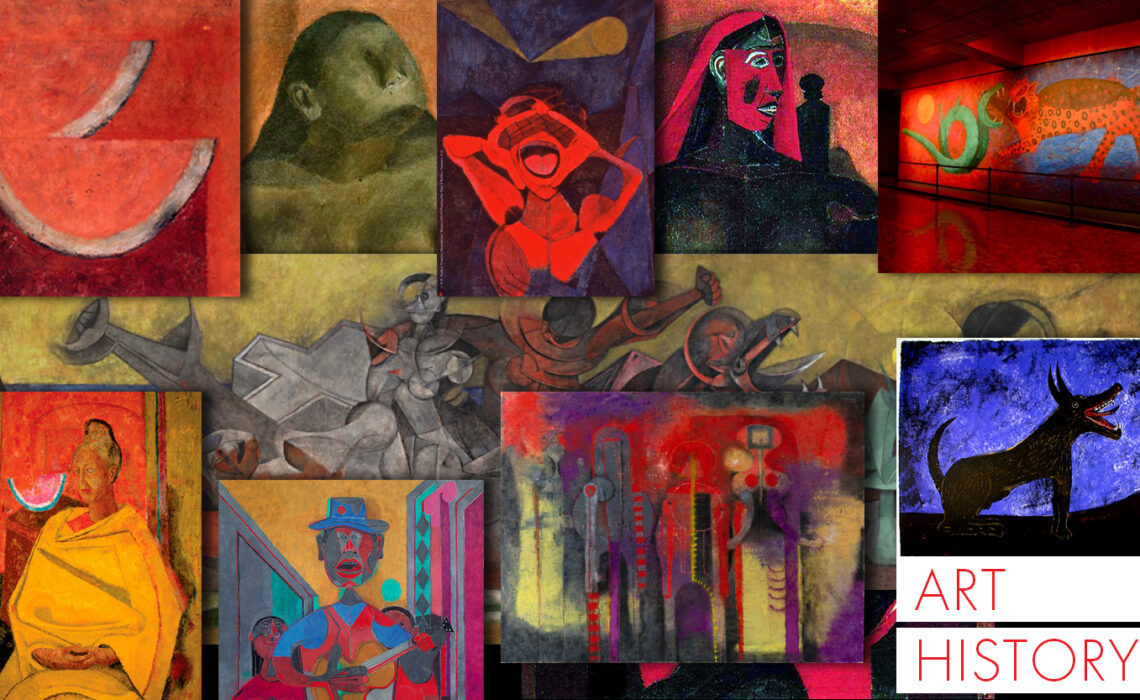 Rufino del Carmen Arellanes Tamayo is one of the most notable Mexican artists of the 20th century. Originally from Oaxaca de Juárez, his paintings show urban scenes, nature and local environments. Because of his use of color and technique he is considered one of the leading artists in the history of painting in Mexico. Today we remember his death anniversary with 10 of his most emblematic works.

Since he was a child, Rufino (Oaxaca de Juárez, 1899 – Mexico City, 1991) was inspired by the women who accompanied him: Clementina and Amelia Tamayo. The separation from his parents meant an important moment for his figure as an artist. In fact, he appropriated his mother’s surname and forgot his father’s. He studied accounting in Mexico City in order to manage the family’s fruit business. But a little later, he decided to change course and began his artistic training at the Academy of San Carlos. Today his artistic legacy includes 1,300 oil paintings, 20 portraits, 452 graphic pieces, 358 drawings, 21 murals, 20 sculptures and one stained glass window. 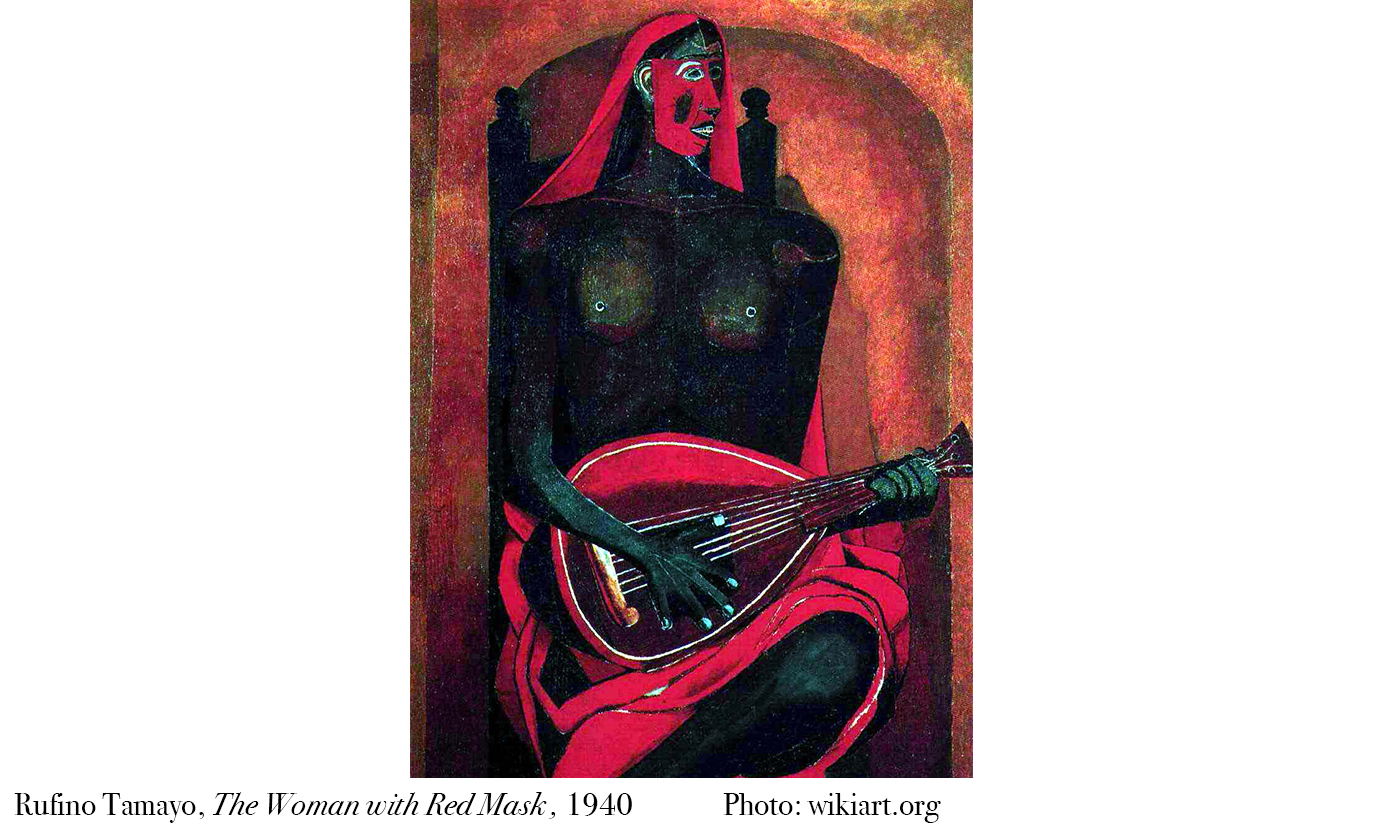 Tamayo’s style is indecipherable. His work reviews trends such as cubism and abstract art. The result: mixography. Influenced by popular art and pre-Hispanic figures, his murals were a great shock to both the public and critics. His artistic career began with an exhibition at the Art Center (New York), he also taught at the Dalton School of Art (New York). 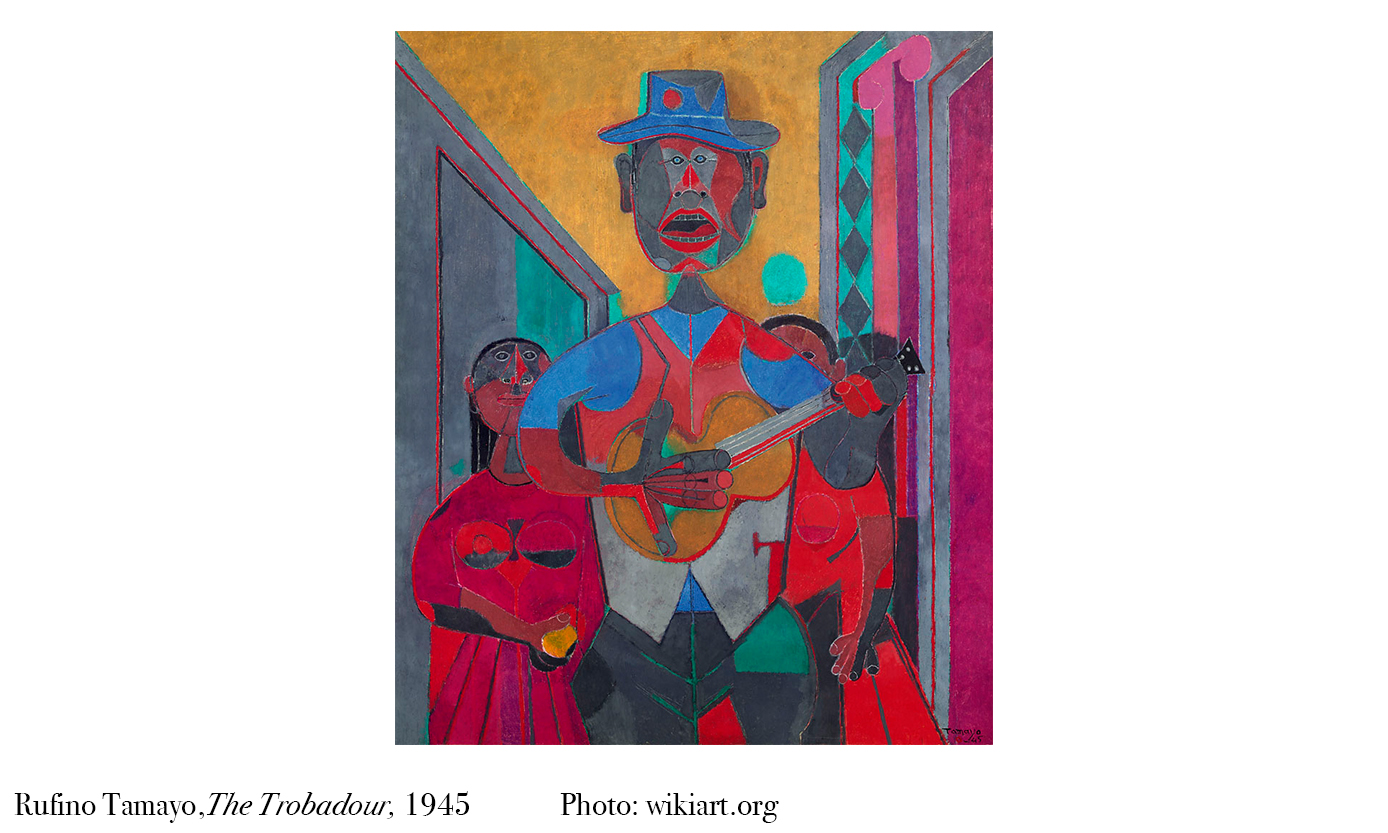 Some of Tamayo’s most important works can be found in the Museo Soumaya (Mexico City), in a UNESCO building (Paris) and in the Palacio de Bellas Artes (Mexico City). His work was acquired by banks, galleries, businessmen and institutions all over the world. The Trobadour was auctioned by Christie’s in 2008 for $7.2 million. 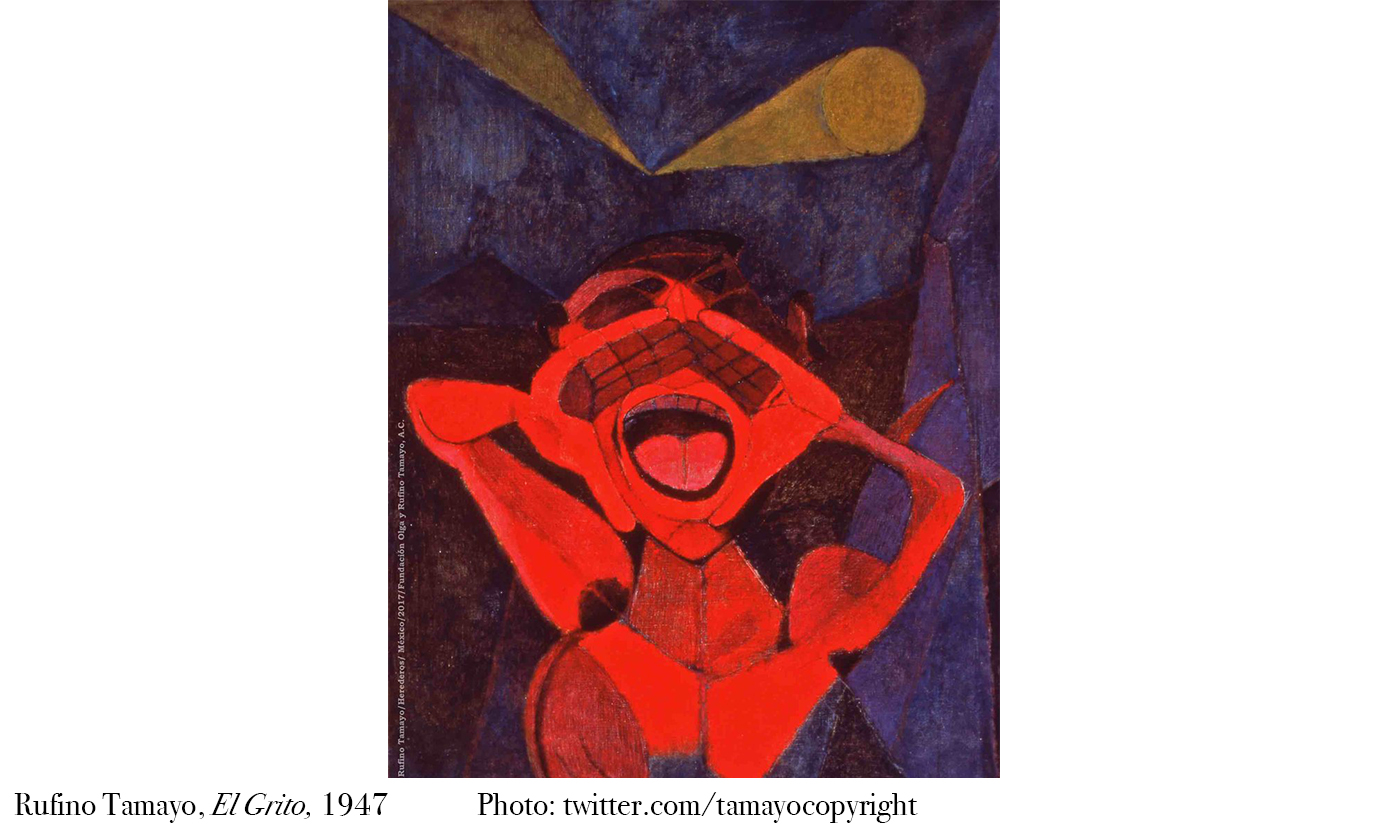 Tamayo was part of one of the most important generations of art in Mexico, alongside Diego Rivera, David Alfaro Siqueiros and José Clemente Orozco. El grito is a wink to the Norwegian painter and engraver Edvard Munch (Adal Brusk, 1864 – Oslo, 1944): a Mexican jewel stranded abroad that can be admired in the National Gallery of Modern Art (Rome). 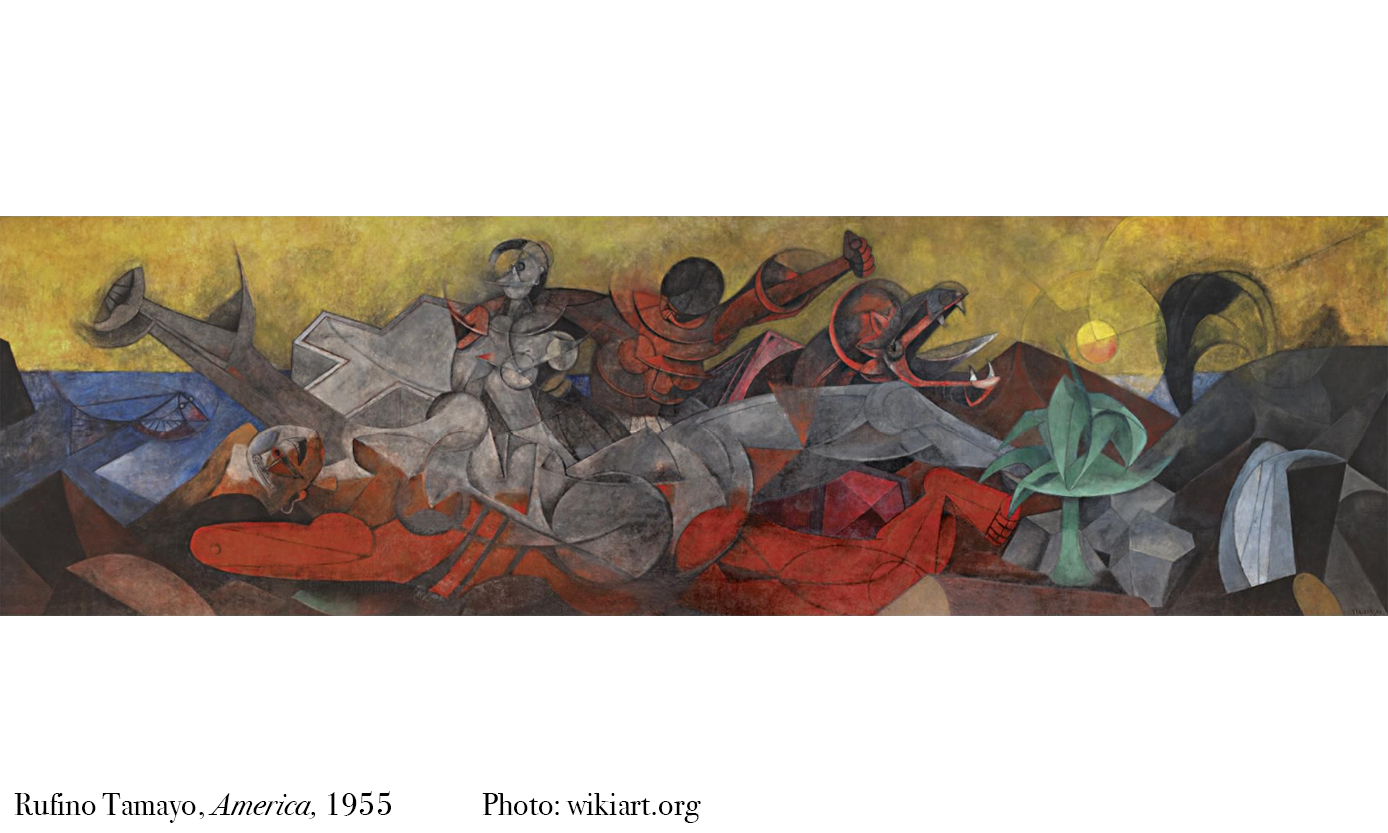 During the 1950s, the artist toured Paris to join the post-war cultural movement. There he participated in the 25th Venice Biennale (Venice). Interested in merging art with politics, in 1955 he presented America, his closest work to muralism, in which he shows us his perspective of the Second World War. 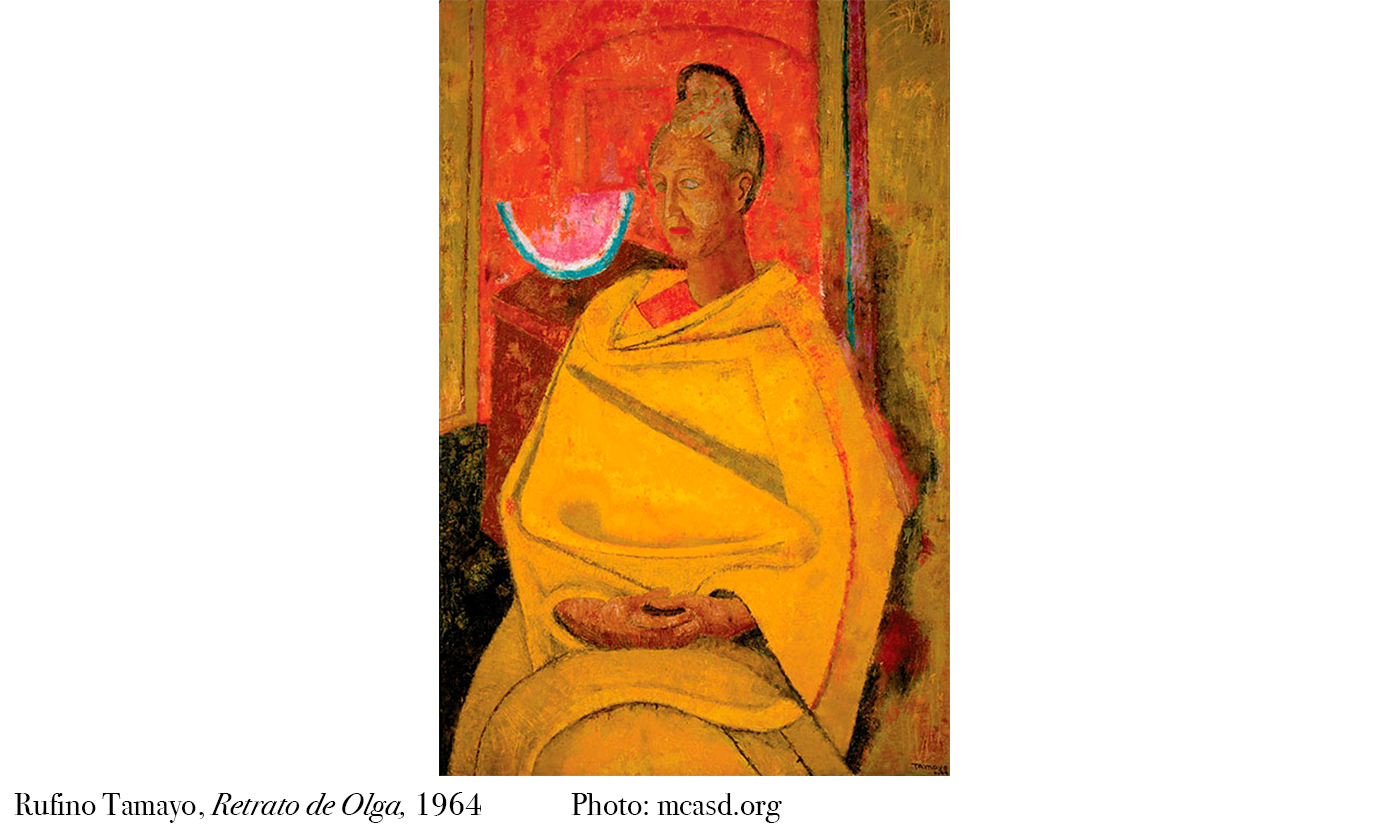 Olga Flores Rivas was one of the most important women in the painter’s life. They met in 1933 when Tamayo was painting a mural at the then National Conservatory of Music (Mexico City); a year later they were married. Retrato de Olga was painted to commemorate their 30th anniversary as a couple. The painter exalts his wife’s Mexican origin using cubist sparkles. This is just one of many portraits he painted to evoke her affection; a sample of the artist’s mature stage. 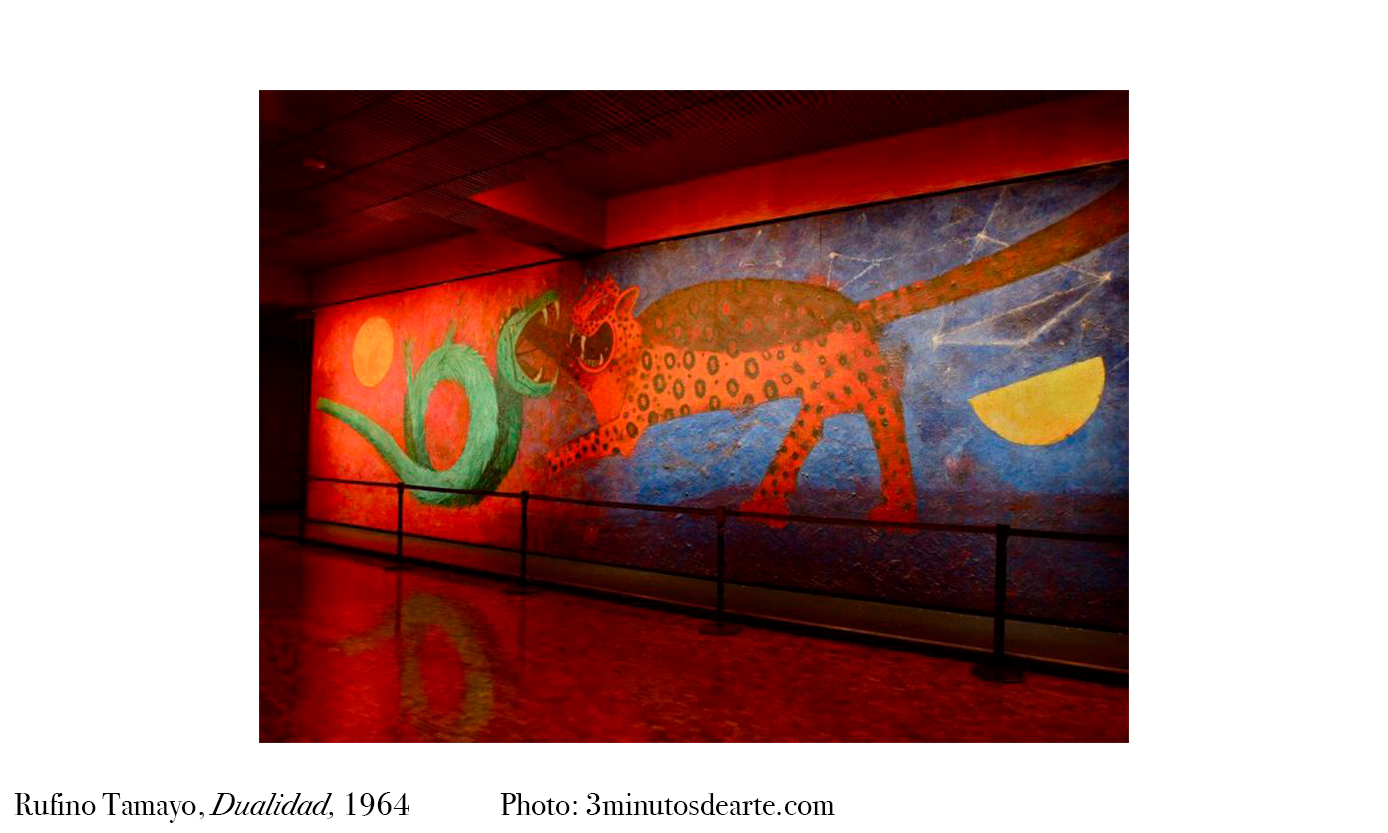 One of the most emblematic murals by the Oaxacan artist is in the Jaime Torres Bodet lobby of the National Museum of Anthropology and History (Mexico City). The work symbolizes the struggle between day and night as seen from the pre-Hispanic cosmogony. Commissioned by the Museum of Anthropology, the main elements of the work (Quetzalcóatl, Tezcatlipoca and the Big Dipper) show the dual confrontation of ancient Mexico. The mural measures 3.53 x 12.21 and was made with sand on linen and vinelite cloth. 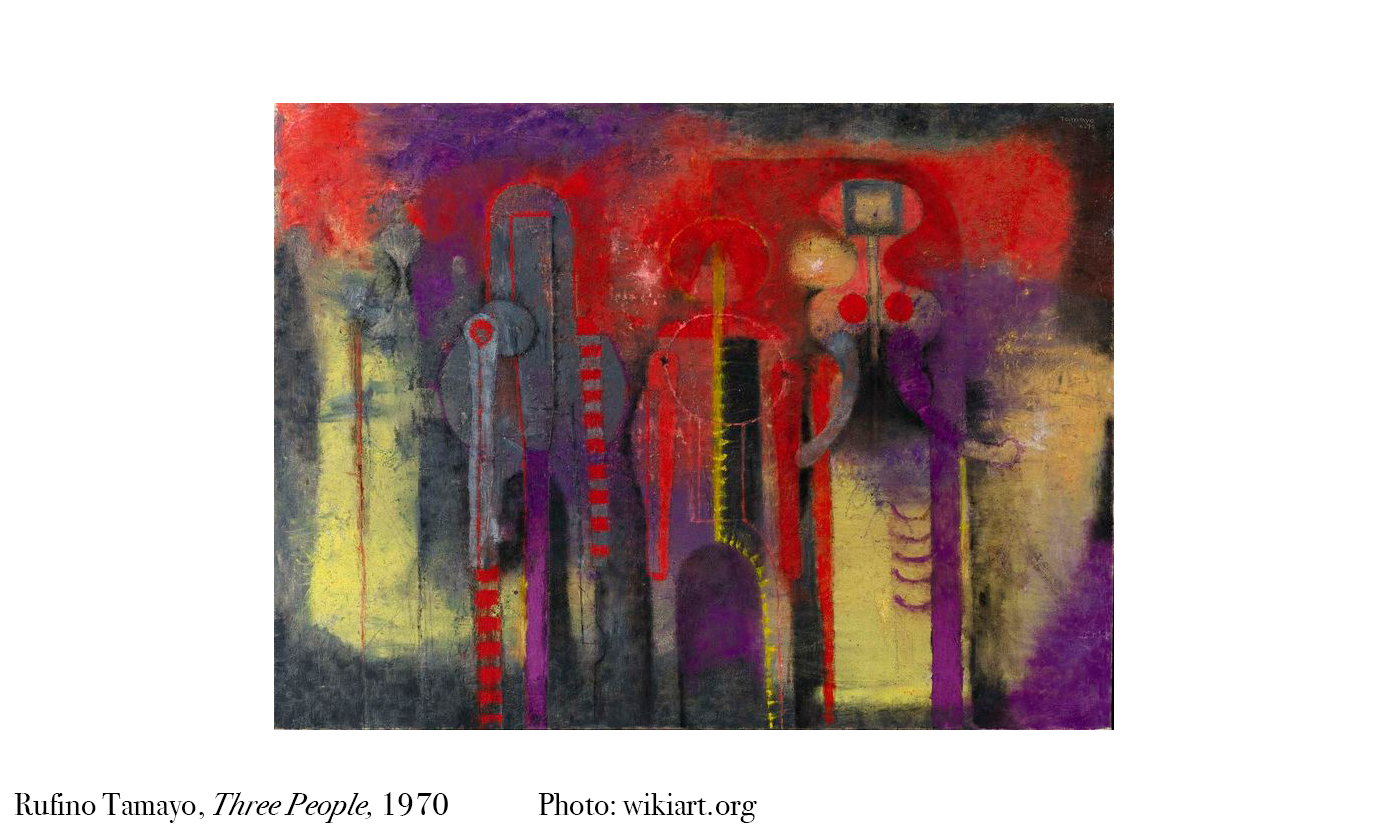 We’re talking about Tamayo’s most eventful play. In 1977 it was acquired by a collector and businessman from Houston as a gift to his wife.  10 years later it was stolen during a move. But in 2003 Elizabeth Gibson found it lying in the trash in New York.  Sotheby’s auctioned it off in 2007 for $1 million. The work shows a woman, a man and an androgynous figure made of sand and marble dust. 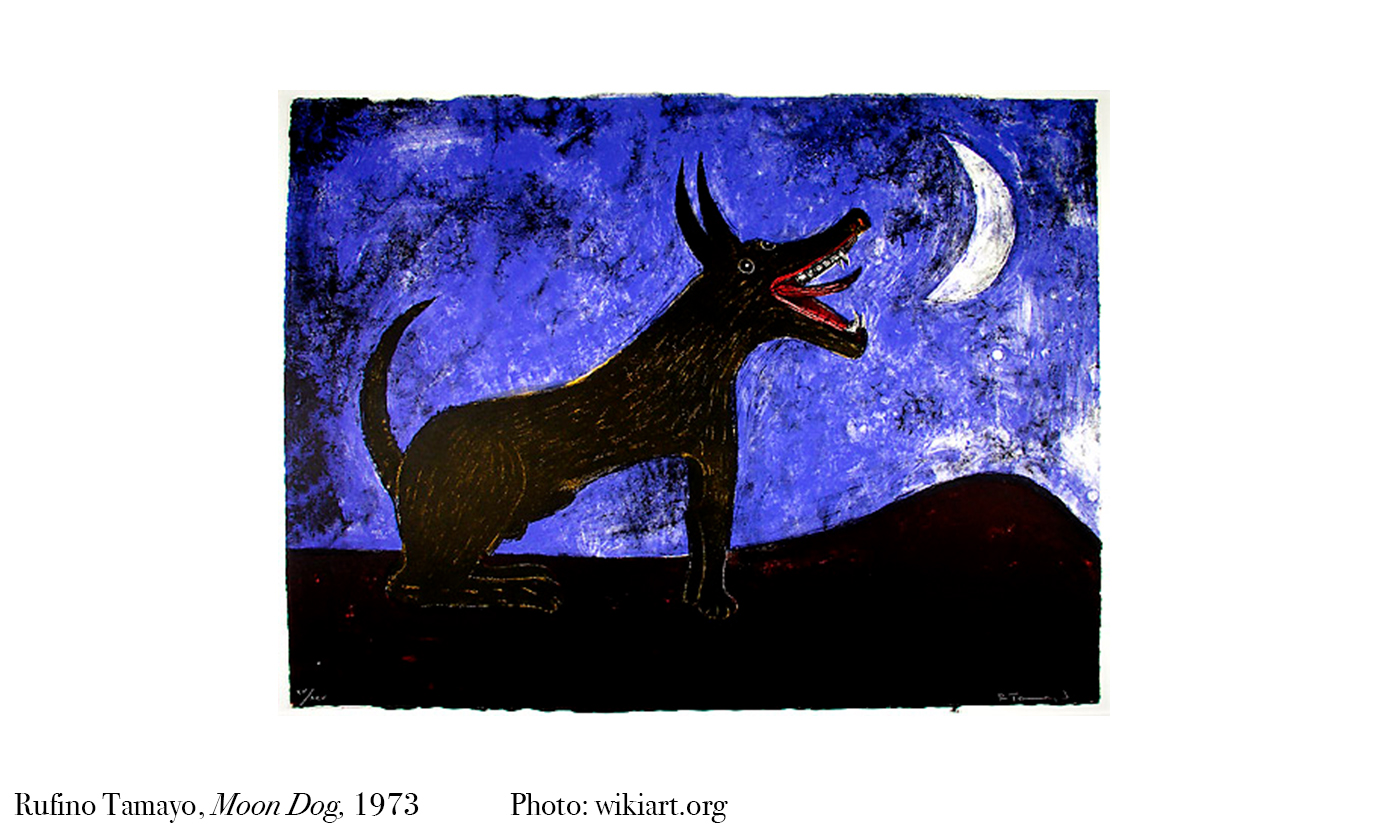 This color lithograph, created for The Mexican Masters Suite, was published by Edition Press San Francisco and highlights Tamayo’s pre-Hispanic interest: izquincles (a dog of Mexican origin) reflects on nature and the cosmos. This work is one more in the extensive series that the artist dedicated to dogs; his interest in the ancient elements of his nation never ceased to be a source of inspiration. 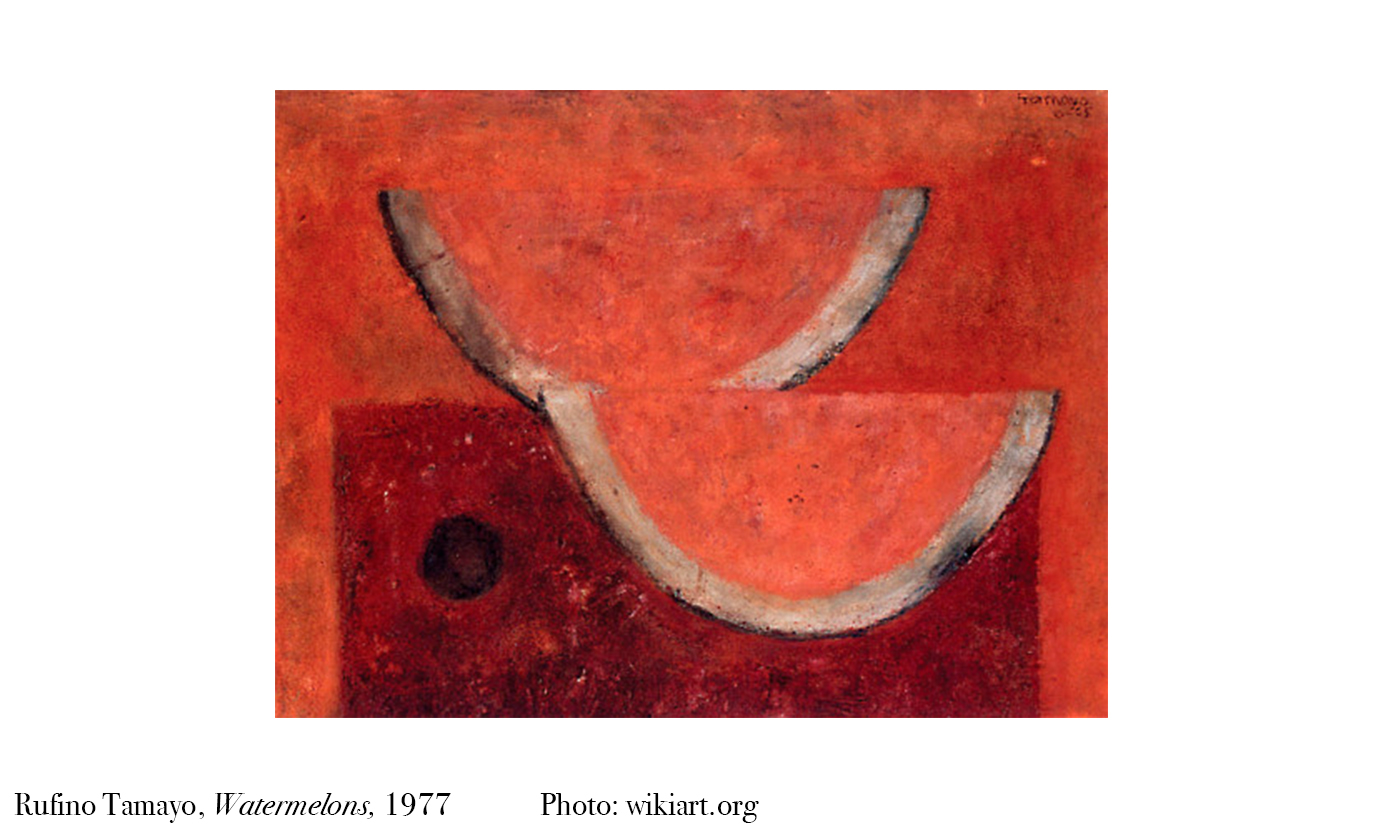 Rufino Tamayo worked every day at the Mercado de la Merced. Since then he made watermelon one of his favorite fruits: he dissected it figure in many of his paintings. In 1981 Abraham Zabludovsky and Teodoro González de León designed the Museo Tamayo Arte Contemporáneo, which houses the most important collection the artist ever stored, including names such as Picasso, Lam, Miró and Bacon.