The Women Who Changed the History of Art

We began a series of profiles of women who, due to their aesthetic, political interests or the way they changed the perception of art history, have become fundamental references in this discipline. Our purpose is to reassess those women who have been held in low esteem by history to claim their contributions. We order them according to their date of birth.

Gas spread across the small apartment. It is not known if it was an accident. Perhaps a suicide. It was December 14, 1927 in Paris. The mother of the readymades, the Queen of the Dada was gone forever.

Elsa Hidegard Baroness von Fraytag – Lorighoven was born in Swinemünde Pomerania, Germany. The daughter of Adolf Plötz, a temperamental and controlling man, and of Ida Marie, the Baroness discovered one of the actions that changed art forever: discovering objects, changing places and giving them meaning based on their new contexts. What type? Everything: temporal, spatial, discursive contexts…

The Baroness studied art and worked as a model in Dachau, near Munich. She married three times, the second time to writer Felix Paul Greve, who took her to America, where she ended up settling in Manhattan. According to a close friend and first biographer, Djuna Barnes, the Baroness “was one of the ‘terrors’ of the district.”

The Baroness did everything: painting, sculpture, artistic ensembles, performance and poetry. She was also one of the promoters of one of the most important activities today: art as a way of life.

Despite being recognized for her painted portraits, her delicate sculptures of found materials, and her daring assembly-style costumes, for a few years now her name has made the main headlines in newspapers and magazines for being named the true creator by Fountain, which has historically been attributed to Marcel Duchamp. The newspaper El País explains it as follows: “The historian Irene Gammell even goes so far as to point out how the urinal could have been the creation of the Baroness Elsa von Freytag-Loringhoven, a model, vaudeville artist and incredible poet who soon incarnated Dadá in the United States. United from their home in the New York Village […] Obviously neither the detractors nor the passionate of the artist have wanted to give fuel to the hypothesis. It makes them dizzy to depart from their patriarchal genealogy in which the “teacher” Duchamp occupies a prominent place for good and for evil. Be that as it may, the funny thing is that perhaps Duchamp’s rabid detractors have spent a century hating him for something he hasn’t even done. Naturally the economic reasons also have their weight. Can you imagine that MOMA, San Francisco or any of the great museums change Duchamp’s unique authorship on the urinal billboard?” 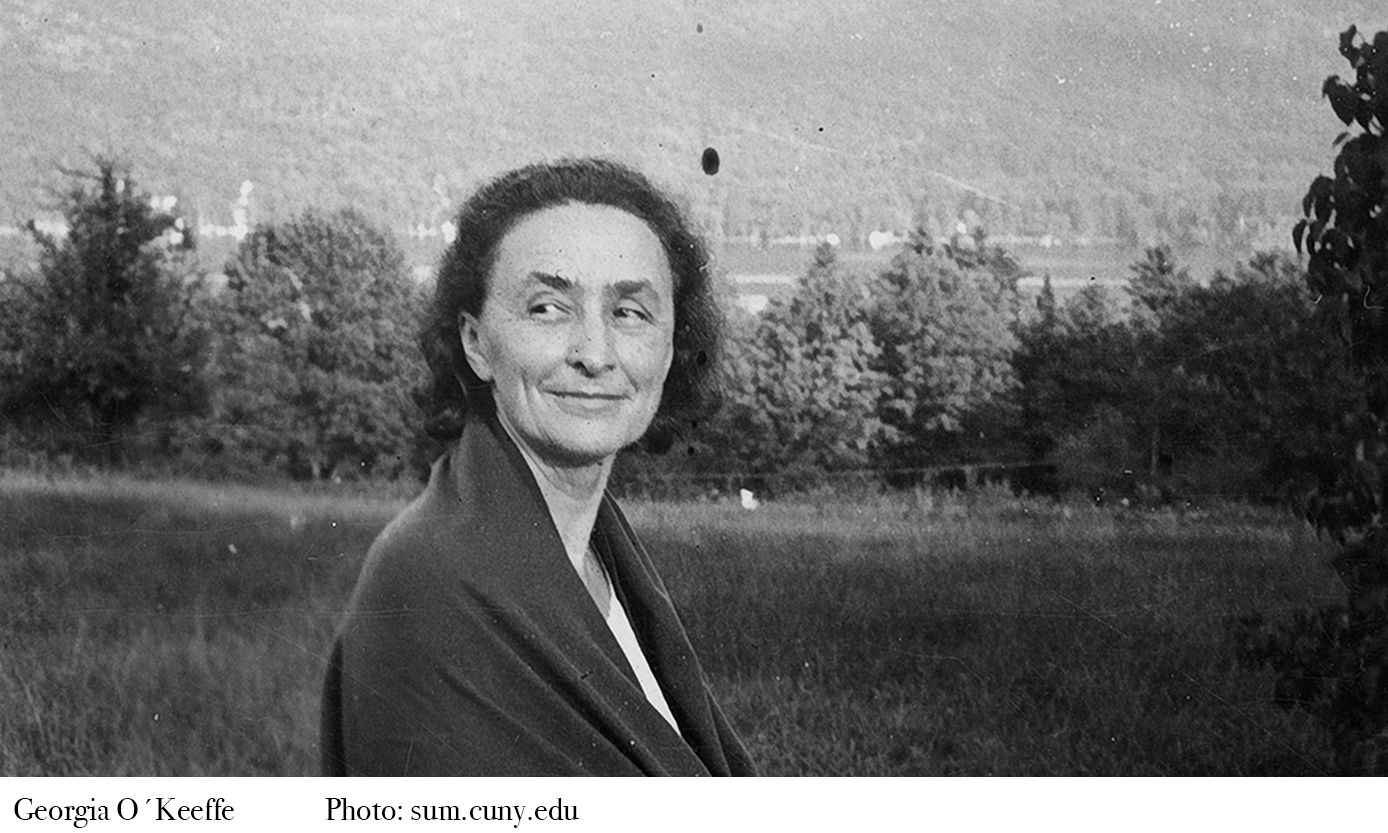 Georgia O’Keeffe knew from the age of 12 that she was going to be a painter. Often, she said so in various interviews. The second of seven children, she began her arts education when a watercolor instructor came to the house to teach her and her sisters. After graduating from high school, O’Keeffe was first in her class at the School of the Art Institute of Chicago from 1905 to 1906. In 1907 she attended the Art Students League in New York City, where she studied painting realistic in William Merritt Chase, Kenyon Cox and F. Luis Mora.

O’Keeffe sought her own style by breaking into the New York scene with a series of charcoal. Photographer Alfred Stieglitz, who was also an art dealer, showed great interest in her work; she, for her part, became his muse and model and in 1924 they married.

Probably her most decisive time occurred in the 1920s, when she painted pictures in New York. After Stieglitz’s death in 1946, she permanently moved to New Mexico, where she spent a lot of time painting in her car looking at the northern landscapes. He loved the terrain, the bright colors and the quality of the light.

In November 2014, her Jimson Weed / White Flower No. 1 (1932) painting was sold at auction for more than $ 44 million. The mother of modernity, she became the first best-selling woman in art.

I think all painting is biographical.

I think you can read any artist

if you take the trouble too.

We are near East Hampton on Long Island, in 1945. The view is exceptional: from here you can see the Accabonac stream. A piece of heaven. Then two people sitting next to each other. Their names: Jackson Pollock and Lee Krasner. No more no less.

Lena Krassner or Lee, as she liked to be called, was the fourth of five children born to a Russian-Jewish couple: Anna (Chane) Née Weiss and Joseph Krassner. Her artistic concerns began at age 14, when she was attending Washington Irving High School for Girls. After graduation, she received a scholarship to attend the Cooper Union School of Art for Women.

Later, Krasner studied art education at the illustrious National Design Academy. With the Great Depression, her dreams of becoming a full-time artist were known until 1934, when she landed a job painting murals for the Works Progress Administration Public Works Project.

From 1937 to 1940, she studied under Hans Hoffmann. Back then her naturalistic paintings and drawings had a cubist approach, where she reached a new level of high sophistication. Many recognize her as a true promoter of a new artistic trend. Her participation in the art scene had political interests. To this end, Krasner teamed up with American abstract artists.

In her paintings we can perceive the texture, the rhythm and the representation of organic images. Lee’s interest in self-nature and modern life are the most common themes. Her most important pieces are Little Images (1946), categorized as mosaic, Collage Images (1951), created by lying support on the floor, Earth Green Series (1956), which reflected a certain pain over her relationship with Pollock, Umber Series (1959) and Primary Series (1960).

Of it Grace Glueck commented for The New York Times: “Lee is a major, independent artist of the pioneer Abstract Expressionist generation, whose stirring work ranks high among that produced here in the last half-century.” 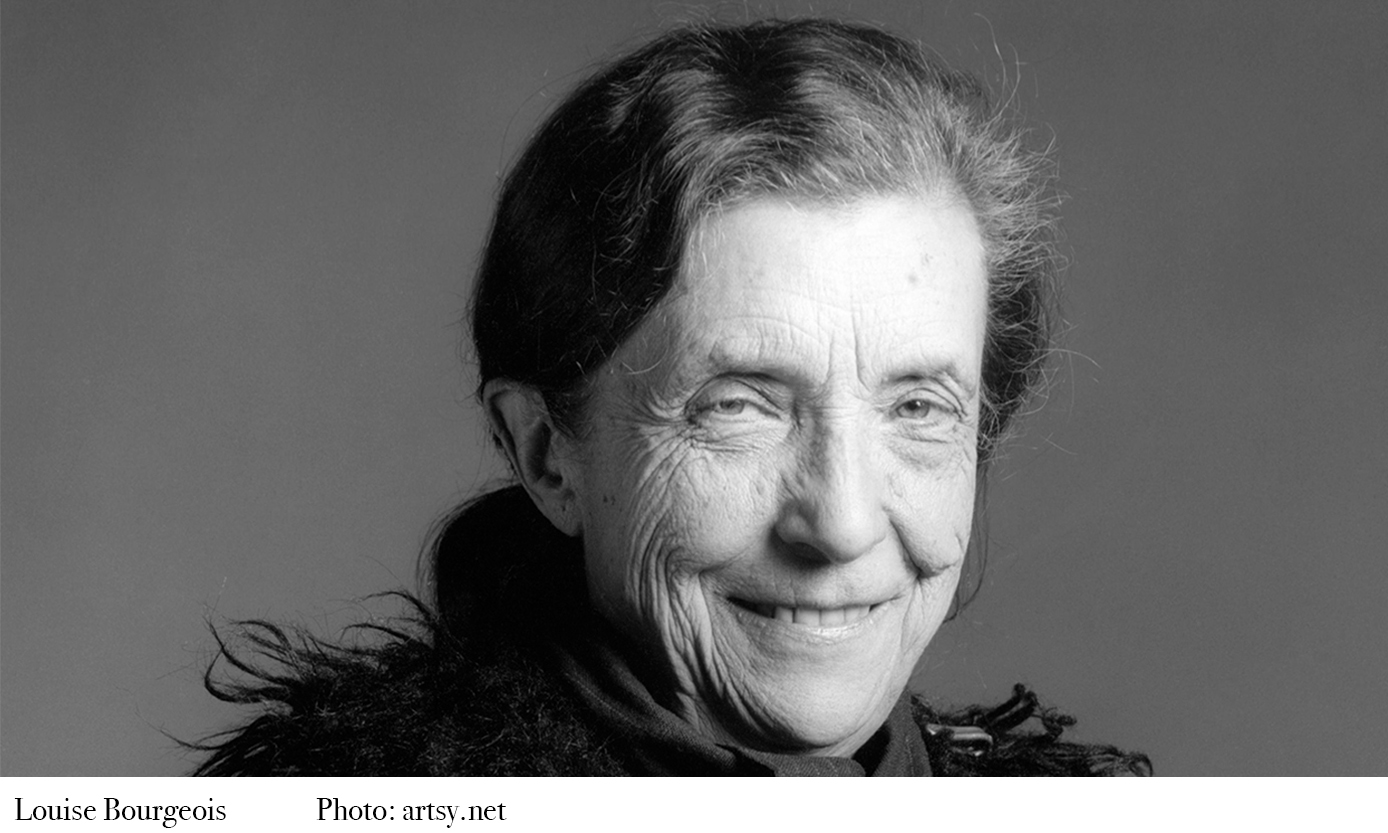 Art is not about art, Art is about life.

Obsessed with domesticity and the family, sexuality and the body, death and the unconsciousthe, the art of Louis Bourgeois leads the viewer through a maze of emotions through different platforms: prints, paintings, large scale sculptures and installations.

Daughter of Josephine Fariaux and Louis Bourgeois, the childhood of Louise Bourgeois was, in her own words, very difficult. A good part of her most seductive artistic images come from the memories of that time: murderous spiders, devouring mothers, unprotected daughters. Her family owned a gallery that made unique tapestries. There, little Louise began to explore her skills combining design with art.

Bourgeois studied mathematics and geometry, because she found tranquility in numbers. However, when her mother died she gained the inspiration and courage to dedicate herself fully to art. At 18 she worked at the Louvre giving guided tours. In her first works as an artist she was interested in abstract expressionism. And from the beginning she flirted with surrealism and feminist movements. Today she is one of the most important representatives of feminist art.

“Spider woman,” as some called her, Louise Bourgeois gained recognition until the last part of her life. In 2000 and as part of the opening of London’s Tate Modern, Bourgeois unveiled with great impact Maman, a large-scale sculpted spider that symbolizes her relationship with her mother. Critics recognized in Bourgeois’ art a genuine interest in fear, rage, mystery, and fantasy. In 1938 Louise met Robert Goldmaler, an American historian, whom she married and moved to New York. A little later she said one of her most famous phrases: art is a guarantee of sanity, which explained part of the reasons why she had become an artist. Among her most important works can be mentioned Maison Fragile, Fragile Goddess, Janus Fleuri, Destruction of Father, Cells and Maman. 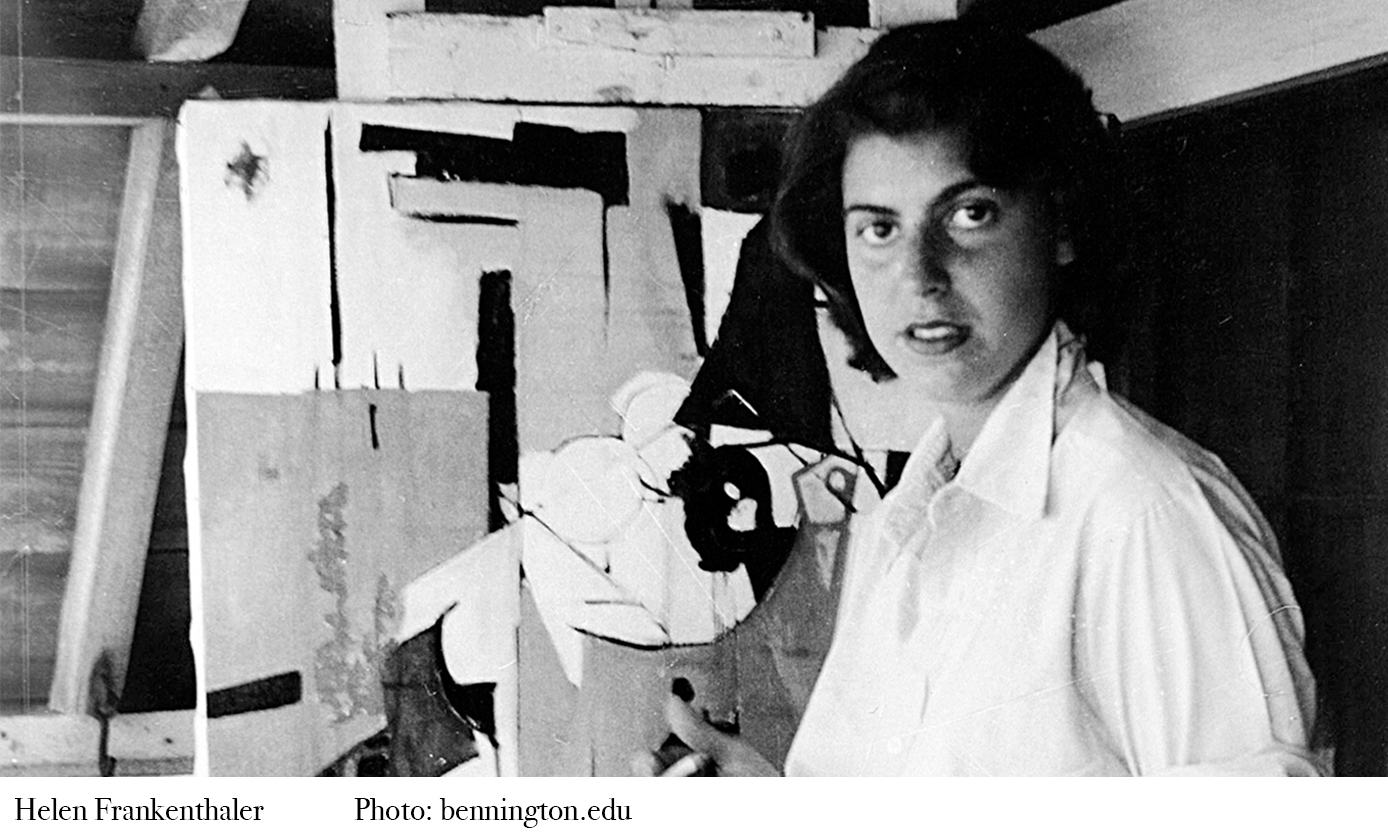 The whole idea of working on the floor, working from all sides.

In a way, dishonoring everything painting had been about, assuming

you knew everything it is about and loved it.

Learned it all and threw it all away…

Many things can be said about Helen Frankenthaler, but her legacy can be defined in one line: she was one of the most important artists of the 20th century. The youngest of three sisters, daughter to Alfred Frankenthaler (a respected N.Y. Supreme Court Judge) and Martha Lowenstein a German immigrant, her long artistic carrier begun at Dalton School under the muralist Rufino Tamayo and continued at Benington under the direction Paul Feeley where she became an experienced student of cubism.

After graduating in 1949, Frankenthaler went back to New York, where she rented a studio a started a life as an artist. Thanks to her friendship to Clement Greenberg (art critic), she met Pollock, De Kooning, David Smith, among others. Then, she became part of the New York school – an art movement that changed the history of this discipline. From then on she parted from cubism, eager to find a unique style. And she did it: Helen Frankenthaler is credited with the invention soak-stain, a technique, “in which she poured turpentine-thinned paint onto canvas, producing luminous color washes that appeared to merge with the canvas and deny any hint of three-dimensional illusionism”, in the words of The ArtStory.org. Pouring colors, modulating tones, creating shadows, using big sponges and brushes and walking from side to side, the new waltz around the canvas had started.

Of her said E.A. Carmean Jr., a museum curator and director and modern art expert, “Mountains and sea – was created, with an incredible, historical significance. What Pollock had done in his black and white pictures was transferred to the next generation in this Frankenthaler masterpiece. There was no lead up to it, she merely looked at Pollocks work and then took this one giant step away from it. This would project the basic direction for abstract painting for the next 20 years.