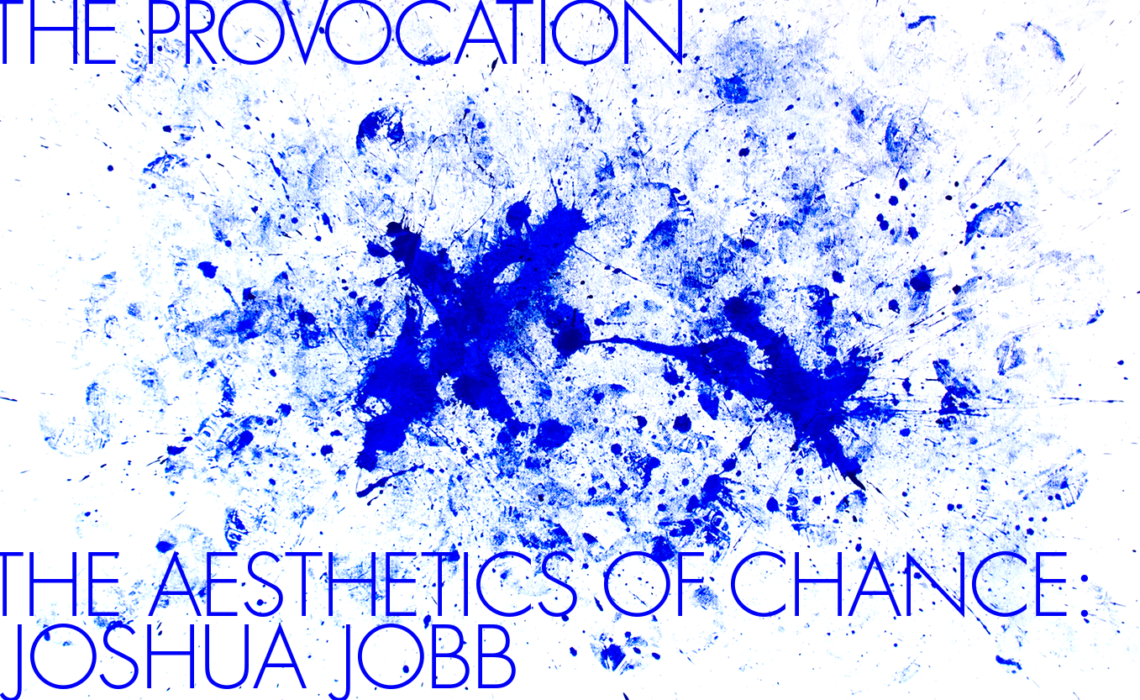 The Aesthetics of chance Joshua Jobb

René Dumal, Pataphysics and the revelation of laugher

Natural Interventions presents a solo show by Mexican artist Joshua Jobb. His pieces of art works around concepts such as chance, play, accident and the unexpected. His artworks use materials designed for a context that through his intervention suddenly become something else.

Behind the work of the Mexican artist there are close ties with writers such as Voltaire, Aldous Huxley, and Italo Calvino, among others. Books play as much a role in his creative process, as random walking does. Yet header inspiration comes from the “Pataphysics”, by René Dumal: “Definition.- Pataphysics is the science of the imaginary solutions, which symbolically attributes the properties of objects, described by their virtuaulity, to their lineaments” (Jarry). It is the knowledge of the particular and the irreductible, therefore the reverse of physics”[1] . A maximum skepticism can be deducted, one in which knowledge seems impossible. Chase the chance, because causality is a mere illusion. The world is unfinished, remaining without logical comprehension. In this context, to play makes sense, precisely because taking life very seriously, doesn’t: “Play, which is as fascinating as catastrophe, allows you positively to glimpse the giddy seductiveness of chance”[2]. 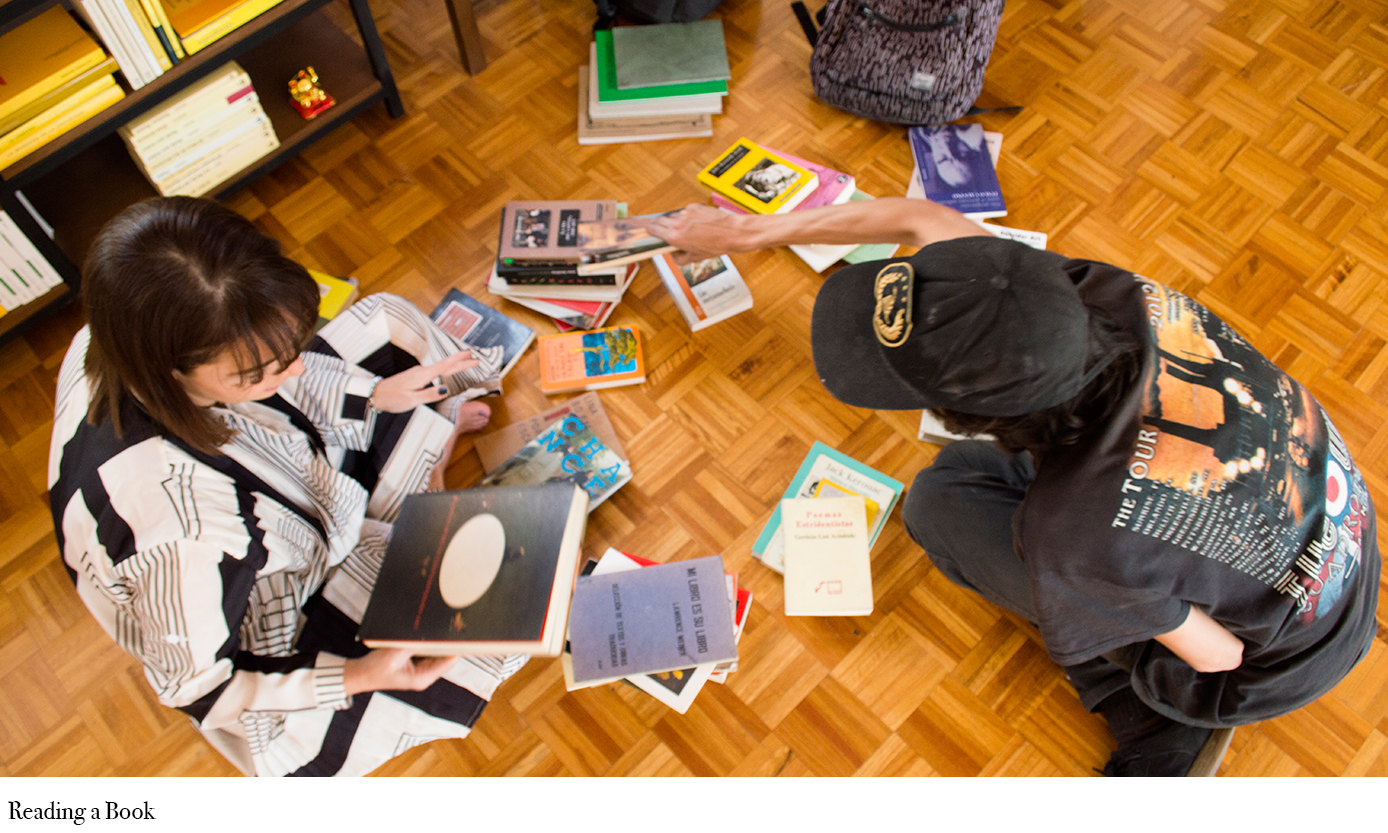 The rationalist dream vanishes: play to encounter the fortuitous; risk to meet the accident. Chances are a source to explore and discover, not to judge if something is right or wrong.  It is an affirmation of life more than an effort to restore chaos. To introduce chance in art is to deny intentionalism and full control power, replacing that with the openness of permanent experimenting the work and with the work as somehow being open to unpredictable effects. An aesthetic of immanence in which the only constant is to change. It is creating without a defined aim and method by accepting that the only thing that belongs us, are our mistakes.

Joshua wanted to draw. But not in the traditional way. He took the pencil, usually identified as drawing medium, but he decided to use it without paper and instead devastating the pencils. 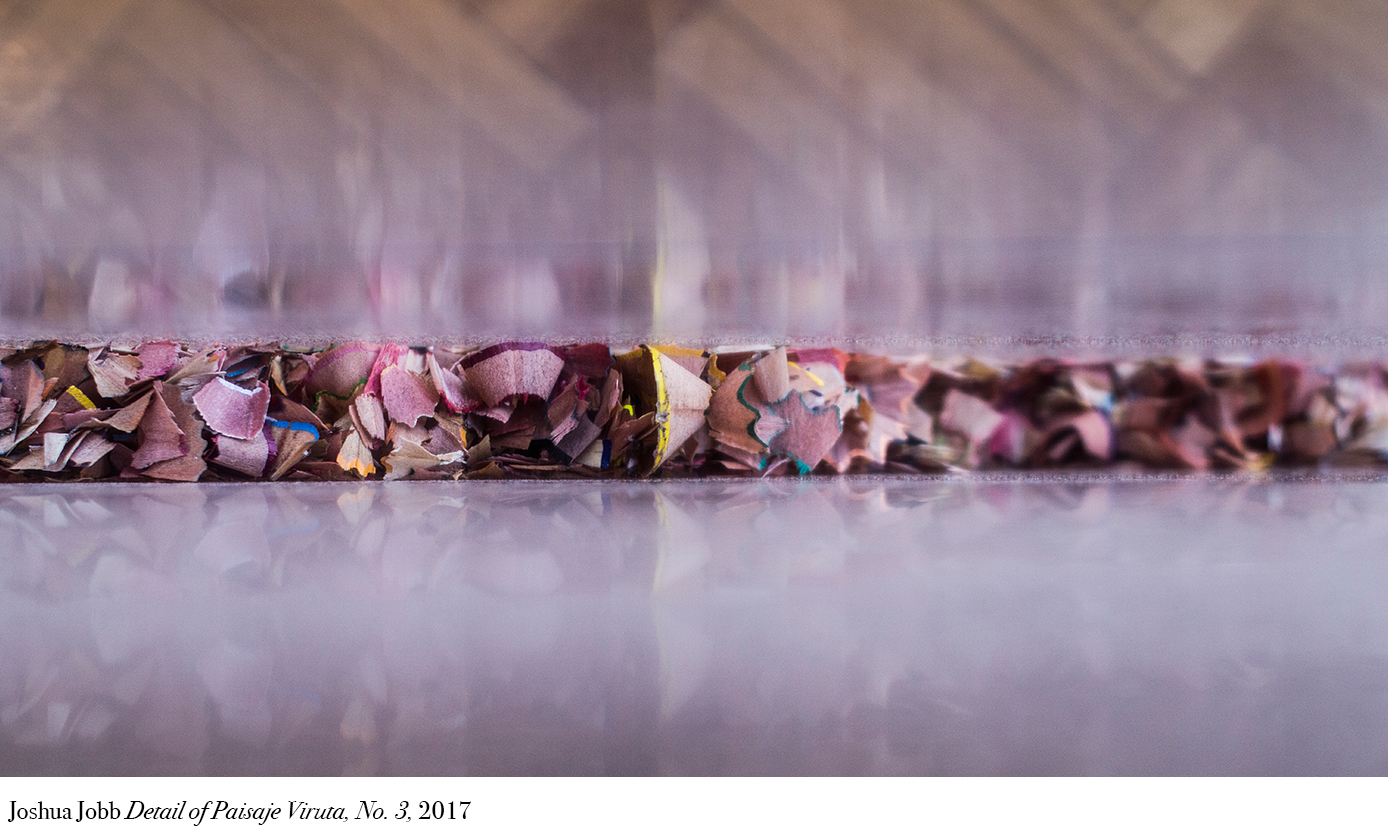 His work explore non-conventional material for advancing his artistry. He plays with the shocking, but she is also tempered, gaining a sense of equilibrium. Visually, “Paisaje Viruta” presents an acrylic box filled with chips. The brownness creates a pleasing perceptual arrangement when combined with soft and elongated curves. Even more, we reach a sense of “horizon” far distant, when we see the line dividing the portentous brown from the whiteness. In this respect the piece could be a landscape work. It is also important to see the sharpener at the top. This is a recursive element that pervades Jobb´s work. Leaving the game trace there, as an invitation to activate the piece at another occasion. 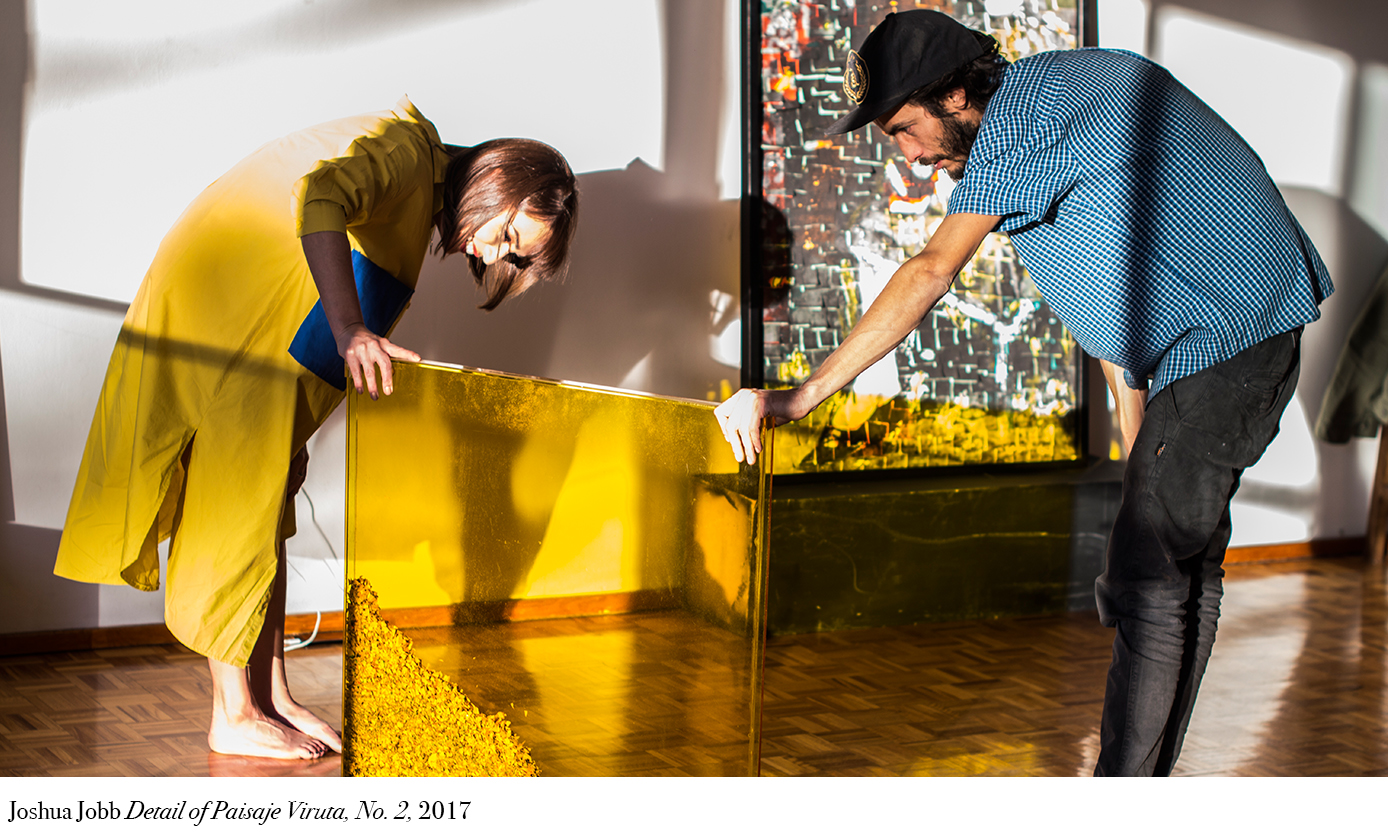 “Experience is not what it happens to you, but what you do with it” said Aldous Huxley.  Conversion is more important than the event itself and interacting with it opens the window of opportunities. Experience in this regard challenges the experiencer, who is invited to take responsibility in an active way. Be aware. It is about understanding the chances, while you have your eyes wide open.  Chances may occur in random ways, without announcement, method or causality. Can we accept that some things happen in mysterious ways? . His openness to encounter in fortuitous ways things that will be transformed into aesthetical objects is his signature. Following Huxley, what he does with his experience is finding alternative visions, the way out will have to be found. He does it from a very ludic attitude. While playing with reality, he discovers. Taking the given as a game allows him to find alternatives. Life is never finished. It is also not so serious. Encounters happen in a natural way and Joshua Jobb simply intervenes them. 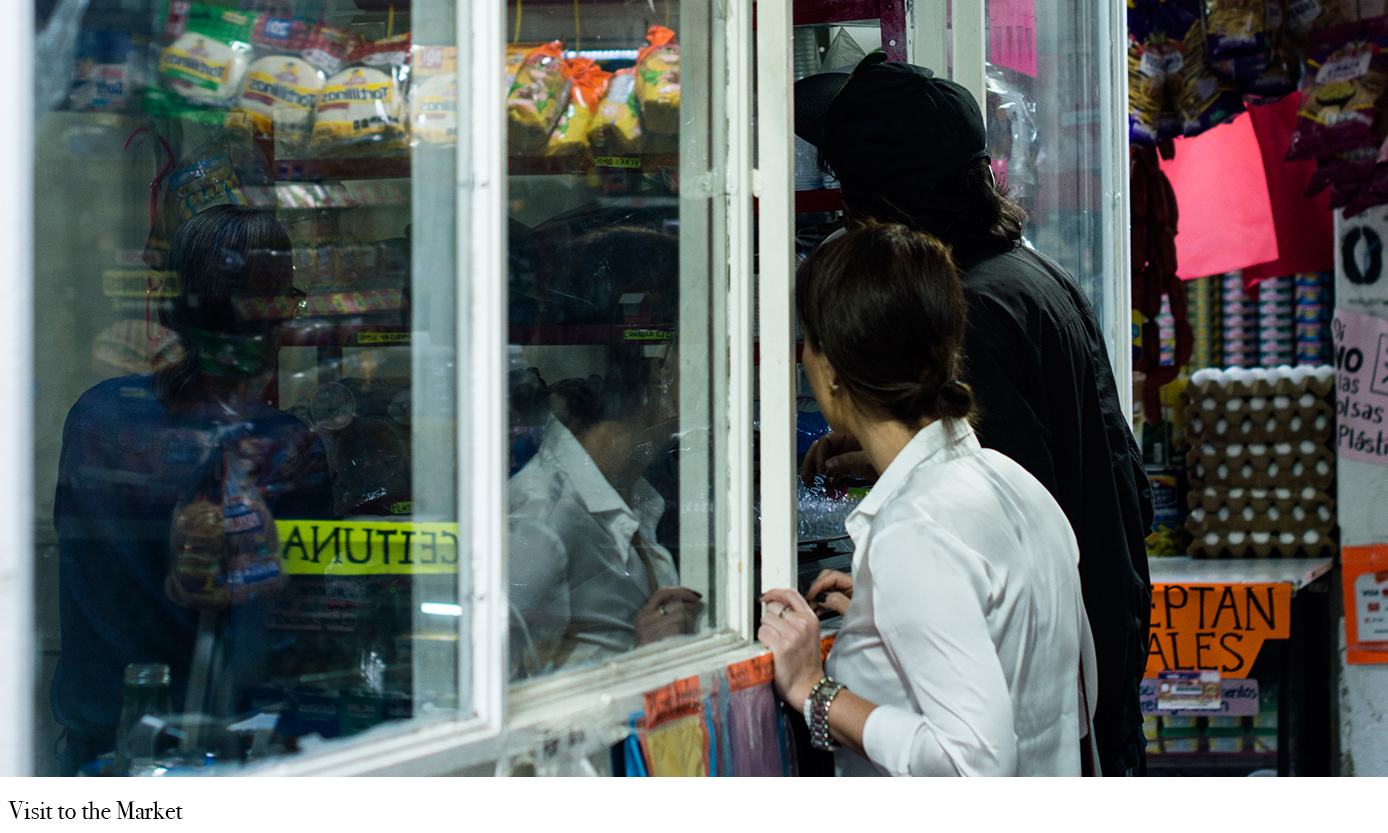 In capitalistic terms, time is money, in the sense that time is equal to work, to produce. Already the Greeks, identified the time division based on labor, and  Hesiod´s opera prima, “Works and days” is an example of it. Leisure remained a privilege of the reach, until the appearance of the middle classes, who paradoxically pay for fun, joy and resting from work. Doing something without aim, and spending time, doing nothing is therefore wasting time. “No hay espacio para bordar”, displays a sculptural assemblage consistent in the spirit of removing functionality out of the objects, to create.  “There is no such thing as an empty space or an empty time. There is always something to see, something to hear”, John Cage dixit. The sculpture is a wood composition, made of embroideries that through their juxtaposition make the space visible. They set limits to the emptiness with the wood confines. Looking almost like a mobile when hanging in the wall, the connection of the 6 rings create a game of shadows and intersection points forming different geometrical shapes in which the extension is visible in different scales.  Look in! 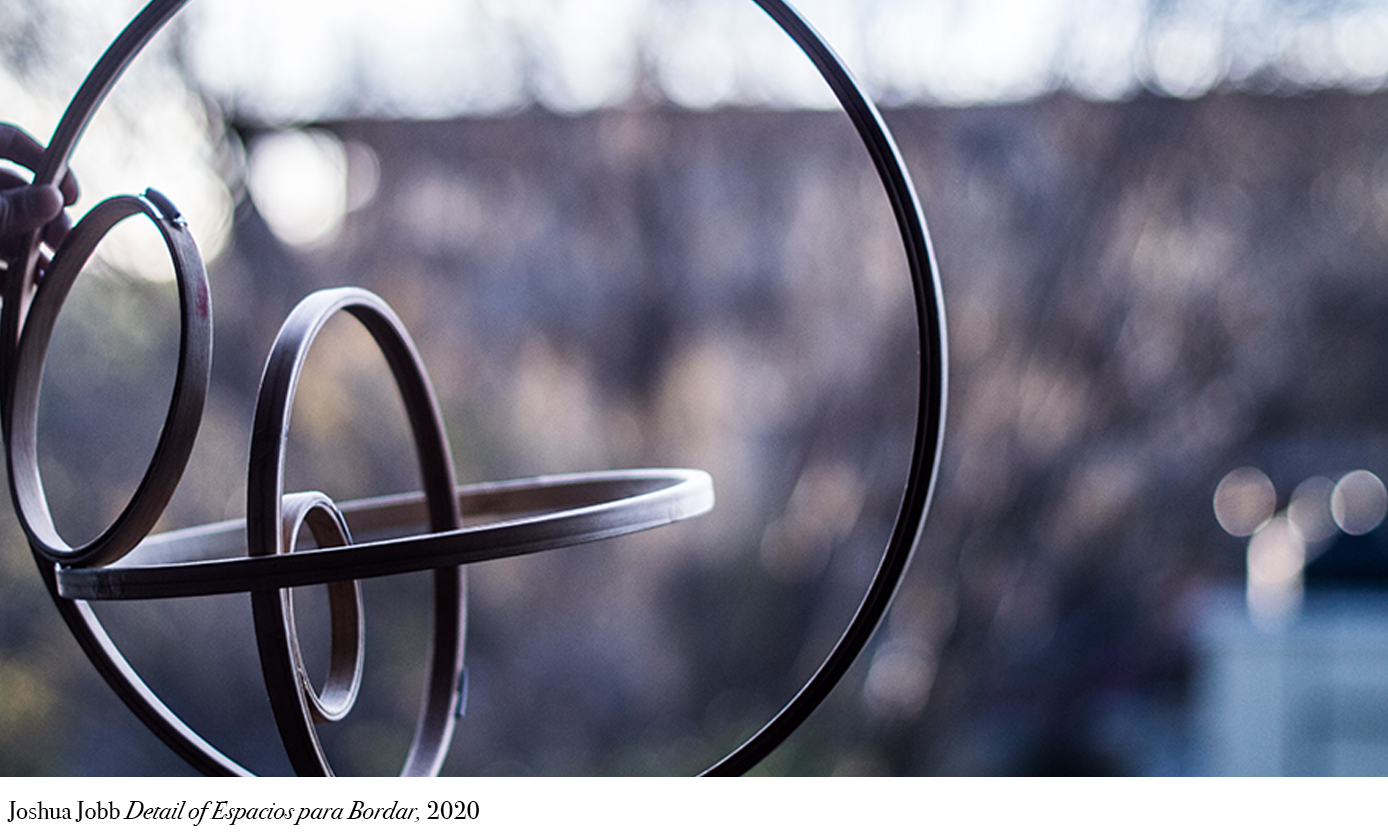 In the beginning, or perhaps

Close to where something began

There were probably only 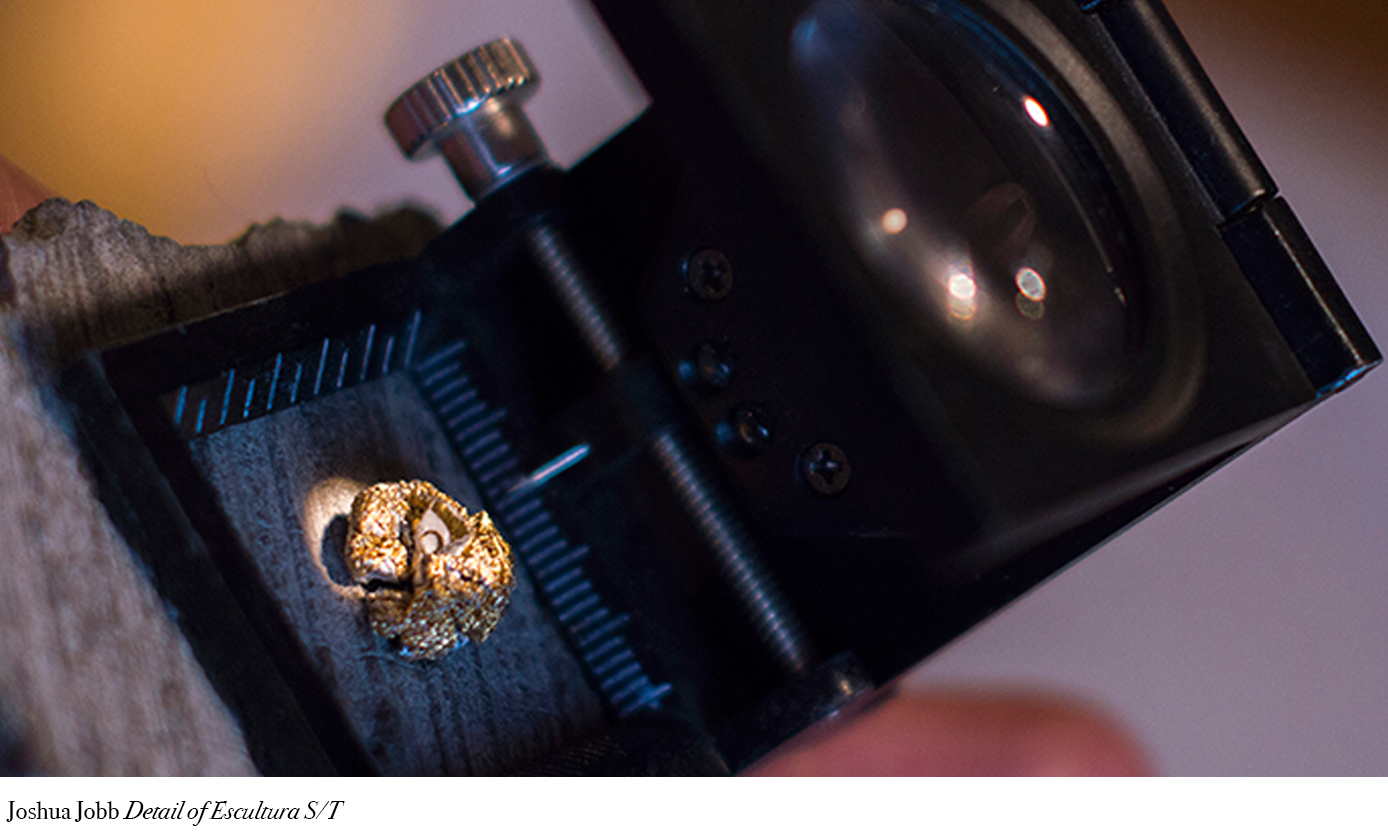 Accepting the unpredictable is dealing with the risk , with the fact that all can go in a different way. But if anything, that is the only aim. What follows, I asked Joshua,  for his next work. Going out, Walking again, randomly, …