Installation art is known for challenging viewers; it can be gritty, defiant, quirky, and even dismal. It can represent volatile experiences from the past or make fun or common social norms. Prada Marfa may be a perfect representation of strange decadence in a foreign (to the everyday city dweller) world.

There was a Marfa, Texas before Prada Marfa, but one cannot deny what the iconic installation-turned-museum has done for Marfa’s notoriety (even though it stands over 30 miles OUTSIDE of Marfa proper). It almost embodies the whole idea behind an artsy community in the middle of the Texas desert, with miles of scrub and longhorns to welcome art-loving visitors, who likely echo the classic road trip question “Are we there yet?” as they zoom along the open road for hours.

Berlin-based artists Michael Elmgreen and Ingar Dragset created this pop-culture land art project in the fall of 2005, to stand unchanged in the desert. Borne out of a silly sign in NYC which hinted at gentrification and consumerism as a powerful modifier to neighborhoods, nonprofit Art Production Fund and gallery Ballroom Marfa provided the nearly $100k necessary to make the dream a reality. The name “Prada” holds a special meaning for those in art and fashion, both for being a cutting-edge designer and for its mystique as virtual authorities in fashion. Prada, a notorious supporter of art, approved the use of its name and even provide a few items of inventory from their 2005 collection to add to the feeling of a true free-standing boutique in the desert. This pop art installation is a true blending of art, fashion, and museum, visited by art enthusiasts, celebrities, and tourists alike.

Anything built along a roadside is fodder for vandals, and even in the middle of nowhere, Prada Marfa was no stranger. Immediately after it was revealed, someone broke in and stole all the inventory. GPS trackers, cameras, an alarm, and even its own personal bodyguard (a local sheriff) was instilled to protect the building. In classic Texas style, one contactor even suggested rattlesnakes be placed inside for protection.  From being spray painted to being shot at, Prada Mara has seen a lot of angst.

The most noteworthy act of vandalism, however, was a bit more calculated. Another artist (perhaps envious and wishing for notoriety at any cost) seriously damaged Prada Marfa in 2014, including dumping blue paint on the sides, cutting the awning, and gluing nonsensical signs on the front. The offender left a sort of written explanation of his act, spewing dissatisfaction about commercialism and calling the building TOMS Marfa in response to anger with the retailer’s failure to help prevent economic inequality in its business-doings. This is a strange site upon which to leave damage, since the origins of the exhibit lie in a similar observation. Multiple volunteers and thousands of dollars later, Prada Marfa was returned to her previous glory(?). Donning the marks of both average hooligans and envious limelight-seekers, Prada Marfa lifts its head up high as if to say, “So What?”, and the artists confidently reported that Prada Marfa was designed to weather the treatment, letting nature decide its lifespan. 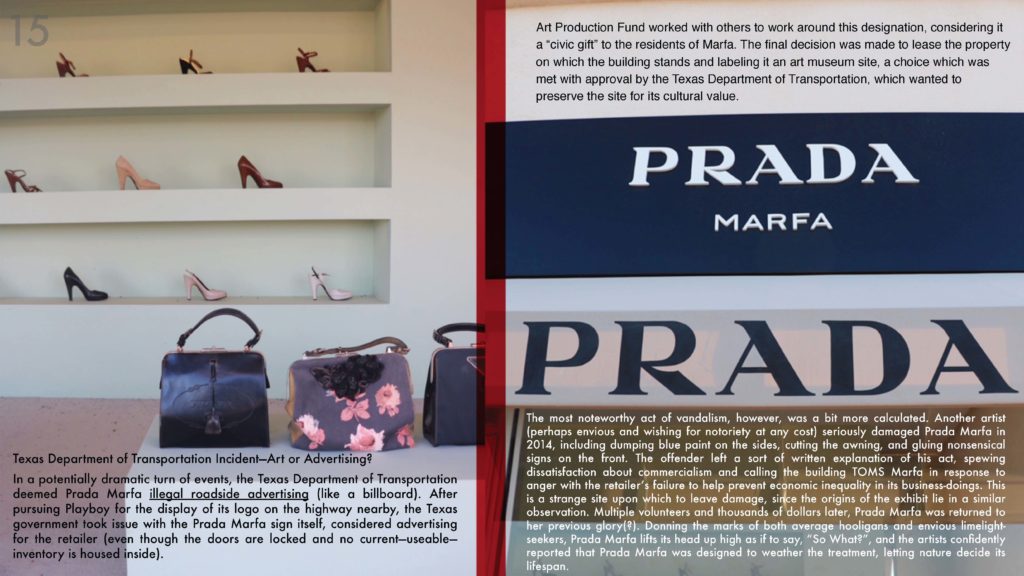 In a potentially dramatic turn of events, the Texas Department of Transportation deemed Prada Marfa illegal roadside advertising (like a billboard). After pursuing Playboy for the display of its logo on the highway nearby, the Texas government took issue with the Prada Marfa sign itself, considered advertising for the retailer (even though the doors are locked and no current—useable—inventory is housed inside). Art Production Fund worked with others to work around this designation, considering it a “civic gift” to the residents of Marfa. The final decision was made to lease the property on which the building stands and labeling it an art museum site, a choice which was met with approval by the Texas Department of Transportation, which wanted to preserve the site for its cultural value.

Making a Mark in the (Art) World

No matter how you feel about the consumerism and even hedonism expressed in Prada Marfa’s brazen existence in rural Texas, where the population couldn’t dream of shopping within its stucco walls, it is a successful installation. Successful for provoking passersby, drawing visitors to photograph themselves in front of is mystical entrance, and enticing people to search online for information about this strange facility. What IS Prada Marfa and why has it stood outside of Marfa, Texas, for nearly 20 years, weathering an environment truly irrelative to what it represents.