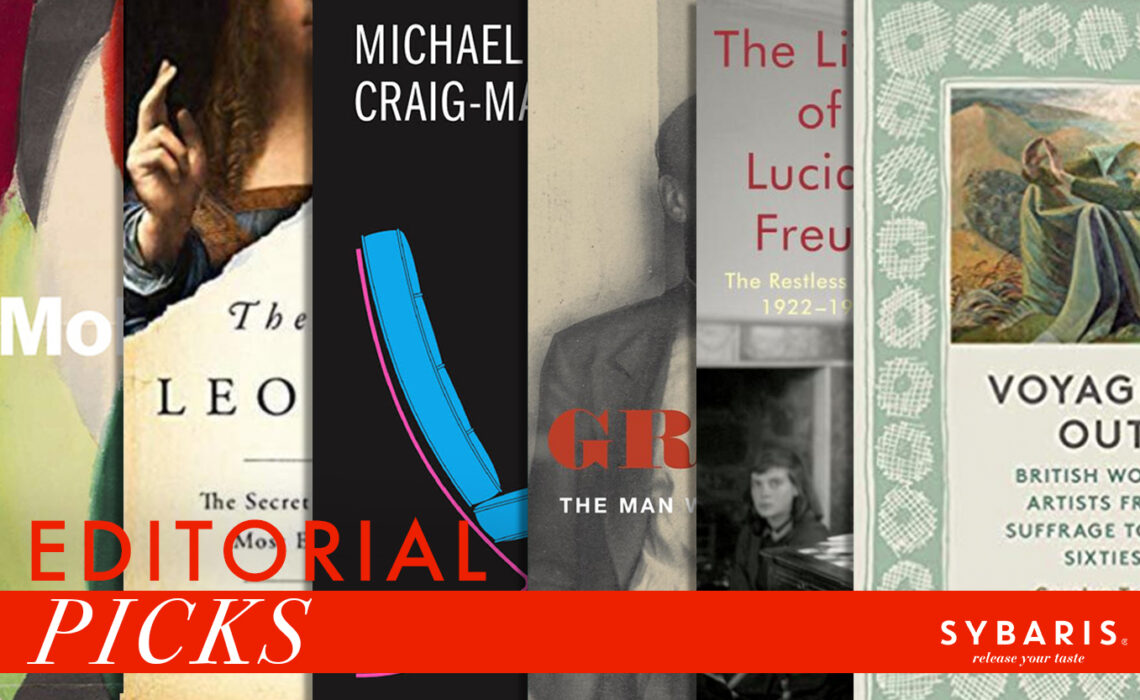 This is an erudite, insightful and amenable readable collection. Few living artists can claim to have had the influence of Michael Craig-Martin in the artworld. He was born in 1941 and he has been celebrated internationally for his art; he has also helped many generations of younger artists. His teachings have combined personal example and individual guidance, offering students insights gained from his own professional highs and lows.

On Being an Artist, which partakes from memory and practical instruction, mixes reminiscence, personal philosophy, self-examination and advice for young artists. In a series of interesting episodes, Craig-Martin expresses himself with wit and candor on many ideas and concepts, events and people that have inspired and shaped him throughout his life, from his childhood in postwar America through his time as an art student in the 1960s and subsequent work as an art teacher, to his international success in later years. 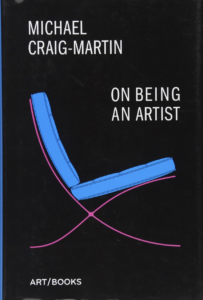 Tittle: On Being an Artist

Craig-Martin enters into controversial issues such as the fashionability of contemporary art, the snobs, the enduring status of painting as an art, the relevance of drawing and practical skills, the qualities of art schools, the role of commercial dealers and the judgment of critics: what is good and bad in art. More than the life of one of the most creative minds of our age, On Being an Artist provides lesson after valuable lesson to anyone wishing to know what it means and what it takes to be an artist today. 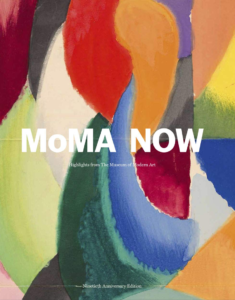 Published to accompany the reopening, this year the Museum of Modern Art celebrates its 90th anniversary with the reopening of its extensively renovated and expanded works of art. MoMA Now is an enlarged and expanded edition of MoMA Highlights, and presents a rich chronological overview of the art of the past 150 years, culled from the Museum’s permanent collection of almost 200,000 objects. Beginning with a photograph made around 1867 and concluding in 2017, the book introduces readers to some of the most beloved artworks in the museum’s collection –iconic works by Claude Monet, Vincent van Gogh, Frida Kahlo and Andy Warhol, among many others– as well as lesser-known but equally fascinating and significant objects of art, architecture and design from all around the world.

MoMA Now celebrates the richness of the museum’s collection and the diversity of issues, ideas and concepts embraced today. This book is not meant to be a comprehensive overview, nor to provide a definitive statement on the Museum’s collection. On the contrary, its purpose is to explore the complexity and variety of possibilities that exist within its collection, and to suggest new and imaginative ways of understanding the works of art that are part of it. Featuring new works not included in earlier catalogues, including a greater representation of works by women, artists of color, and artists from around the world, this new book is both a record of the Museum’s past and a statement in anticipation of a promising future. 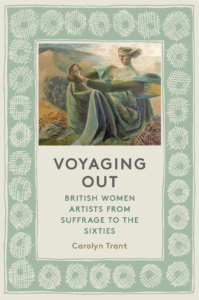 Tittle: Voyaging Out: British Women Artists from Suffrage to the Sixties

This is a fresh book about an urgent theme: in this revealing chronicle of a period of social change, artist Carolyn Trant examines the history of women artists in modern Britain, filling in the gaps in traditional history of art. It introduces the lives and works of a rich network of neglected women artists. Voyaging Out sets these alongside such renowned personalities as Barbara Hepworth, Laura Knight, and Winifred Nicholson. In an era of radical political activism and great social change, women forged new relationships with art and its institutions. Such change was not without its challenges, and with poignancy Carolyn Trant writes about the gendered makeup of the avant-garde and the tyranny of artistic “isms.” A strikingly intimate picture of women, this book brings gender issue into the table once again. Trant’s illustrates the history of British female artists from suffrage to the 60s, and her story is in many ways representative and it certainly need to be considered once again. 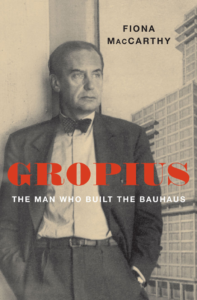 Tittle: Gropius: The Man Who Built the Bauhaus

Fiona MacCarthy brings the image of Walter Gropius as an architectural rationalist, signaling out the vision and courage that carried him through a politically hostile age. Approaching the Bauhaus founder from all angles, the author offers a poignant personal story, one that examines the urges that drove Euro-American modernism as a whole. MacCarthy was attending the Bauhaus exhibition at the Royal Academy, a landmark event intended to introduce postwar London to the seminal art school Gropius had founded 50 years earlier in Weimar. As it is known, the Bauhaus-trained artists –Germans, but also Swiss, Czechs and Hungarians– worked towards a sleekly modern “international” aesthetic in service of a “total work of art” in which buildings and their meanings were conceived as a whole entity. Here was a rational, functional and above all integrated design for living.

In the history of 20th-century design, it is a commonplace to fall into the old trap of believing that modernists valued ideas and form –and more particularly ideas about form– over living, breathing people with all their warm mess. In this brilliantly recuperative biography, Fiona MacCarthy provides an overall account of the context in those years. In short, she shows us the man behind the art. 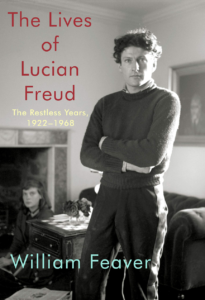 This is the first biography of the life of one of the most important, enigmatic and private artists of the 20th century. Drawn from almost 40 years of conversations with the artist, letters and papers, it is a major work written by a well-known British art critic William Feaver. Lucian Freud (1922-2011) is one of the most influential figurative painters of the last century. His paintings are in every major museum and many private collections here and abroad. William Feaver’s daily calls from 1973 until Freud died in 2011, as well as interviews with family and friends were crucial sources for this book. Freud worked day and night energetically, but his circle was broad including not just other well-known artists but writers, bluebloods, royals in England and Europe, drag queens, fashion models gamblers, bookies and gangsters. Fierce, rebellious, charismatic, extremely guarded about his life, he was witty, mischievous and a womanizer. It begins with the Freuds’ life in Berlin. Sigmund Freud was his grandfather and Ernst, his father was an architect. In London in his twenties, his first solo show was in 1944 at the Lefevre Gallery. Around this time, he was introduced to Virginia Woolf and also Dylan Thomas; he was also meeting Sonia Orwell, Cecil Beaton, Auden, Patrick Leigh-Fermor and the Aly Khan, and his muse was a married femme fatale, 13 years older, Lorna Wishart. But it was Francis Bacon who would become his most important influence and also the painters Frank Auerbach and David Hockney. This is a brilliantly researched and well written book. 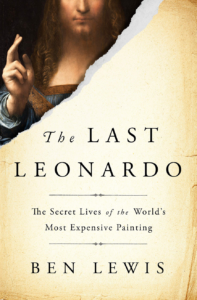 Tittle: The Last Leonardo: The Secret Lives of the World’s Most Expensive Painting

This is a passionate and exquisitely written book: Da Vinci’s “The Salvator Mundi” has temporarily disappeared. Lost and hidden for so long, the masterpiece is now back again in the public world. In September of last year, two weeks before the scheduled unveiling of the painting in its new home, the event was abruptly cancelled. A press release promised further information, but none has been forthcoming: an unexpected chapter of silence, which the ghost of Leonardo might just be enjoying. An epic quest exposes hidden truths about Leonardo da Vinci’s Salvator Mundi, the recently discovered masterpiece that sold for $450 million and might not be the real thing. In 2017, Leonardo da Vinci’s small oil painting the Salvator Mundi was sold at auction. In the words of its discoverer, the image of Christ as savior of the world is the rarest thing on the planet. Its $450 million sale price also makes it the world’s most expensive painting. For two centuries, art dealers had searched in vain for the Holy Grail of art history: a portrait of Christ as the Salvator Mundi by Leonardo da Vinci. Many similar paintings of greatly varying quality had been executed by Leonardo’s assistants in the early sixteenth century. This is a book about the history of this valuable painting, and the reader will learn a lot in carefully reading it.