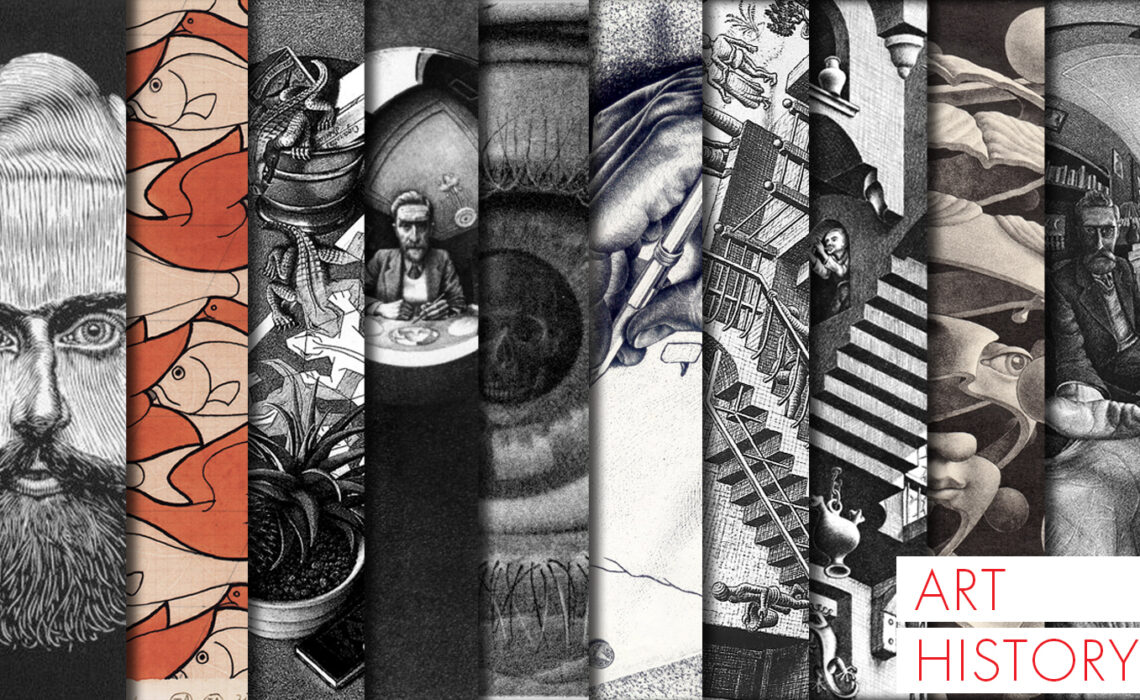 Maurits Cornelis Escher is one of the most recognizable artists for his spatial-temporal paradoxes. Born in Leeuwarden in 1898, his works fuse architecture with painting to give rise to optical illusions, utopian worlds and abstract spaces. Douglas Hofstadter described him as “The creator of some of the most intellectually stimulating drawings of all time. Many of them have as their root paradox, illusion or double meaning”. For the American philosopher, there is more to Escher’s drawings than symmetry: there is an underlying idea executed in an artistic way. In order to commemorate the anniversary of Escher’s death (March 27, 1972), we remember 10 of his most symbolic works. 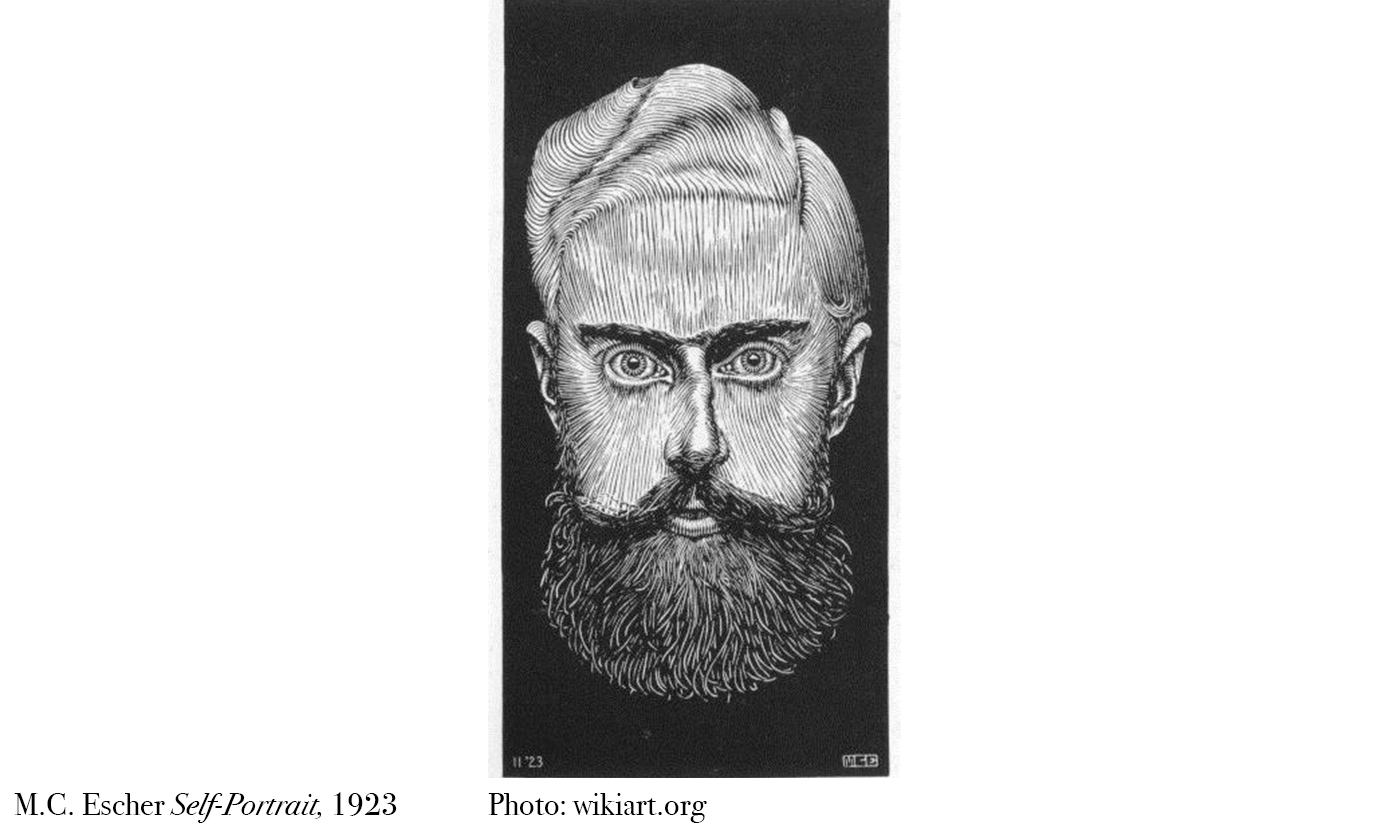 1) Self-Portrait (1923)
When the youngest member of the Escher family decided to drop the architecture classes, he received the support of Master Samuel Jesserun of Mesquita to continue his training. Escher lived in Arnhem, Italy, Switzerland and Granada. However, it was in the Alhambra, the palatine city, where he was inspired to create his ornamental style; he also took decorative details, patterns and geometric figures from the mosaics on the walls of Generalife (Granada) and the Mosque of Cordoba (Cordoba). During the Second World War, Baarn became his home; his artistic interests shifted from landscaping to the introspection of the human mind.
Image: https://www.wikiart.org/es/m-c-escher/self-portrait-2 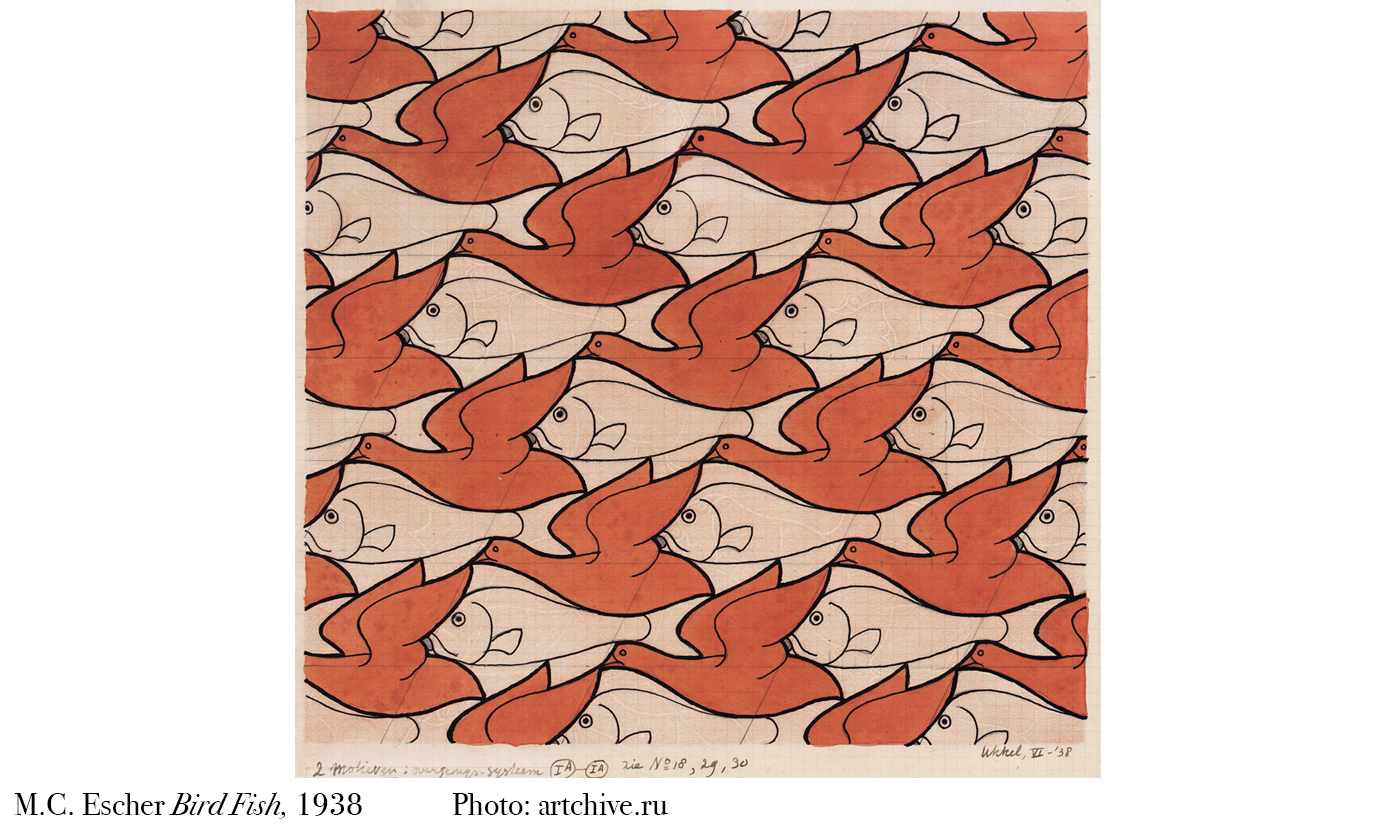 2) Bird Fish (1938)
The engraver made about 448 lithographs, woodcuts and about 2000 sketches. Coming from the Netherlands and skilled with his left hand as Toulouse Lautrec , Leonardo da Vinci and Paul Klee, he worked as a book illustrator, designer of carpets, banknotes, murals and stamps. Escher is a virtuous figure difficult to classify because his works hover between currents such as Op-art, realism, cubism and expressionism.
https://artchive.ru/es/escher/works/200117~Bird_fish_No_22 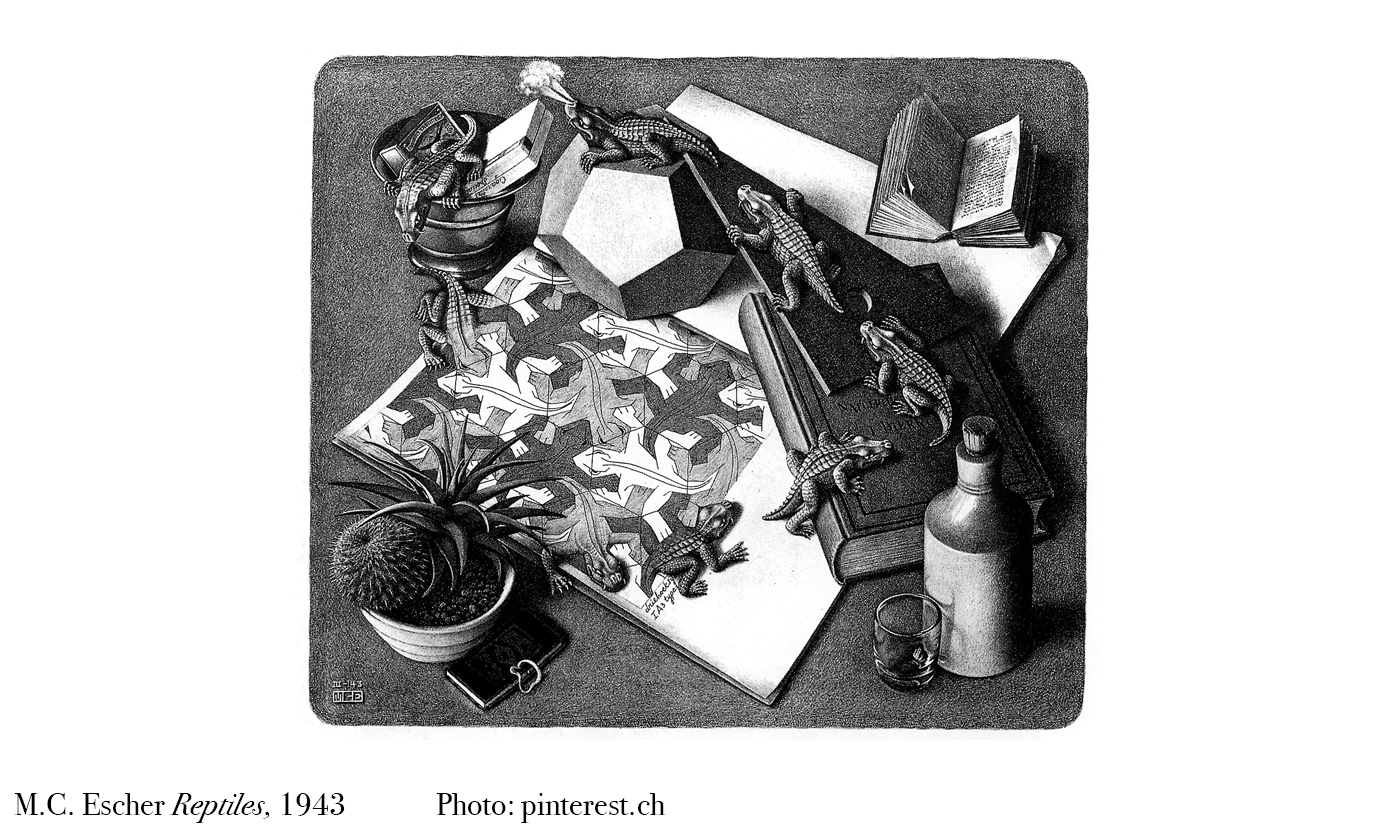 3) Reptiles ( 1943)
After the end of the war in Europe, he managed to finance his creations and to have his own workshop to print commissioned works. Reptiles is a lithograph that deals with a visual game of tessellation of lizards that come to life and leave the paper to enter again. Since then his paintings have aroused multiple interpretations, many of them related to dreams. The mathematical patterns and infinite dimensions of this creation illustrated the cover of the first album of the British band Mott the Hoople in 1969.
https://www.pinterest.ch/pin/7107311885119962/?amp_client_id=CLIE NT_ID(_)&mweb_unauth_id={{default.session}}&from_amp_pin_page=tru e 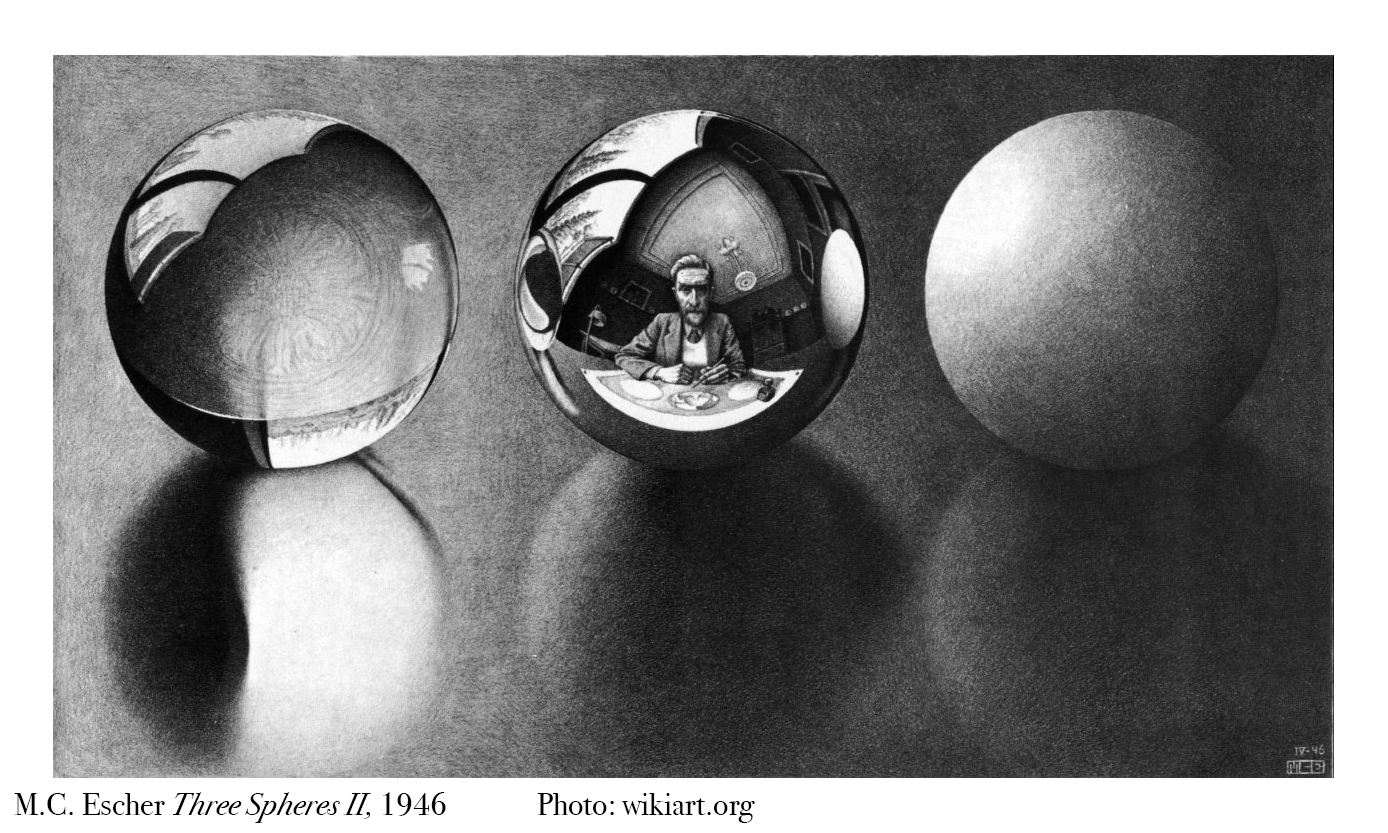 4) Three Spheres II (1946)
This creation belonging to the Museum of the Hague (De Haag) shows three spheres set on a flat surface. The sphere on the left is transparent, while the one in the middle reflects Escher drawing. Sunflower was the gallery where he mounted one of his first exhibitions in 1924. He later exhibited his work in Amsterdam, Rome, and finally in Chicago. Nonza (1934) received third prize in the Contemporary Printmaking Exhibition at the Art Institute of Chicago.
https://www.wikiart.org/en/m-c-escher/three-spheres-ii 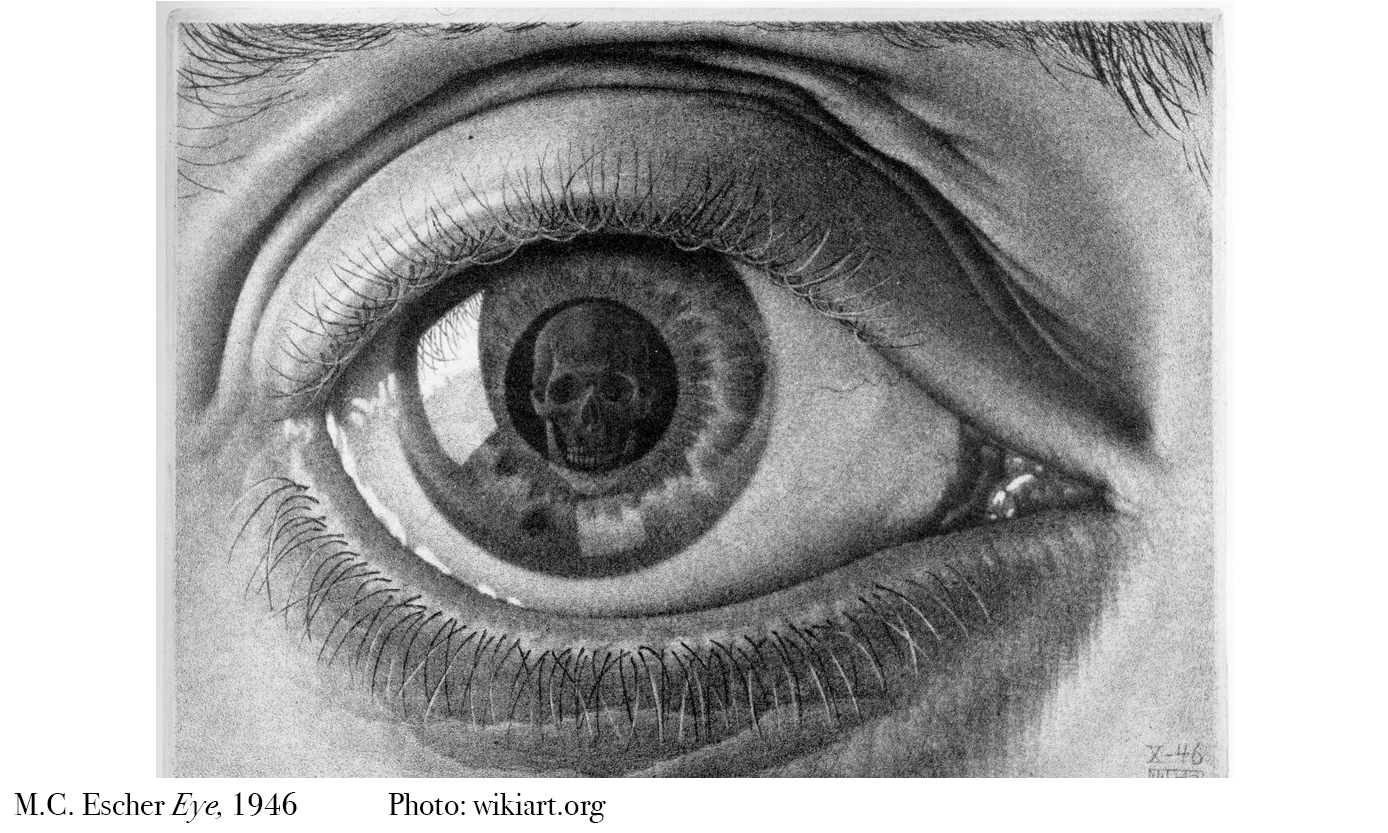 5) Eye (1946)
This mezzonit created with the advice of Jan Poortenaar (Amsterdam, 1886 – Naarden, 1958) and WG Hofker ( The Hague, 1902 – Amsterdam, 1981) is part of a unique series of 8 prints made by Escher. “As the viewer always sees himself in the eye that is looking, I decided to show a skull reflected in it. As a variation on the prints with reflecting spheres. Because we are all forced to look at death, whether we like it or not. Or it looks at us,” wrote the artist after he made it.
https://www.wikiart.org/en/m-c-escher/eye 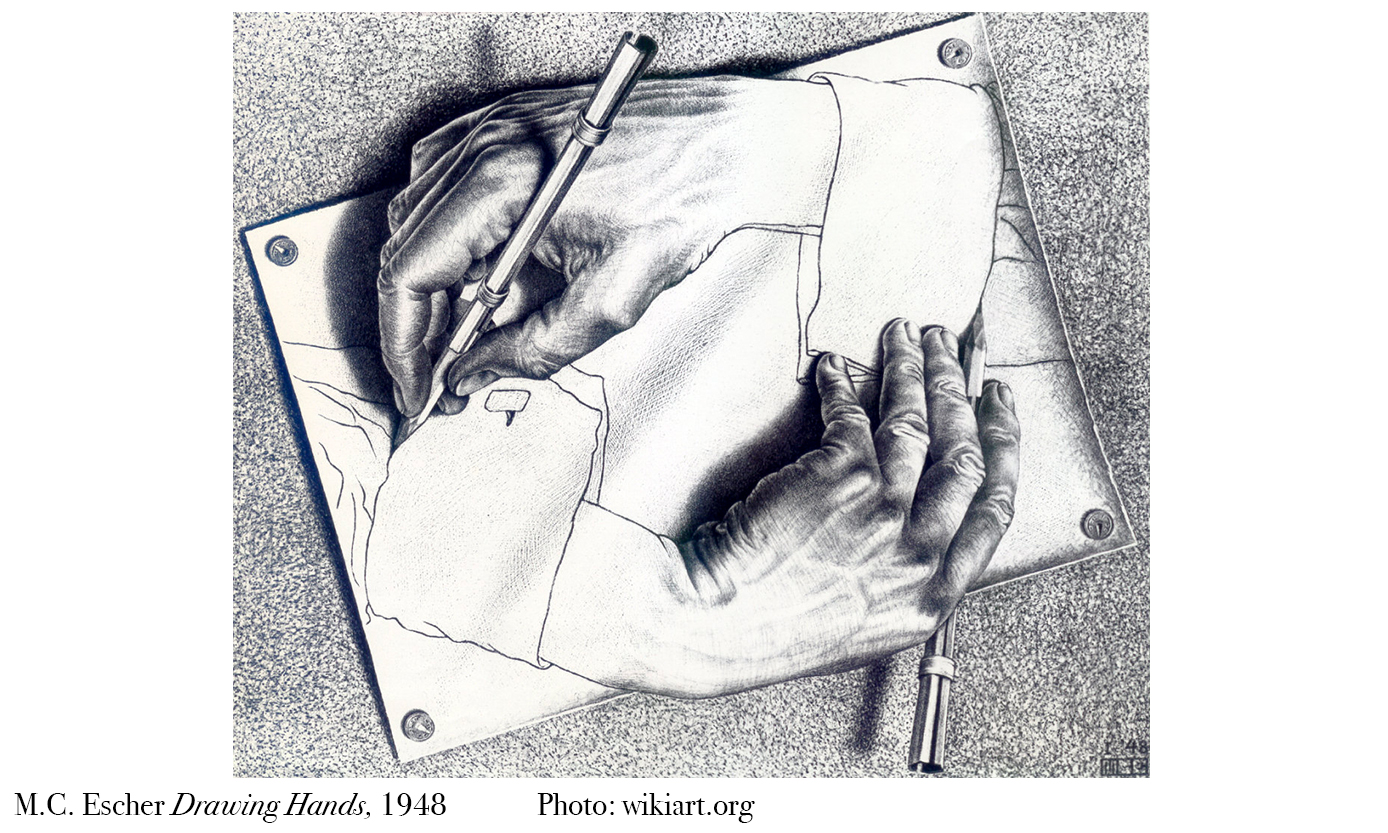 6) Drawing Hands ( 1948)
There are at least 11 lines of mathematical and scientific research planned by Escher. Symmetry or asymmetry in tessellations, crystallography in colours, metamorphosis when filling whole surfaces or algorithms when creating patterns based on squares, to mention a few. The game of artistic creation has aroused the curiosity of many scholars by being related to computer programming codes: in this piece one hand draws on a paper another hand that, at the same time, is drawing at first. This paradoxical system repeats itself automatically. There is no beginning or end.
https://www.wikiart.org/es/m-c-escher/drawing-hands 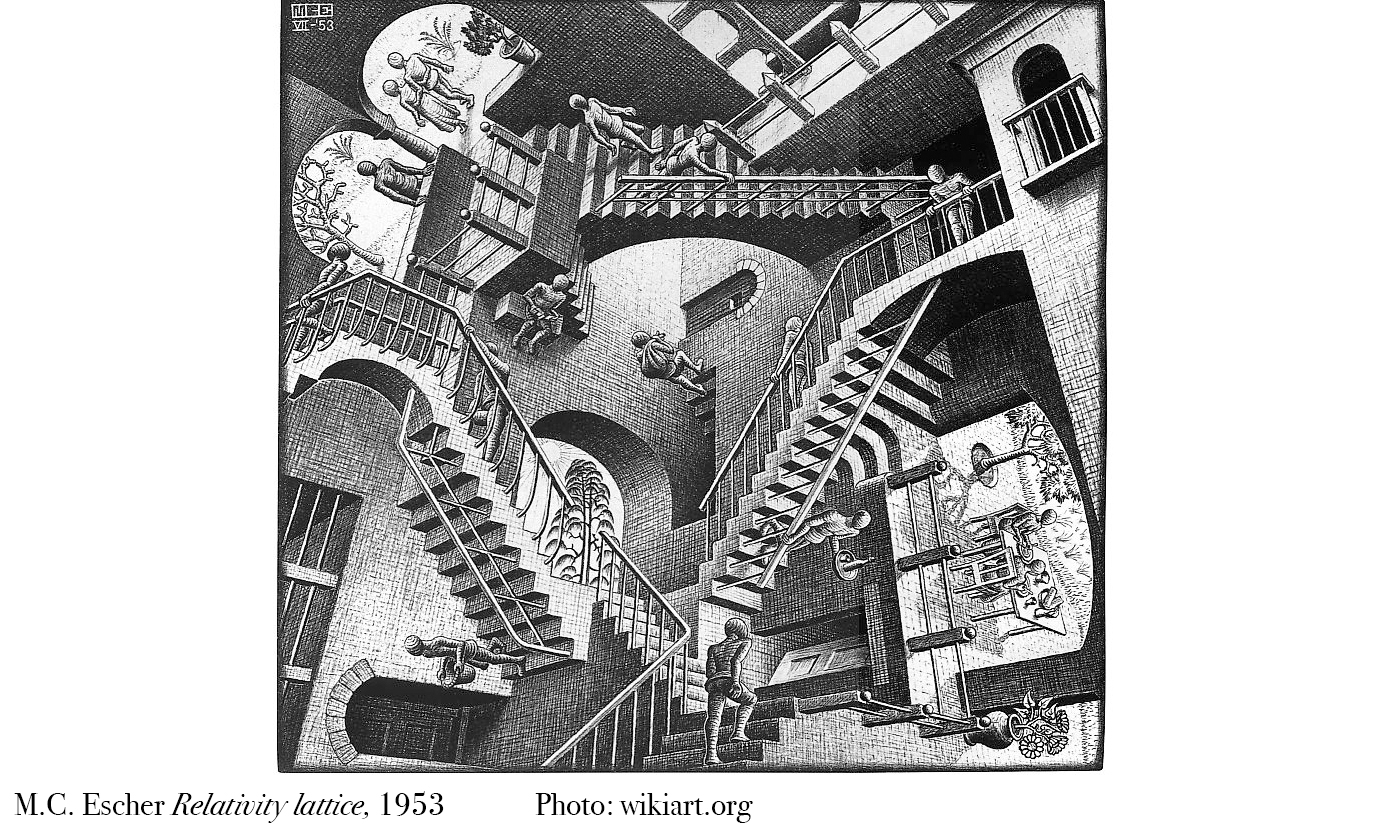 7) Relativity lattice (1953)
4444 is the name of the asteroid that was named in 1985 after the Dutch author who explored such topics as gravity, relativity and architectural construction. This lithograph reflects two worlds in which the laws of gravity do not exist and the possibilities of transition are infinite. Considered one of Escher’s best known works, the image has been a source of inspiration in popular culture: it is one of the settings of the film The Labyrinth , starring David Bowie; it is also included in Andrew Lipson’s Lego version, in a commercial for Volkswagen or in D.B. Johnson’s Palazzo Inverso.
https://www.wikiart.org/es/m-c-escher/relativity-lattice 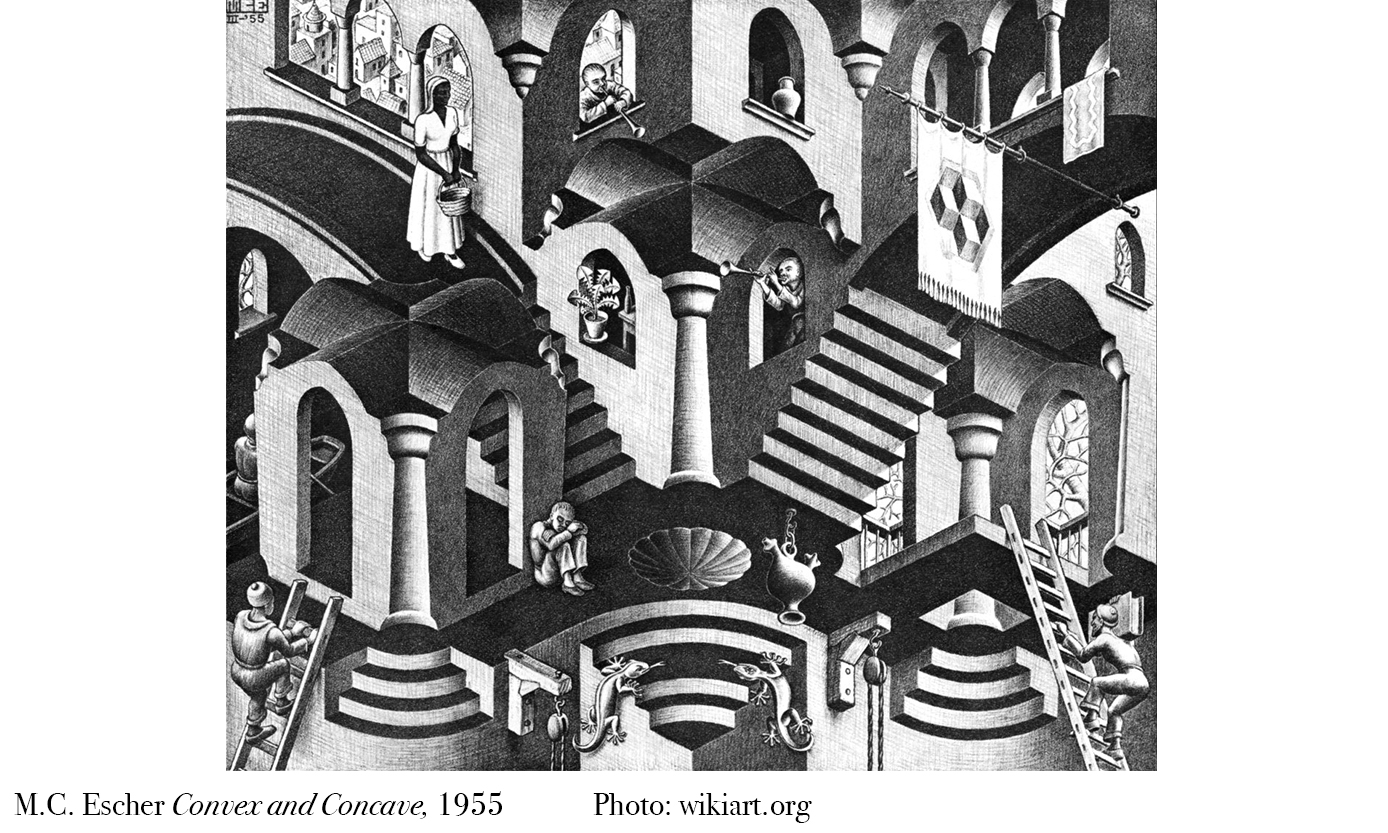 8) Convex and Concave (1955)
Impossible worlds made Escher appear in magazines like The Studio , Time, Life. In this work he deals with some of those worlds that, created from two fixed  structures, hardly make sense as a unit. It is no surprise that art historian E. H. Gombrich (Vienna, 1901 – London, 2001) wrote about his work in the Saturday Evening Pos t in 1961.
https://www.wikiart.org/en/m-c-escher/convex-and-concave 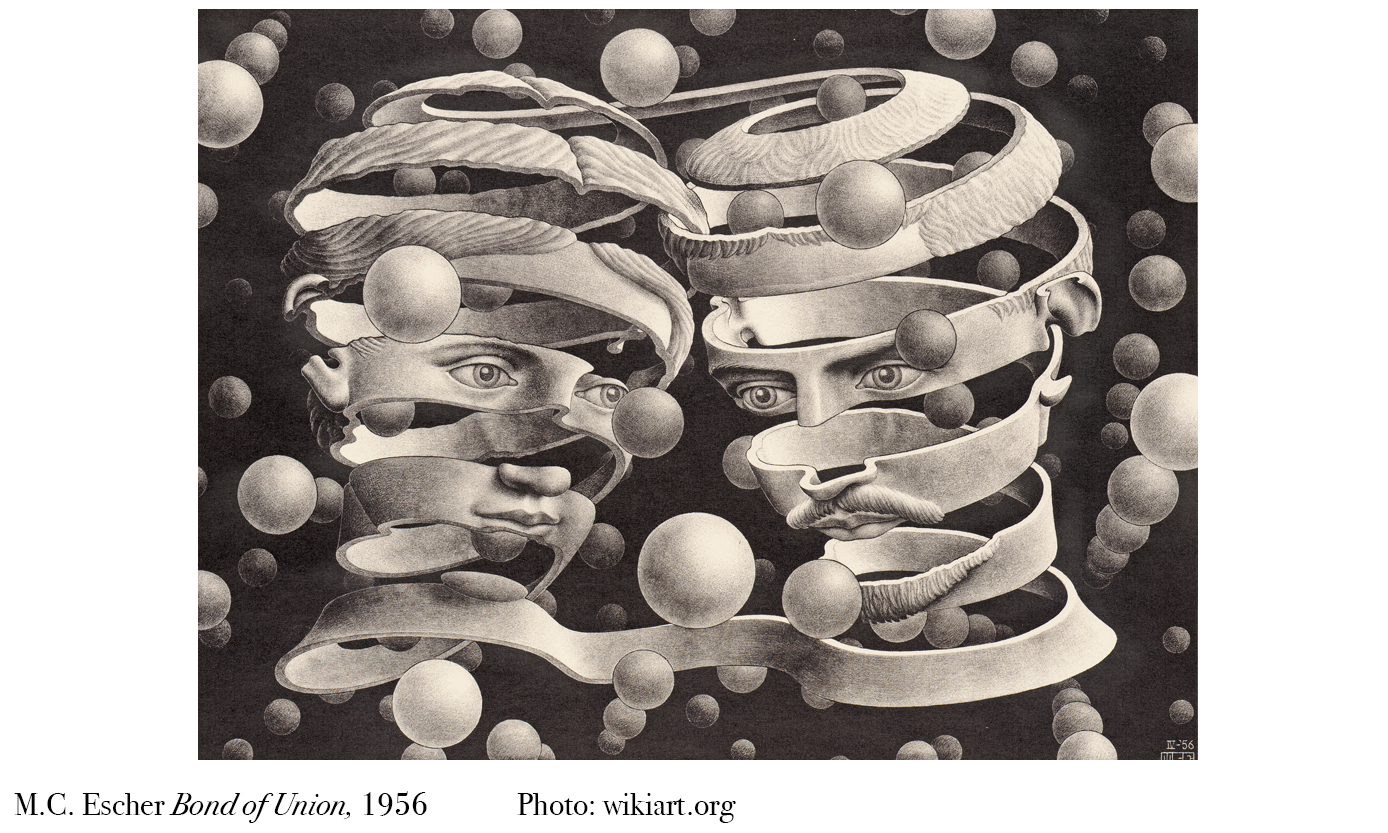 9) Bond of Union (1956)
Is one of the most famous works that combines the observation and symbolism of the elements that intersect and complement each other. Escher liked to tell it like this: “As an endless band that intertwines the two fronts, it represents the unity of the dual. The impression of corporeality is reinforced by spheres that float in front, behind and within the hollow faces”. A year before this print was made, the engraver was awarded the Hilversum Culture Prize (1965).
https://www.wikiart.org/en/m-c-escher/bond-of-union 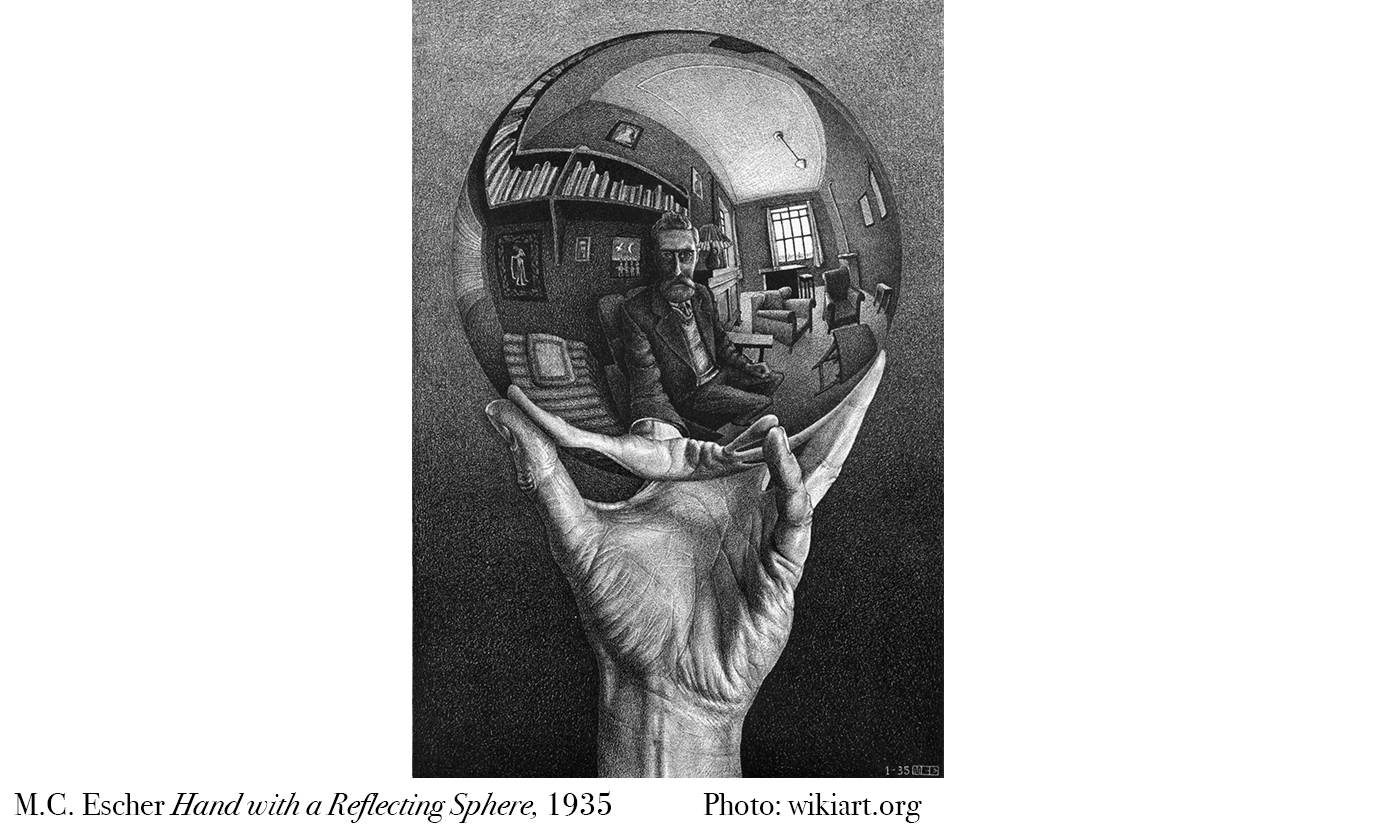 10) Hand with a Reflecting Sphere (1935)
This creation could have been the inspiration of Mexican artist Roberto Montenegro , who has used this technique for works such as Self-Portrait in a Crystal Ball (1953). Escher’s most famous self-portrait allows the viewer to get to know his studio through an extremely attractive visual paradox reminiscent of Velázquez and his Meninas. Escher (Leeuwarden, 1898 – Hilversum, 1972 ) strove all his life to continue printing his images, although not necessarily to create new worlds. It is estimated that the last piece he made was a woodcut called Snakes (1969).
https://www.wikiart.org/es/m-c-escher/hand-with-reflecting-sphere